Some states that raced to reopen let businesses write their own rules, documents show 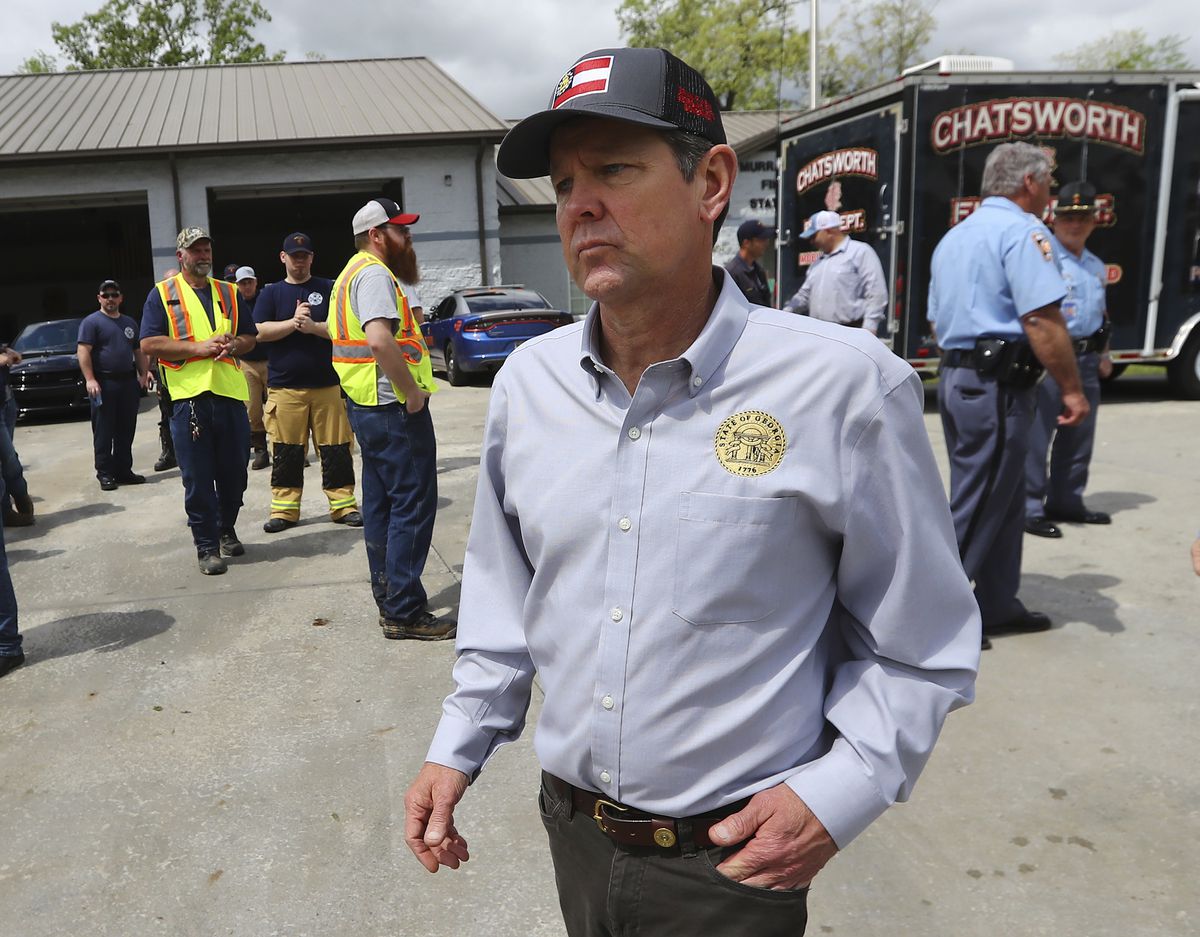 Five days after Georgia’s stay-at-home order expired, setting gyms, restaurants, hair and nail salons and other businesses on a quick course to reopen, a lobbyist for the state’s chamber of commerce emailed top aides to Brian Kemp, the Republican governor.

In the May 5 email, the lobbyist, David Raynor, asked the governor's aides, including his chief of staff and executive counsel, to prioritize legal protections for businesses if workers or customers were to contract the coronavirus. Kemp's lawyer, David Dove, replied within five minutes, beginning with an informal salutation, "Hey man," and strategizing about how to accomplish the group's aim.

The email correspondence, released through a public records request, shows how business networks and industry organizations helped write the rules of the pandemic response in some of the places that were the last to impose restrictions and the first to ease them. It also sheds light on the thinking of governors who have pledged not to reverse course on reopening, even as coronavirus cases spike in their states.

Among those remaining steadfast are Kemp and his Republican neighbors, including Govs. Henry McMaster of South Carolina and Ron DeSantis of Florida, who preside over tourist-powered economies pummeled by the virus. "Businesses simply can't be closed indefinitely," McMaster said last month.

But moves to throw open the doors with the virus still raging help explain recent surges in these states, epidemiologists say. On Wednesday, Georgia hit a seven-day new case average high of 2,808 cases, as did Florida with a new weekly average of 9,255 cases.

"We opened up too quickly," said Harris Pastides, an epidemiologist and former president of the University of South Carolina, who served on McMaster's task force. Of the group's deliberations, Pastides said, "There's no doubt that the voices of business were prominent."

Kemp was so focused on jump-starting business activity, meanwhile, that he was rebuked even by President Donald Trump - a staunch advocate of reopening - for moving too quickly.

The sway of business interests extends beyond "safe harbor" from coronavirus lawsuits - a central public cause of business groups that critics say invites risky behavior and constrains workers who get sick. In Georgia, the governor's top aides were also inundated by private appeals from corporations and conservative nonprofit organizations, email records show.

Hair restoration. Hunting. Hamburgers. All were cast, in requests to Kemp's office, as engines of economic opportunity that would sputter under shutdown. The language ultimately included in Kemp's shutdown order - authorizing the "minimum necessary activities to maintain the value of a business," a looser requirement than was set forth by other states - left many businesses to decide for themselves what was necessary, said state Rep. Bob Trammell, a Democrat and the minority leader of the Georgia House. The result, he said, was that the state "never really shut down."

In South Carolina, the guidelines for reopening the hospitality industry were crafted by the Restaurant and Lodging Association, officials acknowledged."In short, yes," said Brian Symmes, a spokesman for McMaster, when asked whether an online document emblazoned with the lobbying group's logo reflected the official policy of the state.

And in Texas, corporate executives and business leaders outnumbered physicians and infectious-disease specialists about eight to one on the "strike force" advising Republican Gov. Greg Abbott, according to a list of participants. "Where were the voices telling him prevention measures were necessary?" asked Diana Cervantes, an epidemiologist at the University of North Texas.

John Wittman, a spokesman for Abbott, disputed the criticism, pointing to several health experts on the advisory committee.

But Jeffrey Koplan, former director of the Atlanta-based Centers for Disease Control and Prevention, said the reopening plans pursued by these states, which did not square with guidelines issued by the White House, made clear that economic objectives triumphed over public health.

"Experts could not have been more explicit - don't loosen up on this too soon or there will be a serious price to pay," said Koplan, now vice president for global health at Emory University. "Whom you choose to get your advice from makes a big difference."

As Texas hit a new seven-day average case high of 7,500 on Wednesday, the mayor of Houston ordered the cancellation of the Texas Republican Party's convention scheduled for next week as the city copes with one of the nation's worst outbreaks.

Across the country, moves to reopen the economy before containing the virus offered a lesson in "how the political system accommodates the needs of business," said Paul Ryan, vice president of policy and litigation at the watchdog group Common Cause.

Trammell, the state lawmaker in Georgia, said the effort to shield businesses from coronavirus-related lawsuits was a case in point - a measure, he said, "exclusively concerned with keeping businesses safe from people."

The email records show how responsive Kemp's office was to the influential business network, which was in frequent communication with top aides to the governor, a former businessman. The correspondence also illuminates how liability protections - which Senate Majority Leader Mitch McConnell, R-Ky., has vowed to push at the federal level - have gained currency in numerous states, whether in the form of executive orders or legislation.

In the May exchange, Kemp's attorney asked the chamber's lobbyist whether legislation to shield businesses was required, and whether he had a proposal to protect those acting in "good faith" from a wave of lawsuits that could crash down on them for reopening as the coronavirus continued to spread.

"The structure that the Chamber and I put together initially is largely the structure that got adopted," the attorney, William Custer, said in an interview. Raynor, the chief public affairs officer for the Georgia Chamber of Commerce, commended lawmakers for approving the liability protections, noting in a statement: "Covid-19 threatens not only the health of Georgians but also their livelihood."

Candice Broce, a spokeswoman for Kemp, said the legislation, approved last month, was undergoing legal review and declined to comment further on the email correspondence. She also declined to address the balance between public health and economic imperatives, saying the governor had already spoken about the issue.

State Sen. Chuck Hufstetler, a Republican and a sponsor of the measure, said the liability shield was temporary - set to expire next summer - and designed to formalize steps set out in the governor's emergency declaration. He also said some business groups had wanted even more sweeping protections.

In South Carolina, the hospitality industry got virtually everything it wanted, said Bobby Williams, chair of the state Restaurant and Lodging Association's board. But he has grown wary of the hands-off approach his organization once championed - and of the lenient reopening recommendations it crafted with the "input," he said, of the state's health and tourism departments.

"Things are a lot more delicate now than they were when we first thought to reopen the restaurants in May," he said.

He wishes the CDC had been more adamant and mandated masks, he said, noting that he had just visited North Carolina, where Democratic Gov. Roy Cooper has required the use of face coverings statewide. He said that approach might be preferable to the patchwork of rules in South Carolina.

"I hate to say this thing has turned political," said Williams, who co-owns the Southern restaurant chain Lizard's Thicket.

Political schisms were also evident in the reaction to Kemp's moves in Georgia, which, like South Carolina, recorded record hospitalizations this week of people with covid-19, the disease caused by the virus. When the governor announced that he would reopen the state's economy in late April, a move denounced by the mayors of the state's largest cities, he received encouragement from the Georgia Center for Opportunity, a conservative think tank whose vice president of public policy, former Georgia state representative Buzz Brockway, wrote, "We applaud Governor Kemp's decisions during this time of crisis."

Kemp also received opposing advice, including from the United Food and Commercial Workers International Union, which in April asked him to "require masks for all retail food customers, food vendors, and workers in meatpacking plants, food processing facilities, and grocery stores."

"The science is clear," the union wrote in an email.

Kemp has recommended masks but not required them.

For every message that arrived urging the governor's office to take heightened precautions against the coronavirus, however, there were competing efforts to create exceptions and ease restrictions.

In late March, major trade associations - from the National Association of Home Builders to the Retail Industry Leaders Association - bombarded the governor's office with requests to be designated as essential.

As the governor began to lift restrictions in April and early May, he faced pressure to reassure economic juggernauts that the state would remain open for business. A lobbyist for an Atlanta convention center asked for a "quote and/or verbiage from our governor" promising that the state would be able to host the International Woodworking Fair in August.

"The economic impact of this show to the state of Georgia has been $100M in recent past . . ." the lobbyist wrote. "Needless to say, we need IWF to come back this year!"

Those who voiced opposing views acknowledged that they were outmaneuvered if not outnumbered. Writing to express her "strong opposition" to reopening in April, a small-business owner in Atlanta said her position was shared by "a large if not majority of the people of Georgia."

“Perhaps not friends or influencers of this governor, or business leaders that have deep pockets, but the people that value human life,” she wrote.