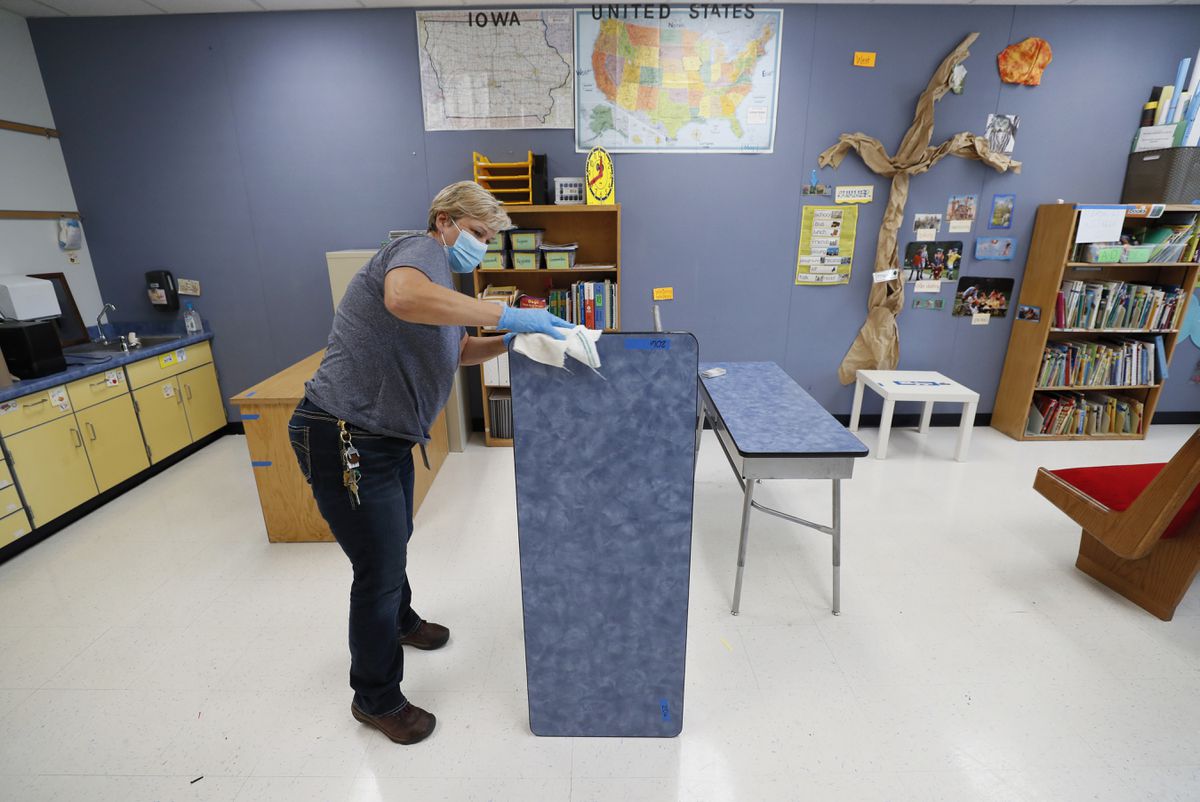 In just a matter of weeks, tens of millions of children will start a new school year, and what that will look like has become the nation’s thorniest political and epidemiological issue. School officials have to figure out how to resume schooling while limiting the risks to children, their teachers, school staffers and their communities.

This pivotal moment in the coronavirus pandemic comes as scientists are still trying to understand precisely how the virus affects children and how children affect the spread of the virus. This dicey decision point has generated tension between President Donald Trump and his own public health experts at the Centers for Disease Control and Prevention, with Trump saying the CDC is "asking schools to do very impractical things" to allow classes to resume.

The reopening of schools is likely to be halting and improvisational. It could be marked by setbacks. There is no proven strategy for the remobilization of 56.6 million K-12 students amid a pandemic like this one.

"It's not going to be easy because we've never done it before," Anthony Fauci, director of the National Institute of Allergy and Infectious Diseases, said Thursday in an interview with The Washington Post. "This is uncharted waters - always remembering the primary issue is the safety and welfare of the children as well as the teachers who are going to be interacting with the children."

Children are clearly at low risk of serious illness from covid-19, the disease caused by the virus. Research suggests they're also less likely to get infected to begin with. But it's unclear to what extent they can still transmit it to each other and to vulnerable adults - such as their teachers or family members.

Much of the scientific understanding of how the coronavirus affects children is provisional. A study by researchers in the United Kingdom published last month found that children are only about half as likely as adults to become infected with the virus. Another study, from the University of California at Berkeley, did not see any significant effect on the community spread of coronavirus from the closing of schools in March.

But scientific research on children and covid-19 has not been nearly as extensive as research on older people, because there haven't been nearly as many sick children to study, and children are rarely tested as part of disease surveillance programs. Deborah Birx, coordinator of the White House coronavirus task force, said Wednesday the age group with the lowest rate of testing is children younger than 10.

"I think Americans have done a great job in keeping infection rates low in children," she said.

A research effort funded by the National Institutes of Health is enrolling 6,000 people from 2,000 families to try to better understand the dynamics of the disease across age groups, Fauci said.

"The data that is clear is that children do not get serious consequences of infection compared to adults," Fauci said. "That's a fact. Everything else is less secure. It is more anecdotal."

The anecdotal evidence, he said, is that children do not transmit the coronavirus to adults as readily as adults infect one another. But, he acknowledged, "the definitive study has not been done."

The pandemic has shown a clear pattern of discriminating by age. The CDC's provisional death toll from covid-19 stood at 112,000 on Wednesday - a figure officials acknowledge is likely an undercount - and of those deaths, 29 were among children under the age of 15. That compares with 37,247 deaths among people 85 and older. (A Post analysis shows more than 130,000 people in the United States have died from covid-19.)

Though epidemiologists agree that children generally dodge the worst of covid-19, the emergence of a rare but dangerous "multisystem inflammatory syndrome" in children has been linked to the virus. The syndrome, which can manifest in a variety of early symptoms such as fever and rash, shares some characteristics with Kawasaki disease, a rare illness that usually affects children under 5.

If left untreated, children can suffer lasting heart damage because of inflammation in blood vessels and arteries - though treatment has been largely successful. According to a study published in the New England Journal of Medicine, New York hospitals identified 15,515 cases of covid-19 among people under age 21. Of those cases, 95 presented with the multisystem inflammatory condition - fewer than 1 percent.

There is no formula for how to reopen schools safely, though school officials are developing strategies for keeping kids separated as much as possible. Many school districts are adopting "hybrid" plans with students alternating between in-school and at-home learning and attending class in shifts to allow more space between desks and fewer people in buildings.

Many rural districts, however, are planning full reopenings, knowing they may need to close if cases spike. It's unclear whether any districts will keep everyone at home.

The CDC has recommended that schools try to keep students six feet apart. That may be impossible for most schools if all students are present. Another recommendation is to have students eat lunch at their desk. Extracurricular activities could be eliminated.

One recent poll found that parents across the country are split down the middle on whether they want to send their children back to school. But the return of school - real school, in class - is broadly seen as a critical step toward returning the country, and its economy, to something approaching normalcy.

Since the onset of the pandemic, parents have been forced to balance work with home-schooling. They represent a large portion of the national workforce, which is already struggling with massive job losses and a pandemic-induced recession.

Distance learning has not gone well in much of the country. In Philadelphia, many students did not have computers, so the district directed teachers to use the time for review of material already taught. No new content was introduced, and students did not get grades.

In the District of Columbia, it took weeks to get most students the necessary technology to participate in distance learning, and even then teachers at low-income schools reported dismal attendance.

Keeping children at home carries its own risks, the American Academy of Pediatrics has said. Last month, the organization strongly recommended that schools try to reopen.

"Policies to mitigate the spread of covid-19 within schools must be balanced with the known harms to children, adolescents, families, and the community by keeping children at home," the group said.

"We have two not-great options. We're stuck in a very bad place right now in the U.S. with how many infections are going," said Sean O'Leary, a pediatrician who helped write the pediatric academy's guidelines.

He said the risk to schoolchildren from the coronavirus is in line with other respiratory viruses such as influenza. "It's not that kids don't get sick, but it's similar to other things we accept in our daily lives normally," said O'Leary, a pediatric infectious-disease specialist at Children's Hospital Colorado.

He said school districts have to accept there will be some infections and some outbreaks.

"It's not about risk elimination," he said. "It's risk mitigation."

In recent days, the Trump administration has stressed the academic and emotional downsides to keeping children out of school. Schools also provide mental health counseling, socialization and meals.

CDC Director Robert Redfield, speaking at a forum sponsored by the Hill, said Thursday that having schools closed "is the greater public threat to children than having the schools reopen."

Other infectious-disease experts have generally endorsed a reopening of schools in some fashion, but only with safeguards and mitigations. The virus, they note, is following its own path without regard for the pain and suffering it inflicts. Most people in the United States still lack immunity to the virus. Cases continue to surge in Southern and Western states.

"If we open up the schools and haven't really figured out how to control the virus adequately, it's not going to be that different from opening up the bars and restaurants, and the problem we've seen in the Sun Belt right now," said Jeffrey Shaman, an epidemiologist at Columbia University who has studied the spread of the virus throughout the pandemic.

Decisions on school reopenings will largely be made at the local level, and the map of viral spread is complicated, with ongoing spikes in coronavirus cases and hospitalizations in Arizona, Florida and Texas.

In response to a White House education summit this week, Arizona Department of Education superintendent Kathy Hoffman published a letter saying the discussion "did not reflect the magnitude or severity of Arizona's growing public health crisis."

Hoffman said her state must get covid-19 under control and emphasized that while the virus might not pose as much risk to children as it does to older adults, older adults are involved in a return to school, too.

But he left many big decisions to school districts, which he says can implement the state's recently released guidance as they see fit. If schools want to take students' temperature on the way in, they can - but it isn't required. If they want to have students eat lunch in their classrooms instead of a crowded cafeteria, that works, too.

Florida's Education Commissioner Richard Corcoran took a firmer stance Monday when he ordered schools to open five days a week when classes are scheduled to resume in August.

As with so many orders issued by states in response to the pandemic, this one may sew confusion, because local jurisdictions are deciding on their own approach. The Miami-Dade County School Board last week approved a multiphase plan that includes a mix of in-person and online learning. The plan asks parents to indicate whether they prefer their child to attend classes in a school building or online.

Wednesday, New York Mayor Bill de Blasio, a Democrat, announced his plan for reopening classrooms to the city’s more than 1 million public school students. That plan includes an all-remote option for those who want it. Families wanting in-person instruction will find that their children will probably spend just a couple of days each week in a school building.