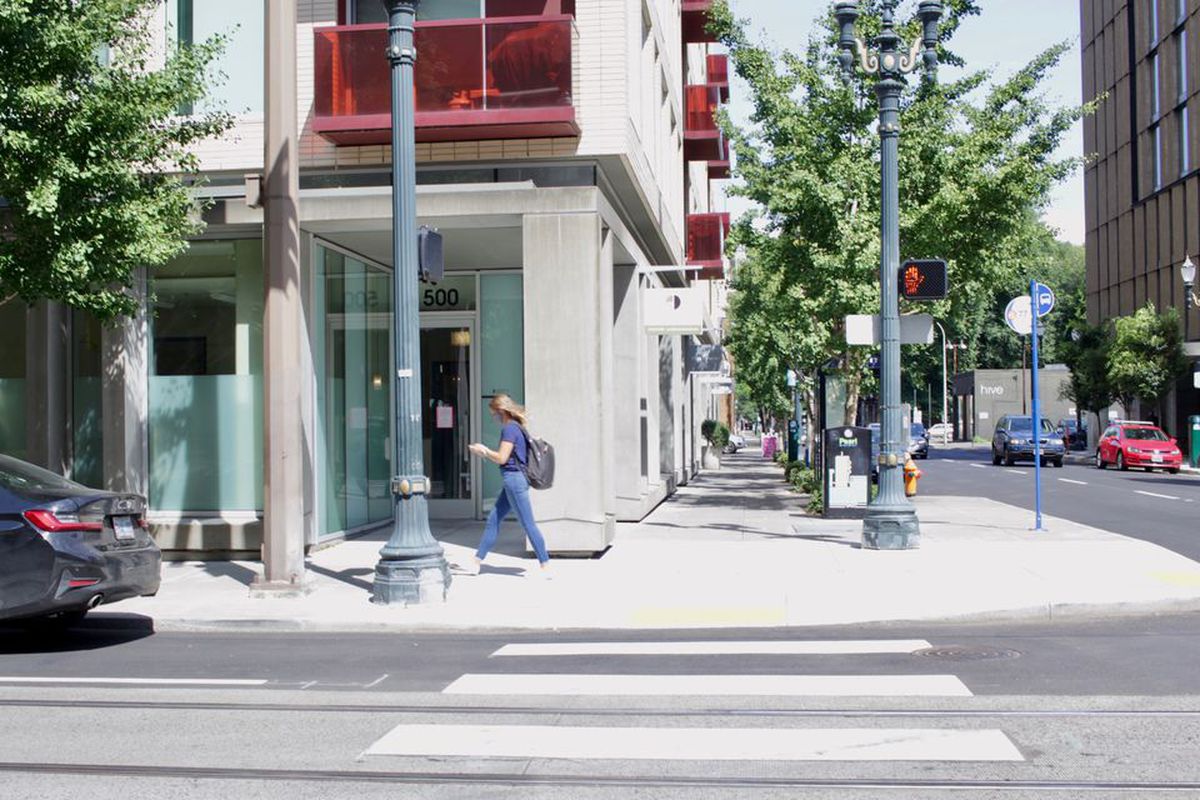 The tony Pearl District neighborhood where protesters rallied in front of Mayor Ted Wheeler's condominium shows is nearly devoid of any evidence a demonstration took place there save for graffiti on two crosswalks. (Eder Campuzano | The Oregonian)

The tony Pearl District neighborhood where protesters rallied in front of Mayor Ted Wheeler's condominium shows is nearly devoid of any evidence a demonstration took place there save for graffiti on two crosswalks. (Eder Campuzano | The Oregonian)

PORTLAND, Oregon -- As Cory Alexander and her daughter Nevaeh Belka stroll through downtown Portland, a mural catches the 9-year-old’s eye.

The wall of black plywood surrounding the Pioneer Place Apple Store is a memorial to Black Americans killed by police.

Nevaeh trots up the steps, faces her mother and raises a fist. Alexander, 46 and white, taps on her phone and takes a photo of her Black daughter.

“That’s what this is all about,” Alexander says.

But national media reports, particularly those published by right-wing outlets, suggest a vastly different version of how safe it is for children and families to stroll through downtown Portland.

Many people who live in Portland, Including Alexander, heard over the past few days from worried relatives in other states who feared that their loved ones in Portland might have been affected by fires or caught in police crossfire as they went about their day.

The images that populate national media feeds, however, come almost exclusively from tiny points in the city: a 12-block area surrounding the Justice Center and federal courthouse.

And they occur exclusively during late-night hours in which only a couple hundred or fewer protesters and scores of police officers are out in the city’s coronavirus-hollowed downtown.

Those events are hardly representative of daily life, including peaceful anti-racism demonstrations that have drawn tens of thousands of protesters, in a city of 650,000 people that encompasses 145 square miles.

The vast majority of Portland residents spend quiet home-bound lives on hushed tree-lined streets with coronavirus and its resulting economic catastrophe as the greatest threat to their well-being.

Portland has experienced weeks of daily protests since the death of George Floyd at the hands of Minnesota police.

The largest of them, involving thousands of people chanting and marching for racial justice and police non-violence, have been peaceful.

But almost like clockwork, tensions flare late at night between law enforcement officers stationed at the Justice Center and courthouse and a crowd of 20- and 30-something demonstrators, a small number of whom toss projectiles at police, shine lasers in their eyes or otherwise poke and prod officers to engage.

But they’ve also claimed, without presenting evidence, that protesters, in the words of Police Capt. Craig Dobson, “often” lob water bottles full of urine or feces as well as “large mortar-style fireworks that can kill people,” endangering officers.

Law enforcement officials claim demonstrators’ use of such objects have required them to deploy tear gas, foam-tipped projectiles and other munitions against the hundreds gathered to disperse the crowd.

Smaller skirmishes have broken out at a pair of police precincts in other parts of the city and the Portland Police Association headquarters in North Portland, where officials accused demonstrators of lighting a dumpster on fire in an effort to set the whole building ablaze.

The agency has not been able to corroborate its claim that the union building was at serious risk. Nevertheless, images and video of the event, as well as fires lit at the base of the city’s historic downtown elk fountain, have galvanized conservative media across the country.

One particular viewer, President Donald Trump, has vowed to crack down.

His agency provided news organizations with a list of “violence” protesters have engaged in, the bulk of which consisted of vandalism to federal property, primarily graffiti on the courthouse exterior.

Portlanders swiftly rebutted Wolf’s portrayal of the city as under siege from violent protests, posting mundane scenes from their neighborhoods.

Among images they shared:

A community garden in the Southwest Hillsdale neighborhood.

Elephants bathing at the Oregon Zoo.

Some even poked fun at national reporters, one of whom declared he was about to parachute in to “sort out what in the world is happening” in the Rose City.

The Oregonian/OregonLive spoke to nearly two dozen Portlanders and visitors downtown Friday as Wolf and other federal officials continued to characterize the city as lawless and under threat of constant riots.

Johnny Leyua, 18, was touring downtown and marveled at the mural in front of the Apple Store where Cory Alexander photographed her daughter.

“I would say that people here are doing it right,” Johnny Leyua said. “I think Portland is straight for the movement.”

He and his sister, Stephanie Leyua, 20, live in Salt Lake City. She’s retrieving a car from her ex and said she’s seen nothing but artwork filling the streets.

Stephanie Leyua caught sight of Wolf’s tweets at the Justice Center, which showed him chatting with police against the backdrop of graffiti he estimates will cost $5,000 to remove.

“Why didn’t he take any pictures of this?” Stephanie Leyua said, gesturing to the mural of Floyd, Washington and other Black people killed by police.

Although the Justice Center and federal courthouse are covered with angry graffiti decrying police, evidence of other demonstrations in the city are scarce.

For a couple of days, protesters rallied in front of Mayor Ted Wheeler’s condominium in a tony Northwest Portland neighborhood. Demonstrators tried to set up a police-free zone like the one protesters in Seattle set up in the Capitol Hill neighborhood in June.

But Portland police quickly dismantled the pallets and other debris blocking off the road.

Now, the only reminders of the demonstration are spray painted letters reading “Little Palestine” on one crosswalk and, on another, “PKAZ” — short for Patrick Kimmons Autonomous Zone, named after a Black Portlander killed by police.

With most Portlanders sticking close to home amid coronavirus, however, national TV coverage has been able to shape even some Portland residents’ sense of protests and police action taking place in their city.

Maria Magdalena, who lives in North Portland, said her view of the city’s protests has largely been that of boarded up businesses and police occasionally declaring riots.

She primarily speaks Spanish and typically catches newscasts on the local Univision affiliate.

“Why do they go after businesses?” she asked about protesters. “None of this is their fault.”

Katherine Sherman, a mother of three who attended a protest at Cleveland High Friday, also said she saw local news outlets focusing on vandalism and confrontations with police, which she said distracted from demonstrators’ larger messages against police brutality and systemic racism.

She wasn’t alone in her criticism.

In mid-June, editors at The Oregonian/OregonLive adjusted the way collections of photographs accompanying protest coverage appear on its website.

Readers pointed out that every morning report on the previous night’s demonstrations was rife images of cops in riot gear and protesters fleeing amid clouds of smoke, burying photographs of the larger numbers of Portlanders peacefully chanting, marching through city streets or rallying in parks.

Rather than publishing those collections in chronological order, which prioritizes the last images photographers collect, often of police clearing protesters out of downtown Portland, the news organization now manually reorders them to give readers a look at the totality of events of any given day’s protests.

As the national spotlight continues to shine on Portland, tensions have mounted between demonstrators and the federal police who patrol outside the courthouse.

The Trump Administration dispatched federal marshals and U.S. Customs and Border Patrol agents to protect the building from vandalism after Wheeler ordered city police to scale back their confrontations with demonstrators.

The move is largely seen as a campaign strategy on the president’s part as his approval ratings plummet and polls show him far behind presumptive Democratic nominee Joe Biden.

Earlier this month, a federal police officer shot a less-than-lethal munition at 26-year-old Donavan La Bella’s face while he was holding a speaker across the street from the Justice Center, sending him to the hospital with a serious head wound.

The incidents galvanized demonstrators and prompted local and national officials to call for an investigation.

Critics say the government’s slow response to requests for transparency and the national media’s focus on the most salacious moments of the city’s demonstrations prove both federal officials and national reporters care more about property damage than the physical injuries protesters sustain on the streets.

Portland officials’ claims that demonstrations against police brutality and systemic racism cost downtown businesses upward of $23 million and video of protesters toppling a statue of Thomas Jefferson at a high school in North Portland drew headlines across the country.

But follow-up reporting of a faulty business association survey that mischaracterized sales losses due to coronavirus-related closures as protest-related or the school district’s push to rename many of its buildings in a nod to the movement that led to the statue’s toppling haven’t spread beyond local media.

Neither have stories about the protesters volunteering to feed houseless Portlanders in downtown parks, a group local police removed from the parks in front of the federal courthouse ahead of Wolf’s visit.

Meanwhile, La Bella’s dry blood still stains the sidewalk across the street from the Justice Center.