An armed Black Lives Matter protester confronted a car that drove toward a march. The driver fatally shot him. 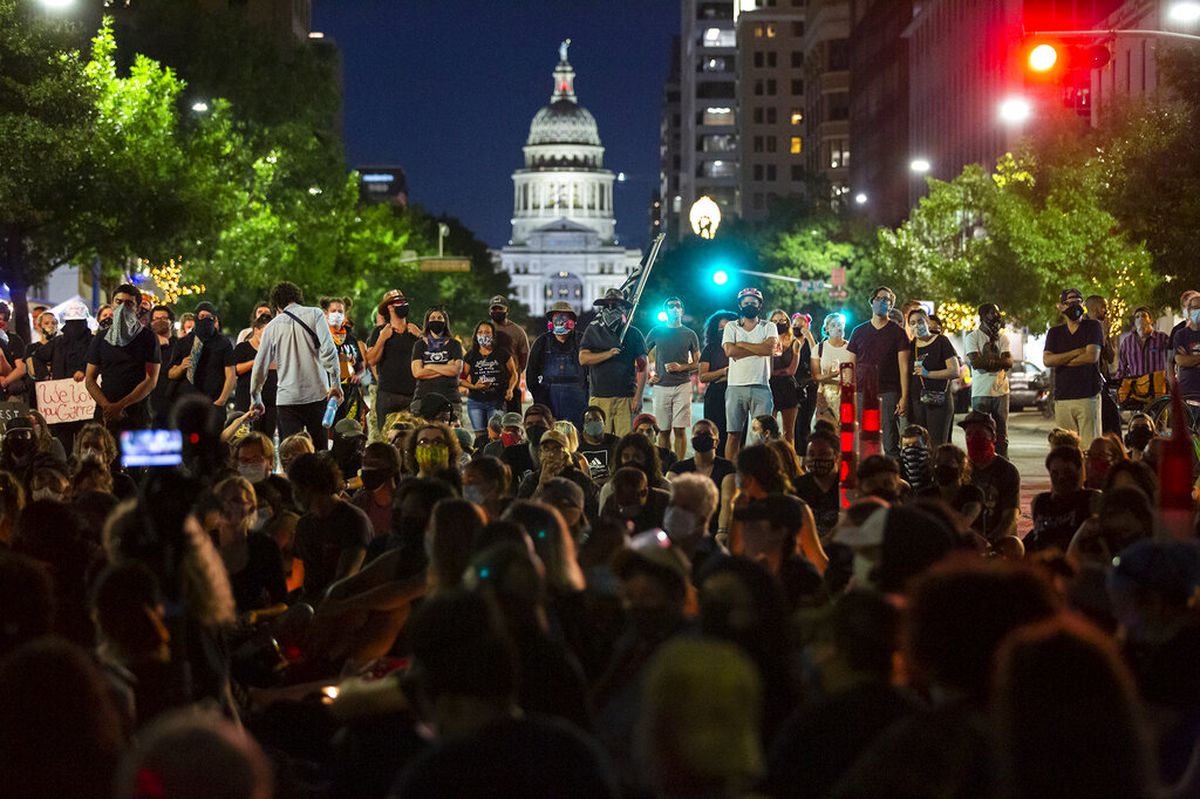 Hundreds of people gather for a vigil in memory of Garrett Foster on Sunday, July 26, 2020, in Austin, Texas. Police have identified Foster as the armed protester who was shot and killed by a person who had driven into a crowd at a demonstration Saturday against police violence. (Ana Ramirez/Austin American-Statesman via AP)

Hundreds of people gather for a vigil in memory of Garrett Foster on Sunday, July 26, 2020, in Austin, Texas. Police have identified Foster as the armed protester who was shot and killed by a person who had driven into a crowd at a demonstration Saturday against police violence. (Ana Ramirez/Austin American-Statesman via AP)

The protesters were crossing 4th Street on Congress Avenue in downtown Austin Saturday night when a motorist sped toward the crowd and laid on the horn. Most of the Black Lives Matter marchers scattered, but not Garrett Foster. The 28-year-old white man wearing a military green T-shirt, baseball cap, black bandanna and an AK-47 type assault rifle strapped across his chest approached the driver’s side window.

Seconds later, the driver fired five shots and sped off, leaving Foster to bleed out.

On Sunday, Austin police said they had interviewed the driver, who had turned himself in after fleeing the scene. The man had a license for his handgun and claimed that he fired after Foster pointed his weapon at the car. The police, who declined to identify the driver, released the man as they continue investigating.

"We are heartbroken over the loss of Mr. Foster last night," Austin Police Chief Brian Manley told reporters. "It is actively being investigated and ongoing in conjunction with the Travis County district attorney's office."

Foster's family on Sunday said he served in the military and described him as a man committed to social justice, who had peacefully protested almost every night over the past 50 days with his fiancee, an African American woman who is a quadruple amputee.

"He was doing it because he feels really strongly about justice and he's very heavily against police brutality, and he wanted to support his fiance," Sheila Foster told "Good Morning America Weekend" on Sunday.

Foster's death comes as more Black Lives Matter protesters are showing up armed to demonstrations nationwide, raising concerns about confrontations with police and armed counterprotesters. In Louisville on Saturday, hundreds of activists marched the streets of Breonna Taylor's hometown carrying assault rifles and demanding charges against the police officers who fatally shot her in March. The group was met with counterprotests from an armed white militia. Police, dressed in full riot gear, kept them apart.

In Texas, where open carry is legal, it's not uncommon to see armed protesters.

But Foster only recently began carrying a firearm to the protests against police brutality, where he accompanied his fiancee, Whitney Mitchell, who uses a wheelchair. In an interview earlier on Saturday with Hiram Gilberto Garcia, an independent journalist who was streaming the protest on Periscope, Foster said he started to bring the weapon after his roommate was arrested for protesting.

"They don't let us march in the streets anymore, so I got to practice some of our rights," he said. But Foster said he understood the limitations of having a weapon in these circumstances. "If I use it against the cops, I'm dead," he added.

Foster was pushing Mitchell's wheelchair on Saturday night when the driver turned into the crowd of protesters just before 10 p.m.

Investigators heard conflicting reports of what happened next, Manley told reporters on Sunday.

"His account is that Mr. Foster pointed the weapon directly at him and he fired his handgun at Mr. Foster," Manley said of the driver.

"He was not aiming the gun or doing anything aggressive with the gun," Michael Capochiano, a witness, told the New York Times. "I'm not sure if there was much of an exchange of words. It wasn't like there was any sort of verbal altercations. He wasn't charging at the car."

Sheila Foster told "Good Morning America" that the motorist shot her son three times before driving off. Noticing he was getting away, a witness pulled out a handgun and shot at the car as it drove away.

Minutes later, the man called 911 and turned himself in, saying he had "just been involved in a shooting and driven away from the scene," Manley said.

Officers also brought in the second gunman who shot at the car as it sped off. Both were released from police custody after giving their statements and officers seized the handguns as evidence. Manley also stated that they both had a license to carry.

A vigil was held for Foster Sunday evening and a memorial of flowers and candles was placed at the corner of 4th and Congress. The crowd chanted, "Say his name . . . Garrett Foster." And a GoFundMe page has raised over $100,000 as of early Monday.

Foster's sudden death has been especially traumatizing for Mitchell, her mother, Patricia Kirven, told the Dallas Morning News. The couple got engaged when they were 18, a month before an infection caused Mitchell to lose her arms and legs. Friends of Mitchell who witnessed the incident told Kirven that Foster had jumped in front of her, fearing she was a target.

"They thought the person was aiming at her because she is a sitting duck," she said.

After Foster was shot, Mitchell called her mother frantically telling her that he was shot.

“She physically is OK, but mentally she is not,” Kirven told the Morning News. “‘Inconsolable’ is the only word I can think of.”