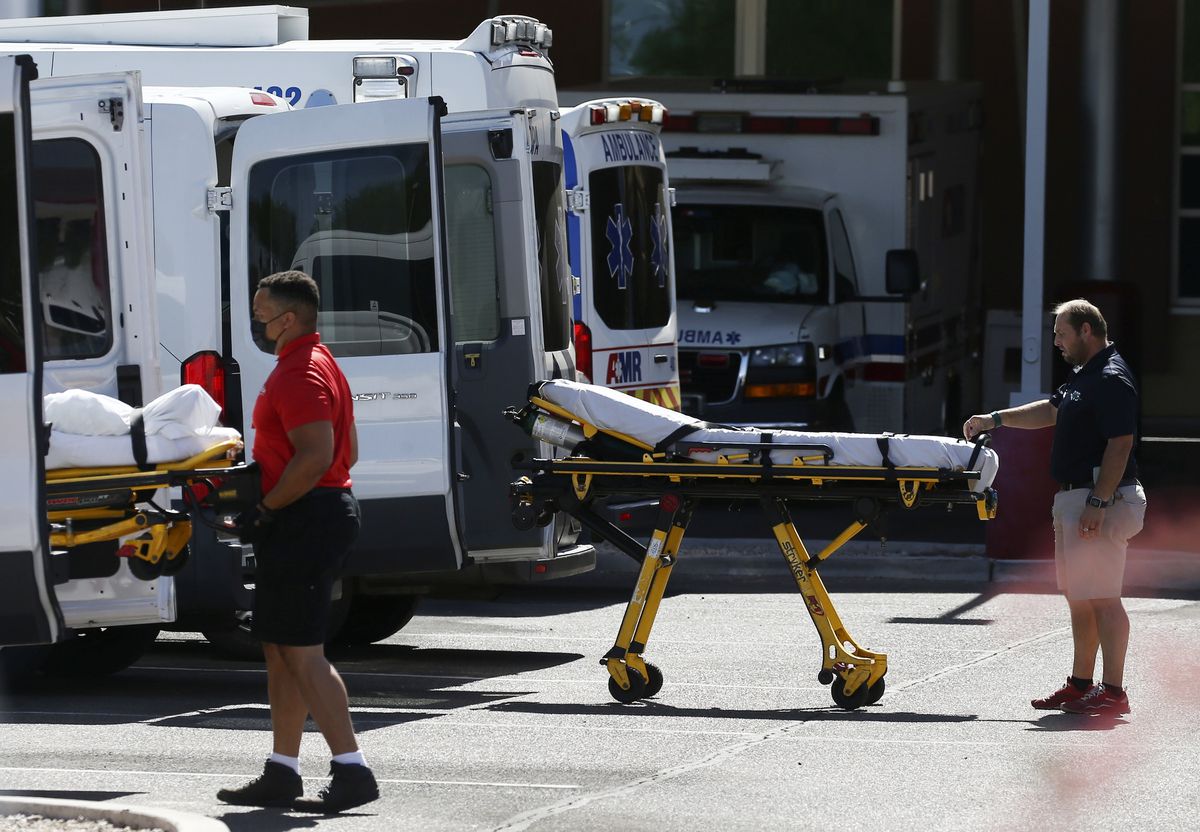 As the death toll escalates in coronavirus hot spots, evidence is growing that young people who work outside the home, or who surged into bars and restaurants when states relaxed shutdowns, are infecting their more vulnerable elders, especially family members.

Front-line caregivers, elected officials and experts in Houston, South Florida and elsewhere say they are seeing patterns of hospitalization and death that confirm fears this would happen, which were first raised in May and June. That was when Florida, Texas, Arizona, California and other states reopened in efforts to revive their flagging economies.

The emerging trend highlights the difficulty of relying on the Trump administration's strategy of sheltering the most vulnerable while the young and healthy return to work and school. That approach runs the risk of transmitting the virus when two or three generations share the same home and when many lower-income workers have little choice but to brave exposure to do their jobs.

Sooner or later, doctors said, most older people and those with underlying health problems will mix with the younger generation.

Ethnically diverse parts of the Sun Belt, where caseloads are climbing fast, are home to a larger share of multigenerational families who live together than other sections of the United States. A record 64 million people - about 20% of the U.S. population - lived in homes with at least two adult generations or grandparents and grandchildren under 25 in 2016, according to an analysis of census data by the Pew Research Center.

That is even more true for Hispanics, who have large populations in Florida, the Southwest and California. About 27% live in multigenerational households. The figure is similar for black people (26%) and Asians (29%), Pew found.

The pandemic and its accompanying economic hardship also have forced some younger adults back into their parents' homes.

It is impossible to know how any person acquires the coronavirus, and with community transmission rampant across the Sun Belt, people can become infected in a variety of ways. So discussion of intergenerational transmission involves some speculation, as well as epidemiological modeling and research.

To date, more than 4.2 million people in the United States have been infected by the virus that causes covid-19, and more than 145,000 have died. The number of new U.S. cases hovered around 70,000 each day last week, with deaths exceeding 1,000 on four straight days. Florida and California set their own death records on some days, with more than 100 in each state.

In a heartfelt tale that has been seen around the globe, a Florida woman took to Facebook earlier this month to say she believes her 21-year-old stepson had infected her, her husband and their two younger children after he spent time with friends who were not wearing masks or social distancing.

The father, 42-year-old John Place, spent 18 days on a ventilator before doctors were able to wean him from the device nearly two weeks ago, Michelle Zymet of Plantation, Fla., said in an interview Saturday. But Place is still seriously ill, hospitalized and suffering the debilitating effects of covid-19, Zymet said.

"I pleaded with him, every day," Zymet said of her stepson. "I was that maniac. 'Please wear your mask. Hand sanitizer. Social distance.' "

Younger adults need to understand that "you don't live in a bubble," she said. "You have to think about everybody in the community. Don't just think about yourself."

In a post on her Facebook page, Zymet also said she was not "trying to bash my stepson or put this immense amount of guilt on him. . . . He feels terrible for what has happened and just wants others not to make the same mistake he did!"

People in their 20s and 30s die of covid-19 in much smaller numbers than those 60 and older, and at first the death toll in the Sun Belt did not keep pace with infections. Now, however, epidemiologists' prediction of a follow-up surge in fatalities is bearing out.

The question is why.

Experts note that younger people are disproportionately asymptomatic when they become infected, so some may not know they are bringing it home.

Peter Paige, chief medical officer for Miami's Jackson Health System, said that a month ago, about 40% of the people hospitalized for covid-19 in the system's three facilities were 65 or older. Now that proportion has climbed to about 55%.

About 60 to 65% of the people now dying of covid-19 are in that age range - a figure approaching the proportions of the early days of the pandemic, he said.

In Jackson's emergency departments, meanwhile, 85 to 90% of covid-19 patients are younger than 65, Paige said. Many do not need to be admitted.

"It appears there's a lot more positivity coming in the younger population, but it seems like a lot of the deaths are coming in that high-risk population," he said.

In recent days, the mayors of Miami, Miami-Dade County and Broward County said household transmission has become a critical factor in that area's outbreak.

"I would tell our residents . . . that they should consider, particularly if they have a multigenerational household, wearing masks indoors at times . . . and also respecting social distance when they're at home," Miami Republican Mayor Francis Suarez said at a news conference last week.

Miami-Dade County Mayor Carlos A. Giménez, a Republican, also urged people to distance themselves from family members who may carry the virus without seeming to be sick.

"Yes, I know it's a sacrifice," he said, "but do so because, again, just because it's your son, or your daughter, or your cousin, or your mother, or your father, doesn't mean they don't have covid."

Recent research on household transmission is mixed. Researchers who studied household contacts in Guangzhou, China, in January and February estimated that close relatives living in the same home gave 12.4% of their family members the virus, according to research published last month in the journal Lancet Infectious Diseases.

But a separate statistical analysis of eight European countries earlier this month in the journal Proceedings of the National Academy of Sciences found no conclusive evidence that intergenerational relationships affected the spread or severity of the pandemic in those places.

In Tennessee, data analyzed by John Graves, an associate professor of health policy at Vanderbilt University School of Medicine, showed an increase in infections among young adults in the Nashville and Memphis areas. Graves attributed the surge to that age group returning to downtown bars as the shutdown eased and, later, to Fourth of July gatherings.

Now the data is starting to indicate that older adults are also becoming infected.

"What that is suggestive of is that initial seeding is now starting to spread to older generations," he said.

The trend is not universal. In Los Angeles, which is experiencing a huge growth in cases, the outbreak still appears to be concentrated among younger adults, said Neha Nanda, medical director of infection prevention and antimicrobial stewardship at Keck Medicine of USC.

The median age of people admitted to area hospitals during the first surge was about 60, while this time it is between 35 and 40, she said. Many young adults with covid-19 are sent home from emergency departments and testing sites because their symptoms are mild, she said.

"I think it's not happening as of yet," Nanda said of older adults showing up at hospitals. "I would not exclude that possibility."

California nevertheless set a record for deaths two days in a row last week, including 159 on Friday.