Trump says he plans to bar TikTok from operating in the U.S. 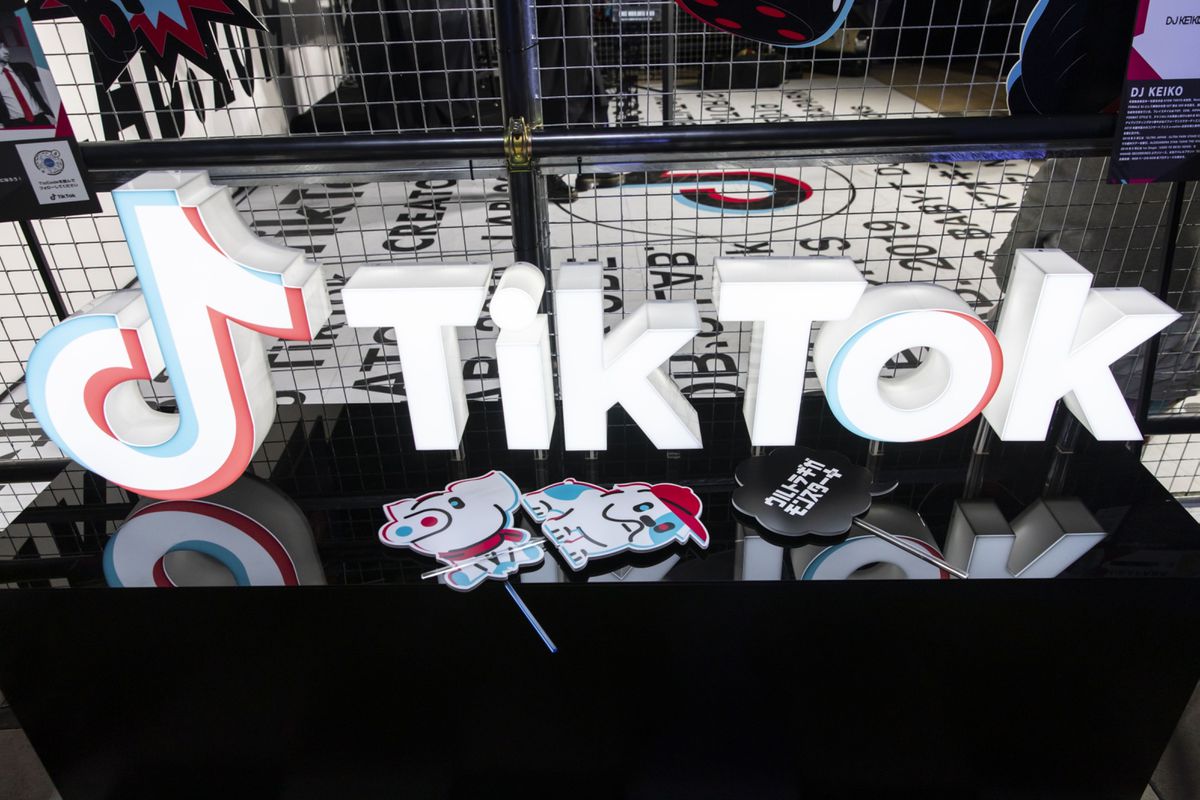 Signage of TikTok is displayed at TikTok Creator's Lab 2019 in Tokyo, Japan on Feb. 16, 2019. MUST CREDIT: Bloomberg photo by Shiho Fukada

Signage of TikTok is displayed at TikTok Creator's Lab 2019 in Tokyo, Japan on Feb. 16, 2019. MUST CREDIT: Bloomberg photo by Shiho Fukada

President Donald Trump said late Friday he plans to ban Chinese-owned TikTok from operating in the United States, the latest sign of the administration's increasingly strident stance on China and its tech companies.

"As far as TikTok is concerned, we're banning them from the United States," Trump told reporters aboard Air Force One.

Earlier Friday, Trump was considering signing an order forcing China's ByteDance to sell off the U.S. portion of TikTok over national security concerns, according to people familiar with the talks, who spoke on the condition of anonymity because they were not authorized to discuss it publicly. One of the individuals confirmed Microsoft was in the lead to acquire the popular platform's U.S. service.

While the order was originally expected to be signed Friday, it may fall through, the people warned. The president was also considering other approaches, including designating TikTok under an executive order that allows the president to exclude national security threats from U.S. networks.

Late Friday, the president told reporters he was not in favor of a deal to let a U.S. company buy TikTok's U.S. operations. Trump said he could use emergency economic powers or an executive order to ban TikTok.

"Well, I have that authority. I can do it with an executive order or that," he said, referring to emergency economic powers.

The order that would force a sale, which stems from a national security investigation, is fairly rare but has been used by Trump as recently as March, when the president ordered a Chinese company to sell its stake in a U.S. hotel-software company. Last year, the Trump administration used it to demand the Chinese owners of gay dating app Grindr give up control of the company.

If Microsoft does acquire TikTok, it would make it a major rival to Facebook, Google's YouTube and other tech giants overnight, dramatically reshaping the U.S. social media landscape.

The decision to force a sale comes amid growing concern among U.S. officials that the Chinese government could access users' private data, something that prompted Secretary of State Mike Pompeo to say earlier this month that the United States is "certainly looking at" banning TikTok.

Branches of the U.S. military, including the Army and Navy, have banned the app from government issued phones. The Pentagon urged its employees last year to uninstall the app due to security concerns.

On Friday, Trump reiterated that option. "We may be banning TikTok," Trump told reporters before leaving for Florida. "We may be doing some other things. There are a couple of options. But a lot of things are happening, so we'll see what happens. But we are looking at a lot of alternatives with respect to TikTok."

TikTok spokesperson Hilary McQuaide declined to comment on the expected order, but she said they are "confident in the long-term success of TikTok." Microsoft spokesman Frank Shaw declined to comment. Bloomberg News first reported the news on the divestiture.

The other order the government could apply is the 2019 International Economic Emergency Powers Act, which effectively bans any communications tool that is a national security threat to the United States.

If Trump uses the "full force" of the remedies under the executive order, said Stewart Baker, a former National Security Agency general counsel, "No American could work for them. The app store couldn't make them available. American advertisers couldn't pay them for ads. It would be economically devastating for them."

The Committee on Foreign Investment in the United States, an interagency body whose powers were strengthened by 2018 legislation, recommends to the president whether certain proposed takeovers should be rejected, and whether completed takeovers should be reversed, on national security grounds. CFIUS began investigating an acquisition by Beijing-based ByteDance after lawmakers asked the government to step in over national security concerns.

ByteDance bought karaoke app Musical.ly in 2017 and merged it with TikTok, launching the app to mass popularity in the United States.

James Andrew Lewis, vice president of the Center for Strategic and International Studies, said foreign companies usually take the hint when they think a demand from the U.S. government will be coming.

"Usually everyone gets the message and takes action without waiting for formal government action," he said.

Buying TikTok could reshape the Big Tech landscape, giving Microsoft a strong foothold in the U.S. consumer market with one of the world's fastest growing social media platforms. Unlike many of its competitors, Microsoft does not have a creative social media company to sow brand recognition with younger users, though the Redmond, Wash.-based company does own professional networking site LinkedIn.

While the acquisition could raise some antitrust eyebrows, regulators haven't typically blocked acquisitions of business lines that are dissimilar from what a company already does. Microsoft also has deep ties with the U.S. government, most recently winning the Pentagon's JEDI cloud computing contract. Microsoft as a buyer could help quell administration security concerns about TikTok data.

Facebook CEO Mark Zuckerberg called out TikTok as a rival during a congressional antitrust hearing earlier this week, at which Microsoft was noticeably absent.

TikTok has tried in recent months to convince U.S. users and regulators of its strong ties to the country. It emphasizes that it has hundreds of employees in the United States and even hired former Disney executive Kevin Mayer to be its new chief executive in May.

On Wednesday, Mayer pledged the company will allow U.S. regulators and privacy experts to take a closer look under its digital hood, offering them the ability to "examine" its underlying software code in response to claims it is handing off data to the Chinese government.

The app, which lets users create and post short videos with music and other effects, has surged in popularity even more during the coronavirus pandemic as people search for at-home activities and distractions. Teens are especially active on TikTok, creating videos showcasing their dancing, pranks and cooking skills.

This is the latest in a string of moves by the Trump administration to counter Chinese tech giants.

Tension has already come to a head over Chinese telecom giant Huawei, the world's largest provider of mobile network gear - a field from which U.S. companies are largely absent. The United States calls Huawei a security risk, which the company denies, and has undertaken an international lobbying campaign to persuade other countries not to buy from Huawei.

The Trump administration has also targeted other Chinese companies, restricting trade with more than a dozen it accuses of supplying surveillance gear in the western province of Xinjiang, where U.S. officials and human rights groups say China's ruling Communist Party is holding Muslims in mass detention camps.

In March, Trump ordered a Chinese company to divest all ownership of a U.S. hotel-software company, saying the Beijing investor could harm U.S. national security. A written order from the president's office suggested the administration was concerned about Chinese access to StayNTouch's hotel-guest data.

The order, which followed a CFIUS review, instructed the Chinese company to immediately to refrain from accessing any of StayNTouch's hotel-guest data.

After the order was issued, Beijing Shiji said it was "not a threat to U.S. security in any way."

"We offered a range of significant proposals to mitigate any concerns the U.S. government might have, including further restricting access to guest data and appointing an independent monitor to ensure these protections. Unfortunately, those offers were rebuffed," the company said at the time.

In 2018, after a CFIUS review, Trump ordered Singapore-based Broadcom to abandon its $117 billion bid for the U.S. semiconductor company Qualcomm, blocking what would have been one of the biggest technology deals in history.

A full presidential order isn't always required to block or reverse a deal. Lawyers familiar with CFIUS reviews say the national security committee can tell a foreign company: sell the asset or the president will issue an order.

That appears to be what happened last year, when the Trump administration forced a Chinese company to sell its majority stake in a U.S. health-care-data company, PatientsLikeMe.

When Pompeo said earlier this month that TikTok might be banned, frantic users took to the app to bemoan its potential demise and urge followers to find them on other social media sites.

"I really hope that this will not happen," one user said in a video. "All the videos, all the memories of you. This can't be true."