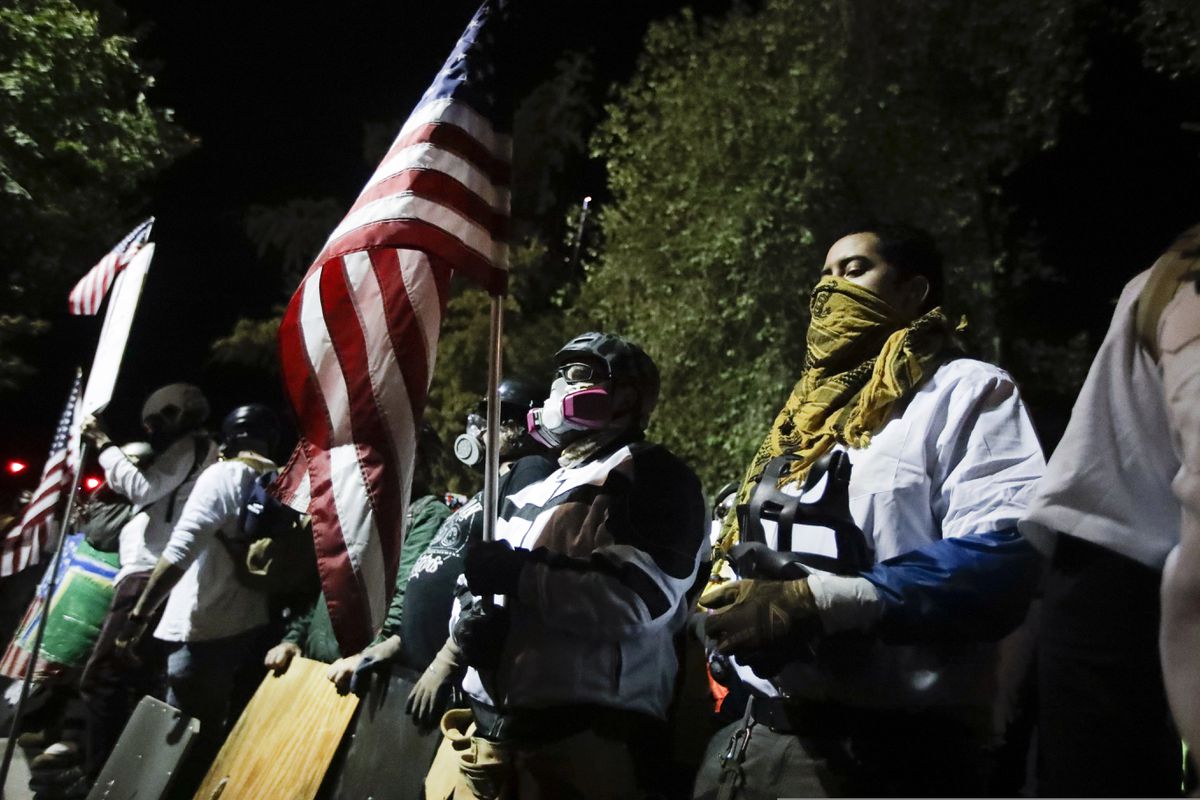 PORTLAND, Ore. — The first nightly protest in downtown Portland after a deal was struck for the withdrawal of federal agents guarding a courthouse was largely peaceful and ended Friday without any major confrontations between state police and demonstrators.

The scene outside the federal courthouse that started with yet another demonstration Thursday night stood in sharp contrast to the two weeks of violent clashes between the protesters and the agents sent by President Donald Trump to quell the unrest in Oregon’s largest city.

Thursday marked a new chapter in the police response to 64 straight days of protests. It remains to be seen what the oversight of Oregon State Police will mean. Several hundred people gathered downtown by 9 p.m. Thursday to protest and to witness what will unfold.

Jasmine Lea-Miller often attends the nightly protests, sometimes staying as late as 5 a.m. She has seen repeated use of tear gas and use of force, by both local and federal officers. She questioned the change that Oregon State Police can bring about.

The demonstrations began in late May after the Minneapolis police killing of George Floyd. Federal officers began policing the protests about a month later. Federal officials have said officers won’t leave entirely until they are satisfied the Mark O. Hatfield United States Courthouse is protected.

On Thursday afternoon, a handful of state troopers, wearing their standard-issue two-tone blue uniforms and broad hats, milled about behind the federal courthouse fence, chatting with each other and courthouse security workers.

They looked at Lownsdale Square across Southwest Third Avenue, the city park that had been cleared early Thursday of campers and debris by Portland police in preparation for the changing of the guard.

The park was taped off and empty for most of the day. Neighboring Chapman Square and the surrounding sidewalks also were closed.

Police removed the tape Thursday evening as people prepared for a Black Lives Matter rally at the local Justice Center next to the courthouse. Portland officers who had been walking around the courthouse and parks also left.

About 200 people, including Reese Monson, stood outside the courthouse and walked around the parks nearby. Monson, who is Black, said he hoped the change in guard will move the focus back to ending police violence against Black people.

“Even though the feds are not gassing us, because they’re not here,” he said, “doesn’t mean the police won’t kill us, and we don’t want that. We want to let them know that you can’t just kill Black people and get away with it.”

Dozens of demonstrators also started to gather on the waterfront, with plans to eventually march to the courthouse. Dr. Karen Mularsky dressed in her scrubs to help take medical care of protesters. She said she hopes the state police presence will deescalate the situation, but is still concerned protesters weren’t involved in the conversation between federal and state officials.

Katy Vatter, an educator, said it remains to be seen what impact the withdrawal of federal forces will have on nightly protests. But ultimately, Vatter said, people should keep showing up for the core reason behind the protests: the Black Lives Matter movement.

The marchers arrived at the Justice Center rally around 9:15 p.m. By that point, the crowd continued to grow, surpassing 2,000 people. Police stayed away.

Several people talked to the crowd, including Kent Ford, who helped start the Black Panthers in Portland in the Civil Rights era and a fixture at the recent protests.

“George Floyd was an opportunity for you people to see what we already know,” Ford said. “We weren’t surprised. Black people were not surprised.”

As people spoke, a person walked through the crowd and passed out goggles, helmets and ear protection in preparation for a looming late-night conflict with police.

Oregon State Police took on the high-profile assignment to provide security at the courthouse after the Trump administration this month sent more than 100 federal officers to guard the building, leading to larger crowds of thousands protesting their presence and widespread condemnation by city and state officials and members of Congress.

Gov. Kate Brown brokered a deal with Trump officials to start withdrawing the federal officers, often dressed in camouflage and responding to fires, fireworks and incursions at the fence with tear gas, pepper spray and riot-control munitions. They have also swept the blocks around the courthouse.

The aggressive tactics have prompted a cluster lawsuits objecting to serious injuries they have caused and questioning the authority of the officers to move far off federal property to push people back and make arrests.

The Trump administration said it sent the extra federal officers to protect the courthouse from an element of protesters determined to do violence.

Trump on Thursday called them “professional agitators” and “professional anarchists” and repeated was his acting Homeland Security secretary said the day before -- that the out-of-town federal agents will leave only if the new approach is successful.

It remains to be seen if the state troopers can shift the dug-in dynamic of the protests – usually an hour or two of peaceful speeches and rallies, followed by a tense face-off between a smaller group of protesters and the officers.

That pattern quickly unfolded Wednesday night when thousands of demonstrators turned out. A Black Lives Matter rally ended around 10:30 p.m. The crowd decreased in size, but those who remained shifted to the federal courthouse.

Federal officials issued their first warning of the night around 10:50 p.m., prompted by people shining different types of lights, such as flashing lights and lasers, at the building. Officers then quickly streamed out of the courthouse, releasing tear gas and using impact munitions on people outside.

The tension reached a higher level around 11:50 p.m., when at least several dozen federal officers emerged on the streets. They set off gas and munitions as they closed in on the crowd and walked toward the courthouse. Some of officers swept through Lownsdale Square.

Confrontations in a two-block radius of the courthouse continued for an hour. When officers finally retreated, they set off tear gas and stun grenades.