US astronauts pack up for rare splashdown in SpaceX capsule 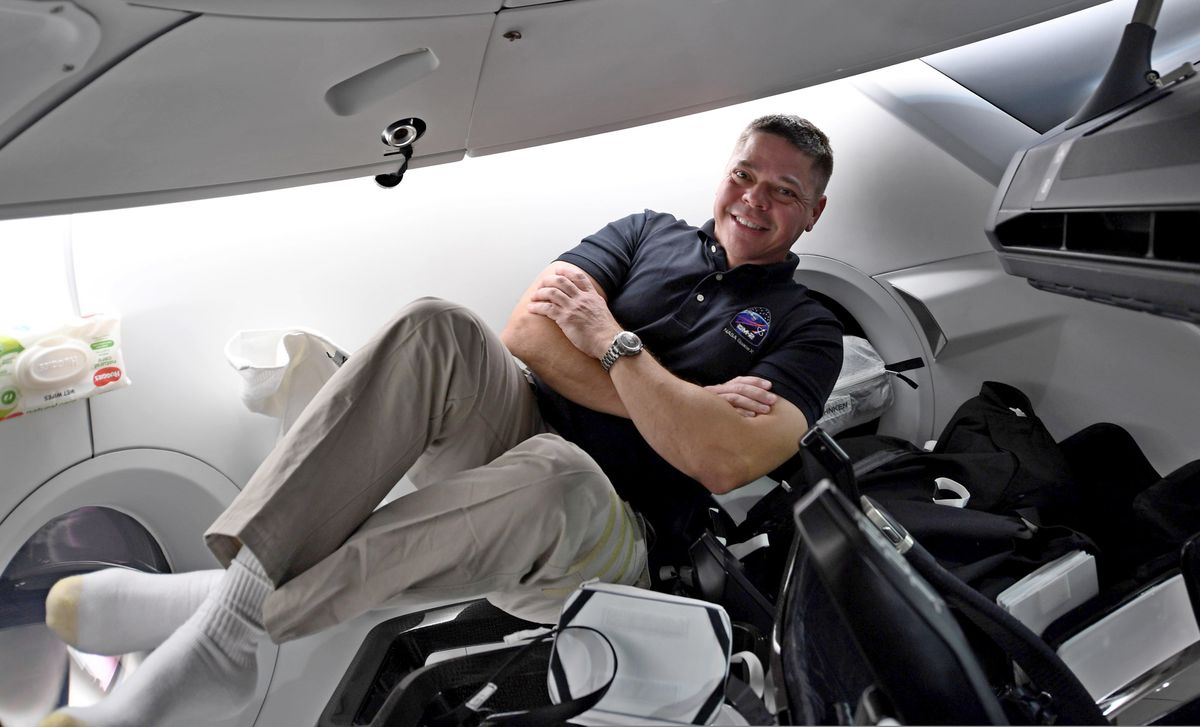 This image made available by NASA astronaut Bob Behnken on Friday, July 31, 2020, shows him inside the SpaceX Crew Dragon spacecraft docked to the International Space Station. SpaceX and NASA plan to bring Behnken and Doug Hurley back Sunday afternoon, aiming for splashdown in the Gulf of Mexico just off the Florida Panhandle. (NASA via AP)

This image made available by NASA astronaut Bob Behnken on Friday, July 31, 2020, shows him inside the SpaceX Crew Dragon spacecraft docked to the International Space Station. SpaceX and NASA plan to bring Behnken and Doug Hurley back Sunday afternoon, aiming for splashdown in the Gulf of Mexico just off the Florida Panhandle. (NASA via AP)

CAPE CANAVERAL, Fla. — Two U.S. astronauts about to make the first splashdown return in 45 years said Friday they’ll have seasick bags ready to use if needed.

SpaceX and NASA plan to bring Doug Hurley and Bob Behnken back Sunday afternoon in the company’s Dragon capsule, aiming for the Gulf of Mexico just off the Florida Panhandle. Flight controllers are keeping close watch on Hurricane Isaias, expected to stick to Florida’s east coast.

Hurley said if he and Behnken get sick while bobbing in the waves awaiting recovery, it won’t be the first time for a crew. Astronauts returning in the early 1970s from Skylab, NASA’s first space station, did not feel well following splashdown, Hurley noted.

Feeling sick “is the way it is with a water landing,” he said during the crew’s final news conference from the International Space Station.

This will be SpaceX’s first splashdown with astronauts on board, ending a two-month test flight that began May 30 at NASA’s Kennedy Space Center — the first launch of a crew from the U.S. in nearly a decade. The capsule has been docked at the space station since May 31, allowing Hurley and Behnken to chip in with spacewalks and experiments.

Hurley said the emergency and other equipment has checked out well aboard Dragon, dubbed Endeavour. Launch and rendezvous went flawlessly, "so we expect nothing different for the splashdown," he said.

Their departure leaves three on board, one American and two Russians.

After splashdown, it will take an hour or so before the capsule is hauled by crane onto a SpaceX recovery ship, where the hatch will be opened and the astronauts will get out. Flight surgeons will be among the dozens of the recovery team members.

The plan is for the Dragon to undock from the space station on Saturday, a day before splashdown. The prime target is off the coast of Panama City, halfway between Tallahassee and Pensacola.

“We won’t leave the space station without some good landing opportunities in front of us, good splashdown weather,” Behnken told reporters. “We could stay up here longer. There’s more chow and I know the space station program’s got more work that we can do.”

Like launch, the ride back will be essentially automated, with the crew and flight controllers intervening only if necessary.

Behnken has an extra reason to bring this Dragon back in good shape. Following refurbishment, the capsule will fly again next spring with a crew of four — including his wife, NASA astronaut Megan McArthur. SpaceX's next astronaut flight is targeted for the end of September.

Behnken said even before his launch, they had an inkling she would be assigned to a SpaceX flight. NASA announced the news this week.

NASA turned to SpaceX and Boeing for U.S.-based crew transport after the space shuttles retired in 2011. Russian rockets were the only way for astronauts to get to the space station until SpaceX became the first private company to launch humans into orbit two months ago. Boeing’s first crew flight isn’t expected until next year.