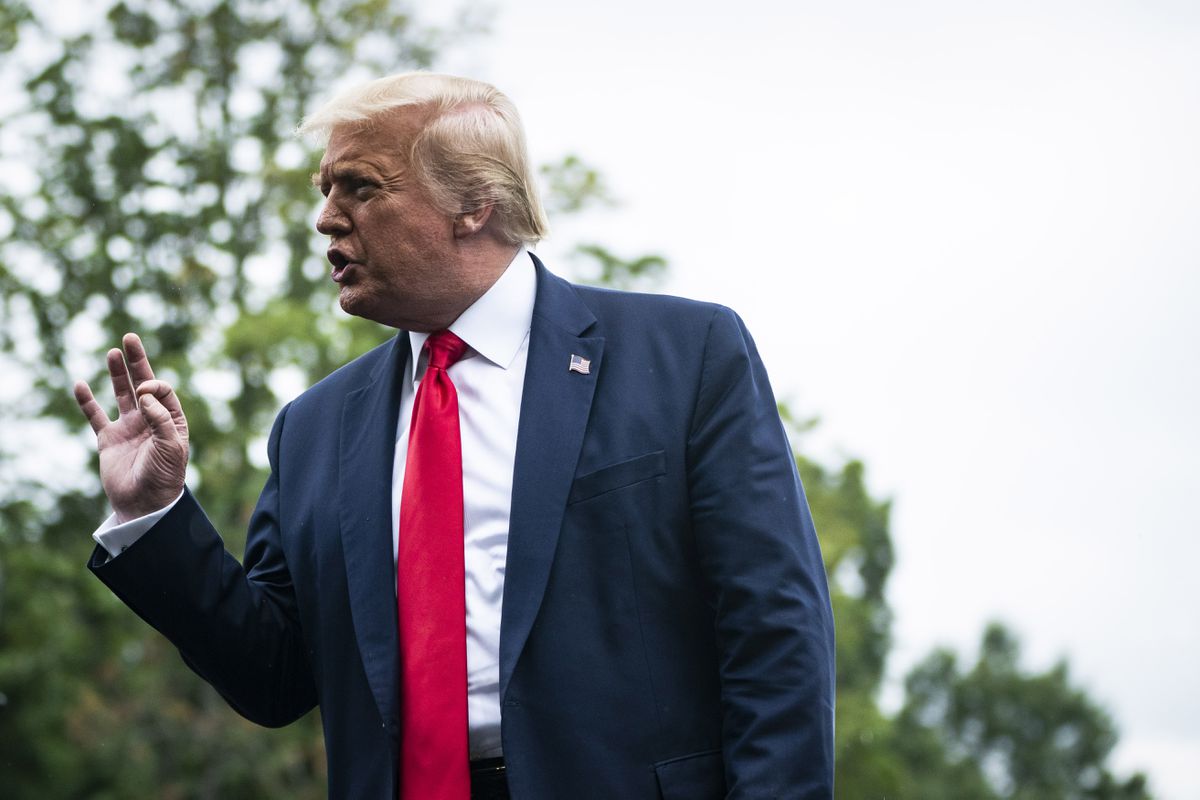 President Donald Trump stops to talk to reporters as he walks to board Marine One and depart from the South Lawn at the White House on July 31, 2020. MUST CREDIT: Washington Post photo by Jabin Botsford

President Donald Trump stops to talk to reporters as he walks to board Marine One and depart from the South Lawn at the White House on July 31, 2020. MUST CREDIT: Washington Post photo by Jabin Botsford

Signs that President Donald Trump’s reelection bid is in crisis grew steadily this past week, one of the most tumultuous moments of a presidency increasingly operating with an air of desperation as it tries to avoid political disaster in November.

Campaign officials pulled television ads off the air amid a late-stage review of strategy and messaging. At the same time, Trump publicly mused about delaying the November election, airing widely debunked allegations about fraud that were roundly rejected by Republicans and Democrats.

And as the campaign aims to mount a more aggressive defense of Trump's handling of the coronavirus pandemic, the president has reverted to touting unproven miracle cures, attacking public health officials and undercutting his own government's push to encourage good health practices.

Trump briefly lamented his predicament during a taxpayer-funded event Friday in Florida that doubled as a political rally and a showcase of poor public health practices.

"We had an easy campaign, and then we got hit by the China virus," Trump said as uniformed sheriff's deputies stood behind him and a crowd of dozens of supporters huddled before him. Few people wore masks or practiced social distancing.

With the president unable to hold traditional rallies and his central economic message no longer relevant, campaign officials are scrambling to assemble a fresh case for his candidacy on the fly.

After a six-day pause in advertising, new ads targeting Democratic rival Joe Biden are set to begin airing Monday, according to campaign officials who, like others, spoke on the condition of anonymity to discuss internal deliberations. It's the latest in a long-running attempt to define the former vice president in the eyes of voters before they cast their ballots.

But Trump himself is perhaps the greatest impediment to any successful campaign pivot, as the president has rejected calls from Republican allies and lawmakers to project a steady hand during what is shaping up to be another lost summer of self-inflicted setbacks.

The turbulent final week of July capped a month that may rank among the most ominous of Trump's term in office, marked by erratic behavior and flashing warning signs.

A slew of public polls showed Trump falling further behind Biden, who now leads by double digits nationally; Trump demoted his campaign manager Brad Parscale and replaced him with longtime GOP operative Bill Stepien; nearly 25,000 Americans died of the novel coronavirus, and a record 2 million were infected; Trump canceled the Republican National Convention celebrations; the economic recovery from a record contraction slipped into reverse; and 30 million Americans lost their $600 weekly federal unemployment assistance after the White House and Congress struggled to negotiate a stimulus package.

Struggling on multiple fronts, Trump's campaign launched a major shake-up that included a broader review of strategy, spending and messaging while ads came off the air, officials said.

Stepien — who officials say has impressed Trump with his command of data — is attempting to get a better sense of how the campaign has been focusing its energy and targeting its resources. Stepien told others he wanted to understand how ad decisions were made and why certain ads were being run, officials said. Trump’s senior adviser and son-in-law Jared Kushner approved the pause in ads, an official said.

Stepien is also reviewing personnel allocation to determine whether structuring the campaign they way Parscale did makes sense.

Campaign officials have denied there is any lingering tension over Parscale's demotion. But Stepien's elevation and swift embrace of new tactics amount to a tacit rebuke of the former campaign manager's tenure. The Stepien-led review of spending and strategy comes as a legal complaint this past week accused the campaign and an affiliated fundraising committee of failing to properly report nearly $170 million in campaign spending through firms run by Parscale. The Trump campaign denied any wrongdoing.

Campaign officials said that when the pause in ad spending ends Monday, new television spots will aim to brand Biden as a tool of liberal extremists. The negative ads will initially target swing states that have the earliest mail-in voting dates.

Pennsylvania, North Carolina and Wisconsin are among states that begin mailing out absentee ballots to voters more than 45 days before the Nov. 3 election, according to the National Conference of State Legislatures. Michigan, Georgia and Texas are among states where ballots will also begin hitting mailboxes in September.

The campaign, which held an all-staff meeting at its Arlington headquarters on Wednesday that one official described as a "call to arms," is operating under a renewed sense of urgency as it becomes clearer that a large portion of the electorate will likely cast their ballots early by mail as a result of the pandemic. That gives Trump even less time to turn things around.

But even as Stepien and top campaign aides try to impress on the staff that time is limited, Trump has done little to show he plans to change tactics. Trump's allies say they realize the pandemic will likely be the central issue for voters heading into the election and have urged him to show he is in command of the crisis.

The president has instead opted to double down on divisive messaging, reverting to form after briefly appearing to embrace a more serious tone about the pandemic.

In recent days, Trump has used his massive social media platform to promote a doctor who falsely claimed Americans did not need to wear masks because the anti-malarial drug hydroxychloroquine is a "cure" for the coronavirus.

Trump continued to express support for the doctor, Stella Immanuel, after a reporter informed him Tuesday that she had also claimed that alien DNA is used in medical treatments. When pressed, he abruptly ended the news briefing and walked away.

Earlier in the same briefing, Trump complained that health officials, including top infectious-disease expert Anthony S. Fauci, are popular but "nobody likes me."

"Why don't I have a high approval rating?" Trump asked before answering himself: "It can only be my personality. That's all."

The president set off a fresh round of drama Thursday when he publicly mused about delaying the election, which he claimed without evidence will be marred by historic fraud.

"With Universal Mail-In Voting (not Absentee Voting, which is good), 2020 will be the most INACCURATE & FRAUDULENT Election in history," he wrote on Twitter. "It will be a great embarrassment to the USA. Delay the Election until people can properly, securely and safely vote???"

A chorus of Republicans and Democrats publicly rebuked him, noting that the president does not have the authority to delay an election.

On a strictly political level, Republicans are worried that the president's onslaught against mail-in voting could hamper their efforts to turn out the vote. Trump's attempts to draw a distinction between universal mail-in voting and individually requested absentee voting, while welcomed and encouraged by party officials, have not had the intended effect on Republican voters. GOP party officials have struggled to convince voters to request mail-in ballots.

"He has denigrated mail-in voting to the point that Democrats are dominating requests for absentee ballots," said David Wasserman, House editor for the nonpartisan Cook Political Report.

Like Trump's unsubtle attempts to appeal to "Suburban Housewives" and virus-wary senior citizens, his push to discredit mail-in voting underscores the sense of angst in his reelection bid as Biden settles into a comfortable lead.

One top Biden campaign official acknowledged that the Democratic campaign strategy is often to stay out of the news when Trump's behavior is particularly inflammatory. Biden's team didn't respond until Thursday evening to the president's early morning missive suggesting that the election should be delayed.

"It is absolutely a strategic decision," said a Biden official, who spoke on the condition of anonymity to discuss internal campaign tactics. "We don't let him pull us off of our message and we don't play his game."

But some Biden campaign allies believe that the former vice president's operation is being too selective about how it responds to Trump's attacks.

Former Pennsylvania governor Ed Rendell said that he's been begging top campaign officials to punch back at Trump's ads that wrongly suggest that Biden supports defunding the police. The spots had been playing in high rotation in key swing states before the Trump campaign's recent pause.

"Obviously the Trump people have very few arrows in their quiver," Rendell said. But the "law and order" message could work with some voters, he said.

Trump, as he often does when he feels under pressure, is preparing to go more aggressively into attack mode. Campaign officials expect a ruthlessly negative race in the final months.

"We are doing a new ad campaign on Sleepy Joe Biden that will be out on Monday," Trump wrote Friday on Twitter. "He has been brought even further LEFT than Crazy Bernie Sanders ever thought possible."

Stepien has told allies he wants attacks going forward to focus on the liberal figures trying to influence Biden. Sanders, the independent senator from Vermont and self-described democratic socialist, has featured heavily in Trump's messaging against Biden.

But it’s not clear that the strategy is working. Several campaign aides and allies admitted that they have struggled to negatively define the former vice president in the eyes of voters — a long-standing goal for the summer that is quickly slipping out of reach. As Biden has largely remained in his Delaware home due to the pandemic, many of Trump’s attacks on his mental acuity, liberal policies and approach to public safety have not broken through.

"One thing that we have found in our focus groups is that people just don't know anything about Joe Biden," said Kelly Sadler, the communications director for America First, the official pro-Trump super PAC.

America First, which is currently running ads painting Biden as weak on crime, is conducting polling to test which messages might work best against the former vice president in the final stretch of the race.

Trump campaign ads set to run in the coming days are also aimed at turning up the pressure on Biden, who the president has tried to brand as "sleepy" before switching to more ominous descriptors such as "corrupt" and "puppet of the militant left."

As it goes on the attack in the political realm, Trump's campaign is in a defensive crouch when it comes to the electoral map. Polls show Biden leading across the battleground states and competitive in Republican strongholds such as Texas and Georgia.

Trump's campaign, which has already spent $1 billion, is using its hefty war chest to defend Republican territory, including Arizona.

America First, the super PAC, has stopped running ads in Michigan, acknowledging that its less likely than other swing states to remain in Trump's column in November, an official said. The group is currently running television spots in North Carolina, Arizona, Pennsylvania and Wisconsin.

Stepien has also sought to focus the campaign on securing the most direct path to 270 electoral votes. The campaign, which has also pulled back advertising in Michigan, has gamed out scenarios where Trump loses some of the states he won in 2016 and still ends up victorious.

"We only need to win either Wisconsin or Michigan or Pennsylvania to win this thing again," Stepien told reporters on July 24.

But news that Trump's campaign had paused to reassess its messaging was welcomed by Biden's team, which viewed the move as a validation of the Democrat's more low-key strategy.

T.J. Ducklo, a spokesman for Biden's campaign, said Trump is losing because "he abandoned the American people" and lacked "any coherent strategy" to address a pandemic that has cost 150,000 lives and millions of jobs.

“There,” he said in a statement. “Message assessment complete.”