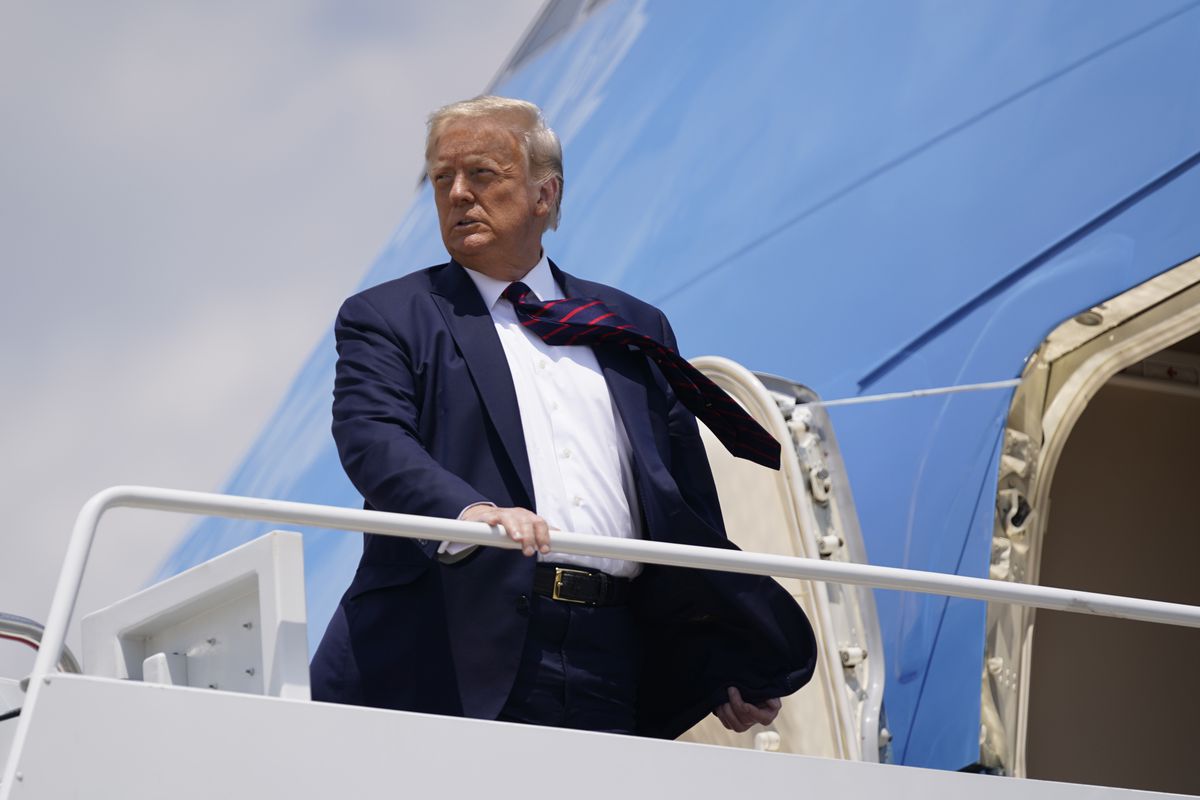 President Donald Trump boards Air Force One for a trip to visit Bioprocess Innovation Center at Fujifilm Diosynth Biotechnologies in Morrisville, N.C., Monday, July 27, 2020, in Washington. President Trump’s lawyers filed fresh arguments Monday to try to block or severely limit a criminal subpoena for his tax records, calling it harassment of the president. Lawyers filed a rewritten lawsuit in Manhattan federal court to challenge the subpoena by Manhattan's state prosecutor on grounds they believe conform with how the U.S. Supreme Court said the subpoena can be contested. (AP Photo/Evan Vucci)

President Donald Trump boards Air Force One for a trip to visit Bioprocess Innovation Center at Fujifilm Diosynth Biotechnologies in Morrisville, N.C., Monday, July 27, 2020, in Washington. President Trump’s lawyers filed fresh arguments Monday to try to block or severely limit a criminal subpoena for his tax records, calling it harassment of the president. Lawyers filed a rewritten lawsuit in Manhattan federal court to challenge the subpoena by Manhattan's state prosecutor on grounds they believe conform with how the U.S. Supreme Court said the subpoena can be contested. (AP Photo/Evan Vucci)

NEW YORK - President Donald Trump’s renewed effort to shield his tax returns is part of a delay campaign seeking the immunity from prosecution that the Supreme Court has rejected, the Manhattan District Attorney’s Office said in a court filing Monday that suggests it is looking at a broader array of possible criminal activity than previously acknowledged.

The district attorney, Cyrus Vance Jr., is seeking eight years worth of the president's tax records as part of his investigation into payments made ahead of the 2016 election to two women who claimed to have had affairs with Trump several years prior, and whether any business records were manipulated in violation of New York state law. Trump, who has denied the women's allegations, has been fighting a grand jury subpoena for the records issued to his accounting firm Mazars USA a year ago.

Monday's filing suggests the district attorney also may be looking at "alleged insurance and bank fraud," as cited in past reports by The Washington Post and other news organizations. Such "publicly available information itself establishes a satisfactory predicate for the subpoena," it says.

The district attorney's filing comes as Trump's lawyers argue the subpoena is illegal, having been shut down by the Supreme Court last month in their bid to claim that, as a sitting president, Trump is immune from investigation. The district attorney's office countered Monday that the president's latest argument, filed in Manhattan federal court last week, is an attempt to obstruct the investigation from going forward. Impending statutes of limitations are nearing and could hinder authorities from pursuing charges if a case is warranted, the filing says.

"Every day that goes by is another day [Trump] effectively achieves the 'temporary absolute immunity' that was rejected by this Court, the Court of Appeals, and the Supreme Court," Dunne said.

Trump's lawyers have denied they are trying to impede the case from moving forward.

Marrero has previously rejected arguments akin to those in the president's new complaint, Dunne wrote in Monday's filing. Trump's new claim that the subpoena is "overbroad" and issued in "bad faith" for political purposes has been raised in arguments throughout the litigation that led to the major Supreme Court ruling but was never formally presented by Trump's legal team, allowing them to raise it now that the immunity issue is dead.

The district attorney's office said in its filing Monday that Trump's argument "fails for the additional reason that it rests on the false premise that the grand jury's investigation is limited to so-called 'hush-money' payments" made in 2016. In seeking to justify its pursuit of his tax records dating to 2011, prosecutors cited past media reports documenting what they characterized as "possibly extensive and protracted criminal conduct" at the Trump Organization "dating back over a decade."

Trump was dealt a blow by the Supreme Court last month when in a 7-to-2 decision, the court said he was not protected by presidential immunity from state-court level actions. The court allowed for the case to get sent back to the U.S. District Court in Manhattan for any additional challenges Trump would seek to make.

In the amended civil complaint filed a week ago, the president's lawyers challenged the legality of the subpoena and dubbed Vance's investigation "harassment."

The hush-money payments under scrutiny were made to pornography actress Stormy Daniels and former Playboy model Karen McDougal. Michael Cohen, Trump's longtime personal lawyer and confidant, made the payments while still employed by Trump. He pleaded guilty in 2018 to committing campaign finance violations in connection with the payments to Daniels and McDougal, as well as other crimes.

Vance's office initiated a grand jury proceeding in 2018. The subpoena to Mazars, Trump's accounting firm, was issued last August. It mirrored two congressional subpoenas that had already been issued, a fact the president's lawyers also have criticized as proof the investigation is politically motivated.

The district attorney "issued a grand-jury subpoena he knew was overbroad and sought irrelevant records," said the amended complaint from Trump's lawyers filed July 27. Before the subpoena being issued the Trump Organization cooperated to an extent with Vance's requests "including by producing hundreds of documents in response to the grand-jury subpoena," it says.

Trump’s tax returns were the sticking point, leading Vance to subpoena the accounting firm instead of trying to get it from the Trump Organization, according to court records.