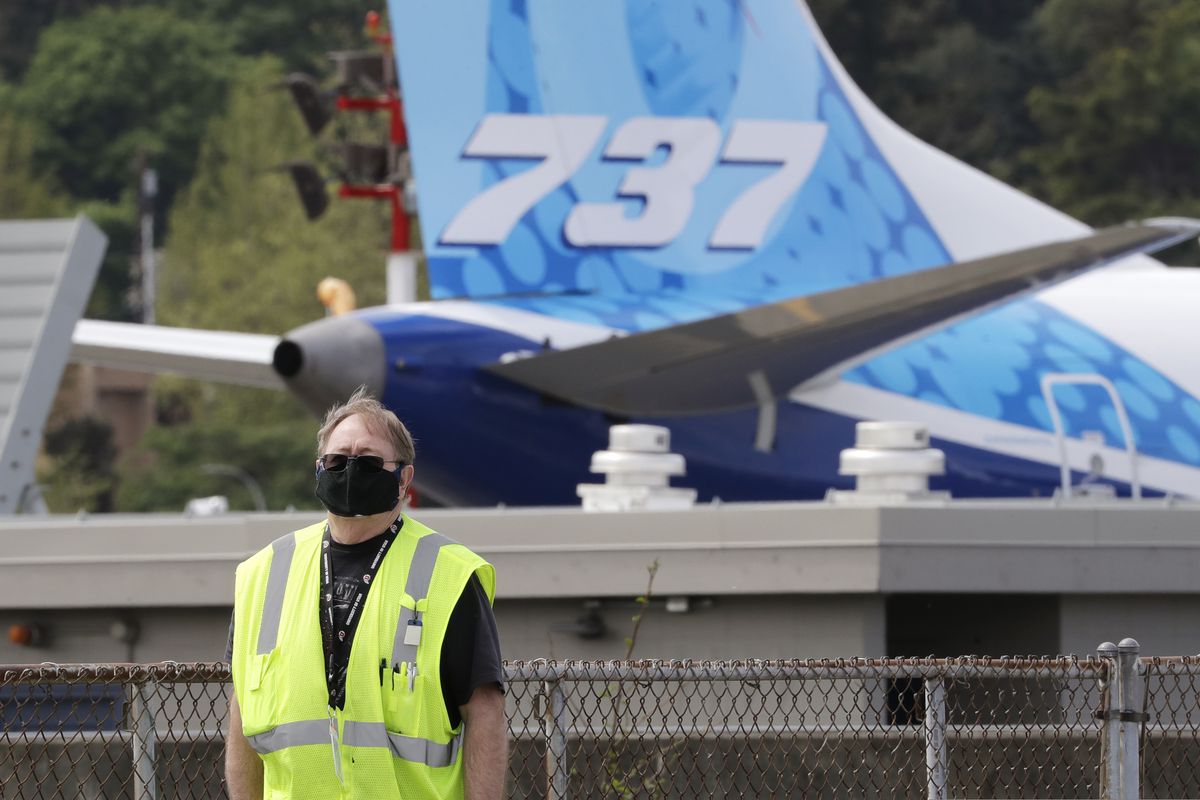 A masked worker walks in view of a 737 jet at a Boeing airplane manufacturing plant Wednesday, April 29, 2020, in Renton, Wash. (AP Photo/Elaine Thompson)

A masked worker walks in view of a 737 jet at a Boeing airplane manufacturing plant Wednesday, April 29, 2020, in Renton, Wash. (AP Photo/Elaine Thompson)

The Federal Aviation Administration on Wednesday proposed a fine of more than $1.25 million for Boeing, alleging that senior managers exerted undue pressure or interfered with the work of employees designated to represent the FAA in safety inspections.

According to an FAA charging letter, at least four senior Boeing managers at the company’s plant in South Carolina — including the vice president of 787 operations, the senior quality manager and the director of delivery — pressured engineers and inspectors charged with overseeing quality control in production of the 787 Dreamliner.

Those managers should not have been directly involved in the process of signing off on quality and safety, which is the purview of a specific team of Boeing employees who are designated to represent the FAA and to perform independent inspections of aircraft production on behalf of the safety agency.

The FAA letter accuses these senior managers of “pressuring,” “harassing,” and “berating the performance of” engineers, inspectors and managers in the oversight program, known as Organization Designation Authorization.

The allegations shine a spotlight on how FAA oversight is delegated to Boeing. Weaknesses in that delegation system were also exposed in the investigations into how Boeing’s 737 MAX was certified before the two fatal crashes that grounded the jet.

According to the FAA’s letter about the managers at the North Charleston, S.C., plant:

They pressed an inspector “to perform a compliance inspection of an aircraft which was not ready for inspection.”

They harassed inspectors and managers, demanding that they “perform inspections more quickly and to report to aircraft ready for inspection faster.”

They berated the performance of inspectors and threatened to have them replaced by other employees.

They waited outside aircraft to monitor how quickly oversight inspectors responded to requests and how long their inspections took.

And after a highly qualified manager filed an “undue pressure” report, they retaliated by declining to interview the manager for a promotion.

The FAA’s authorization of a team of engineers and managers within Boeing to inspect aircraft and issue airworthiness certificates on its behalf is a standard aerospace industry arrangement.

The FAA allegations describe a risk to the integrity of the ODA’s oversight role.

“Boeing’s status as an ODA holder is a privilege, not a right, and we have an obligation to work to earn that privilege every day,” the Boeing executives wrote in the message, a copy of which was obtained by The Seattle Times. “When exercising delegated authority, Boeing-badged ODA representatives are the FAA, and must be treated with the same respect and deference that is owed to our regulator.

“We know the vast majority of our team appreciates this,” Deal and Hyslop added. “But just one mistake, or one Boeing employee engaging our ODA representatives in a way that is inconsistent with our values, can undo years of hard-earned trust with the FAA.”

Similar allegations of undue pressure from managers arose separately following the two deadly MAX crashes, The Seattle Times reported in May 2019, related not to oversight of production but of the analysis and testing conducted during the design and certification of that now-grounded aircraft.

A report last year on the 737 MAX crashes by an international panel of air-safety regulators convened by the FAA recommended changes to the way Boeing’s oversight organization is structured to ensure engineers can perform oversight “without fear of punitive action” and can do their work “without any undue pressure when they are making decisions on behalf of the FAA.”

In April last year, the New York Times reported that Boeing South Carolina was plagued by production issues and weak oversight that threatened to compromise safety.

The Department of Justice — which had convened a grand jury and brought in the FBI to investigate potential criminal negligence during design and certification of the 737 MAX — widened the scope of its inquiries to cover shoddy workmanship and lax oversight at the North Charleston manufacturing site.

In June 2019, the Seattle Times reported that federal prosecutors had subpoenaed records from Boeing relating to 787 production in South Carolina.

As yet, there’s no indication of any charges coming from the grand jury investigation.

The FAA’s newly proposed fine is relatively small in the scale of Boeing’s finances, and smaller than some previous fines for quality control issues.

In 2015, Boeing paid $12 million — also a paltry sum for such a company — to settle more than a dozen FAA investigations that revealed a disquieting pattern of falsified paperwork and ignored procedures that created quality issues on production lines in both Washington state and South Carolina.

And Boeing has been plagued for several years with production quality problems at all its sites, with repeated revelations of debris left inside finished aircraft, including the fuel tanks of the 737 MAX and multiple repeat occurrences on the 767 tanker.

The first violation cited in Wednesday’s letters, for which the FAA proposes a $1.1 million fine, alleges that Boeing implemented an improper structure for its ODA, making its members answerable to managers who shouldn’t have had a say in their inspections.

Between November 2017 and July 2019, engineers and inspectors in units of the ODA in South Carolina reported to managers who were not approved by the FAA to oversee their work, the FAA said.

“Boeing failed to ensure the ODA administrators were in a position to effectively represent the FAA’s interests,” the FAA alleges.

According to the charging letter sent to Boeing, the FAA said that between September 2018 and May 2019 the senior Boeing managers accused of interfering with the work of ODA inspectors included three who were not part of the ODA.

The FAA proposes a second civil penalty of almost $185,000 related to a second, much more specific violation on Feb. 26, 2020, when Boeing subjected ODA inspectors to undue pressure during an airworthiness inspection of a Boeing 787-9 Dreamliner built for United Airlines.

The charging letter for that incident explains how senior managers kicked up a serious fuss over an inspector delaying his approval on a very small matter: the replacement of an inoperable sconce light at seat 50 on the airplane.

The FAA said managers had set a deadline of 4 p.m. that day to deliver the jet to United. When an inspector found various discrepancies, including the nonworking light, Boeing mechanics worked to resolve them and said it was ready for inspection soon after noon.

But the inspector found the light still didn’t work. The director of the Boeing S.C. jet delivery center, via multiple texts and phone calls to an ODA manager, emphasized the deadline and told the inspector to stand by while a technician from Safran, which supplied the light, installed a new one.

The Safran technician installed the light and stamped the issue resolved, and Boeing “documented acceptance of the work.”

At least four senior managers arrived at the scene to make sure the plane went through on time. But then the ODA manager established that the Safran engineer had done the work without any drawings or installation instructions, which the inspector needed to see before sign-off.

One of the senior managers “became agitated and stated in a loud voice that there were no work instructions.”

But every little step in an airplane’s manufacture has to be done by the book, and so still the ODA inspectors balked.

The FAA found that the Safran technician’s entry in the paperwork was false and that Boeing should not have accepted the light installation.

“Boeing failed to maintain its quality system,” the FAA concluded.

It’s not clear if Boeing met its 4 p.m. deadline, but later that day the issue was finally resolved to the inspector’s satisfaction and United took delivery of its 787.

In all the incidents cited, said the FDA, “despite the alleged undue pressure or interference from Boeing managers,” the ODA inspectors fulfilled their FAA responsibilities and ensured the aircraft safe to operate before they issued airworthiness certificates.

In a statement, Boeing insisted that “the allegations were appropriately reported, investigated, and disclosed to the FAA” and that Boeing took corrective action in response to both incidents.

Boeing has 30 days to respond to the FAA’s allegations.