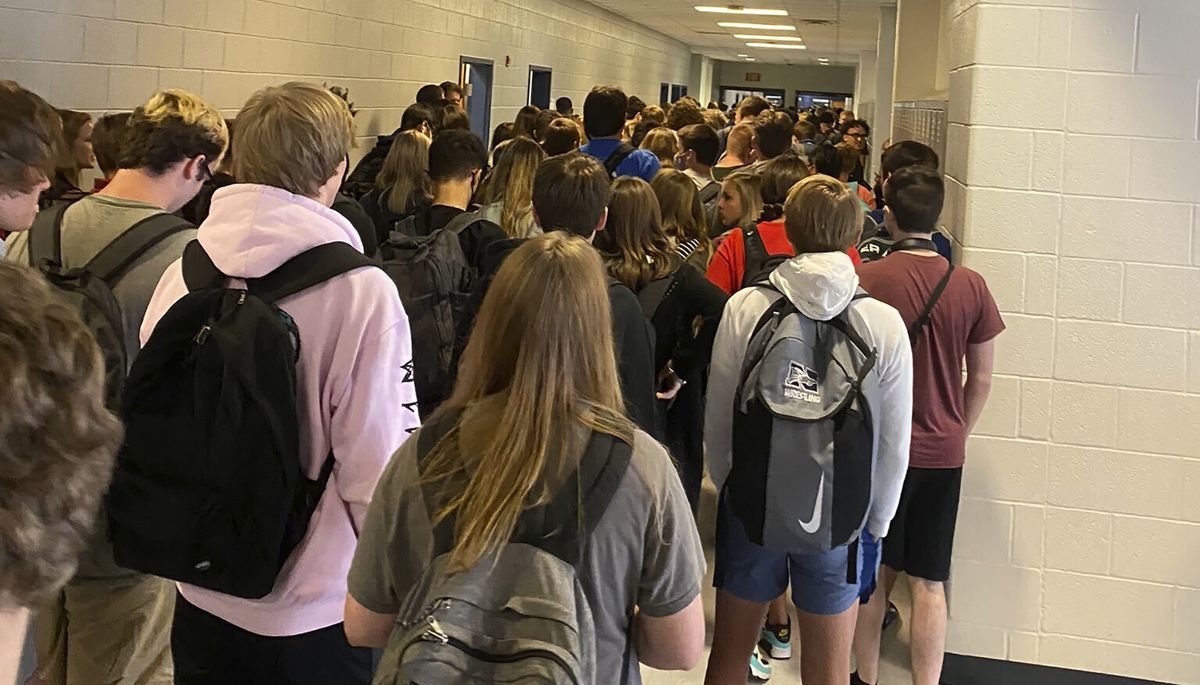 In this photo posted on Twitter, students crowd a hallway, Tuesday, Aug. 4, 2020, at North Paulding High School in Dallas, Ga. The 30,000-student suburban Paulding County school district in suburban Atlanta resumed classes Monday with 70% of students returning for in-person classes five days a week, days after the principal at North Paulding announced some members of the football team had tested positive for COVID-19. The district says it is encouraging mask use, but isn't requiring it. (Twitter via AP)

In this photo posted on Twitter, students crowd a hallway, Tuesday, Aug. 4, 2020, at North Paulding High School in Dallas, Ga. The 30,000-student suburban Paulding County school district in suburban Atlanta resumed classes Monday with 70% of students returning for in-person classes five days a week, days after the principal at North Paulding announced some members of the football team had tested positive for COVID-19. The district says it is encouraging mask use, but isn't requiring it. (Twitter via AP)

A Georgia high school has lifted the suspension of at least one student who shared images of her crowded high school hallway jammed with mostly maskless peers, according to the student and her mother.

"The principal just said that they were very sorry for any negative attention that this has brought upon her, and that in the future they would like for her to come to the administration with any safety concerns she has," Watters said in a text message. "[The principal confirmed that she will have no disciplinary action on her record and she can return to school on Monday."

Her daughter, Hannah Watters, 15, was one of at least two North Paulding High School students who were suspended earlier in the week when she and another student shared images and video of the school's crowded interior on the first and second days of its first week back in session.

This is what it looks like even with split dismissal. pic.twitter.com/erCA2lhOUb

Hannah tweeted her news Friday morning, thanking everyone who supported her. She said that she could return to school Monday.

Watters said her daughter would be more than happy to work with the school's administration moving forward.

It's unclear if the other student had his suspension removed.

The school that's about an hour's drive from Atlanta was thrust into the national spotlight this week because of the images, which showed a sea of teens clustered together with no face coverings, and raised concerns among online commenters and parents over how the district is handling school reopenings during the coronavirus pandemic.

Facing a fierce online backlash, Otott told parents and guardians in a letter earlier in the week that the images "didn't look good." But he argued that they lacked context about the 2,000-plus student school, where masks are a "personal choice."

Hannah wore a mask as she captured the inside of her school. On Wednesday, she received a five-day suspension for violating the district's student code of conduct, BuzzFeed News reported. The rules bar students from using social media during the day or using recording devices without the permission of an administrator.

"Not only did they open, but they have not been safe," Hannah told BuzzFeed News. "Many people are not following CDC guidelines because the county did not make these precautions mandatory."

[Ahead of an unusual school year, registration in Anchorage schools points to dropping enrollment]

The teen, who said she'd never before run afoul of the code of conduct, told the news outlet that she understood she broke the rules. But Hannah also said she viewed her punishment as overly harsh.

"I'd like to say this is some good and necessary trouble," Hannah told CNN. "My biggest concern is not only about me being safe, it's about everyone being safe because behind every teacher, student and staff member, there is a family, there are friends, and I would just want to keep everyone safe."

Another student who spoke on the condition of anonymity told BuzzFeed News that he, too, faced disciplinary action for the same reasons.

On Wednesday, Principal Carmona warned students about "consequences" if they copied Hannah and the other student, according to audio obtained by CBS 46.

"Anything that's going on social media that's negative or alike without permission, photography, that's video or anything, there will be consequences," he told students over an intercom announcement.

Hannah had told BuzzFeed that she and her family intended to fight the suspension. Paulding County's school code of conduct says the penalty for using social media or recording devices can range from in-school suspension to expulsion, according to the degree of the offense.

On the basis of the district's policy, Hannah's speech probably would have been better protected had she been off school grounds when she posted a social media message about what happened, said Fred Smith Jr., an associate professor of law at Emory University.

"From a rights perspective, the question I would have is whether or not the school has exercised similar discipline for other students who have posted anything during the school day, especially instances of people posting favorable things," he told The Washington Post on Thursday.

A lack of equal enforcement of the rules could pose a potential First Amendment problem for the school because it could show that the institution applies the rules selectively to speech, he said.

"Schools have a compelling interest in ensuring that there are not substantial disruptions on school grounds," he said. "As long as that's what going on, the school's within its rights."

Otott, the superintendent, emailed a letter to parents Thursday that stated the district will be providing all staff with cloth masks and face shields and will try to reduce crowding in school hallways during class changes.

Social distancing and the wearing of masks are "strongly encouraged," but the district has not required either. It notified parents this month that both would be nearly impossible to enforce on school buses and in classrooms.

Otott said he and his staff will be "reviewing student discipline matters" that happened this week, perhaps referring to Hannah and the other student.

"This is a new environment for all of us, but I want to reassure our community that we are addressing the issues that have come to light," he wrote.

The school district is also gaining more unwanted attention after a video shared on Snapchat allegedly showed a student in a virtual classroom using a racial slur, WXIA-TV reported.

One parent told The Post that her daughter wanted to return to North Paulding High School because she missed the social aspect. Michelle Salas said her daughter, Chelsea, has been horrified by how the school has handled the reopening and by some of her fellow students' dismissal of safety concerns.

Salas said her daughter has been bullied by classmates for being vocal about her disappointment in the school's response to the virus and to Hannah. But, Salas said, that will not prevent her daughter from speaking out about what she sees wrong in the school - even though punitive consequences are possible.

The Washington Post’s Chelsea Janes and Haisten Willis contributed to this report.