Evidence is growing, but what will it take to prove masks slow the spread of COVID-19? 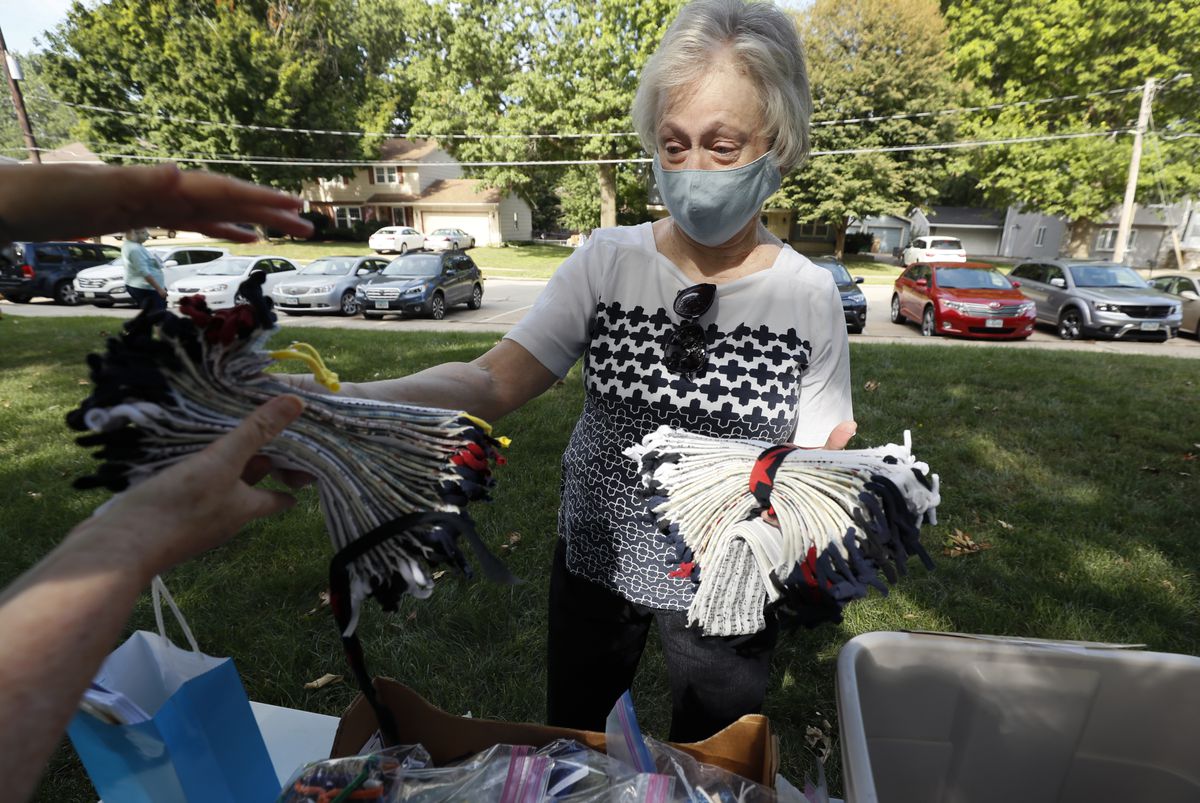 To definitively answer the question of whether face masks protect against the novel coronavirus, here’s what you’d need to do:

• Randomly divide them into two groups.

• Wait a few months, see who gets infected — then try to sort out all possible confounding variables, like compliance, mask fit and social distancing.

A study like that would be not only tough to pull off, but unethical, especially in the midst of a pandemic. It also wouldn't be able to determine community-level effectiveness — that is, how well masks work not just to protect individuals, but to reduce the spread of the disease through a population. For that, you would need multiple experimental groups across multiple cities — which isn't going to happen.

So officials considering mask mandates — as well as citizens weighing how and when to mask up — are forced to act on imperfect evidence. But the path is getting clearer as the sheer volume and variety of studies increases. Some are still preliminary and none meet the so-called gold standard of large, randomized, controlled trials. But collectively they are building a compelling case for universal masking as a low-tech way to help rein in the spread of the virus, and perhaps avoid the need for more painful restrictions.

The new research comes from laboratory tests of masks; observational reports and deep dives into the data from places where masks were and weren’t embraced. There are compelling case studies, including a beauty shop in Missouri where mask-wearing by two unknowingly infected beauticians and dozens of customers seems to have prevented an outbreak. Then there’s the summer camp in Georgia where kids sang and cheered and didn’t wear masks, and more than 250 people got infected.

Modelers at the University of Washington and elsewhere are now leveraging the data that does exist to estimate how many lives might be saved if most people wear masks.

“I don’t think there’s any doubt anymore about the role of masks,” said Dr. Jared Baeten, vice dean of the University of Washington School of Public Health. Baeten was among those who initially questioned the value of masks for the general public, partly to preserve the supply for health care workers, partly because disease prevalence was low, and partly because he — like many other epidemiologists — mistakenly assumed the virus was mainly spread by people with symptoms, who were always advised to wear masks.

What changed his mind was the growing realization that people seem to be most contagious before they feel sick and that some infected people never develop symptoms at all.

"That was the real sea change," Baeten said. If there's no way to tell who's infected, then it makes sense for everyone to wear masks to avoid spreading the virus to others.

In large part, the battle over public acceptance has already been won. More than three-quarters of people in an NPR/Ipsos poll released last week favored state laws requiring face coverings in public, and a previous poll found strong support among both Republicans and Democrats. At least 30 states have adopted some type of mandate, as have most of the largest U.S. cities and major retailers.

But scattered fallout continues, some of it rooted in the conflicted and condescending messaging at the pandemic’s start. Health officials, including the U.S. surgeon general, chided people in early spring for buying face masks and warned they might endanger their own health by using them improperly.

When that advice flipped, anger and suspicion fueled violent encounters, including in Pennsylvania recently when a man asked to cover his face in a cigar store fired a gun at the clerk then later started a shootout with police. President Trump has vowed there will be no national mask requirement, and Georgia’s governor banned local mandates.

In Washington state, a smattering of sheriffs — one of whom now faces a recall petition — said they wouldn’t enforce mask rules. The second-place finisher in last week’s gubernatorial primary was Loren Culp, a police chief from Eastern Washington who describes mask requirements as an infringement on liberty.

Those who oppose masks because they claim they don't work often cite a May article in the Journal of the American Medical Association that supported the use of masks in hospitals, but also said: "We know that wearing a mask outside health care facilities offers little, if any, protection from infection."

The authors, including Dr. Michael Klompas at Harvard Medical School and Brigham and Women’s Hospital, wrote a clarification in June that explains they were referring to passing encounters where the risk of infection is low. They also acknowledged new insights, including a study from Beijing that found mask-wearing was 79% effective in preventing infected, pre-symptomatic people from spreading the virus to family members.

"To me, that's been a strength — that we have been able to constantly adapt as our understanding changes," Klompas said.

Another bit of new evidence comes from Klompas' own hospital system, which adopted universal masking for staff in April and saw the rates of positive tests drop steeply.

"Masks are not 100 percent protective, but they can reduce the risks," said Dr. Chenyu Sun, an internal medicine resident at AMITA Health Saint Joseph Hospital in Chicago and co-author of a recent meta-analysis of 21 studies of masks and a range of respiratory viruses including flu, SARS and one study of the novel coronavirus.

Illustrative of the previous mask research and its limitations is a 2011 experiment where 164 Hajj pilgrims camping in tents were randomized to "mask" and "control" groups. The mask group reported developing fewer flu-like symptoms, but compliance was spotty and laboratory diagnoses showed no difference in infection rates.

On balance, though, Sun and his colleagues concluded that the bulk of the evidence showed masks can reduce the risk of infection by about 65%.

The World Health Organization, which didn't recommend masks for the public until early June, commissioned its own meta-analysis that examined 172 studies of masks and coronaviruses, including SARS and MERS. At the time, only three COVID-19 analyses met the stringent criteria for inclusion.

"I came at this with no fixed notions," said lead author Dr. Derek Chu, of McMaster University in Ontario. "We scoured the Earth for the most credible information available."

The bottom line: "Face mask use could result in a large reduction in risk of infection," particularly when combined with physical distancing and hand washing. But, Chu cautioned, the certainty level is low, largely because none of the studies met that elusive "gold standard."

Another review that focused only on influenza and included some of the same studies was more ambivalent, finding no clear effect from masks or hand-washing, but pointing out the lack of solid evidence.

Oxford University researcher Dr. Trish Greenhalgh is among a vocal group of scientists in health care, economics, sociology and data science who have been urging health agencies and elected leaders to broaden the type of evidence they consider when making high-stakes public health recommendations that have little downside — like face masks during a pandemic.

Stories like the mask-wearing Missouri hairdressers are often discounted as anecdotes, but they "demand a scientific explanation," Greenhalgh said via email. Another example is a crowded flight from Wuhan to Toronto where no one got infected despite a coughing passenger who later tested positive — but wore a mask on the plane.

"The scientific scandal is how many reputable scientists dismissed these important case studies," Greenhalgh said.

To her, some of the most compelling evidence in favor of face masks comes from laboratory tests. A Florida team used mannequin heads to simulate coughing and sneezing and lasers to illuminate the tiny respiratory droplets believed to the main route of transmission. Without masks, the droplets traveled more than 8 feet. A stitched, double-layer cotton mask limited the spread to 2.5 inches.

"It's a bit like a bandage to stop bleeding," Greenhalgh said. "Do we need a (randomized controlled trial) of "bandage on" versus "bandage off," when we can see it's stopped the bleeding?"

Another lab study found surgical masks greatly reduced the amount of virus exhaled by people infected with influenza and the coronaviruses that cause common colds. Yet another team used a bird flu virus as a stand in for the novel coronavirus and showed that even homemade paper and cloth masks could block penetration of more than 95% of virus-laden aerosols.

CDC Director Robert Redfield offered his own homey analogy in a JAMA editorial last month. How many people, he asked, would choose to be operated on by a surgical team that wasn't wearing masks?

As in the operating room, the main focus so far has been on protecting others by blocking the spray from the mouths of infected people. But some researchers are beginning to consider possible benefits to the wearer. If masks reduce the number of viral particles a person breathes in, that could result in a milder infection, Dr. Monica Gandhi, an infectious disease specialist at UC San Francisco, suggests in an upcoming paper.

At the population level, impacts are just starting to come into focus as researchers correlate infection and death data with mask policies and their timing.

Health officials in Washington credit mask usage in Yakima, estimated at 95%, for helping bring down soaring contagion earlier this summer — but they can’t prove cause-and-effect. Researchers in Hong Kong and Germany were able to make stronger cases, reporting an inverse link between mask usage and outbreaks, and a progressive drop in infection rates after masks were required.

A sweeping statistical analysis of nearly 200 countries, which is still under peer review, attempted to parse out the impact of masks from other interventions, like lockdowns and school closures. The researchers found countries that adopted masks early were able to tamp down the epidemic, while those that didn't had large outbreaks within a couple of months.

All of these analyses have weaknesses, but they provide "really, the only kind of direct data we can get about the impact of these population health interventions," data scientist Jeremy Howard, of University of California, San Francisco, argued in a recent presentation to the WHO. Frustrated by inaction on masks, Howard and other scientists started a group called Masks4All to share the data, win over skeptics and help push for state mandates.

Modelers at the UW’s Institute for Health Metrics and Evaluation, who did their own review of existing research, estimate masks reduce viral transmission by about 40%, with an uncertainty range of 20% to 54%, said Theo Voss, who led the project. If 95% of people in the U.S. wear face masks, the UW model predicts almost 67,000 deaths could be averted by Dec. 1.

Even financial institutions are now making the case for masks. A Goldman Sachs analysis found that expanding mask usage by 15% could stave off additional stay-at-home orders that would cost the economy $1 trillion. But the bankers also say the U.S. is unlikely to meet that target without a national mandate.

Baeten, the UW epidemiologist, likens the turmoil over masks

in the U.S. to the agitation that attended the introduction of seat belts. Many people argued they were dangerous and refused to use them. Now everybody buckles up without giving it a thought.

“Why continue to debate?” Baeten asked. “Why not just put the mask on?”