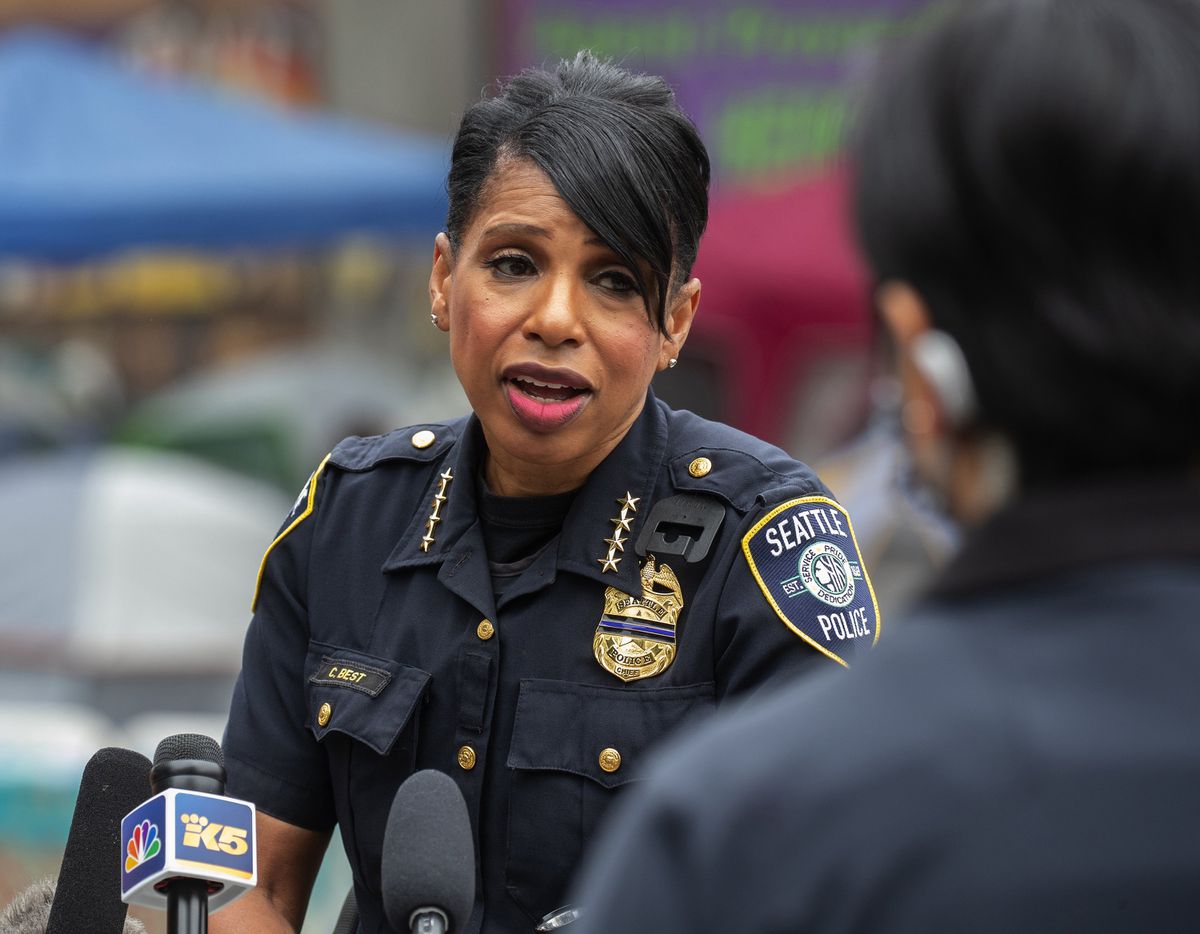 Seattle Police Chief Carmen Best holds a news conference in front of the East Precinct on Monday, June 29, 2020 after an early-morning shooting left one person dead and another injured in front of the station. Best wrote a letter to the Seattle City Council Sunday after protesters showed up outside her Snohomish County home Saturday night. (Mike Siegel/The Seattle Times/TNS)

Seattle Police Chief Carmen Best holds a news conference in front of the East Precinct on Monday, June 29, 2020 after an early-morning shooting left one person dead and another injured in front of the station. Best wrote a letter to the Seattle City Council Sunday after protesters showed up outside her Snohomish County home Saturday night. (Mike Siegel/The Seattle Times/TNS)

SEATTLE -- Police Chief Carmen Best will step down, she has announced, in the wake of protests against police brutality, criticism over the Police Department’s response and votes by the City Council to shrink the police force and cut her wages.

“This was a difficult decision for me, but when it’s time, it’s time,” Best wrote in a Monday night message to Police Department employees.

Best and Mayor Jenny Durkan have scheduled a news conference for Tuesday, the mayor’s office said.

The news about the chief was first reported Monday night on air by KIRO radio’s Dori Monson and on Twitter by Q13 reporter Brandi Kruse, citing anonymous sources.

In her message to “the Women and Men of the Seattle Police Department,” Best wrote she would be retiring, effective Sept. 2. She said news reports had raced ahead of her.

“I wanted you to hear this from me,” wrote Best, the first Black woman to lead the department. “But some media have reached this conclusion on their own.”

In her own note to the Police Department’s employees Monday night, Durkan lauded Best’s work, calling her departure sad for the city.

“While I understand the Chief’s reasons, I accepted her decision with a very heavy heart,” the mayor wrote. “I have had the privilege to be with Chief Carmen Best in so many situations: with her family, at roll calls, in community meetings, and in nearly weekly meetings addressing public safety in Seattle. Her grit, grace and integrity have inspired me and made our city better.”

Durkan added, “I regret deeply that she concluded that the best way to serve the city and help the department was a change in leadership, in the hope that would change the dynamics to move forward with the City Council.”

In an emailed statement, Black Lives Matter Seattle-King County said Best’s retirement is a loss to the movement.

“It does nothing to further our fight for authentic police accountability and the safety of Black lives, that the first Black woman to hold the position of Chief of Police of the Seattle Police Department has been forced out of her job by the Seattle City Council,” the statement from Black Lives Matter said.

“We demand the Seattle City Council stop prioritizing performative action that solely suggests the appearance of change. We demand transparency and accountability for the series of actions and inactions that led to Chief Best’s resignation. And we demand a successor that serves Black Lives.”

The chief’s message didn’t mention why she decided to leave after nearly three decades with the department.

An anonymous source cited by KING5 reporter Chris Daniels on Twitter, described council actions as contributing to her decision.

The chief has taken heat in some quarters, along with Durkan, for allowing officers to repeatedly use tear gas and other “less-lethal” weapons on crowds at Black Lives Matter protests that erupted this year after the police killing of George Floyd in Minneapolis.

When some protesters earlier this month attempted to demonstrate outside Best’s home in Snohomish County and were blocked by neighbors, the chief wrote a letter asking council members to condemn such actions by protesters. The protesters said some neighbors pointed guns at them.

The council, under pressure from protesters and community coalitions to defund the Police Department and invest in alternative approaches to public safety, passed budget amendments Monday intended to start officer layoffs.

The council also voted to reduce the wages of Police Department command staff, including Best, for the remainder of 2020.

Best and Durkan urged the council to delay major budget changes until next year.

In an interview with Monson before the votes, Best said the council’s move might be “somewhat retaliatory.”

“Well, obviously no one wants their salary cut, and so it was disappointing to hear,” she said. “If they were going to do that and do it to every single department head, there might be an argument. But this is absolutely directed to me, just at Carmen Best, because Carmen Best has said what they’re doing is reckless and it’s not well thought out.”

In her message Monday night, the chief called her department “the best” in the country, and assured her employees that “the vast majority of people in Seattle support you.”

Best said Durkan would appoint Deputy Chief Adrian Diaz as interim police chief. Diaz “shares my commitment to this department and has the trust of the community,” she added, concluding her message with the reminder, “Remember to take care of one another.”

Best, 55, became interim chief early in 2018, when Kathleen O’Toole stepped down. A Durkan selection team initially passed over Best for the permanent job, choosing other finalists.

But a backlash among community leaders and some police officers helped lead the mayor to appoint Best. The council voted unanimously to confirm her.

Hired by the Seattle police in 1992, Best completed a variety of assignments, including stints in patrol, school safety, media relations and community outreach.

She also worked as a patrol supervisor and operations lieutenant, and held command positions in the department’s narcotics unit and its robbery, gangs and fugitives unit.

Best briefly served as South Precinct commander before a promotion to assistant chief of criminal investigations. Shortly after O’Toole was appointed chief by Mayor Ed Murray in 2014, O’Toole named Best her deputy chief.