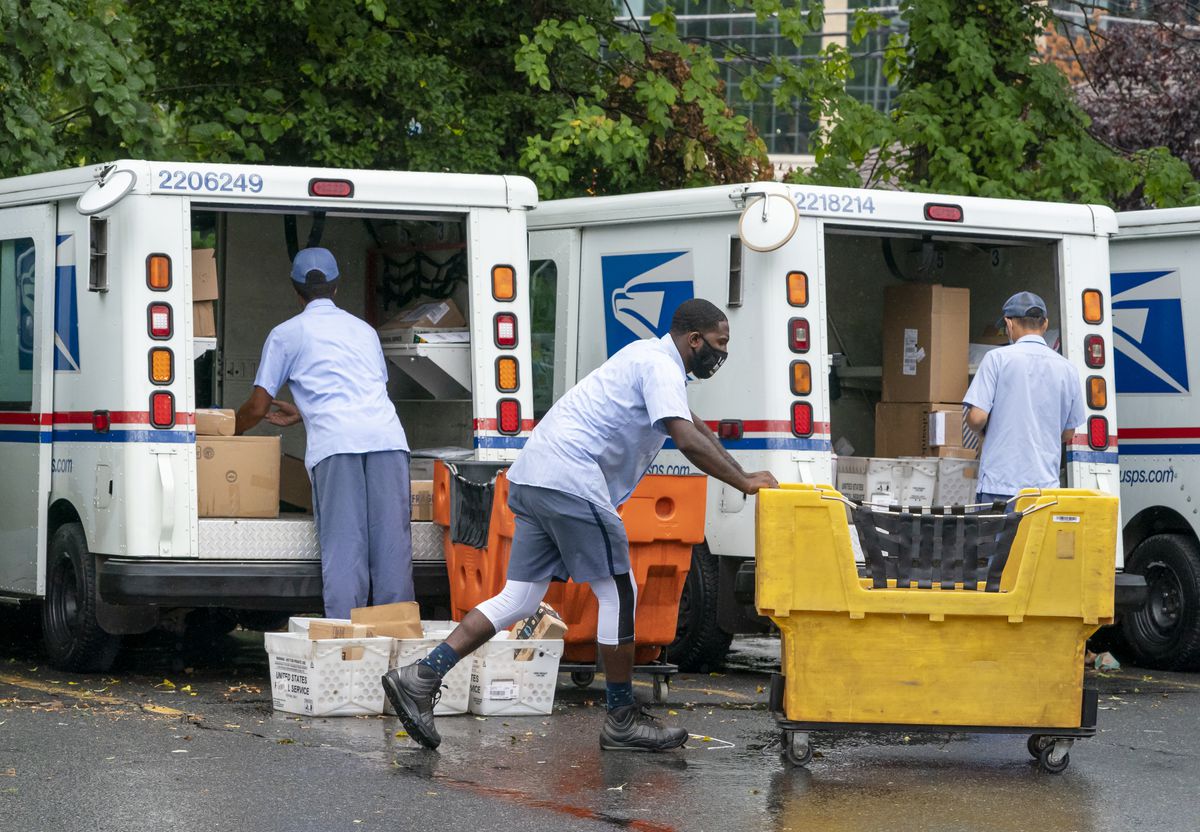 FILE - In this July 31, 2020, file photo, letter carriers load mail trucks for deliveries at a U.S. Postal Service facility in McLean, Va. The success of the 2020 presidential election could come down to a most unlikely government agency: the U.S. Postal Service. (AP Photo/J. Scott Applewhite, File)

FILE - In this July 31, 2020, file photo, letter carriers load mail trucks for deliveries at a U.S. Postal Service facility in McLean, Va. The success of the 2020 presidential election could come down to a most unlikely government agency: the U.S. Postal Service. (AP Photo/J. Scott Applewhite, File)

WASHINGTON — President Donald Trump says the U.S. Postal Service is incapable of facilitating mail-in voting because it cannot access the emergency funding he is blocking, and made clear that requests for additional aid were nonstarters in coronavirus relief negotiations.

Trump, who has been railing against mail-in balloting for months, said the cash-strapped agency's enlarged role in the November election would perpetuate "one of the greatest frauds in history." Speaking Wednesday at his daily pandemic news briefing, Trump said he would not approve $25 billion in emergency funding for the Postal Service, or $3.5 billion in supplemental funding for election resources, citing prohibitively high costs.

In recent weeks, the Postal Service has warned states that long-standing classification practices for ballots and other political mailings may not be enough to ensure timely delivery for the November election, exacerbating Democrats' fears that Trump was using the nation's mail service to aid his reelection bid.

Postal officials advised the nation's secretaries of state to use high-priority first-class postage, which costs 55 cents an item, on election mail rather than the third-class, or bulk, rate of 20 cents typically used.

USPS General Counsel Thomas Marshall informed state leaders that, depending on their respective deadlines for requesting an absentee ballot and casting a vote by mail, sending election items third class may cause voters to miss crucial cutoff points. Bulk mail delivery takes three to 10 days, according to the Postal Service, while first-class mail delivery takes two to five days.

But postal workers have long informally treated election mail — including voter registration materials, voter information and ballots — as first-class items, affording them privileges their 20-cent price ordinarily would not allow.

Democrats worry that the Postal Service may issue new directions for handling election mail, and attribute those changes to the USPS's financial difficulties and DeJoy's cost-cutting mandate. Senate and House Democratic caucuses wrote to DeJoy on Wednesday, urging him not to change election mail processing practices.

"If any changes are made to long-standing practices of moving election mail just months ahead of the 2020 general election, it will cause further delays to election mail that will disenfranchise voters and put significant financial pressure on election jurisdictions," the Senate's 47-member Democratic caucus wrote in a letter drafted by Schumer and Sen. Amy Klobuchar of Minnesota. "Many state deadlines allow voters to request absentee ballot applications and absentee ballots within a few days of Election Day, so it is vital that standard delivery times remain low and pricing remain consistent with past practices to which election officials and voters are accustomed."

House Speaker Nancy Pelosi, D-Calif., and Oversight Committee Chairwoman Carolyn Maloney, D-N.Y., wrote in a letter signed by more than 170 colleagues: "The House is seriously concerned that you are implementing policies that accelerate the crisis at the Postal Service, including directing Post Offices to no longer treat all election mail as first class. If implemented now, as the election approaches, this policy will cause further delays to election mail that will disenfranchise voters and put significant financial pressure on election jurisdictions."

The Postal Service said in a statement that it has long emphasized to election officials that delivery times are based on the class of service paid for by the mailer, including election mail, and that it has consistently recommended that jurisdictions send that mail first-class. It also advised officials to label election mail with a recognized election mail logo and other tags to help postal workers identify and process those items.

"To ensure that voters who wish to use the mail to vote can do so successfully, it is critical that election officials and voters are mindful of the time that it takes for us to deliver ballots, whether it is a blank ballot going to a voter or a completed ballot going back to election officials," the agency said. "In other words, the time required for both legs of a ballot's delivery through the mail must be taken into account. In many cases, certain deadlines concerning mail-in ballots may be incompatible with the Postal Service's delivery standards, especially if election officials use marketing mail to send blank ballots to voters.

"Using marketing mail will result in slower delivery times and will increase the risk that voters will not receive their ballots in time to return them by mail."

Democrats rallied to the Postal Service's defense this spring, when it sat on the brink of insolvency. Postal officials warned at the outset of the pandemic that declines inn mail volume could have led the agency to run out of money in October. As Congress agreed to a $13 billion emergency grant for the USPS in an early round of coronavirus relief spending, Trump threatened to veto the bill - worth $2 billion and full of funding for unemployment benefits, small businesses and national security industries - if it included any direct funding for the Postal Service.

The White House agreed only to loan the USPS $10 billion, which Treasury Secretary Steven Mnuchin leveraged to try to bring the Postal Service more heavily under the administration's control.

The Postal Service's bipartisan, Republican-dominated governing board appointed DeJoy postmaster general in May. Postal analysts worried that Mnuchin, who was routinely briefed by postal officials on the hiring process, installed a Trump loyalist to run the agency as the election neared.

In past elections, when states have chosen to send election mail under third-class designations, postal workers were instructed to treat those items as though they were first-class. USPS managers and postmasters must keep a log of all election and campaign mailings their offices receive, according to the postal operations manual, and must document any delays in that mail's distribution.

"Every political season we treat political mail like first-class mail. It was always the priority to go out. Now they're treating it like bulk-rate mail," said one postal worker in Michigan, who spoke on the condition of anonymity to avoid retribution. "We recycle the bulk-rate mail that doesn't go out. But first-class mail, we always try to get it to you. We forward it if you moved, we try to find you.

"Now we're recycling political mail. It's supposed to go back to the candidate that sent it to us," the worker said. "Keeping up a log is the lowest form of accountability, the lowest form of keeping track of this mail. But we're not doing it."

Election mail is not commingled with other mail on shop floors and is often sorted by hand, rather than by processing machines.

Senate Democrats asked DeJoy, a former logistics executive and ally of Trump who took office in June, to clarify the agency's practice on prioritizing election mail before the 2020 election season, and whether the practice will continue. They also asked for communication with local and state election officials "regarding the service standards that will be applied to election mail."

In a meeting with DeJoy, Mnuchin and White House Chief of Staff Mark Meadows last week, Pelosi and Schumer demanded the postmaster general rescind those directives and said they were an obstacle to negotiating a "Phase IV" coronavirus relief package.

Maloney on Wednesday introduced legislation to block DeJoy from changing operations or service standards until after the pandemic ends.