‘We’ve got to do better than this’: College students raise alarm by packing bars, avoiding masks 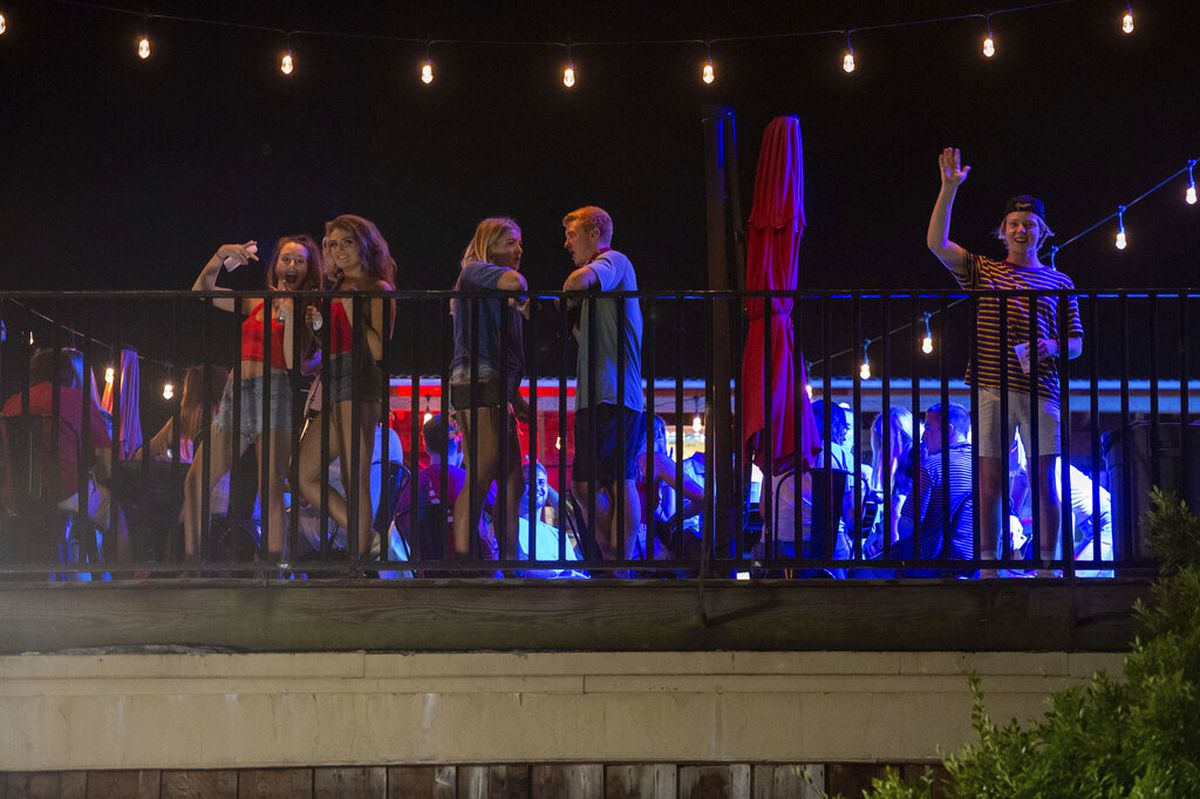 Patrons stand on the Bear Trap's rooftop bar on The Strip, the University of Alabama's bar scene, Saturday, Aug. 15, 2020, in Tuscaloosa, Ala. More than 20,000 students returned to campus for the first time since spring break, with numerous school and city codes in effect to limit the spread of COVID-19. (AP Photo/Vasha Hunt)

Patrons stand on the Bear Trap's rooftop bar on The Strip, the University of Alabama's bar scene, Saturday, Aug. 15, 2020, in Tuscaloosa, Ala. More than 20,000 students returned to campus for the first time since spring break, with numerous school and city codes in effect to limit the spread of COVID-19. (AP Photo/Vasha Hunt)

Music blared outside a row of off-campus houses on Saturday near the University of North Georgia as hundreds of students packed the streets and front yards. Virtually no one wore a mask.

The huge party in Dahlonega, Ga., captured in a viral Twitter video, was one of a number of mass gatherings around the country this weekend as tens of thousands of students returned to college towns already on edge amid the novel coronavirus pandemic.

Local officials from Georgia to Alabama to Oklahoma reacted with horror and anger on Sunday, warning that unless students take social distancing and mask rules seriously, the fall semester could come to a swift end.

"Why?" tweeted Walt Maddox, mayor of Tuscaloosa, Ala., above a photo of hundreds of mostly mask-free University of Alabama students outside downtown restaurants. "We are desperately trying to protect @tuscaloosacity."

Some universities are already battling COVID-19 outbreaks, including the University of North Carolina-Chapel Hill - where four different viral clusters have emerged one week after in-person classes started - and Oklahoma State University, where a single sorority house now has 23 confirmed cases. In-person classes for undergraduates were canceled Monday.

There’s no national consensus on how to approach college this fall, with many schools going at least partially online and others trying mass testing of students. But other large schools are welcoming everyone back to campus and relying on masks and social distancing to avoid outbreaks - a plan, as local leaders noted this weekend, that could crumble if students don’t abide by the recommendations.

In Dahlonega, university officials chided the hundreds of students who gathered at an off-campus housing complex for the Saturday night party. In-person classes are scheduled to start Monday for the school's roughly 19,000 students.

"We are disappointed that many of our students chose to ignore COVID-19 public health guidance by congregating in a large group without social distancing or face coverings," a school spokeswoman told the Gainesville Times.

At Alabama's two biggest schools, football players were particularly vocal in sounding the alarm as they watched fellow students congregating without face coverings. Although many of college football's biggest conferences have already canceled their fall seasons, the Big 12, ACC, and SEC are pushing ahead - assuming campus outbreaks don't interfere.

At Auburn University, wide receiver Anthony Schwartz tweeted Saturday that he had "seen crowds of people and none of them are wearing masks." Chris Owens, a center at the University of Alabama, tweeted a photo on Sunday afternoon of a crowd of students with barely any face coverings in sight, asking. "How about we social distance and have more than a literal handful of people wear a mask? Is that too much to ask Tuscaloosa?"

"Who wants college sports this fall?? Obviously not these people!!" he tweeted Sunday. "We've got to do better than this for each other and our campus community. Please wear your masks!"

Maddox, the mayor, said he would ask the school's police force to help Tuscaloosa police enforce mask rules. "Wearing a mask and practicing social distancing is not much to ask for to protect yourself, your family, your friends ... and the jobs of thousands of people," he tweeted.

In Stillwater, Oklahoma, the editor at Oklahoma State's student newspaper shot videos this weekend of packed clubs and bars and long lines outside downtown establishments.

The campus was already on high alert after the school announced Saturday that it had quarantined dozens of students inside the Pi Beta Phi sorority house following at least 23 positive tests on Friday. "I've decided ... I'm not going to class on Monday," Tre Sterling, a defensive back on OSU's football team, tweeted above videos of student crowds downtown.

Stillwater Mayor Will Joyce said the city council would consider new pandemic rules on Monday, including an "emergency declaration, if necessary."

“Every single person in Stillwater has a responsibility to help,” he tweeted. “Take every precaution you can to slow the spread. Wear your mask, avoid crowded areas, wash your hands, be a good neighbor.”