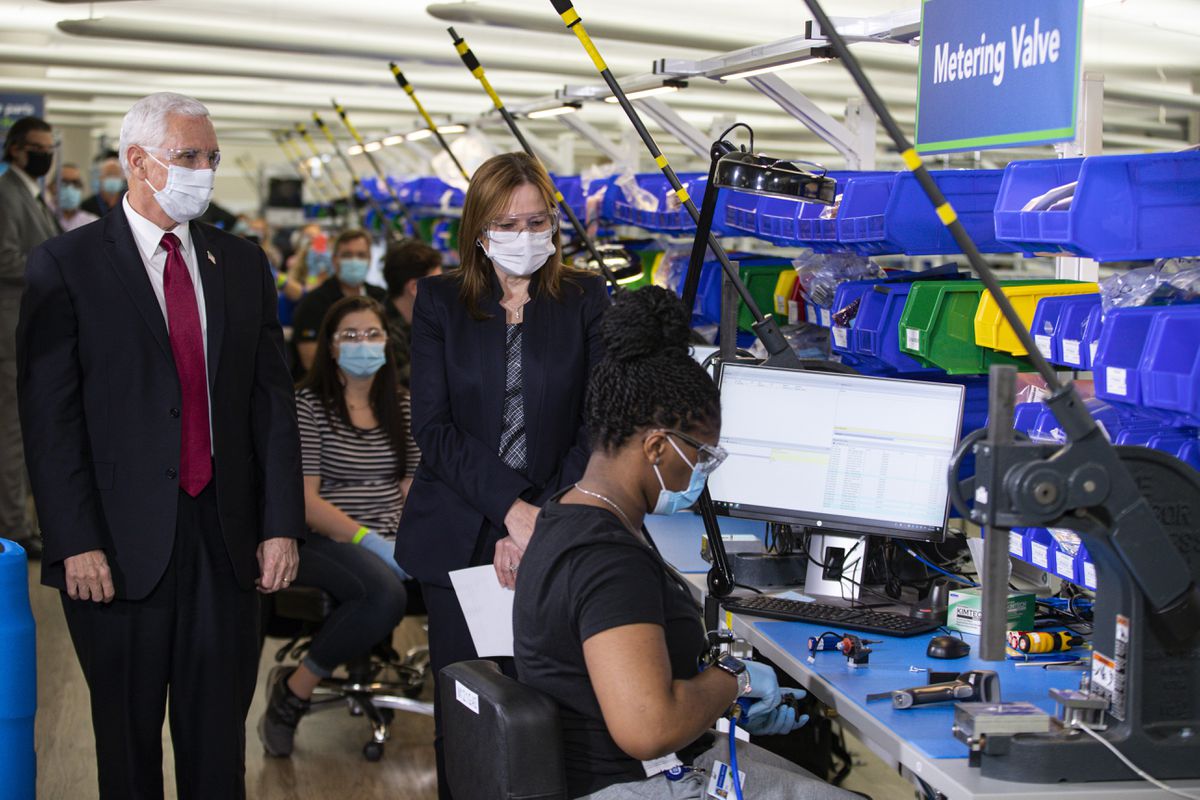 SAN FRANCISCO - Months into a $3 billion U.S. effort to manufacture tens of thousands of ventilators to stave off coronavirus deaths, the government stockpile is facing a glut.

General Motors and Ford by early May began delivering the first ventilators they scrambled to manufacture, in part compelled by President Donald Trump's invocation of the federal Defense Production Act. General Electric, Philips and other manufacturers' efforts have delivered more than 94,000 of them to the stockpile, and General Motors plans to soon hand over its business to a counterpart.

During the first weeks of the covid-19 crisis in March, health officials panicked over an anticipated shortage of ventilators, breathing machines that were essential to help keep patients alive. But during the months it took for companies to develop their supply chains, test prototypes and train workers to build them, the approach to treating covid-19 changed.

Now, unexpectedly, the vast majority of ventilators are going unused. The Department of Health and Human Services said it had handed out 15,057 ventilators by Friday, and there were 95,713 ventilators in the federal stockpile. Of those, 94,352 came from contracts signed since the beginning of the pandemic.

"In the fog of war against the virus, we were trying to do our best to protect the health and safety of the American people," said Peter Navarro, White House trade adviser and Defense Production Act policy coordinator. "In this particular chess game, the best move was to make sure we had too many ventilators rather than too few." Navarro said that excess ventilators will be used to help other countries fighting the novel coronavirus, either as revenue-generating exports or as donations.

The misalignment between the availability and need for ventilators shows that the medical understanding of and response to the coronavirus has moved faster than companies can adapt. And for Ford, which got the order to supply the largest quantity of ventilators to the federal stockpile, production and delivery were delayed, further throwing it out of sync with the pandemic needs.

In April, doctors and other medical experts worried that the government's orders of ventilators would be too little, too late to meet the initial peak in cases in the spring. But the curve of infections has stretched out for longer than initially projected - and the treatment evolved.

Instead of intubating patients - more common for hospitalized patients during the early weeks of the coronavirus pandemic - doctors are more likely to turn to a variety of breathing treatments. They range from flipping patients onto their sides or stomachs to aid in breathing to using high-flow nasal cannula systems, or continuous or bilevel positive airway pressure machines used for patients with sleeping disorders.

"I do think we're getting better in that we don't reflexively just have to put people on ventilators," said Amesh Adalja, an infectious-disease expert at the Johns Hopkins Center for Health Security. "As the pandemic progressed, we got much more comfortable with managing people on high levels of noninvasive ventilation."

The Department of Health and Human Services acknowledged there is a surplus.

"While there is not currently a shortfall of ventilators in the [strategic national stockpile] inventory, the new ventilators procured during the covid-19 response will ensure the United States is prepared to respond to any hot spots in the coming months as well as future public health emergencies," an HHS spokeswoman said, adding, "Many states initially requested far more ventilators than they actually needed," leading to the surplus.

Officials say now they have no additional plans to award contracts for ventilators. Some states are returning devices they no longer need, contributing to the glut.

The United States ordered double the number of ventilators needed in the worst-case scenario, which involved no equipment sharing between states and which drew from the strategic national stockpile, said Dan Adelman, professor of operations management at the University of Chicago's Booth School of Business, who authored a paper in April on the country's estimated ventilator need as the pandemic surged. That scenario, which paired case projections from the University of Washington's Institute for Health Metrics and Evaluation with estimated ventilator need, would have called for just over 100,000 ventilators.

"The scenario that actually ended up happening was substantially lower than that," he said in an interview.

In April, the U.S. had 10,000 ventilators in the national stockpile, far short of the 32,000 the Institute for Health Metrics and Evaluation estimated would be needed by the peak in the middle of that month.

Trump called on Ford and GM to fire up their production lines, and the federal government approved billions of dollars in contracts. As the government contracts were yielding their first deliveries at the end of April, Trump had declared the United States the "king of ventilators."

But as time went on, concerns emerged about the use of the devices, including that they risked hurting breathing-compromised patients and that intubating patients put hospital workers at risk of contracting the virus through respiratory droplets, according to medical experts who spoke with The Post in July. The share of hospitalized patients who ended up on ventilators decreased.

Meanwhile, states struck their own agreements to obtain ventilators - with regional sharing networks emerging that lessened the overall reliance on the federal stockpile. They drew on an estimated 62,000 ventilators in hospital systems scattered across the states, according to figures developed for the American Hospital Association. They also contracted medical device suppliers to build ventilators piecemeal, usually in the dozens or hundreds.

But ventilator manufacturing on a mass scale was just getting going. GM, Ford and others launched into what they viewed as a World War II-like mission, harnessing a sense of duty to deliver on critical supplies.

GM tapped its vast auto supply chain to start manufacturing ventilators parts and hired hundreds of workers to staff an Indiana precision electronics plant and scale up manufacturing of the devices.

GM anticipates its Kokomo, Ind., manufacturing plant will remain open beyond August, after the initial government contract of 30,000 ventilators from Ventec Life Systems is fulfilled, because the pandemic has not slowed. But GM plans to hand operational control over to Ventec, which plans to continue manufacturing ventilators at the facility after leasing it from the automaker, GM spokesman Dan Flores said.

Philips quadrupled its output in July to 4,000 ventilators a week from its March rate, adding shifts, bringing on extra production workers and redirecting resources from its other businesses to assist in the ramp-up, said company spokesman Steve Klink. It was a production ramp-up that would ordinarily have taken one to two years to build complex devices consisting of more than 650 components and more than a million lines of computer code. The company added production lines at its manufacturing sites in California and western Pennsylvania, Klink said. The 4,000 devices per week were an eightfold increase from the company's output before the pandemic.

At Ford's Midwest manufacturing hub, where production lines famously pump out an F-150 truck every 60 seconds, a factory in Ypsilanti, Mich., now boasts another distinction: churning out a ventilator once per minute.

But the push to build ventilators has also run into hiccups: Ford's effort to build 50,000 ventilators by mid-July was delayed after the company ran into global parts shortages. The company, which is working with General Electric to supply a device called the Airon pNeuton Model A-E ventilator, had made fewer than half the devices by its initial deadline. The companies said that they had to find new suppliers for about a third of the parts because the devices hadn't previously been made at the scale required by the contract.

As a result of the initial delays, the government gave Ford and GE a contract extension until the end of August, a deadline the companies are on track to meet.

Still, as ventilators pile up, the usefulness of some of the devices to the fight against covid-19 remains a question. The machines don't appear to be in high demand.

“To date, HHS has not received any requests specifically for noninvasive ventilators,” the HHS spokeswoman said. “Some [stockpiled] ventilators have more sophisticated capabilities; however, every ventilator deployed from the [stockpile] to date can support covid-19 patients.”