‘Like Armageddon’: Rotting food, dead animals and chaos at postal facilities amid cutbacks 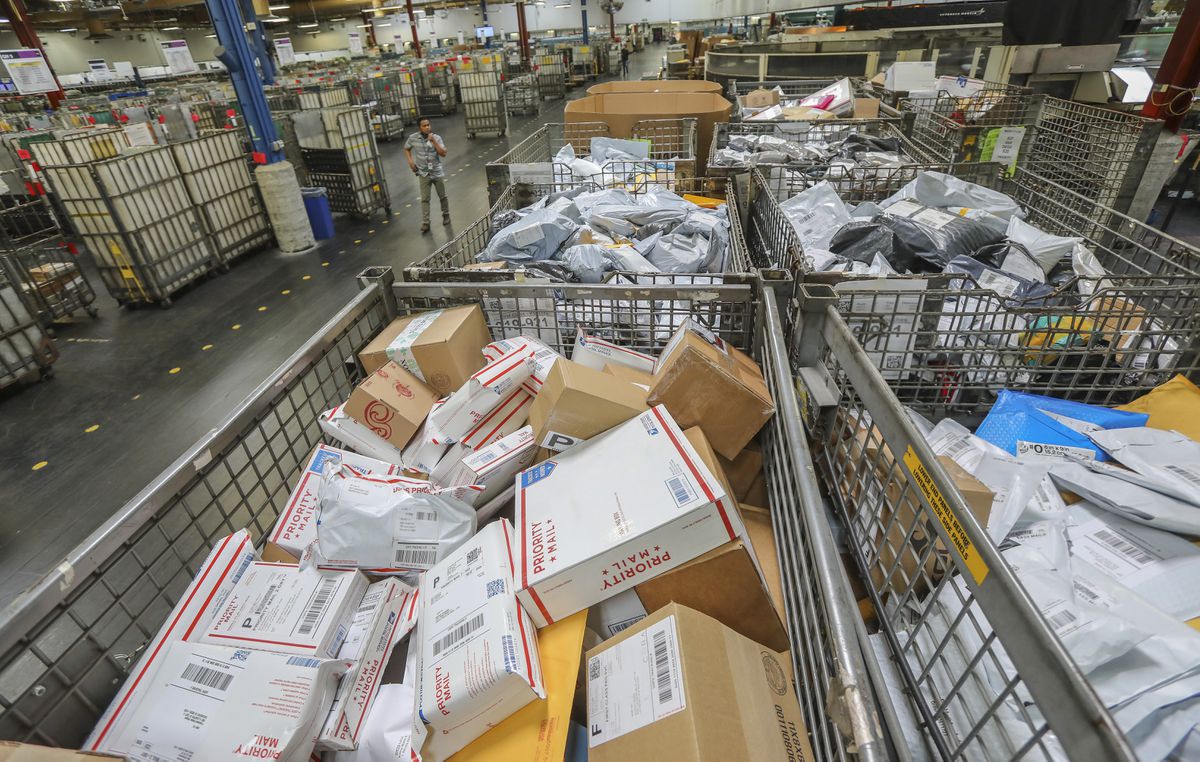 Postal workers sort parcels at Margaret L. Sellers Processing and Distribution Center at the USPS Carmel Mountain Post Office on May 14, 2020 in San Diego, California. The post office is seeing a huge increase in the amount of packages its handling. (Eduardo Contreras/The San Diego Union-Tribune/TNS)

Postal workers sort parcels at Margaret L. Sellers Processing and Distribution Center at the USPS Carmel Mountain Post Office on May 14, 2020 in San Diego, California. The post office is seeing a huge increase in the amount of packages its handling. (Eduardo Contreras/The San Diego Union-Tribune/TNS)

Six weeks ago, U.S. Postal Service workers in the high desert town of Tehachapi, Calif., began to notice crates of mail sitting in the post office in the early morning that should have been shipped out for delivery the night before.

At a mail processing facility in Santa Clarita in July, workers discovered that their automated sorting machines had been disabled and padlocked.

And inside a massive mail-sorting facility in South Los Angeles, workers fell so far behind processing packages that by early August, gnats and rodents were swarming around containers of rotted fruit and meat, and baby chicks were dead inside their boxes.

Accounts of conditions from  employees at California mail facilities provide a glimpse of what some say are the consequences of widespread cutbacks in staffing and equipment recently imposed by the  postal service.

Postmaster General Louis DeJoy, responding to a national outcry over service disruptions and fears of voter disenfranchisement, said this week he would suspend many planned changes until after the election. But postal workers say significant damage has already been done, including the removal of mail-sorting machines, which may not be replaced.

While the long-term effect of the cuts on U.S. mail service is unclear, the evidence of serious disruptions appears to be mounting, according to postal employees interviewed by The Times as well as customers, lawmakers and union leaders.

Until this week, the postal service was implementing a sweeping plan to remove 671 mail-sorting machines, or about 10% of its total, from facilities across the U.S. — including 76 in California. Officials also slashed overtime pay and imposed a new policy that could delay outgoing mail.

The cuts have had a ripple effect in California, snarling the operation of one of the biggest mail-processing facilities in the country and delaying the delivery of prescriptions, rent payments and unemployment checks. Some people have complained of going days without receiving any mail at all.

Processing plants serve more than 1,000 California post offices, some of which deliver to far-flung, rural addresses that could be faced with  high delivery costs if serviced by private mail carriers.

Each of those machines, which would handle mail-in ballots, can process up to 35,000 pieces of mail per hour.

"A lot of the machinery has already been gutted. Some of it has been dismantled and relocated or trashed," Gonzalez said. "Although we welcome the news of the suspension of these changes, it's just that — a suspension. The attacks and undermining of our operations will resume, maybe at the worst possible time, in December, our peak season."

Before the recent cuts, workers at the facility were working six days per week, and were still struggling to keep up with the volume of packages driven by an influx of online shopping during the COVID-19 pandemic, said mail handler Aukushan Scantlebury, 47.

When DeJoy restricted overtime two months ago, Scantlebury and other workers saw their schedules cut back to five days per week. Within days, he said, the facility was in chaos.

Packages piled up, blocking the aisles and the heavy sorting machinery. Boxes of steaks, fruit and other perishables rotted. Rats dashed across the floor. At one point, Scantlebury said, the "whole building was filled with gnats."

The delays were particularly tragic for live animals, including baby chickens and crickets, that are transported through the U.S. Postal Service. Usually, mail handlers say, they can hear the birds peeping and rustling around in their boxes.

This month, one worker said, she found a box with air holes in a pile of packages. Instead of hearing the gentle sounds of baby chicks, she heard nothing.

Workers sometimes see shipments of crickets jumping around inside their packaging, said Eddie Cowan, a mail handler and the president of a local chapter of the National Postal Mail Handlers Union. Now, he said, "you can see in the packages those crickets are dead."

Sumi Ali, the co-owner of the Yes Plz coffee subscription company, arrived July 25 to mail a batch of freshly roasted beans to customers. A frequent visitor to the complex, he was shocked at what he saw.

The parking lot was crammed with semi trailers piled high with unsorted mail; the warehouse-like facility was packed "wall to wall" with mail; and there were very few employees in sight.

"It was like Armageddon," Ali said. "It was a total maze. You could not walk through the facility without having to move things out of your way. I don't know how they got forklifts through there. There were only inches of space between containers."

Since then, Ali said, the backlog of packages seems to have improved a little. But, he said, the chaos continues to be as bad, if not worse, than the usual holiday season.

House Speaker Nancy Pelosi (D-San Francisco) said Wednesday that DeJoy informed her he did not intend to restore the removed sorting machines or blue mailboxes that have been removed in several cities, nor did he have plans to allow for adequate overtime for workers.

As for the November election — the spark that ignited a national firestorm over USPS cutbacks — postal service and California elections officials say there's less concern here than in other states.

USPS spokesman David Partenheimer did not comment on the reductions, but referred to a statement from DeJoy that said the postal service is equipped to fully handle election mail this fall.

The postal service also said DeJoy was expanding a task force to strengthen coordination with election officials to handle mail-in ballots. The postal service had earlier warned 46 states, including California, that some ballots might not be delivered in time to be counted.

"Given this administration's track record with the truth, seeing is believing," Padilla said in a written statement. "My office will continue constant communication with the U.S. Postal Service, and will continue to monitor for any signs of disruption to service."

At the Santa Clarita processing and distribution center, two delivery bar code sorters were padlocked and gutted of their cameras and computers in July so that workers couldn't plug them in and start using them again.

For an unknown reason, the devices came back online Wednesday, but a third delivery bar code sorter was missing from the facility, according to a worker who did not want to named because they were not authorized to speak on behalf of the agency.

Merchant Stephen Tu of Pasadena said in the past two months he has noticed his first-class packages have been getting stuck for as many as 10 days in the Santa Clarita facility, whereas normally they would pass through in one day. Tu, who tracks shipments of baby clothing and accessories he sells on EBay and Facebook Marketplace, said he's never endured delays this long — up to 20 days for packages sent outside Southern California — in the 15 years he has been selling items online.

Tu said his customers sometimes ask him whether he has even shipped their goods at all. In order to guarantee on-time deliveries, he said, he's considering switching to private services like FedEx and UPS.

About six weeks ago on a Wednesday morning, postal clerk Kenny Diaz, 35, showed up to work at the Tehachapi post office and saw something new in his nine years on the job: a plastic tub full of mail that should have gone out for delivery the night before.

Every afternoon, Diaz said, a truck driver picked up the post office's outgoing mail and took it to a processing facility in Bakersfield. If the post office was running behind, the last driver of the day would wait to pick up every bill, package and letter, he said.

Now, Diaz said, the truck drivers have been instructed to leave on time, regardless of whether all the outgoing mail is on the truck. That means some mail is arriving a day later  at the processing facility, where it could be delayed again, he said.

"Just think of our little town, times a million across the nation," Diaz said. "You can see the domino effect that it's going to have."