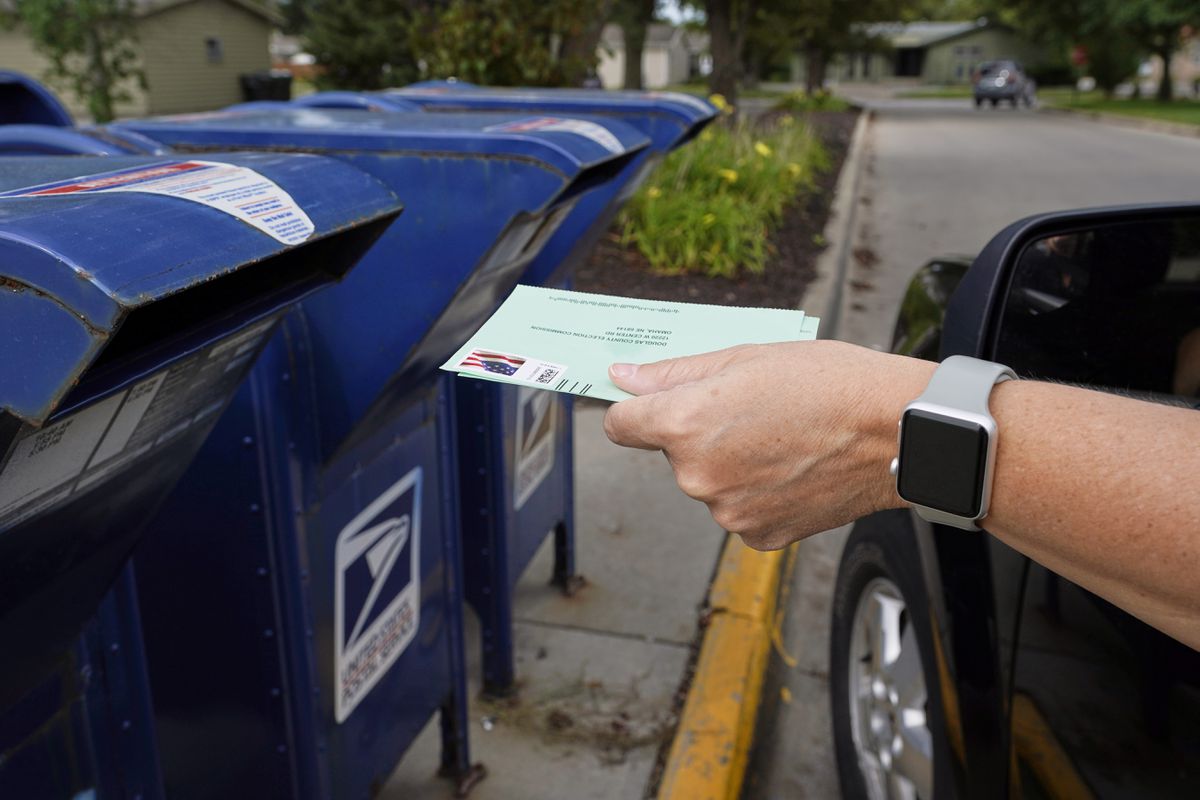 WASHINGTON - Postmaster General Louis DeJoy has mapped out far more sweeping changes to the U.S. Postal Service than previously disclosed, considering actions that could lead to slower mail delivery in parts of the country and higher prices for some mail services, according to several people familiar with the plans.

The plans under consideration, described by four people familiar with Postal Service discussions, would come after the election and touch on all corners of the agency's work. They include raising package rates, particularly when delivering the last mile on behalf of big retailers; setting higher prices for service in Alaska, Hawaii and Puerto Rico; curbing discounts for nonprofits; requiring election ballots to use first-class postage; and leasing space in Postal Service facilities to other government agencies and companies.

DeJoy, a former logistics executive and ally of President Donald Trump, envisions aggressive cost-cutting maneuvers that he and other conservatives say are necessary to strengthen the agency's financial footing. But they also represent the biggest reshaping of the agency in generations and would likely draw severe criticism from people and organizations that rely on the mail service for timely delivery, particularly in less populated regions of the country.

DeJoy - the first postmaster general without a history at the agency in 28 years - who took over in June - began implementing policies within eight weeks of taking office, but temporary backed off this week amid heavy criticism the moves were causing delays in mail delivery and could undermine the November election, which will rely heavily on absentee ballots because of the coronavirus pandemic.

DeJoy is set to testify Friday in the Senate and again Monday in the House about the status of the service. The USPS did not respond to requests for comment Thursday, and it is possible he will change the particulars of any plans under discussion after the election.

Still, he has made clear he intends to introduce long-term change.

“I came to the Postal Service to make changes to secure the success of this organization and its long-term sustainability,” he said Tuesday, in announcing temporary suspension of controversial policies such as limiting overtime for postal workers and dismantling mail sorting machines. “I believe significant reforms are essential to that objective, and work toward those reforms will commence after the election.”

DeJoy has told associates that he was brought in to stem the Postal Service's losses and that drastic changes were needed to make the agency solvent. He is determined to stay the course and make wholesale changes after the election, an associate who spoke with him recently said.

The Postal Service carries $160.9 billion in debt and has struggled financially for years as volumes of first-class and marketing mail - its most profitable products - tumbled. The USPS also is grappling with a crush of packages as consumers have become more reliant on e-commerce to avoid venturing out during the pandemic, creating logistical problems for an agency designed to move paper, not boxes.

Over the summer, the Postal Service began taking 671 high-speed mail sorters offline, and removing and sometimes relocating dozens of mailboxes in Oregon, Montana, Arizona, Ohio, Pennsylvania, California and other states. The moves sparked an outcry from Democrats and voting rights watchdogs, who worried about potential mail slowdowns heading into the election.

The Postal Service's general counsel Thomas Marshall in July warned 46 states that their voting deadline requirements were "incongruous" with mail service, and that they should pay first-class mail rates to ship ballots, rather than the cheaper bulk rates typically used. Though postal workers have historically afforded ballots first-class treatment regardless of postage price, the agency has refused to clarify at the national level whether those norms would continue.

On Tuesday, when DeJoy announced the suspension of policies blamed for slowing mail down, he said that USPS retail hours would not be changed, all mail processing facilities would remain open, overtime hours would be reauthorized and "mail processing equipment and blue collection boxes will remain where they are." His announcement did not mention election mail postage costs.

Among the most significant potential changes would allow the Postal Service to transport its most profitable products - first-class and marketing mail - and periodicals via trucks and trailers, rather than airplanes.

The plans do not include any infrastructure spending, something Democrats have clamored for as consumer habits change during the pandemic and private-sector competitors use the new demand to build out their distribution networks. The Postal Service is in need of new trucks, equipped to carry more packages than paper mail, experts say, and new machines that can process packages.

It is unclear which of the ideas DeJoy can enact unilaterally, and which require the review of the Postal Regulatory Commission, USPS's governing board and Congress. Operational changes - strictly how the agency handles mail items - fall under the postmaster general's purview, though Congress can impose a statutory requirement. Changes to "standards," or price points for delivery products, require review by the regulatory commission.

Policymakers and previous postal officials have discussed some of the proposals for years, but DeJoy's ideas go further, the people say.

"They go directly to the heart of what Democrats have been saying this postmaster general wants to do to the Postal Service," said one of the people, who like others, spoke on the condition of anonymity to discuss internal USPS strategy. "This is going to get very hot very fast."

"The theme might be construed as there's no free lunch," said Kevin Kosar, who studies the Postal Service at the libertarian think tank R Street. "Postal policy has a whole lot of competing objectives. On the one hand, we're supposed to have a postal policy that serves everyone easily no matter what the costs may be. At the same time we want the Postal Service to break even. For some reason we're still fixated, despite the mail volume drop-off, to deliver mail six days a week. It has a highly unionized workforce that bargains for working conditions on the shop floor

Among the most significant changes are policies that would allow the Postal Service to transport its most profitable products - first-class and marketing mail - and periodicals via trucks and trailers, rather than airplanes.

Package rate increases, especially on private shippers who contract with the Postal Service for "last mile" shipping from distribution centers to a customer's home or business, have long been Trump priority. In April, after calling the Postal Service "a joke," Trump said that he would not approve emergency coronavirus finding for USPS unless it quadrupled package prices.

DeJoy's potential plans, the people said, also include eliminating the Alaska Bypass program, a federal program exclusive to the state in which the Postal Service subsidizes the cost of freight shipping of groceries and other goods for remote areas to keep its commitment to universal service. The program costs USPS about $100 million a year. The Postal Service would look to discontinue the program, the people said, unless Congress specifically earmarked funding for it.

"Eliminating the Alaska Bypass in the minds of other senators would perhaps set a precedent," Kosar said. "What does it mean for Puerto Rico, for American Samoa, for Hawaii? Are they the next ones going to be presented with a higher bill? The elimination of it would raise political alarms well beyond Alaska."

Democratic officials, including House Oversight Chair Carolyn Maloney called for DeJoy's resignations after his previous policies on overtime and mail delivery trips. The postmaster general spoke with party leaders, including House Speaker Nancy Pelosi of California and Senate Minority Leader Charles Schumer of New York this week in preparation for the upcoming hearings.

The NAACP also announced a lawsuit against DeJoy and the Postal Service, joining more than 21 states and other advocacy groups to argue that DeJoy lacked the authority to make cost-cutting changes unilaterally.

DeJoy met Wednesday with Sens. Gary Peters, D-Mich., and Thomas Carper, D-Del., the Senate committee's top Democrats on postal issues. When pressed on details for post-election plans, DeJoy did not mention these proposals, according to Carper's office.

"Americans are experiencing delays and postal workers are seeing changes with their own eyes, and, yet, congressional offices have been told for weeks that nothing has changed at the Postal Service. We know now that wasn't true," Carper said in a statement. "Make no mistake, if these reckless policies are implemented it will undermine this American institution and hurt seniors, rural communities, small businesses and households that lack access to broadband the most."

Industry groups have also grown wary of DeJoy's policies. The Greeting Card Association, though it does not support Democratic legislation in the House to prohibit the Postal Service from making operational changes before the election, wrote to Maloney on Wednesday decrying the "lack of transparency" around DeJoy's previous policy changes.

“The GCA has been skeptical of the benefit in degrading service standards, and believes that such measures typically fail to generate intended savings while driving customers away from the system,” the group’s president, George White, wrote. “We oppose any further reduction in service standards during the pandemic crisis.”