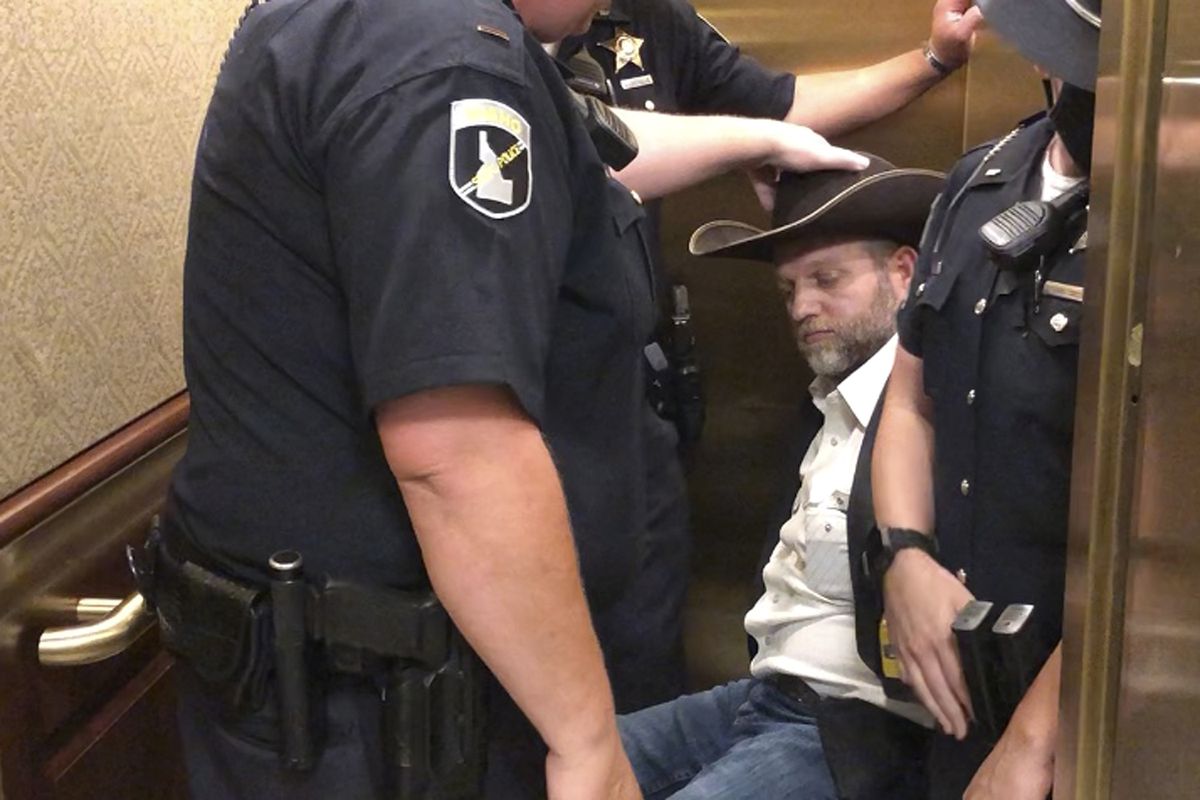 This image taken from video shows anti-government activist Ammon Bundy, rear, being wheeled into an elevator in a chair following his arrest at the Idaho Statehouse in Boise, Idaho, Tuesday, Aug. 25, 2020. Authorities arrested Bundy after he refused to leave a meeting room where a few hours earlier angry protesters forced out lawmakers. (AP Photo/Keith Ridler)

This image taken from video shows anti-government activist Ammon Bundy, rear, being wheeled into an elevator in a chair following his arrest at the Idaho Statehouse in Boise, Idaho, Tuesday, Aug. 25, 2020. Authorities arrested Bundy after he refused to leave a meeting room where a few hours earlier angry protesters forced out lawmakers. (AP Photo/Keith Ridler)

BOISE -- The Idaho man best known for being tried but not convicted in two federal standoffs involving armed citizens was arrested Tuesday at the Idaho Statehouse for suspected trespassing.

Ammon Bundy, 44, and several other organizers were in the Lincoln Auditorium at the Capitol when a disturbance among members of the public began and Idaho State Police troopers were called in.

The Lincoln Auditorium was supposed to host the House Judiciary, Rules and Administration Committee Hearing, but chairman Rep. Greg Chaney, R-Caldwell, moved the hearing to another room in the east wing after an earlier disturbance.

Initially, the meeting was disrupted when members of the public — at least some apparently part of the anti-vaccination advocacy group Health Freedom Idaho — refused to move out of reserved press corps seats.

The Lincoln Auditorium has a desk with a few seats for the Capitol Correspondents. The seats are for properly credentialed media members only. Chaney asked the people to move from the seats, after troopers had warned them that they did not qualify as credentialed media. When they moved back to the seats, Chaney told them they needed to leave.

Several people in the room started shouting and troopers came into the room. All lawmakers left the room and moved to a different hearing room to continue with their legislative agenda.

Meanwhile, Bundy and others stayed in the Lincoln Auditorium, seated at the media desk, and refused to leave.

Just before 5:30 p.m. Tuesday, ISP troopers said they arrested three people who refused to leave the auditorium, including Bundy. The other two arrested were later identified by ISP as Aaron Von Schmidt, 42, of Coeur d’Alene, and Jill Watts, 38, of Nampa.

“Troopers were clearing the hearing room at the order of the Speaker of the House of Representatives Scott Bedke. At the time of the speaker’s order, about 18 people were inside the auditorium. All but three voluntarily left the room. The three that refused the order to leave were placed under arrest by Idaho troopers,” ISP said in a news release.

“One of the three individuals arrested, Ammon Bundy, of Emmett, refused to stand. He was placed in handcuffs and removed from the Statehouse still in the rolling chair where he was seated.”

The three arrested were booked into the Ada County Jail on the charge of misdemeanor trespassing. Bundy faces an additional charge for misdemeanor resisting and obstructing.

Additional information will be released as it becomes available, officials said.

Multiple people, including Rep. Brooke Green, D-Boise, witnessed the arrest. Bundy was rolled out of the building in an office chair.

The House Republican caucus issued a statement from Bedke later Tuesday evening addressing the disruptions at the Capitol this week.

“The events that have taken place over the past couple of days are unacceptable. It is important to protect the rights of all to participate in the process, not simply those who are the most aggressive and have the loudest voices,” Bedke said in the release.

“Unfortunately, a small group of individuals have disrupted what should be a deliberate and fair process. The end result has been chaotic and unproductive.

“All steps taken by the House of Representatives were done in an attempt to return to a normal process and create an efficient and effective Special Session, rather than wasting taxpayers time and dollars.”

Bedke said he hopes that the Legislature can continue its work this week “without further distractions.”

Earlier Tuesday, ISP cited and released a 33-year-old Boise man for trespassing. According to ISP, the man was requested by Idaho State Police troopers to leave the area. He refused. Troopers removed the man from the hearing room, and he was cited and removed from the premises.

Bundy has been a frequent face in the Statehouse this week during the Legislature’s special session. He also supported an unsuccessful effort to recall Gov. Brad Little after Little issued a stay-at-home order in March in response to the coronavirus pandemic.

Bundy and his family have been in news headlines for the past five years following their involvement in two armed standoffs, one at a family ranch in Nevada in 2014 and one at Malheur National Wildlife Refuge in eastern Oregon in 2016.