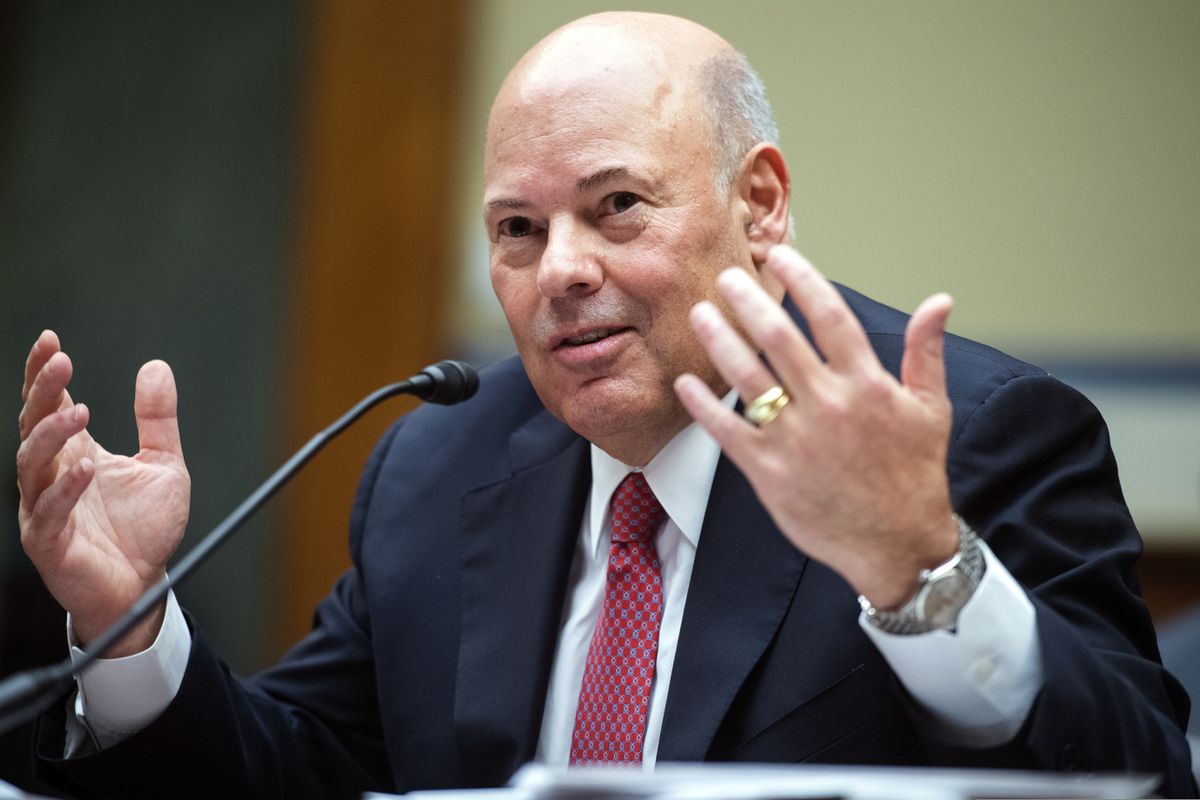 FILE - In this Aug. 24, 2020, file photo, Postmaster General Louis DeJoy testifies during a House Oversight and Reform Committee hearing on the Postal Service on Capitol Hill in Washington. (Tom Williams/Pool via AP)

FILE - In this Aug. 24, 2020, file photo, Postmaster General Louis DeJoy testifies during a House Oversight and Reform Committee hearing on the Postal Service on Capitol Hill in Washington. (Tom Williams/Pool via AP)

Patients who rely on the U.S. Postal Service for their prescription drugs may have experienced “significant” delays in their deliveries, according to a Senate report released Wednesday, which accused Postmaster General Louis DeJoy of jeopardizing the “health of millions of Americans.”

Several major U.S. pharmacies told the two Democratic senators leading the investigation - Elizabeth Warren of Massachusetts and Robert Casey Jr. of Pennsylvania - that average delivery times have ticked up since the spring, leading to a flood of angry calls from customers and costly requests to resend their medications.

Warren and Casey did not identify the pharmacies, but their report comes nearly three weeks after they asked Walgreens, CVS, and other pharmacies and benefit managers to detail the effects of DeJoy’s changes at the Postal Service. This summer, he implemented policies to reduce overtime and mail trips, which postal carriers say have led to backlogs nationwide.

Four prescription drug providers told Warren and Casey that delivery times this summer have increased by half a day or more, on average, compared with earlier this year or similar time frames in 2019, according to the Senate report, which was shared early with The Washington Post. Deliveries that might typically take two or three days were instead taking three to four, the lawmakers said, and one pharmacy in particular saw a “marked increase” in the number of shipping delays of seven or more days.

“These delays are unacceptable outcomes under any circumstances, but are made even worse by the ongoing pandemic, which has increased demand for mail-order drugs as many Americans are affected by stay-at-home orders or choose to stay at home in order to remain safe,” the senators wrote in a letter to the Postal Service’s Board of Governors.

The medicine delays, in some cases, appear to have started around May, when DeJoy had been tapped for the job but before he officially took the reins. The timeline raises the possibility that the coronavirus pandemic may have contributed to slowdowns for mailed prescription drugs, particularly as patients put new strain on the system by shifting away from in-person pickup to delivery.

“Our workforce, like many others, have been impacted by the covid-19 crisis, which has resulted in certain service disruptions,” USPS spokesman David Partenheimer said in a statement. He added they are “aggressively working to ensure full service coverage across the network,” and touted recent performance data that showed improvements in mail delivery.

But Warren and Casey still put much of the blame on DeJoy, pointing to his earlier contention that the new agency practices “should not have impacted anybody.” Investigators noted that their inquiry showed that only one of the pharmacies contacted had experienced no significant disruption during the summer - and that the provider said it did not rely extensively on USPS. The company is not named in the report, but Walgreens said in a separate statement that only an “extremely small percentage” of its prescriptions are handled by the Postal Service.

Warren and Casey urged the USPS board to take immediate action, stressing that its “failure to fix the service delays caused by Postmaster General DeJoy represent an ongoing public health threat and a dereliction of your responsibility to the American public.” Warren added in a statement that DeJoy should resign or be fired.

The Senate Democrats' findings threaten to add to the headaches already facing DeJoy, whose changes to the mail service in the name of austerity have evoked widespread suspicion and condemnation. On Monday, top House Democrats opened their own investigation, focusing on reports that DeJoy urged employees at his former business to donate to GOP candidates, then boosted their pay. Lawmakers on the House Oversight and Reform Committee have raised the possibility that DeJoy misled them under oath.

The congressional scrutiny began almost as soon as DeJoy assumed the title of postmaster general on June 15. The ally of President Donald Trump and former top Republican fundraiser set about seeking to right the budget of USPS, which has racked up $160.9 billion in debt amid declines in first-class mail delivery and the spiraling cost of retirement benefits.

But DeJoy’s initiatives, including planned service reductions and the removal of mailboxes, sparked backlash particularly among Democrats, who feared they could undermine the 2020 presidential election - particularly because Trump has openly has sought to discredit voting by mail, claiming without evidence that it will lead to rampant fraud.

DeJoy announced last month that he would suspend some of his significant changes to mail processing and delivery until after the election, but his efforts have hardly quieted his congressional critics. Democrats say they have heard an earful from constituents, many of whom have not received their deliveries on time. That includes a groundswell of patients who have had trouble obtaining their prescription drugs through USPS in the middle of a pandemic, Warren and Casey said.

T.J. Crawford, a spokesman for Aetna, said the company had not seen the lawmakers' findings but has advocated as part of a Washington coalition for emergency relief funding for USPS. Mark Mathis, a spokesman for Humana, said the company is “seeing increased small parcel shipping volumes across the U.S., impacting all delivery carriers.” And Drew Krejci, a spokesman for Optum, said they “continually monitor our shipments and make adjustments as needed.” The companies did not answer questions about the extent to which USPS’s changes may have created any problems.

Other pharmacies and benefit managers did not respond to requests for comment.

Lawmakers asked the companies to supply information about the number of customers receiving their prescriptions by mail, the average time it takes for them to be shipped and the extent to which recent Postal Service policy changes have caused new delays for customers or costs to the companies.

One company told Senate investigators that its average delivery time increased to 3.6 days in July, compared with 2.7 days last year. Another estimated that it took an average of 3.2 days for its prescriptions to be delivered in July, compared with 2.7 days over the course of 2019. A third shared that the number of prescriptions taking more than five days to arrive has “risen dramatically” since the pandemic began.

The National Association of Specialty Pharmacy, a nonprofit organization queried by lawmakers, responded that it has not experienced widespread disruption because its members rely on special services, such as refrigeration, that USPS does not provide. But Julie Allen, a top lawyer for the group, said in an interview that it heard scattered reports about delays, particularly affecting patients in need of weekend delivery or those in rural areas.

“We have a couple anecdotal events for members that noticed a slowdown particularly the period between March and July,” Allen said, adding that it was impossible to tell whether the difficulties, some of which predate DeJoy, are the result of the pandemic or postal changes.

The delays still threaten to put seniors, veterans and other Americans at risk of missing much-needed medication, Democratic lawmakers said. They also created headaches for pharmacies, including one that told Senate leaders that it received a fourfold increase in customer calls and inquiries about missing mail-order drugs between May and August. Another said it had an 80% spike in drug reshipments in July, totaling about $700,000 in costs, the report found.

In response, Warren and Casey sent a separate letter to the watchdog board that oversees the USPS, urging it to “take quick action to reverse these lapses in service.”

“As members of the Postal Service Board of Governors, you have both the responsibility and authority to fix this growing problem.”