‘Sad, tragic loss for all Californians’: Death toll in state’s wildfires at 20 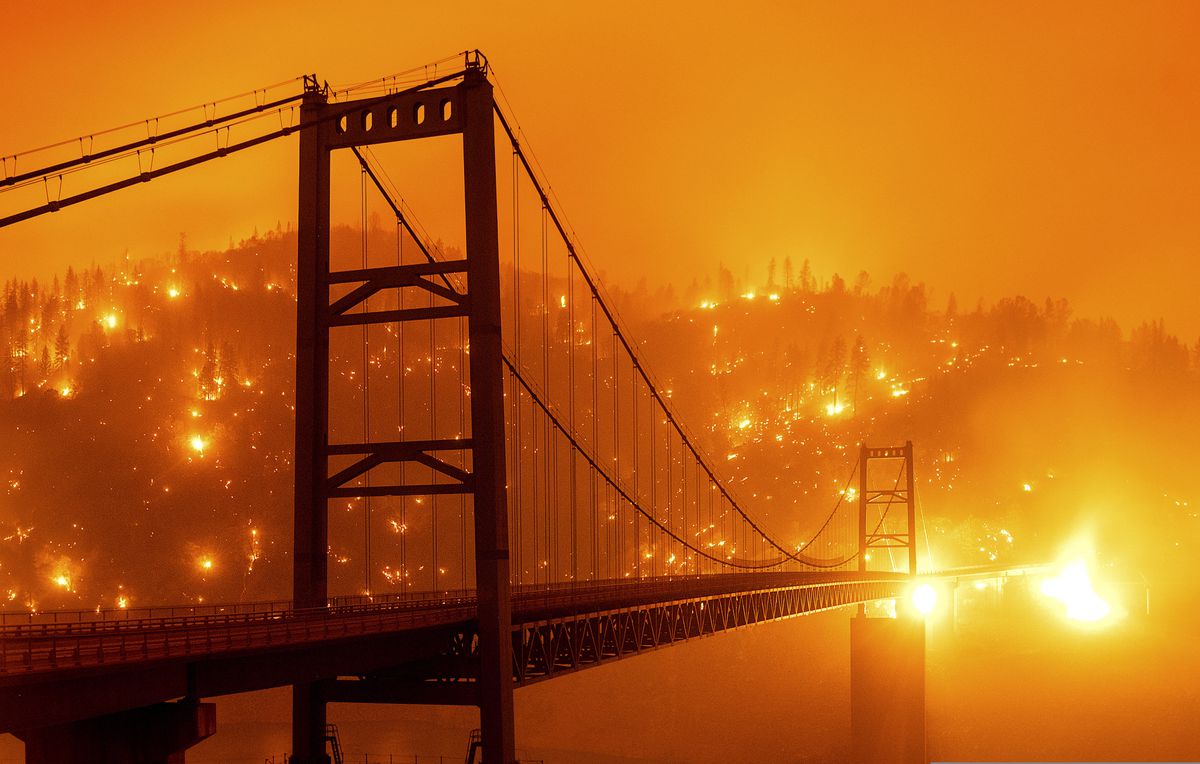 In this image taken with a slow shutter speed, embers light up a hillside behind the Bidwell Bar Bridge as the Bear Fire burns in Oroville, Calif., on Wednesday, Sept. 9, 2020. (AP Photo/Noah Berger)

In this image taken with a slow shutter speed, embers light up a hillside behind the Bidwell Bar Bridge as the Bear Fire burns in Oroville, Calif., on Wednesday, Sept. 9, 2020. (AP Photo/Noah Berger)

A record-shattering rash of wildfires is continuing to take a devastating and deadly toll on California, even as crews report some progress in their battle against the largest firestorm in modern state history.

The collective scale of the infernos that have scarred the state over the last month is staggering: at least 20 fatalities, tens of thousands of structures destroyed and more than 3.1 million acres burned — the most recorded in a single year.

The loss has been most profound from the North Complex fire near Oroville in Butte County, which is now blamed for 10 deaths, placing it among the deadliest wildfires in state history, according to the California Department of Forestry and Fire Protection, or Cal Fire.

Among those killed was 16-year-old Josiah Williams.

An additional 16 people have been reported missing in the area of the fire, which has burned more than 252,000 acres and was 23% contained as of Friday morning.

Steve Kaufmann, a spokesman for the fire’s response team, said Thursday that 2,000 structures have been destroyed or damaged, though that number may increase after crews further assess the area.

A second death was confirmed Thursday near the community of Happy Camp in the burn area of the Slater fire, which has chewed through more than 136,000 acres in Siskiyou and Del Norte counties and across the border into Oregon. That blaze remains 0% contained.

“In total, there have been 20 fatalities on this series of fires that have been burning since Aug. 15,” said Cal Fire spokesman Daniel Berlant, calling the toll “a very, very sad and tragic loss for all Californians.”

Officials also saw further growth in the monstrous August Complex fire, already the largest in state history. That blaze has now scorched more than 491,000 acres in a remote area in and around Tehama County.

Abutting it to the north is the Elkhorn fire, burning in the Mendocino, Shasta-Trinity and Six Rivers national forests. It has charred 255,309 acres.

For a time, online reports had combined the Elkhorn fire statistics with the August Complex fire umbrella — resulting in a mammoth merger listed at more than 746,000 acres.

But Kimberly Kaschalk, a public information officer for the August Complex response, said Friday morning that the combination was more a reflection of the unified command structure set up to manage all the blazes in the area, rather than an indication that the fires had physically combined.

“I’m sure a lot of people are spitting out their coffee this morning when they see that,” she said.

The online August Complex acreage figures were revised downward later in the morning.

The scope of this year’s fire season has been both historic and horrifying. Six of the state’s 20 largest wildfires have started in the past month or so, according to Cal Fire.

Within the last week, front-line firefighters have had to contend with a record-breaking heat wave and howling winds — a noxious combination that fueled explosive fire growth statewide.

Many officials and experts believe such extreme weather conditions are the result of climate change.

“If you do not believe in science, I hope you believe in observed evidence,” Gov. Gavin Newsom said Friday as he surveyed damage in the Oroville area.

“You walk around this community, you walk around this park around Lake Oroville, you see the reality — a reality that has set in in this state in very indelible ways. And that is, we’re in the midst of a climate emergency. We’re in the midst of a climate crisis. We are experiencing weather conditions the likes of which we’ve never experienced in our lifetime. We’re experiencing what so many people predicted decades and decades ago, but all of that, now, is reality.”

“This is a climate damn emergency,” he said. “This is real, and it’s happening.”

Despite the challenges, California fire officials say they have continued to gain ground amid weather conditions that are currently improving.

“The smoke layer covering much (of) Northern California will help maintain cooler temperatures into the weekend, and an onshore (air) flow next week will help increase humidity,” Cal Fire officials wrote in a situation report Friday. “In Southern California, desert regions will remain dry and warm, with the mountains and coastal regions experiencing an onshore flow that is helping with humidity recovery and seasonal temperatures.”

Though the near-term forecast is promising, officials warned that fire season is far from over. Roughly 14,800 firefighters are still battling 28 major wildfires burning statewide, according to Cal Fire.

“Don’t let these cooler temperatures fool you. Do not let your guard down,” Berlant said Friday. “Historically, it is September and October when we experience our largest and our most damaging wildfires.”

There are signs of progress in some areas.

The El Dorado fire near Yucaipa has burned almost 14,000 acres and was 31% contained as of Friday morning. In San Diego County, the Valley fire near the Mexican border remains at 17,665 acres and is 39% contained, according to Cal Fire.

All evacuation orders, evacuation warnings and road closures in the area of the Valley fire were lifted Friday afternoon. For the El Dorado fire, Yucaipa police also lifted the evacuation orders for all areas east of Jefferson Street and south of Carter Street.

Officials are also now reporting 6% containment on the Creek fire, which has burned almost 176,000 acres and destroyed an estimated 369 structures in the Sierra foothills northeast of Fresno.

The Bobcat fire burning in the San Gabriel Mountains above Monrovia is also now 6% contained. It has charred more than 26,000 acres.

Smoke from that fire again blanketed parts of Los Angeles County on Friday, prompting air quality advisories for much of the region. Areas along the 210 Freeway from Pasadena to Rancho Cucamonga are likely to see the highest levels of particulate matter, according to the South Coast Air Quality Management District.

“Even in areas far from fires or areas not covered by a smoke advisory, if you can smell smoke or see ash from a wildfire, avoid or limit outdoor activities,” the district said.

In the San Francisco Bay Area, which has been socked in with smoke this week, local police departments sent alerts to residents about hazardous air quality.

San Francisco opened relief centers for homeless people Friday and urged everyone else to stay inside with windows and doors shut. Air quality throughout much of the region was at “very unhealthy” levels Friday.

Mary Ellen Carroll, executive director of San Francisco’s Department of Emergency Services, said during an online news conference that older people, those with respiratory illnesses and children were especially at risk.

She urged residents not to use leaf blowers, barbecues or hair spray, to avoid indoor painting and to use exhaust fans while cooking.

“We are asking people to stay indoors with windows and doors closed,” she said.