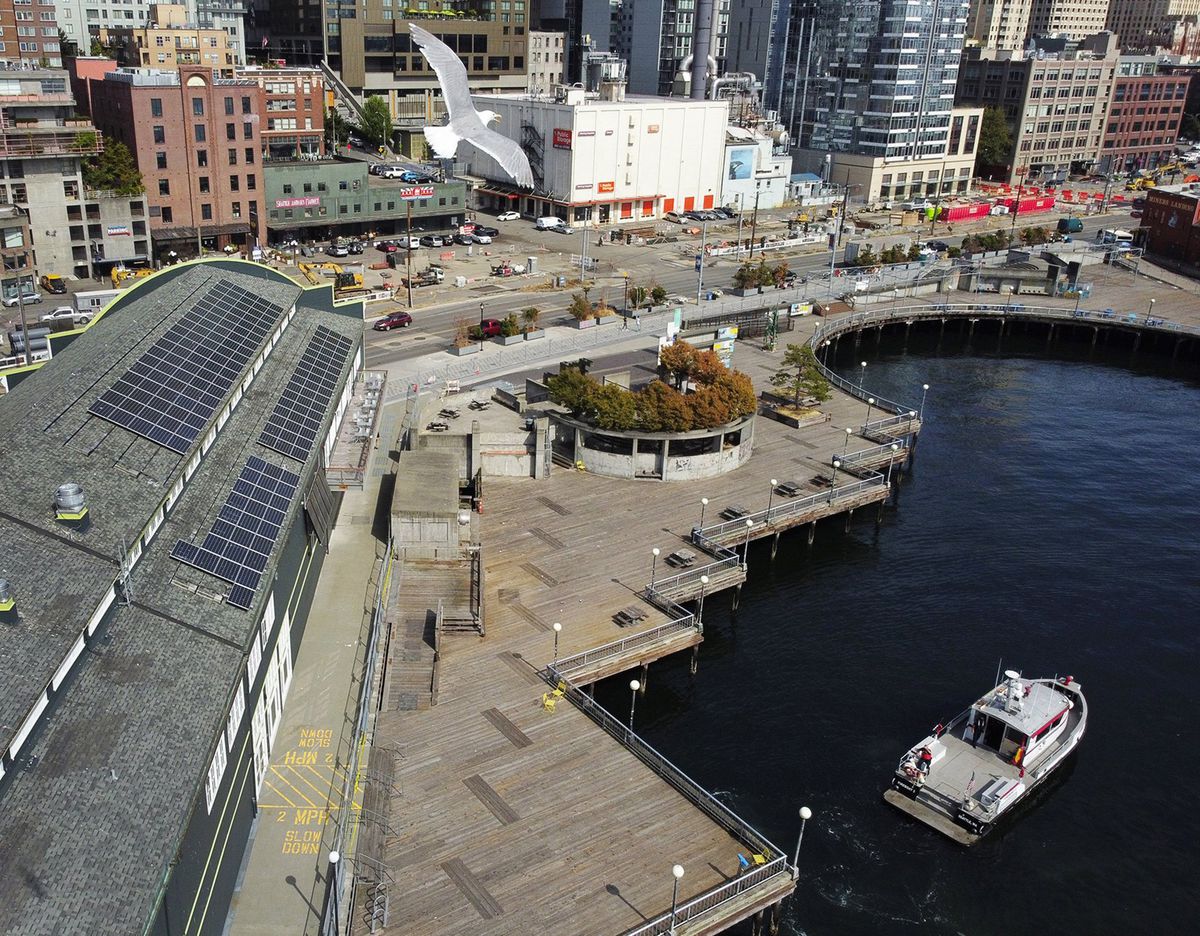 Seattle's old Waterfront Park on August 11, 2020, after the city closed it the previous week upon discovering Pier 58 had shifted, leaving a gap between the pier and the land. It partially collapsed on Sunday, Sept. 13, 2020. The Seattle Aquarium is on the left.(Ken Lambert/Seattle Times/TNS)

Seattle's old Waterfront Park on August 11, 2020, after the city closed it the previous week upon discovering Pier 58 had shifted, leaving a gap between the pier and the land. It partially collapsed on Sunday, Sept. 13, 2020. The Seattle Aquarium is on the left.(Ken Lambert/Seattle Times/TNS)

As demolition crews worked to cut away heavy concrete planters that surrounded a bronze fountain, alarms rang out at about 4 p.m. The seven workers scrambled to evacuate as a 15,000-square-foot chunk of the pier, adjacent to the Seattle Aquarium, plunged into Elliott Bay, sending two men into the water.

The men, 30 and 42, were quickly rescued from the water by the contractor’s on-site safety staff — one on a barge on-site for the work, and another on the shore side — then treated on the scene by the Seattle Fire Department. They were transported to Harborview Medical Center, where one was discharged and the other was in satisfactory condition, said spokeswoman Susan Gregg. No other injuries were reported.

“We knew that the pier was shifting and that there was a risk of collapse, and so a series of additional safety precautions were taken,” said Marshall Foster, director of the city of Seattle’s Office of the Waterfront and Civic Projects, which is overseeing a $720 million renovation of the entire length of the waterfront as part of the Alaskan Way Viaduct replacement.

Foster said Sunday evening that initial inspections revealed no damage to the aquarium, nor to the Miner’s Landing pier to the south, which holds the Great Wheel. The Seattle seawall also appeared to be undamaged, he said, but the sidewalk along Pier 58 would remain closed “for the foreseeable future,” he said.

The city knew that Waterfront Park, built in 1974, was failing. A 4-ton bronze fountain — the final sculpture of Seattle artist and architect James FitzGerald, cast a year after his death from bone cancer by his spouse and collaborator, Margaret Tomkins, according to HistoryLink.org — sat atop an elevated concrete platform surrounded by the heavy planters. The load was supported by steel pilings, but over time the fountain structure and the pilings separated, creating a heavy, unsupported weight, Foster said.

City officials had planned to remove and replace Waterfront Park in 2022, as part of the broader waterfront project. But in early August, they discovered that it had moved several inches away from the land. The park was cordoned off from the public and the city began an emergency demolition project.

Going into the weekend, monitoring systems detected that the failure was worsening. The city’s contractor on the project, Orion Marine Contractors, “accelerated removing portions of the site in order to try to delay the collapse,” Foster said.

A representative of Orion Marine Contractors, which is based in Texas and has an office in Tacoma, did not return a request for comment Sunday.

Demolition will continue, but the methods will likely need to change, Foster said. Between a fifth and a quarter of the pier fell into the water, including the fountain, and will need to be removed, adding to the complexity of the project, he said. The project was initially estimated to cost $4.3 million — with funding already budgeted as part of the waterfront program — and last through early 2021.

Removing the pier requires pulling out the piles that support it, along with the park’s timber and concrete deck. Plans to rebuild the pier include a new lawn and trees, as well as features to improve salmon habitat.

“It’s as important as ever, if not more, to remove the remainder of the pier now that this has happened,” Foster said.

He said there was similar structural deterioration on Pier 62 and 63, but construction to repair those areas has been completed and the piers have been stabilized. He said he is not aware of stability issues at any other publicly owned piers that have public access.

Seattle Mayor Jenny Durkan tweeted that she was grateful to the first responders who arrived on scene and helped the injured workers.

“This year continues to present immense and unprecedented challenges for us as a city,” Durkan tweeted. “In the coming days, we will evaluate Pier 58 to determine appropriate next steps and potential broader impacts.”