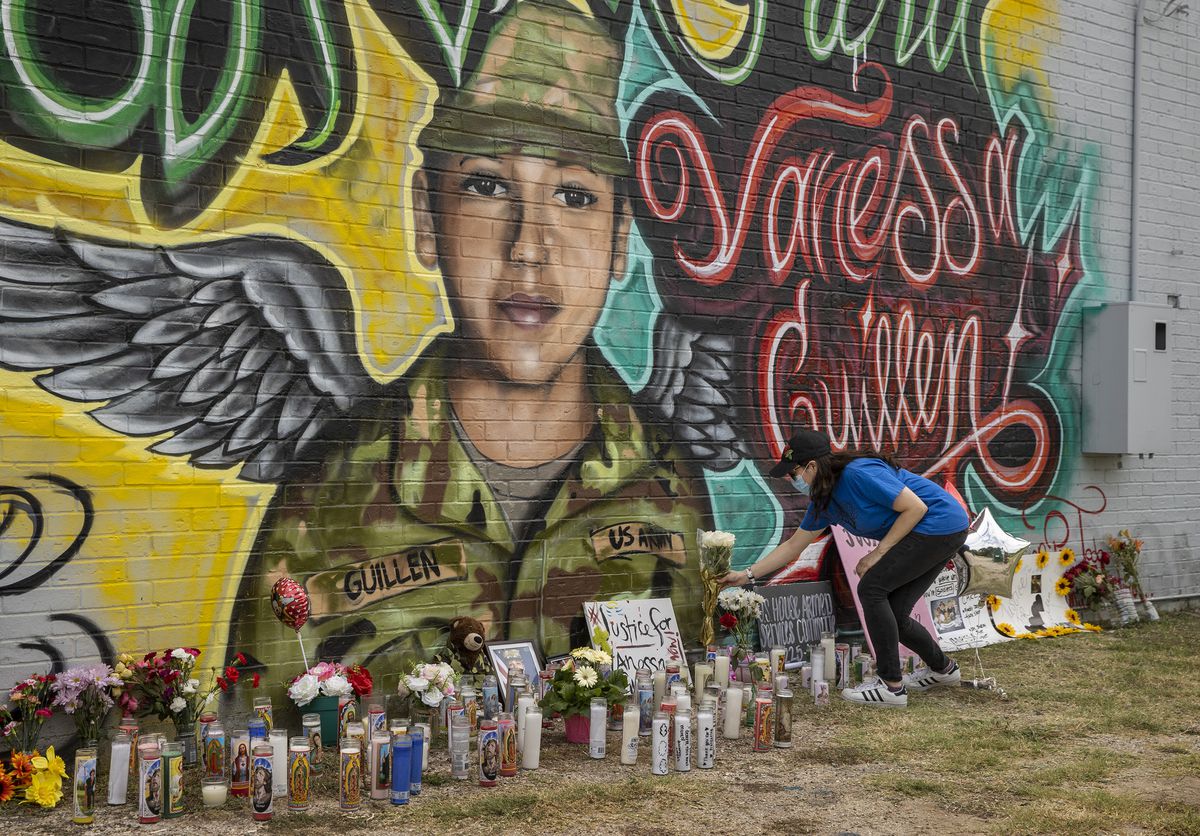 Mellisa Mendoza places white roses at a mural for Army Spc. Vanessa Guillen in Austin, Texas, on Monday July 6, 2020. Guillen went missing from Fort Hood in April, and is believed to have been killed by another soldier. The mural was created Saturday and Sunday by artists Fili Mendieta and Arturo Silva. (Jay Janner/Austin American-Statesman via AP)

Mellisa Mendoza places white roses at a mural for Army Spc. Vanessa Guillen in Austin, Texas, on Monday July 6, 2020. Guillen went missing from Fort Hood in April, and is believed to have been killed by another soldier. The mural was created Saturday and Sunday by artists Fili Mendieta and Arturo Silva. (Jay Janner/Austin American-Statesman via AP)

WASHINGTON — Lawmakers on Wednesday introduced legislation that would transform the way the military handles sexual assault and harassment allegations, after a soldier told her family she was being harassed and was killed by a fellow soldier.

The proposed changes, named in honor of Army Spc. Vanessa Guillén, would include the creation of chief prosecutor offices within the military branches that would investigate sexual misconduct accusations and make recommendations for prosecution. Allegations are currently handled by commanders within units that often include both victim and perpetrator, which critics say creates a lack of trust and a culture of retaliation, and pressures victims not to report abuses.

“The status quo is unacceptable. We’re not going to tolerate it anymore,” Rep. Jackie Speier, D-Calif., a member of the House Armed Services Committee, said in a news conference at the U.S. Capitol. Speier and Rep. Markwayne Mullin, R-Okla., introduced the bill, alongside several other lawmakers, the Guillén family and the family’s attorney, Natalie Khawam, who helped shepherd the bill.

Guillén’s family says she confided in them that she was sexually harassed before she disappeared on April 22 from Fort Hood in Texas and that she did not think she could not tell her superiors.

A suspect in the case, a fellow soldier, fatally shot himself when police closed in after investigators discovered her remains on June 30, more than two months after her disappearance.

Guillén’s death has become emblematic of harassment and sexual assault in the military, fueling calls for systemic changes to how allegations are handled. The bill, named the I Am Vanessa Guillén Act, references a grass-roots social media effort in which service members and veterans have shared their own harrowing stories of abuse.

“It’s not fair that this had to happen to Vanessa for everyone to pay attention,” Mayra Guillén, Vanessa’s sister, said at the news conference. “She is now an American hero that will save lots of lives.”

The bill would also create a confidential reporting system for harassment similar to a system in place for sexual assault allegations and categorize sexual harassment as a distinct crime under military law. It would also allow service members to file for damages if their case was negligently handled or an assault led to injury or death.

The Pentagon did not return a request for comment on the proposed bill, which has more than 90 cosponsors.

Don Christensen, a former Air Force chief prosecutor, welcomed the bill, saying he has advocated for similar changes on behalf of Protect Our Defenders, a nonprofit group focused on sexual harassment and assault in the military.

Taking the decision to recommend a court-martial away from commanders is more in line with the civilian world, where there are attempts to avoid conflicts of interest, he said.

Commanders often issue administrative punishments such as loss of rank or pay for substantiated harassment, which other troops may view leniency on perpetrators. A court-martial, however, allows harsher penalties, including jail time or removal from the military.

“One of the big problems is there is a lack of trust from people that keeps them from reporting,” he said. “If people don’t come forward, you can never root the problem out.”

Sexual harassment is prohibited under various provisions of the Uniform Code of Military Justice, said Rachel VanLandingham, a former Air Force attorney and professor at the Southwestern Law School in Los Angeles. But making it a stand-alone offense, she said, “would clearly emphasize the military’s intolerance of such conduct — it would send an important signal regarding what type of conduct isn’t tolerated in the military.”

VanLandingham took issue with other parts of the bill, including taking prosecutorial discretion away from commanders only in cases of sexual assault and harassment.

“If the purported conflict of interest exists for sexual offenses, it exists for all other crimes as well,” she said. “The root of the issue is if commanders should have prosecutorial discretion at all.”

A provision for damages would also create a “caste system,” she said, in which sexual assault survivors might be compensated but not other assault victims.

In response to the Guillén slaying and other high profile deaths at Fort Hood, the Army removed the post’s commander, Maj. Gen. Scott Efflandt, in early September, blocking his move to head the 1st Armored Division. That level of command is vital for a general’s continued career.

The Army also appointed Gen. John Murray, the head of Army Futures Command and one of the most senior Army leaders, to broaden the investigation into Guillén’s chain of command.

Five suspected homicides of Fort Hood soldiers were reported between March and June, more than in last four years combined. Fort Hood for years has recorded the highest numbers of violent and nonviolent crimes Army-wide.