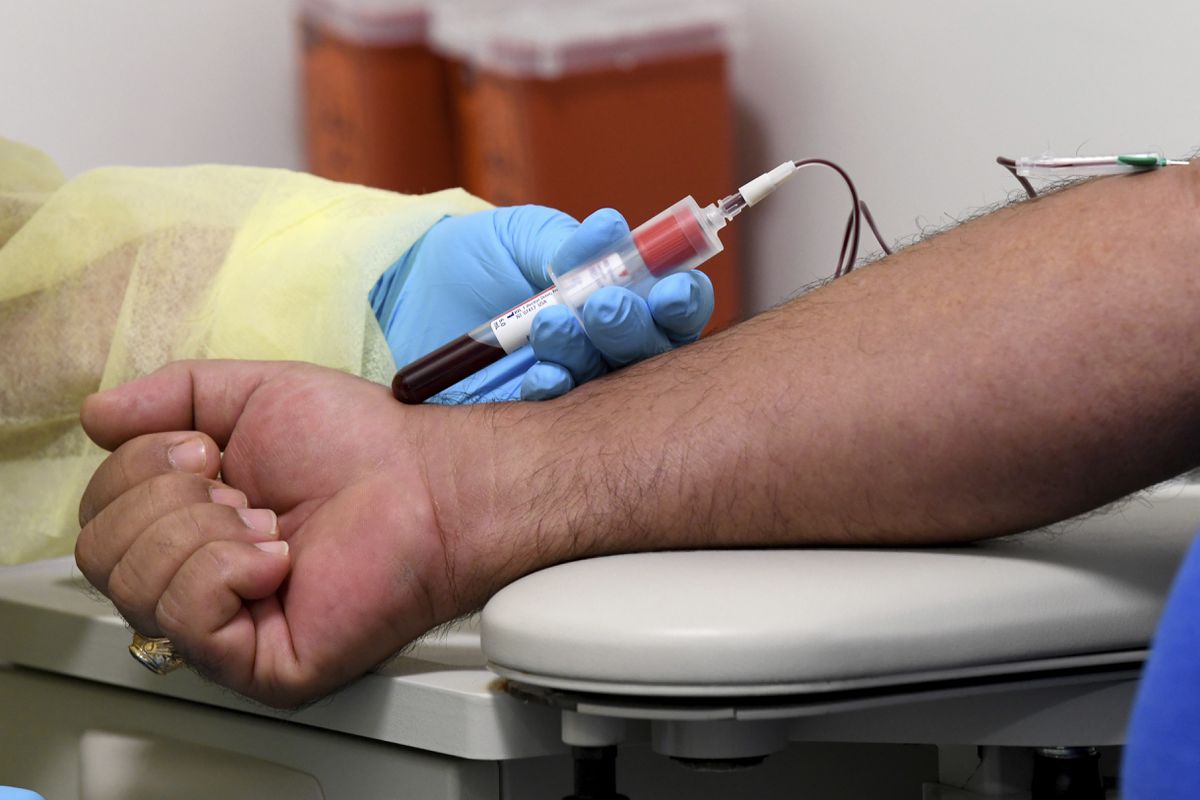 WASHINGTON - The Food and Drug Administration is expected tighten a standard for an emergency authorization of a coronavirus vaccine as soon as this week that will make it exceedingly difficult for any vaccine to be cleared before Election Day.

The agency is issuing the guidance to boost transparency and public trust as it approaches the decision of whether a prospective vaccine is safe and effective. Public health experts are increasingly worried that President Donald Trump’s repeated predictions of a coronavirus vaccine by Nov. 3, coupled with the administration’s pressure on federal science agencies, may prompt Americans to reject any vaccine as rushed and potentially tainted.

Polls show that the politicization of the race to develop a vaccine is taking its toll. Pew Research Center recently reported that the percentage of people who said they would get the vaccine if it were available today has dropped to just over 50%; it was 72% in May.

The guidance, which is more rigorous than what was used for emergency clearance of hydroxychloroquine or convalescent plasma, is an effort to shore up confidence in an agency that made missteps in its handling of those clearances.

In the case of vaccines, the FDA is expected to ask manufacturers seeking an emergency authorization - a quicker process than a formal approval - to follow participants in late-stage clinical trials for a median of at least two months, starting after they receive a second vaccine shot, according to two individuals familiar with the situation who spoke on the condition of anonymity to discuss information before it is made public.

The agency also is looking for at least five severe cases of covid-19, the illness caused by the novel coronavirus, in the placebo group for each trial, as well as some cases of the disease in older people, as a sign the vaccine works. These standards, plus the time it will take companies to prepare their applications and the agency to review the data, make it improbable for any vaccine to be authorized before the election. The agency has said any vaccine would have to be 50% more effective than a placebo.

“It’s hard to imagine how an EUA could possibly occur before December,” said Paul Offit, director of the Vaccine Education Center at Children’s Hospital of Philadelphia and a member of the FDA’s advisory board on vaccines.

Moderna and Pfizer began their trials July 27 and took about a month to enroll 15,000 people, the halfway point for their planned enrollment of 30,000 people. The trials are designed for people to receive their second shot either three or four weeks later. Two months of follow-up would make it unlikely that companies would have enough data before mid-November.

The guidance is one way of trying to shore up confidence in the agency. FDA allies, intent on building trust, are also spotlighting agency career scientists, noting that the one overseeing the vaccine-approval process has threatened to quit if he is pressured to greenlight a vaccine before he is convinced it is safe and effective.

But, administration critics note, such efforts are undercut on an almost daily basis by overly rosy and contradictory comments by Trump and continued revelations about administration actions to strong-arm government scientists and regulators, and curb their independence.

In addition, the FDA guidance is unlikely to satisfy some critics, who say the agency should not use an emergency authorization for a vaccine.

“Things are so revved up right now that there is quite a possibility that the American public won’t accept a vaccine because of all the things that are going on,” said Peter Hotez, dean of the National School of Tropical Medicine at Baylor College of Medicine. “U.S. history is littered with good vaccines that get voted off the island because of bad public perceptions.”

Last week, concerns about the FDA’s autonomy deepened after Alex Azar, the secretary of health and human services, revoked its authority and that of other HHS agencies to sign new regulations, reserving that power for himself. In a statement issued late Sunday, HHS said the change “minimizes litigation risk . . . prevents potential future abuse of authority, and is consistent with congressional intent.” It said the move, made after a department review of rulemaking procedures, will not affect the FDA’s work on vaccines and covid-19 treatments.

Several FDA experts criticized the timing in the fraught run-up to a vaccine-approval decision. “Why take this health decision-making away from public health agencies like FDA at this particular moment?” said Patricia Zettler, an Ohio State University law professor and former associate chief counsel at the FDA.

Public confidence also has been eroded by efforts by a former top HHS political appointee and his adviser to silence a top official at the Centers for Disease Control and Prevention who stressed the seriousness of the novel coronavirus and to change and delay the CDC’s regular scientific missives, the Morbidity and Mortality Weekly Reports, if they deviated from the president’s upbeat message. Concerns about the CDC were ratcheted up in recent days when the agency posted, then removed, language from its website that said the coronavirus spreads via airborne transmission, the latest example of it backtracking on its own guidance. The agency said the guidance was an early draft that was posted by mistake.

FDA officials have indicated that if the vaccine data on safety and efficacy are strong, it will consider issuing an emergency use authorization - a temporary approval that can be granted more quickly and with less documentation than a full approval, which could take six to nine months. The only other time the FDA has authorized a vaccine on an emergency basis was in 2005, when it cleared the anthrax vaccine for military personnel considered at high risk of an attack.

Pfizer has said it may have data for the FDA to review by late October if things go well, though that timetable might slip with the new guidance. Moderna has said it is unlikely to have data in October. AstraZeneca’s trial in the United States is halted while investigators try to determine whether a serious neurological problem in one participant in Britain was caused by the vaccine.

The FDA, in the new vaccine guidance, is expected to say it will require data for an emergency authorization that is close to that required for a full approval, according to recent comments by officials. That’s a higher bar than is typical for an emergency authorization, which requires only that a product “may be effective” and that likely benefits outweigh harms. The tougher standard is appropriate, officials have said, because a vaccine is given to healthy people, not to those who are ill.

The agency has acknowledged that emergency authorization would be based on less safety data than would be the case for a regular approval. For that reason, it has said it will require clinical trial participants to be followed for a significant length of time in case they develop problems later.

The FDA’s use of emergency authorizations is shadowed by what critics describe as the botched hydroxychloroquine and plasma episodes. In March, the agency authorized the use of the anti-malarial drug touted by Trump as a treatment for covid-19 on scant evidence. It later withdrew the authorization when studies showed that the drug did not help covid-19 patients and posed safety risks for some.

On Aug. 23, FDA Commissioner Stephen Hahn exaggerated the benefits of convalescent plasma at a briefing with Trump and Azar. He subsequently apologized, but Holly Fernandez Lynch, a bioethicist at the University of Pennsylvania, said the question remains: “Is the president going to put the screws to the FDA so much that they will speed ahead on a vaccine?”

Rachel Sachs, a law professor at Washington University in St. Louis, noted that Azar, who has the legal authority to approve drugs, could overrule the FDA if it rejected a vaccine. She said such a move was unlikely and would guarantee that many people would refuse to be vaccinated.

Brian Harrison, Azar’s chief of staff, said the idea that the secretary would approve a vaccine over FDA objections was “preposterous and betrays ignorance of the transparent process” the administration is following to develop and review vaccines.

Because of the political environment, the FDA will need the support of respected health leaders and scientists from inside and outside the government for a vaccine decision to be accepted by the public, said Daniel Carpenter, a Harvard University professor of government. Experts such as Anthony Fauci, director of the National Institute of Allergy and Infectious Diseases, could influence public opinion with his endorsement, he said.

“The four of us feel this is the time for us to step forward,” Califf said. “We don’t speak jointly often, but when we do, it signals an important issue that deserves attention.”

Ellen Sigal, founder and chairwoman of Friends of Cancer Research, which works closely with the FDA, said the career staffers “are the very people that we should trust to make these decisions.” Hahn recently said on Twitter that he has “unwavering confidence” in the FDA professional staff.

The FDA career staff itself is trying to reassure the public. In a highly unusual move, Peter Marks, the head of the center that oversees vaccine regulation, and seven other senior career officials vowed in an opinion article to maintain “independence to ensure the best possible outcomes for public health.”

The agency also has pledged to take any vaccine data to its panel of outside advisers, called the Vaccine and Related Biological Products Advisory Committee, before making decisions. The agency has scheduled a public meeting of the panel for Oct. 22 and said other sessions can be held as needed, depending on when data is available.

But some FDA watchers say that those steps are not enough and that the agency should forswear use of an emergency authorization for a vaccine and instead require a full approval.

“If we don’t get this right, we’ll see a deep corrosion of trust over the long term - and that will be the darkest legacy for a post-covid world,” said Lawrence Gostin, a public health expert at Georgetown University’s law school.

Eric Topol, founder and director of Scripps Research Translational Institute, opposes using an emergency authorization in the next several weeks or months. “We are not in a high-trust mode, and the last thing you want to do is take a short cut and put everything at risk,” he said. He said the agency should not consider such an authorization until at least early next year to ensure that it has adequate safety data.

Others say the authorization option must be kept on the table at a time when thousands of people a week are dying from the virus. They note that the vaccine probably will be authorized initially only for select groups, such as health-care workers and the elderly, while more data is gathered.

“If there is definitive evidence of efficacy and no significant signal of toxicity or lack of safety, withholding authorization would be an equal sin on the other side,” said Califf.