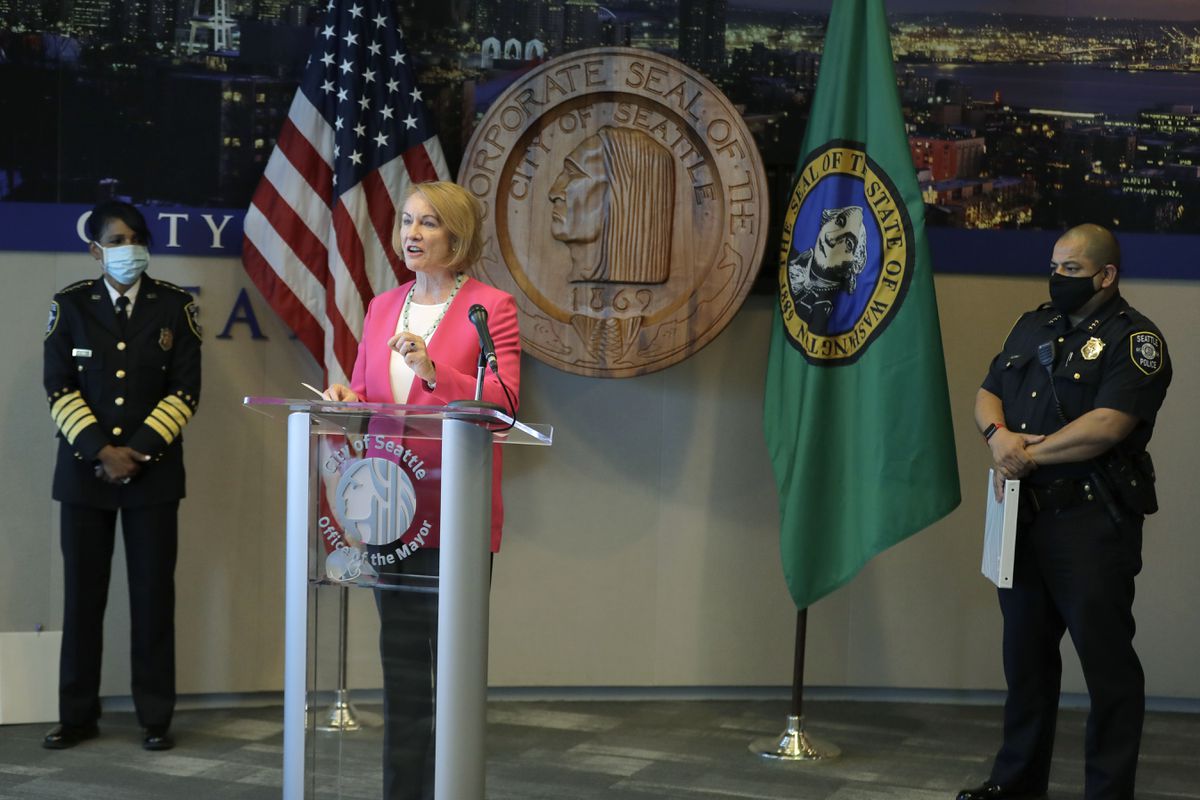 Seattle Mayor Jenny Durkan, center, speaks as Seattle Police Chief Carmen Best, left, and Deputy Police Chief Adrian Diaz, right, look on during a news conference, Tuesday, Aug. 11, 2020, in Seattle. Best, the first Black woman to lead Seattle's police department, announced she will be stepping down in September following cuts to her budget that would reduce the department by as many as 100 officers and that Diaz will serve as interim police chief. (AP Photo/Ted S. Warren)

Seattle Mayor Jenny Durkan, center, speaks as Seattle Police Chief Carmen Best, left, and Deputy Police Chief Adrian Diaz, right, look on during a news conference, Tuesday, Aug. 11, 2020, in Seattle. Best, the first Black woman to lead Seattle's police department, announced she will be stepping down in September following cuts to her budget that would reduce the department by as many as 100 officers and that Diaz will serve as interim police chief. (AP Photo/Ted S. Warren)

SEATTLE — The City Council voted Tuesday to override Mayor Jenny Durkan’s vetoes of council bills meant to start shrinking the police force and scaling up community solutions this year. Council members chose to stick with the 2020 budget bills instead of a substitute proposal that the mayor had said she could accept.

The veto-override votes on the three bills were preceded by more than an hour of public comments, with most speakers urging council members to “hold the line” against the mayor and demonstrate they were listening to the Black Lives Matter movement. Several council members then sharply defended the bills as reasonable first steps toward revamping public safety in Seattle.

Councilmembers Alex Pedersen and Debora Juarez dissented on one of three veto overrides; the other two overrides were unanimous.

“Countless videos of Black and brown lives lost here in Seattle and across the country shows us that not everyone feels safe in our community and not everyone is safe,” Council President M. Lorena Gonzalez said, referring to people killed by police officers. “We need public safety that’s centered on harm reduction, not the status quo.”

She added, “When I look back in this moment of time, I want to be able to tell my daughter, who I’m currently holding in my arms, that I did the right thing and that I voted on the right side of history.”

Councilmember Dan Strauss described the changes advanced by the council, including provisions cutting up to 100 police officers, as “too important to stop and play political games.” Councilmember Tammy Morales read aloud the names of people killed by Seattle police in recent years. She described the council’s bills as building on work by community organizers.

Durkan and council members have clashed for months over how to rework a 2020 city budget ravaged by the COVID-19 crisis, and how to respond to the uprising for Black lives that erupted after Minneapolis police killed George Floyd.

Some council members, heeding calls from protesters and community coalitions, pressed to defund the Police Department and invest in approaches less likely to result in harm. The mayor, hearing from business groups, the Seattle Police Officers Guild and residents skeptical of such changes, called for the council to slow down. Police Chief Carmen Best abruptly retired earlier this month rather than carry out layoffs.

Tuesday’s decision at a special remote meeting was partly about how the city spends money the rest of this year. But the decision also was about who’s in the driver’s seat at City Hall, with another round of deliberations starting soon. Seattle’s 2021 budget could determine how the city handles public safety in the long term, and Durkan is scheduled to unveil her plan next week.

Durkan came under fire this summer for the Police Department’s use of tear gas, blast balls and other heavy-handed crowd control tactics, and she’s been battling a recall attempt in court. Sawant is meanwhile also facing a recall attempt, partly for letting protesters into City Hall during a pandemic.

Leading into Tuesday’s meeting, council members were taking heat from constituents on both sides. The Seattle chapter of the Democratic Socialists of America organized a rally at a park near Councilmember Andrew Lewis' Queen Anne apartment building, hoping a 11th-hour push would convince him to oppose Durkan. A group called Move Seattle Forward, associated with the Downtown Seattle Association, thanked supporters for sending 1,000 pro-veto emails to council members last week.

The budget bills passed by the council and vetoed by Durkan last month included actions meant to reduce the police force through layoffs and attrition; cut the wages of police commanders; dismantle the Navigation Team that clears certain homeless encampments; borrow $14 million to fund community-based public-safety programs; and use $3 million in emergency reserves to fund a community-led public-safety research project.

Though the cuts were expected to immediately slice only about $3 million from the Police Department’s $400-plus million annual budget – nowhere close to the 50% that seven council members in July vowed to extract, the council members described the trims as a crucial “downpayment” on more sweeping changes to come. They asked the Durkan administration to seek an exception allowing the officer layoffs to occur based on misconduct rather than seniority.)

“Today, we are encouraged to see the City Council, emboldened by the support of tens of thousands of BIPOC (Black, Indigenous and People of Color) community members, resist Mayor Durkan’s bullying tactics and anti-Black obstructionism,” Decriminalize Seattle and King County Equity Now said in a statement, referring the council’s Police Department cuts as modest.

“As we head into the 2021 budget cycle, we expect council members to maintain their conviction, elevate Black lives, and uphold their public commitments to divest from policing and reinvest in Black communities,” the community coalitions added.

Durkan warned the council’s layoffs could result in new recruits, including young officers of color, being let go. She objected to shutting down the Navigation Team and opposed using a loan for the public-safety programs.

“The council needs to listen to constituents from across the city, not just those who choose to gather outside their front doors,” the association said.

In a statement before Tuesday’s overrides, the mayor attributed her concerns to inadequate plans from the council for responding to 911 calls with a smaller police force, dealing with homeless encampments with the Navigation Team and repaying the loan. There likely isn’t enough time remaining in 2020 to carry out the layoffs.

“While council may not be concerned about the details, I am. And they actually do matter,” Durkan said.

On Monday, Gonzalez called Tuesday’s meeting to address the vetoes and said she would personally vote to override them. Anticipating some of her colleagues might side with the mayor, she unveiled a potential substitute. While the council allocates city funds, the mayor can choose to spend those funds or not, she noted.

Gonzalez described the substitute proposal Monday as a possible compromise negotiated with Durkan, while Decriminalize Seattle and King County Equity Now said it would amount to capitulation. The council president said Tuesday the proposal was merely a “back-up plan,” needed in case the mayor’s vetoes were sustained.

Several council members Tuesday said they were theoretically open to a deal with Durkan but thought the substitute proposal conceded too much. They said they hoped to work better with the mayor on next year’s budget.

“One of our shared responsibilities is to find common ground,” said Durkan, vowing to include $100 million in housing, education and other investments for communities of color in her 2021 budget plan next week and promising to improve homeless encampment outreach.

“Even when we disagree, I have always believed we could work together on actual solutions that can be done and make the change we want to see.”

The mayor and council already have agreed that certain functions, such as the city’s 911 call center and its parking enforcement unit, should be moved outside the Police Department.