4 takeaways from the vice presidential debate 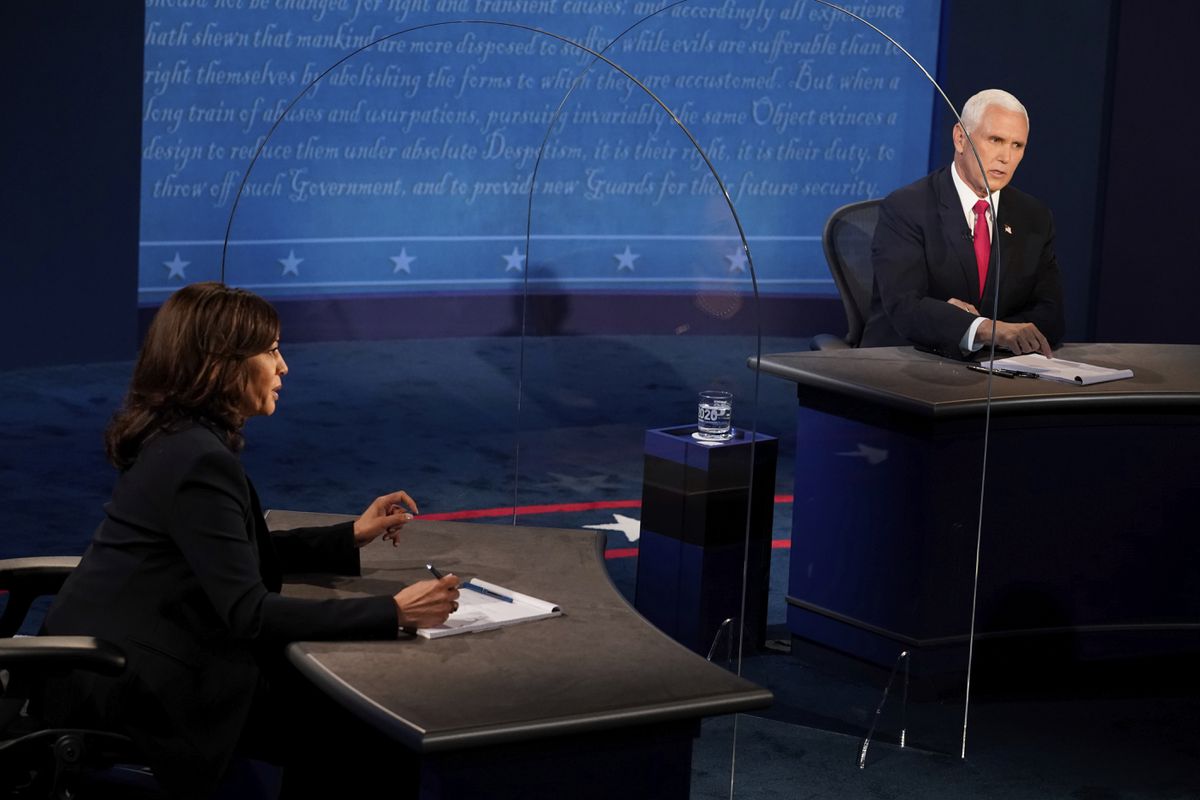 Below, some key takeaways.

From the start of the debate, coronavirus was front-and-center - particularly given Pence’s role as head of the White House coronavirus task force. It quickly became clear that Pence was much more interested in propping up and knocking down straw men than in delving into details of the administration’s response.

Early on, he accused Biden of calling Trump’s travel ban “hysteria” and “xenophobia.” In fact, Biden’s comments using those words made no mention of the travel ban, and it wasn’t even clear whether he was aware it had been announced around the same time he spoke.

[In VP debate, plexiglass an extra participant on the stage]

After Harris attacked the administration’s response, Pence shot back, “When you say with the American people have done over these last eight months hasn’t worked, that’s a great disservice to the sacrifices the American people.” In fact, Harris had said nothing criticizing the steps taking by average Americans; she criticized the administration’s actions. It was a remarkable deflection.

The one that might have taken the cake, though, was when he tossed out a counterfactual. He pointed to the swine flu pandemic that occurred during the Obama-Biden administration in 2009.

“Thankfully, it was ended up not being as lethal as the coronavirus,” Pence said. “But before the end of the year, when Joe Biden was vice president of the United States, not seven and a half million people contracted the swine flu; 60 million Americans contracted the swine flu. If the swine flu had been as lethal as the coronavirus in 2009 when Joe Biden was vice president, we would have lost 2 million American lives.”

That’s quite the talking point. The first problem is that the 60 million swine flu infections is based on estimates, while the current coronavirus case count is based on actual tests (and many more have likely been infected, per government health officials). The bigger problem, though, is that if the swine flu were anywhere near as deadly as the coronavirus, there is no question that mitigation would have been much more severe much earlier.

During the 2020 primaries, Harris attempted to set herself up as uniquely capable of debating Trump, citing her past as a prosecutor.

She didn’t always fulfill that promise against Pence.

One such instance was when Harris sought to combat the charge that Biden might raise taxes on the middle class. Pence pointed to Biden’s promise to repeal the Trump tax cuts. Harris said that, in fact, Biden wouldn’t raise taxes on anyone making less than $400,000.

But then Pence, cut in. At first, Harris tried to stop him.

But Pence wouldn’t let it lie. “It’d be important if you said the truth,” he said.

Harris paused, smiling at Pence but not seeming to know what to say next, and Pence took the opening to take the stage, robbing Harris of her time.

Harris won plaudits from her supporters for her “I’m speaking” line - which she repeated several times - but if you’re going to claim your time, you should probably then take it.

At another point, Pence ran off statistics about the loss of manufacturing jobs under the Obama-Biden administration. The answer was waiting for Harris - that those numbers include a massive recession that administration inherited - but Harris offered only a brief response about Pence opposing the bailout for the automotive industry.

At another, Pence pressed Harris repeatedly on a question Biden refused to answer at last week’s debate - whether their ticket supports some Democrats' proposals to pack the Supreme Court by adding justices. Like Biden, Harris repeatedly declined to answer it, and Pence was allowed to drive that point home over and over again.

Pence certainly spent his fair share of time not answering the actual questions - in fact, more of it (which we’ll get to). But he did drive home what he wanted to get across.

Harris seemed very cautious throughout, which is perhaps understandable given where her ticket stands in the polls. But Pence is good at bulldozing - both his opponent and the moderator, which happened at several points in the debate - and Harris wasn’t always ready with a retort.

To the extent Harris is a good debater and interlocutor, it often shows in her ability to create a memorable moment in a debate. That’s been the case both in 2020 Democratic debates and at Senate hearings. And that moment on Wednesday night came on Obamacare.

While Democrats have long attacked Trump for seeking to overturn Obamacare and its coverage for preexisting conditions - both legislatively and more recently in the courts - Harris drove it home in a way few have.

This is a central part not just of this campaign but of the effort to stop Amy Coney Barrett’s Supreme Court nomination, where Harris sits on the Judiciary Committee that will take up her nomination. Expect that clip to be played over and over again.

Wednesday’s debate didn’t carry anywhere near the number of interruptions of last week’s, but it came up very short in one key respect: Actually answers to the questions that were posed.

Repeatedly, the two candidates responded to direct questions by pivoting to what they wanted to talk about, rather than the question that was asked, and they were seldom called out. Even when Pence accused Harris of not answering his court-packing question, it came in the same answer in which he declined to answer a question about protecting preexisting conditions.

Pence repeatedly acknowledged he was pivoting to something that wasn’t asked of him, which was at least transparent, but rarely returned to the actual substance of the question. He ignored the actual questions about whether climate change is an existential threat, about whether he’s spoken with Trump about taking over if Trump is incapacitated with the coronavirus, and about whether we’re friends or enemies with China.

Harris ignored note just Pence’s question about court-packing, but also moderator Susan Page’s question about how much the Green New Deal informs her campaign’s climate policy. When Page asked her about what the Biden administration would do differently about the coronavirus come January, Harris mostly talked about the Trump administration’s failings, while saying only that there was a plan for “a national strategy for contact tracing, for testing, for administration of the vaccine and making sure that it will be free for all.” More detail on that would have been nice.

Both candidates also virtually ignored a question about the health of the septuagenarians whose tickets they’re running on.

Page asked great questions. It would be great if there was something in the rules that made it so the candidates actually had to answer them. Without that, debate viewers suffered.