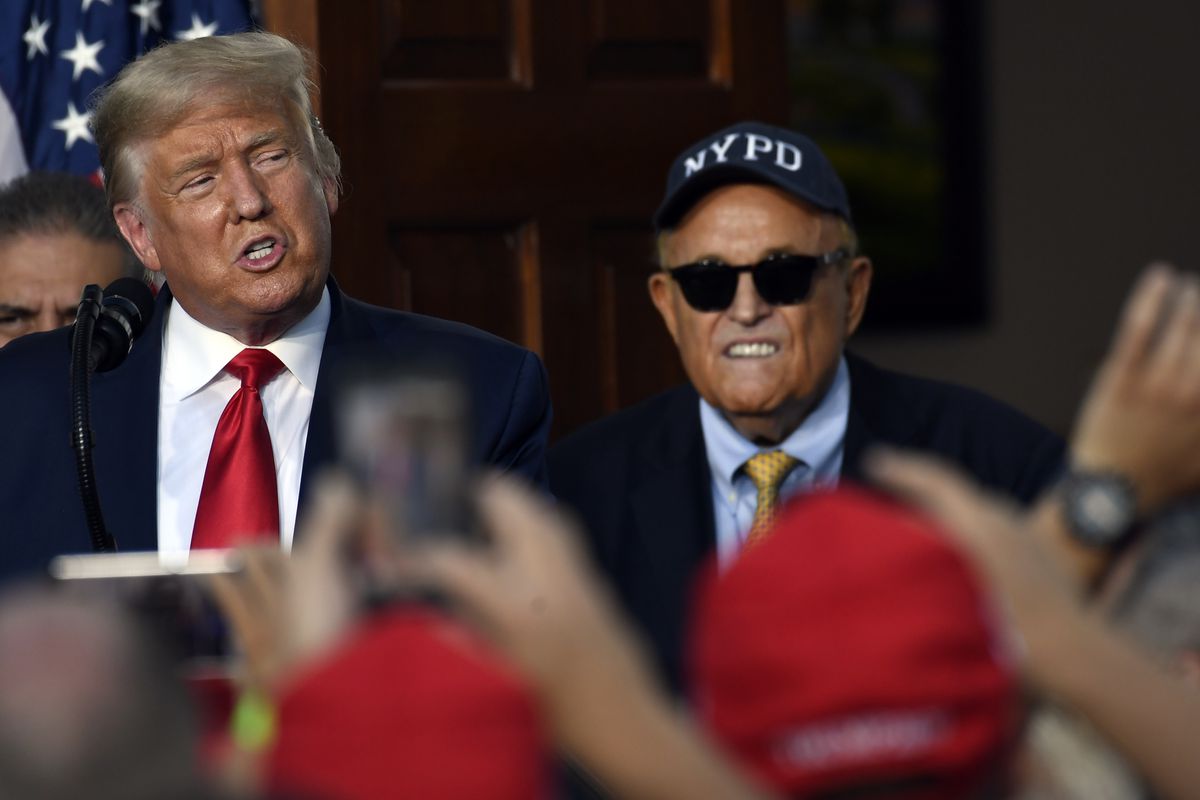 The warnings were based on multiple sources, including intercepted communications, that showed Giuliani was interacting with people tied to Russian intelligence during a December 2019 trip to Ukraine, where he was gathering information that he thought would expose corrupt acts by former vice president Joe Biden and his son Hunter.

The intelligence raised concerns that Giuliani was being used to feed Russian misinformation to the president, the former officials said, speaking on the condition of anonymity to discuss sensitive information and conversations.

The warnings to the White House, which have not been previously reported, led national security adviser Robert O’Brien to caution Trump in a private conversation that any information Giuliani brought back from Ukraine should be considered contaminated by Russia, one of the former officials said.

The message was, “Do what you want to do, but your friend Rudy has been worked by Russian assets in Ukraine,” this person said. Officials wanted “to protect the president from coming out and saying something stupid,” particularly since he was facing impeachment over his own efforts to strong-arm Ukraine’s president into investigating the Bidens.

But O’Brien emerged from the meeting uncertain whether he had gotten through to the president. Trump had “shrugged his shoulders” at O’Brien’s warning, the former official said, and dismissed concern about his lawyer’s activities by saying, “That’s Rudy.”

Giuliani visited the White House on Dec. 13, shortly after the House Judiciary Committee voted to proceed with articles of impeachment, and he met with Trump at the president’s resort in Florida eight days later.

Officials' warnings about Giuliani underscore the concern in the U.S. intelligence community that Russia not only is seeking to reprise the disinformation campaign it waged in 2016, but also may now be aided, unwittingly or otherwise, by individuals close to the president. Those warnings have gained fresh urgency in recent days. The information that Giuliani sought in Ukraine is similar to what is contained in emails and other correspondence published this week by the New York Post, which the paper said came from the laptop of Hunter Biden and were provided by Giuliani and Stephen Bannon, Trump’s former top political adviser at the White House.

The Washington Post was unable to verify the authenticity of the alleged communications, which concern Hunter Biden’s business dealings in Ukraine and China.

The former officials said Giuliani was not a target of U.S. surveillance while in Ukraine but was dealing with suspected Russian assets who were, leading to the capture of some of his communications.

Giuliani was interested in acquiring information from his foreign contacts about Burisma, the Ukrainian energy company where Hunter Biden held a board seat, as well as Biden’s activities in Ukraine, China and Romania, two former officials said. Giuliani’s eagerness was so pronounced “that everybody [in the intelligence community who knew about it] was talking about how hard it was going to be to try to get him to stop, to take seriously the idea that he was being used as a conduit for misinformation,” one former official said.

Earlier in 2019, U.S. intelligence also had warned in written materials sent to the White House that Giuliani, in his drive for information about the Bidens, was communicating with Russian assets.

Spokespersons for the FBI and the Justice Department declined to comment. A spokesperson for the Office of the Director of National Intelligence referred inquiries to the White House.

“National Security Advisor O’Brien and White House Counsel Cipollone meet with the President frequently on a variety of matters. Ambassador O’Brien does not comment on sensitive intelligence topics, or on the advice he provides President Trump,” National Security Council spokesman John Ullyot said in a written statement. The national security adviser “can say that the President always treats such briefings with the utmost seriousness. The characterization of the meeting as described in this article is not accurate.”

In a text message on Thursday, Giuliani said that he was never informed that Andriy Derkach, a pro-Russian lawmaker in Ukraine whom he met on Dec. 5 in Kyiv, was a Russian intelligence asset. Giuliani said he “only had secondary information and I was not considering him a witness.” But Giuliani met again with Derkach in New York two months later, hosting him on his podcast, and he has promoted his unsubstantiated claims about the Bidens, describing Derkach as “very helpful.”

In September, the U.S. Treasury Department sanctioned Derkach for allegedly running an “influence campaign” against Joe Biden, calling the Ukrainian “an active Russian agent for over a decade” who has maintained “close connections with Russian intelligence services.”

In August, the Office of the Director of National Intelligence publicly described Derkach as part of a Russian effort to interfere with the 2020 election by smearing Biden, accusing Derkach of “spreading claims about corruption - including through publicizing leaked phone calls - to undermine” Biden and the Democrats.

For some officials, Trump’s willingness to meet with Giuliani despite warnings about Russian influence smacked of the collusion allegations that dogged the president after the 2016 election. Special counsel Robert Mueller III said he did not find evidence to substantiate a criminal charge of conspiracy against anyone in the Trump campaign. But his investigation documented numerous instances in which Trump associates knowingly sought damaging information from Russian individuals and their proxies about Hillary Clinton, the 2016 Democratic presidential candidate.

Giuliani was not shy about his pursuit of information that might damage Biden, taking a documentary film crew from the right-wing One America News to Ukraine in December when he met with Derkach. At the time, Giuliani claimed that Trump had directed him to share his findings with the Justice Department and Senate Republicans.

Officials' fears about what Giuliani might tell the president were compounded by Trump’s generally furious reaction to negative intelligence about Russia and its efforts to influence U.S. politics.

“Whenever you talk to the president, no matter what your facts are, if you mention Russia, that’s it - you’ve hit the third rail,” one of the former officials said. Trump has called Russia’s documented campaign of election interference a “hoax” that was drummed up to challenge the legitimacy of his election and undermine his administration.

Trump has relied for years on Giuliani’s counsel. But in recent months, as the president has found himself sinking in the polls, the former New York mayor has become an even closer confidant, aides and officials said. Giuliani has visited the White House for debate preparations, given the president tips on his response to the coronavirus pandemic, promoted the controversial drug hydroxychloroquine as a treatment for covid-19 and discussed what political events and rallies he thinks the president should hold.

Giuliani was also a major source of information during impeachment, when Trump tried to rebut allegations of abuse of power by airing false allegations that Biden, while serving as vice president, had pressed for the removal of a Ukrainian prosecutor to spare his son from being investigated.

During his impeachment trial in the Senate, Trump denied sending Giuliani to Ukraine to dig up dirt on Biden, who was then a contender for the Democratic presidential nomination. But after his acquittal, Trump reversed himself, acknowledging in a podcast interview with Geraldo Rivera that he had directed Giuliani to go to Ukraine.

Months earlier, Trump had also told Ukrainian President Volodymyr Zelensky that he should meet with Giuliani.

“Mr. Giuliani is a highly respected man. He was the mayor of New York City, a great mayor, and I would like him to call you,” Trump told Zelensky in a phone call July 25, 2019, according to a partial transcript released by the White House. “I will ask him to call you along with the Attorney General. Rudy very much knows what’s happening and he is a very capable guy. If you could speak to him that would be great.”

That phone call was the centerpiece of the impeachment case against the president.