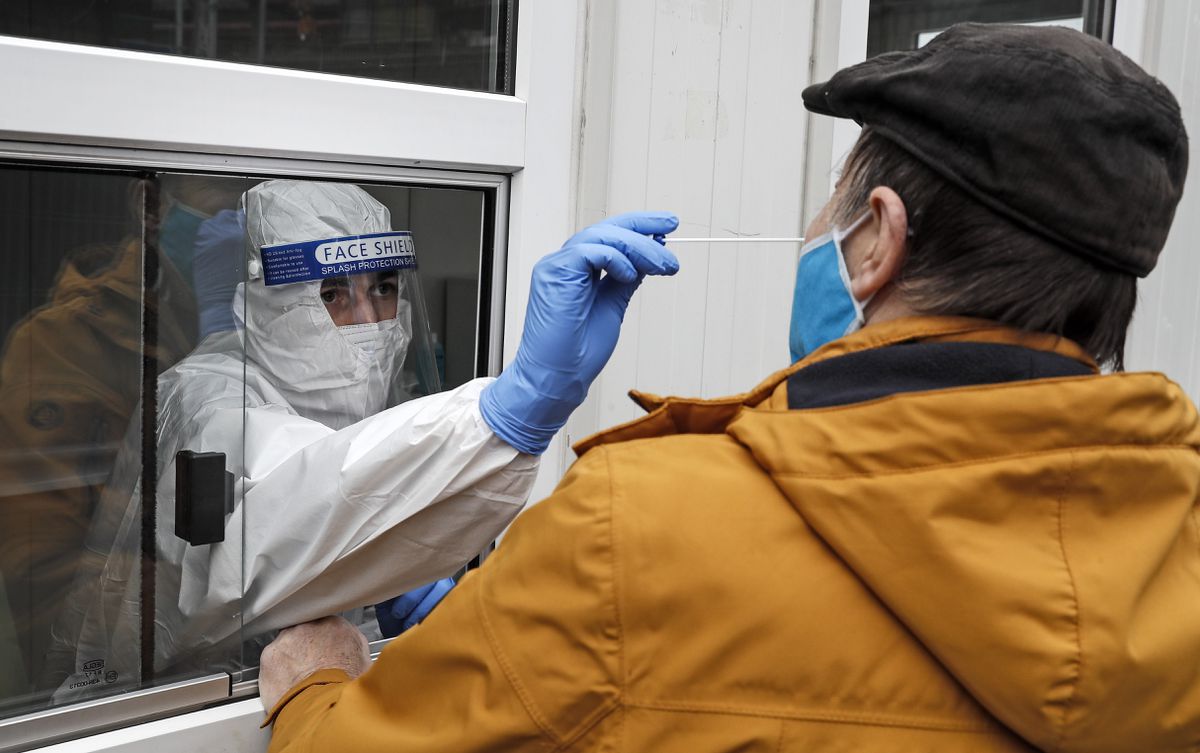 BERLIN — Chancellor Angela Merkel urged Germans to come together like they did in the spring to slow the spread of the coronavirus as the country posted another daily record of new cases Saturday.

“Difficult months are ahead of us,” she said in her weekly video podcast. “How winter will be, how our Christmas will be, that will all be decided in these coming days and weeks, and it will be decided by our behavior.”

Meanwhile, new restrictions went into effect in several other European nations in an effort to staunch the resurgence of the pandemic.

In Paris and eight other French cities, restaurants, bars, movie theaters and other establishments were being forced to close no later than 9 p.m. to try to reduce contact among people. The country was deploying 12,000 extra police officers to enforce the new rules.

Many restaurant owners have bristled at the order. An earlier months-long lockdown devastated the sector.

“I have the right to question the government’s approach, I think it’s a catastrophic measure for the industry,” said Xavier Denamur, who owns Les Philosophes and several other bistros in Paris’s chic Le Marais district, saying that if nothing else, the curfew should be 11 p.m.

“At least that would not destroy us,” he said. “There’s no evidence that this difference of a couple of hours will have any effect on the virus circulating.”

In Britain, a three-tier regional approach to battle the pandemic introduced by Prime Minister Boris Johnson went into effect, with each level bringing progressively tighter restrictions.

On Saturday, tier-2 cities like London and York were subject to a ban on socializing with people from other households indoors, while the county of Lancashire joined Liverpool in tier 3 with the tightest restrictions.

Among other things, that means pubs have been forced to close and socializing with others is banned even in many outdoor settings.

In Northern Ireland a lockdown lasting four weeks came into force Friday. All pubs and restaurants must close except for takeaway services, and schools will close for two weeks for an extended half-term holiday.

Data from Friday showed that a further 136 people died in the U.K. within 28 days of testing positive for coronavirus, bringing the total official toll to 43,429.

The World Health Organization has warned that intensive care units in a number of European cities could reach maximum capacity in the coming weeks if the number of infections doesn’t slow.

Austrian Foreign Minister Alexander Schallenberg joined the list of top politicians who have tested positive for the virus, and was quarantined though he showed no symptoms, his office told Austria’s APA news agency.

The Vatican, meanwhile, said someone who lives in the same hotel as Pope Francis tested positive for the virus, adding to the 11 cases of COVID-19 among the Swiss Guards who protect him.

German President Frank-Walter Steinmeier, the country’s head of state, was quarantined while awaiting the results of a coronavirus test after a bodyguard was infected, his office said.

Germany, which was widely lauded for rapidly slowing the spread of the virus when the pandemic first broke out, has seen rapidly climbing numbers in recent days.

Like most countries, Germany has been grappling with how to keep schools and businesses open while trying to prevent people from coming into close contact with one another.

Germany has registered a total of 356,387 coronavirus cases and a relatively low 9,767 deaths.

“What brought us so well through the first half year of the pandemic?” she asked. “It was that we stood together and obeyed the rules out of consideration and common sense. This is the most effective remedy we currently have against the pandemic and it is more necessary now than ever.”

In the neighboring Czech Republic, the number of new infections surpassed 10,000 for the first time, surging to 11,105 on Friday, the Health Ministry said. The country has now registered a total of 160,112 cases, including 1,283 deaths.

Despite new restrictive measures to slow the surge, Health Minister Roman Prymula said he still expects a rise in those testing positive for about two weeks.

Next door, Slovakia said it was acquiring 13 million rapid antigen tests — enough to test each member of the population twice — and would establish 6,000 testing sites.

Prime Minister Igor Matovic said testing will take place over the next two weekends, starting with the three or four hardest hit counties. It was not immediately clear whether tests would be mandatory.

The measures were taken after Lombardy, Italy’s most populous region, once again became the most affected, adding more than 2,000 infections a day. Hospitals are coming under strain and intensive care units are filling up.

The new measures allow only table service for bars from 6 p.m., ban takeout alcohol sales from that time and prohibit all consumption of booze in public spaces.

Italy’s other hardest hit region, southern Campania, has taken similarly strict measures, including a shutdown of schools for two weeks. After parents protested, the regional governor backed off Friday and allowed daycare centers to remain open.

In the capital, Rome, residents grumbled as cases climbed, fearing a return to the strict country-wide measures that were imposed when the virus was spreading out of control.

“The situation is critical thanks to the morons, because I call them morons, who have not respected the rules,” said resident Mario Massenzi. “And if we fall back into the same situation as in March, we are finished.”

Thomas Adamson in Paris, Sylvia Hui in London, Nicole Winfield in Rome, Colleen Barry in Milan and Karel Janicek in Prague contributed to this report.