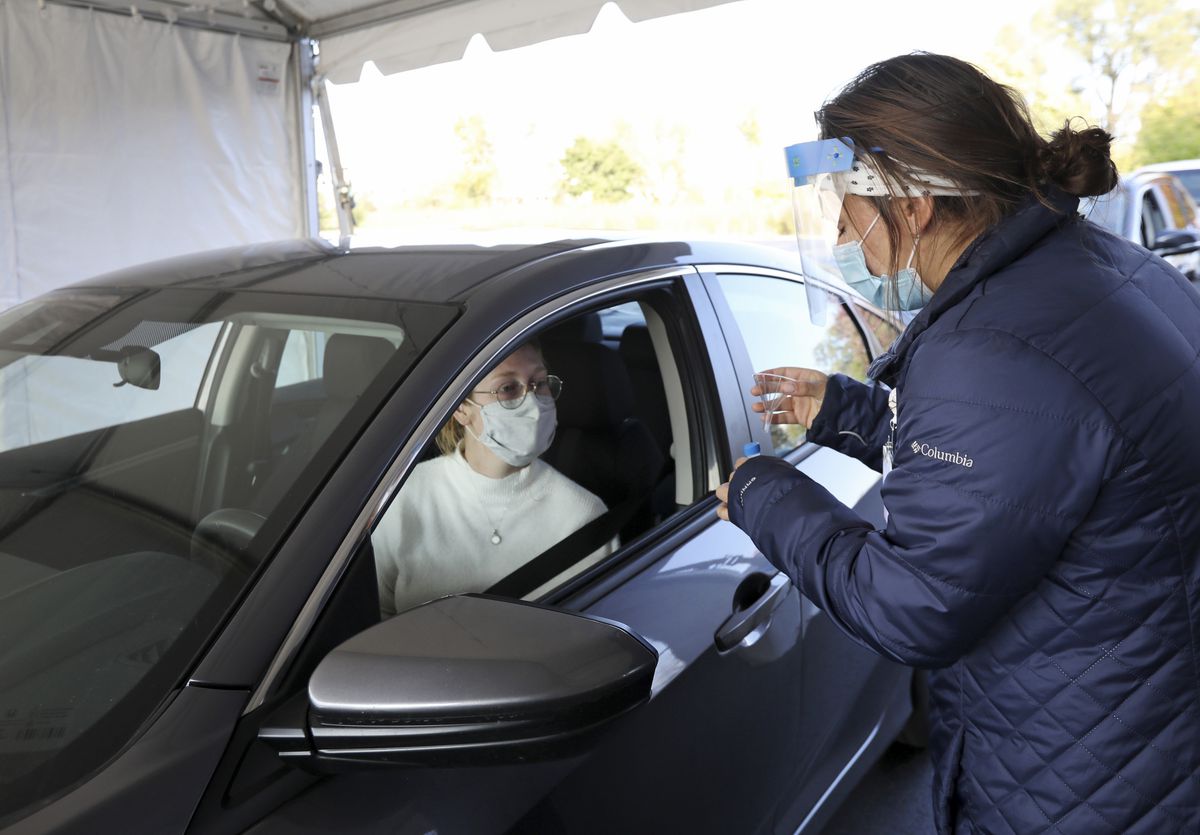 Nursing assistant Monica Brodsky, right, hands McKensie Burreson, of Madison, a funnel and vial for a saliva test that tests for COVID-19 at a drive-thru testing site in the parking lot at the UW Health Administrative Office Building in Middleton, Wis., Monday, Oct. 5, 2020. (Amber Arnold/Wisconsin State Journal via AP)

Nursing assistant Monica Brodsky, right, hands McKensie Burreson, of Madison, a funnel and vial for a saliva test that tests for COVID-19 at a drive-thru testing site in the parking lot at the UW Health Administrative Office Building in Middleton, Wis., Monday, Oct. 5, 2020. (Amber Arnold/Wisconsin State Journal via AP)

With cases surging to new highs and hospital capacity running low, North Dakota Gov. Doug Burgum teared up describing a state “caught in the middle of a covid storm.”

To weather it, he said at a news conference last week, people would need to keep their distance, wear masks and avoid gatherings. But the one thing North Dakota did not need were legal limits on reckless behavior.

“It’s not a job for government,” Burgum, a Republican, declared.

The novel coronavirus is hammering America’s heartland this fall, with records shattered daily in states that had escaped the worst of the disease this spring and summer. Case numbers also are rising again in other states where the virus was thought to be under control after months of widespread illness.

Yet even as health authorities in small cities and rural towns plead for help in tamping down deadly outbreaks, many Republican governors are resisting new measures to stop the spread. Some are even loosening rules already on the books.

Instead, they preach the mantra of “personal responsibility,” insisting that government interventions such as mask mandates or business restrictions are either unnecessary or harmful, and that people should be trusted to make their own decisions about how to keep themselves - and each other - healthy.

“This is a job for everybody,” Burgum said, describing recommendations for safe behavior, but no new requirements.

Public health experts say that is an inadequate prescription, one that carries great peril as infections climb, the weather drives people indoors and large segments of the population are proving less willing to take the virus seriously.

"This really demands a coordinated, orchestrated higher-level response than just saying to an individual person, ‘Here’s what you might want to try,’ " said David Aronoff, director of the Division of Infectious Diseases at the Vanderbilt University School of Medicine.

An overreliance on personal responsibility, health officials say, is one of the reasons America’s struggle with the coronavirus has been so destructive, with more than 8 million cases and at least 218,000 people dead. And they maintain it is unlikely to be the solution now - especially as Republican leaders from President Donald Trump on down send misleading messages and model dangerous behavior.

Covid-19, the disease caused by the coronavirus, sent Trump to the hospital for four days this month, with doctors deploying the latest therapeutics - drugs unavailable to many Americans. Yet he has continued to cast doubt on the effectiveness of masks while maintaining that people should not be “afraid” of the coronavirus and bashing public health measures intended to limit viral spread.

Republican governors have mimicked aspects of that stance. While Democratic governors in blue states such as New York, New Mexico and California have rolled back reopening plans in response to rising coronavirus rates, the opposite has been true of Republican leaders in red states where the virus is now running rampant.

Coronavirus hospitalizations in Iowa have regularly hit new highs this month, and the state last week surpassed 1,500 total deaths. But Iowa Gov. Kim Reynolds has refused to revisit her decision to lift most restrictions on businesses and to allow students back to class without masks.

Trump, the Republican said, was “right. We can’t let covid-19 dominate our lives.”

Texas Gov. Greg Abbott, meanwhile, has forged ahead with plans to reopen bars, despite the fact that infectious-disease specialists say they are a prime vector for coronavirus transmission. The state has been averaging nearly 5,000 new cases and nearly 100 deaths each day. But Abbott, a Republican, said he saw no reason Texas would not “be able to reopen 100 percent.”

In South Dakota - which together with its neighbor to the north has had the fastest-growing coronavirus infection rate in the country - Republican Gov. Kristi Noem has played down the significance of the climbing caseload, claiming that it’s due to testing and is “normal.”

“We have triple the amount of testing that we’re doing in the state of South Dakota, which is why you’re seeing elevated positive cases,” she said. “That is normal. That’s natural. That’s expected.”

But a rise in tests would not explain why hospitalization and death rates have also spiked.

Noem has become a star in Trump’s circle by joining in his antagonism toward mainstream scientific opinion: She is one of the few governors who refused to issue a stay-at-home order in the spring, has repeatedly questioned the validity of using masks to reduce viral spread and hosted the president for a massive, non-social-distanced Fourth of July celebration at Mount Rushmore.

The state’s struggles now, critics say, are the inevitable result of a failure to take the virus seriously.

“Covid in our state has exploded,” said Linda Duba, a Democratic state legislator. “And that’s unfortunately to be expected when there is no encouragement from our leaders to mask, to social distance or to take basic precautions.”

Late last week, the state of fewer than 900,000 people was racking up around 900 new cases a day, with around 300 people hospitalized.

More than 300 people have died statewide, with one of Duba’s colleagues in the state House of Representatives among them. Yet when legislators packed the floor in the state capitol building to listen to Noem’s speech during a special session this month, Duba said she could count on 10 fingers the number wearing masks.

“I sat at the very back, and high-tailed it out of there as soon as the speech was over,” she said.

The lax attitude toward masks displayed by politicians can be seen among the public, much to the frustration of front-line hospital workers.

Benjamin Aaker, an emergency room doctor, said he and his colleagues have been “proclaiming from the rooftops” the virtues of masks and social distancing. But to little effect.

The same has been true in North Dakota, said Renae Moch, director of public health in the state capital, Bismarck.

Last weekend, North Dakota was down to 17 open ICU beds, with some people having to be sent out of state for care. By Friday, the state was contending with more than 5,000 active coronavirus cases, up from just over 3,000 at the start of the month.

Yet Moch said that even though that endangers everyone - from car crash victims to heart attack patients - public health workers were getting little cooperation from the public in fighting the virus. Mask usage in the state remains low, she said, and contact tracers have found that people who test positive routinely lie.

"The tracers will ask, ‘How many people in your household?’ ‘Just me.’ ‘Have you been anywhere?’ ‘Nope,’ " she said, recounting a typical conversation. “Now, we live in a small enough area that we know that that’s just not truthful.”

While Burgum, the governor, has been preaching “personal responsibility” for months, Moch said a mask mandate would be more effective in clarifying how people can protect themselves - and each other.

“People need to know the impact of their decisions,” Moch said. “And I don’t think public officials have been very clear about that.”

While North Dakota had avoided a serious bout with coronavirus until recently, other states have endured earlier waves and thought they had the disease beaten - only to find it roaring back now.

When Tennessee Gov. Bill Lee lifted his few remaining restrictions at the end of September, leaders of the Volunteer State seemed to think they had brought their coronavirus outbreak under control.

“Tennesseans have learned how to assess risk and how to take the right steps to protect themselves and those around them,” Lee, a Republican, said at a news conference at the time.

Two weeks later, however, cases are surging once again. Lee is quarantining after exposure to an infected security staff member. And experts say the state’s struggles should be a lesson that the pandemic requires constant vigilance - and an aggressive response.

“You can almost follow the timeline as for when things got loosened and when the spike came,” said Alex Jahangir, a physician who chairs the Nashville Metropolitan Board of Health. He also noted it would be “very helpful if the state would reimpose some of the stuff they had before.”

Tennessee, for months, largely has left it in the hands of local leaders to set rules around the coronavirus pandemic. Masks, for example, never have been mandated by the state; instead, Lee has signed orders allowing counties to set policies of their own.

The result has been a messy patchwork of protections, with rules that vary depending on geography.

Davidson County, the sprawling central Tennessee expanse that includes Nashville, has required face coverings for its workers, residents and visitors for months. But there’s no such rule in many other parts of the state, including an hour’s drive south, in Maury County, which hosted a record-breaking 22,000 people for an annual fair last month, according to local media.

In South Dakota, there is no statewide mask mandate and the cities have nearly all declined to impose their own. The college town of Brookings is the lone exception, with councilors passing a restriction last month following contentious public hearings.

Local leaders had feared that without more protections, Brookings would be overrun by outbreaks this fall as students returned to school.

The mandate has helped, with residents largely complying, said Nick Wendell, a council member who backed it. But he noted that outlying areas of the county lack a mandate, and that has led to uncertainty.

South Dakota may be the “land of infinite variety,” as the informal motto goes. But “it would be helpful if we were all linking arms and doing this together. Folks are confused. Folks are tired,” Wendell said. “And when you have mixed messaging, that’s challenging.”