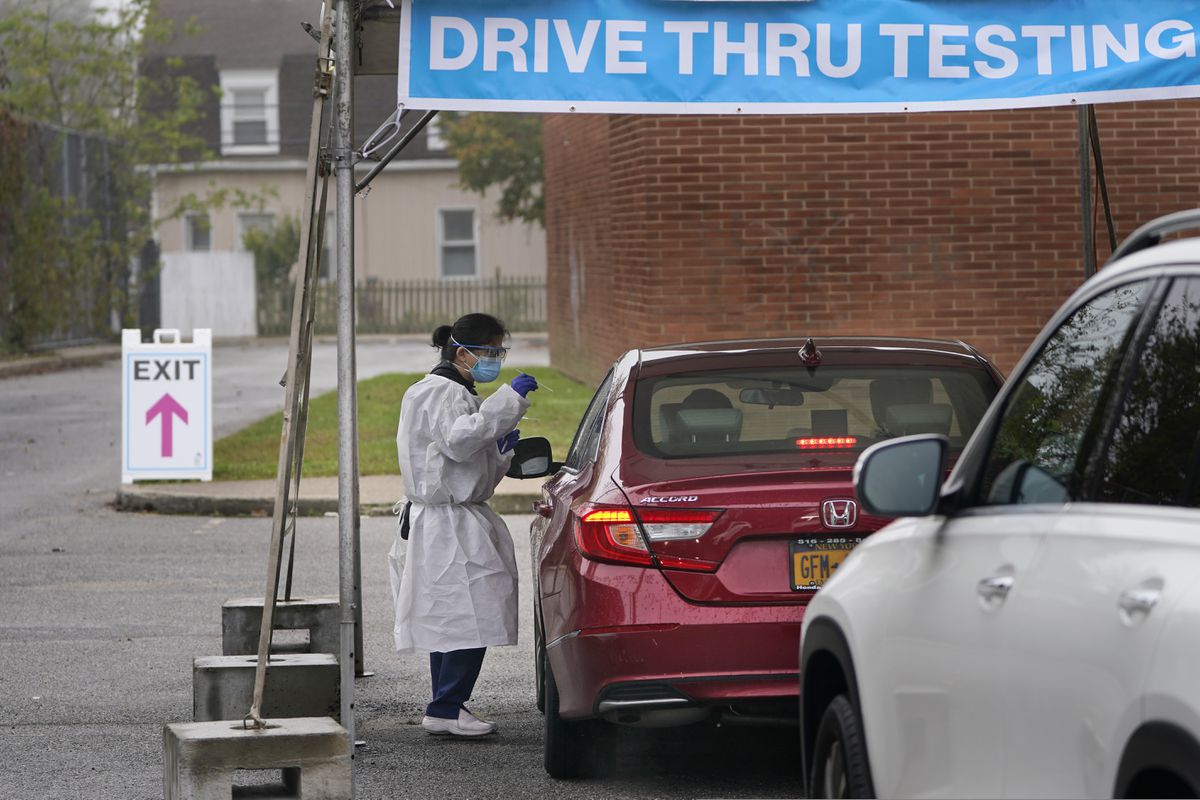 FILE - In this Oct. 21, 2020, file photo, medical personnel prepare to administer a COVID-19 swab at a drive-through testing site in Lawrence, N.Y. The United States is approaching a record for the number of new daily coronavirus cases in the latest ominous sign about the disease's grip on the nation. (AP Photo/Seth Wenig, File)

FILE - In this Oct. 21, 2020, file photo, medical personnel prepare to administer a COVID-19 swab at a drive-through testing site in Lawrence, N.Y. The United States is approaching a record for the number of new daily coronavirus cases in the latest ominous sign about the disease's grip on the nation. (AP Photo/Seth Wenig, File)

America on Friday hit its highest daily number of coronavirus case since the pandemic began, recording at least 81,400 new infections and surpassing the previous record set during the summertime surge of cases across the Sun Belt.

The rising numbers puts the nation on the precipice of what could be its worst stretch to date in the pandemic with some hospitals in the West and Midwest already overwhelmed and deaths counts beginning to rise.

The current surge is considerably more widespread than the waves from last summer and spring. The unprecedented geographic spread of the current surge makes it more dangerous, with experts warning it could lead to dire shortages of medical staff and supplies. Already, hospitals are reporting shortfalls of basic drugs needed to treat covid-19, the disease caused by the novel coronavirus.

And it’s not simply a matter of increased testing identifying more cases. Covid-19 hospitalizations increased in 38 states over the past week and are rising so quickly that many facilities in the West and Midwest are already overwhelmed. The number of deaths nationally has crested above 1,000 in recent days.

The last time the country hit a new daily record for coronavirus cases - 76,533 on July 17 - just four states accounted for more than 40,000 of those cases: Arizona, California, Florida and Texas.

On Thursday, the daily number of cases reached 73,686. But this time, it’s 14 states accounting for that same lion’s share of cases. And 22 states have broken their records for single-day highs of cases in the past two weeks.

More than 170 counties across 36 states were designated rapidly rising hotspots, according to an internal federal report produced Thursday for officials at the Department of Health and Human Services and obtained by The Washington Post.

“One key way we got through previous waves was by moving health-care workers around. That’s just not possible when the virus is surging everywhere,” said Eleanor J. Murray, an epidemiologist at Boston University.

Equally alarming, Murray said, is that no one knows how high this wave will grow before peaking.

“We are starting this wave much higher than either of the previous waves,” she said. “And it will simply keep going up until people and officials decide to do something about it.”

More than 8.3 million Americans so far have been infected with the coronavirus, and at least 222,000 have died, according to a database maintained by The Post.

The high case numbers of recent days have stoked concerns because the country has not even hit the stretch of holidays and cold weather, which experts have long warned will send cases soaring even higher. More interactions could mean more transmission during celebrations of Halloween, Christmas and the New Year. The winter’s cold, dry air will also help the virus stay stable longer, even as it drives people to hunker down together indoors.

“It won’t be as simple as closing public spaces,” Birx said, pointing to increased gatherings in people’s homes. “What has happened in the last three to four weeks is that people have moved their social gatherings indoors.”

In some areas of Wisconsin, 90 percent of hospital intensive care unit beds are full, the office of Gov. Tony Evers, D, said. The first patient was admitted Wednesday to a makeshift field hospital erected at a state fairgrounds.

Hospitals from Missouri to Idaho are starting to reach capacity. On Thursday, America had more than 40,000 current covid-19 hospitalizations - the first time that level has been reached since August. In the past three weeks, 34 states saw sizable increases in hospitalizations, and the number has more than doubled in Connecticut, Montana, New Mexico and Wyoming.

In Utah, leaders are trying to open a field hospital at an exposition center. State epidemiologist Angela Dunn warned that the health-care system is at capacity, hospital staff are exhausted, and Utahans are getting scared.

“You know, I just, I don’t know what to do anymore,” Dunn said at a Thursday news conference, pleading for residents to be more cautious. “I’m really not trying to scare anyone. I’m just trying to inform you of what’s going on.”

Experts said the problem facing many hospitals this winter won’t be finding enough beds. It will be ensuring that hospitals have sufficient specialized staffing.

“Creating beds is relatively easy, but what do you do when you outstrip ICU nurses, doctors and teams?” said Michael T. Osterholm, director of the University of Minnesota’s Center for Infectious Disease Research and Policy.

In recent months, health-care workers have been able to lower mortality rates - the ratio of patients who die once infected. Much of that progress has come through hard-earned expertise by ICU staff - new approaches and knowledge about how to combat the virus, such as when to use ventilators, the adoption of treatments such as steroids and proning patients, which helps with breathing by shifting them onto their abdomens.

But the hard-won battle to lower mortality rates could be imperiled as hospitals are overwhelmed and staffing gets stretched, Osterholm said. And as the pandemic has seeped into rural swatches of the Midwest, skeleton staffs at smaller hospitals are shrinking further as doctors and nurses fall ill.

A report this week by Osterholm’s center showed shortages in 29 of the 40 basic but critical drugs often used for covid-19 patients. That includes antibiotics, sedatives like propofol that are used to calm patients during intubation and heart medication such as norepinephrine. And because of the widespread nature of the infections, hospitals are finding it harder to draw from excess supplies of such drugs elsewhere.

The nation’s growing fatigue with the pandemic will likely make it even harder to contain a wintertime wave, specialists fear.

Even as hundreds of people are dying each day, “there’s this false sense of calm right now,” said Tom Inglesby, director of the Johns Hopkins Center for Health Security. “We have the president saying, ‘We’re rounding the corner.’ We have state leaders openly defying public health guidances.”

Inglesby pointed to plans and metrics many states laid out last spring for reopening. “That’s been completely disregarded in many places,” he said.

In North Dakota - among the hardest-hit states - Gov. Doug Burgum, R, put the onus on individuals to wear masks and avoid gatherings.

“It’s not a job for government,” Burgum recently declared.

At Thursday night’s final presidential debate, President Donald Trump claimed the virus was “going away” and “we’re learning to live with it.” His Democratic rival, former vice president Joe Biden, responded, “We’re learning to die with it.”

Experts say rapid action is needed by leaders and residents to tamp down virus transmission.

“It’s been framed as this false choice between full shutdowns and doing nothing, but that’s not the case,” said Inglesby, who urged people to wear masks and avoid large gatherings.

Politicians also need to stop minimizing the risk posed by the virus and start discussing openly with the public the hard decisions and trade-offs that lie ahead, Murray said. Is it, for example, worth keeping bars open if it means having to close schools?

“I worry sometimes about being too pessimistic,” she said. "We are not making predictions and saying this dark winter is somehow inevitable. We’re trying to warn people this is how it will be if we don’t do something about it.

“But it doesn’t have to be that way.”

The Washington Post’s Lena H. Sun contributed to this report.