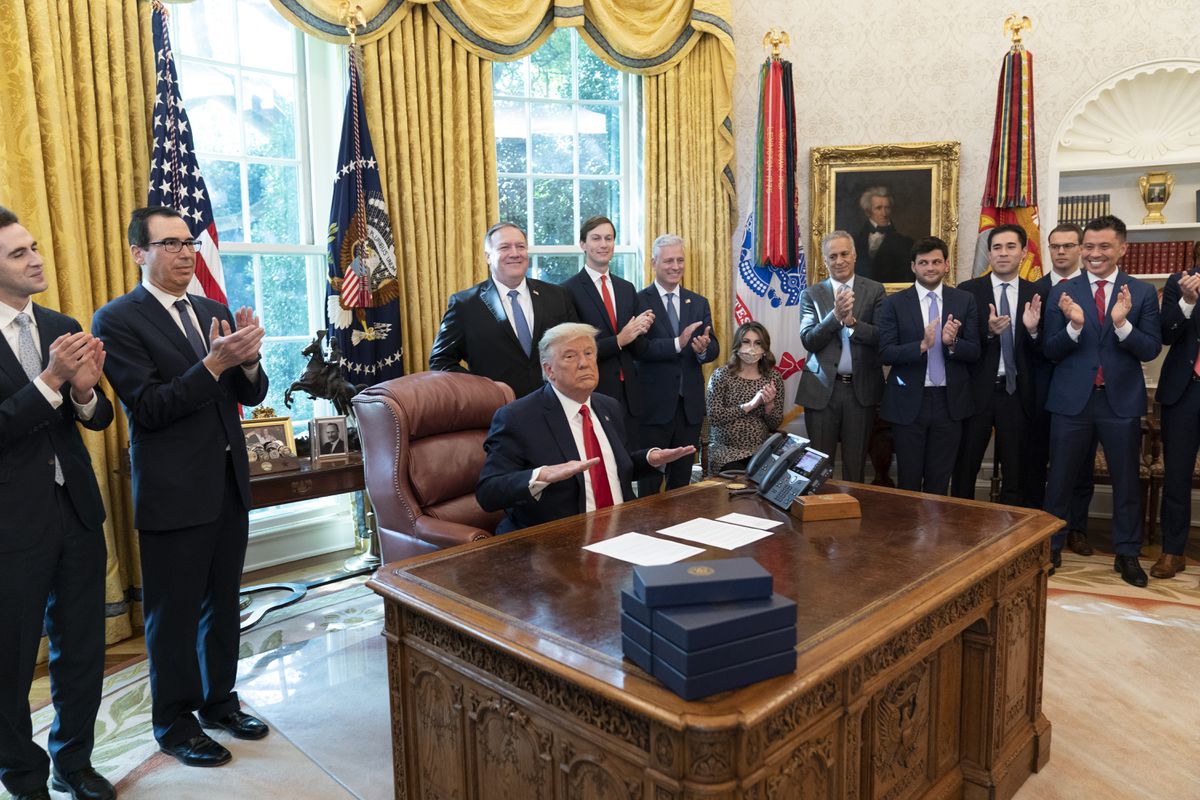 JERUSALEM - Sudan and Israel have agreed to begin normalizing relations and set aside decades of hostility, President Donald Trump and leaders of both nations said Friday, marking the third such accord brokered by the White House in the weeks leading up to the U.S. presidential election.

Trump announced the agreement in Washington, inviting reporters into the Oval Office during a telephone conference he held with Israeli and Sudanese leaders and praised what he called a peace agreement. The deal does not immediately entail full diplomatic relations, for instance with an exchange of embassies, but is an agreement to start discussions over normalization with an initial focus on economic and related matters.

Sudan becomes the third Arab country in recent weeks to establish ties with Israel, as the Trump administration presses Muslim-majority states to make a separate peace with Israel that does not depend on resolving the conflict with the Palestinians.

Like the agreements with the United Arab Emirates and Bahrain, this one sidelines the Palestinians, who have boycotted talks with Trump’s envoys, while drawing new economic and diplomatic partnerships with Israel.

Trump casts the effort as a way to strengthen Israel’s security, a priority for American Jewish supporters of Israel. Those supporters include conservative Jewish Republicans who make up an important part of Trump’s political base in Florida, a linchpin to his reelection next month.

Trump is trailing in national polls but is predicting victory. Although foreign policy is not a major focus of his campaign, his record of supporting Israel is an exception. A reference to his 2017 decision to move the U.S. Embassy from Tel Aviv to Jerusalem is a standard applause line at Trump rallies, and the normalization agreements are now also a regular feature.

“It’s amazing and its fast,” Israeli Prime Minister Benjamin Netanyahu said during the call, referring to the normalization agreements. He demurred when asked by Trump whether “Sleepy Joe,” meaning Democratic nominee Joe Biden, could have achieved the same breakthrough with Sudan.

“Mr. President, one thing I can tell you is, we appreciate the help for peace from anyone in America,” Netanyahu offered after a pause.

Trump said “at least five” more countries are in line to normalize relations with Israel under U.S. auspices and boasted that the arrangements cost the United States nothing.

Secretary of State Mike Pompeo said Sudan’s civilian-led government had earned removal from the list and that it is in U.S. interests to help support the relatively new government succeed.

Netanyahu said the two countries would soon negotiate cooperative agreements in agriculture, trade and aviation, as Israel has begun to do with the UAE and Bahrain. “The skies of Sudan are open to Israel today. This allows for direct and shorter flights between Israel and Africa and South America,” he said.

The White House said the two countries would also seek to negotiate agreements on other economic issues, migration and “areas of mutual benefit.”

The deal, which comes less than two weeks before the U.S. election, has been carefully coordinated between the three countries in recent days. They sought to balance the White House desire to notch another diplomatic victory in the run-up to the vote and Sudan’s reported desire not to be seen as capitulating in exchange for favors from Washington.

the Associated Press reported on Thursday, citing Sudanese officials, that a joint U.S.-Israeli delegation traveled to the Sudanese capital Khartoum to wrap up the normalization deal in a meeting with Gen. Abdel-Fattah al-Burhan, military head of Sudan’s transitional government.

The statement issued Friday afternoon praised Sudan’s transitional government and did not mention the terror list issue, in apparent deference to the wishes of Sudan’s leaders to soften the public appearance of a quid pro quo.

Sudan, long seen as implacably hostile to Israel, could realize economic advantages from the twin developments of an accord with regional economic powerhouse Israel and the shedding of its pariah status as a state sponsor of terror.

“After decades of living under a brutal dictatorship, the people of Sudan are finally taking charge,” said a joint statement issued by the three countries. “The Sudanese transitional government has demonstrated its courage and commitment to combating terrorism, building its democratic institutions, and improving its relations with its neighbors.”

The statement said the leaders have agreed to “end the state of belligerence” between the two, although they have never fought a war.

Palestinian Authority President Mahmoud Abbas, who has fiercely opposed the spreading rapprochement between its regional allies and Israel, reacted to the Sudan development with equal displeasure.

“The Palestinian presidency affirms its condemnation and rejection of normalized relations with the Israeli occupation state that usurps the land of Palestine,” his office said, according to the to the official Palestinian news service. “This contradicts the decisions of the Arab summits, as well as the Arab peace initiatives approved by the Arab and Islamic summits and the UN Security Council.”

Netanyahu and other Israeli officials highlighted the symbolic reversal of what is known as the “Three Nos” issued by Arab governments meeting in Khartoum in 1967: No to peace with Israel; no to recognition of Israel; no to negotiations with Israel.

“Whereas today Khartoum says yes to peace with Israel, yes to recognition of Israel and to normalization with Israel,” Netanyahu said.

In a statement, the White House said, “We commend the transitional government of Sudan for its work to chart a new course and stand ready to support the people of Sudan as they work to build a better future for themselves and future generations.”

With the Sudanese public largely opposed to normalization of ties with Israel, the country’s unelected transitional government sought to have Trump sign the terror list paperwork first. The listing had imposed punitive sanctions on Sudan’s ability to make dollar transactions and receive aid and investment.

Hamdok has said any change in his country’s diplomatic status with Israel would have to go before a legislative body that does not now exist.

The rapprochement with Israel represents a major reversal from the Bashir era. For decades, Sudan was one of Israel’s staunchest opponents, and Bashir offered funding and arms to the Palestine Liberation Organization, Hamas and Hezbollah - part of the United States' reasoning for designating Sudan as a state sponsor of terrorism.