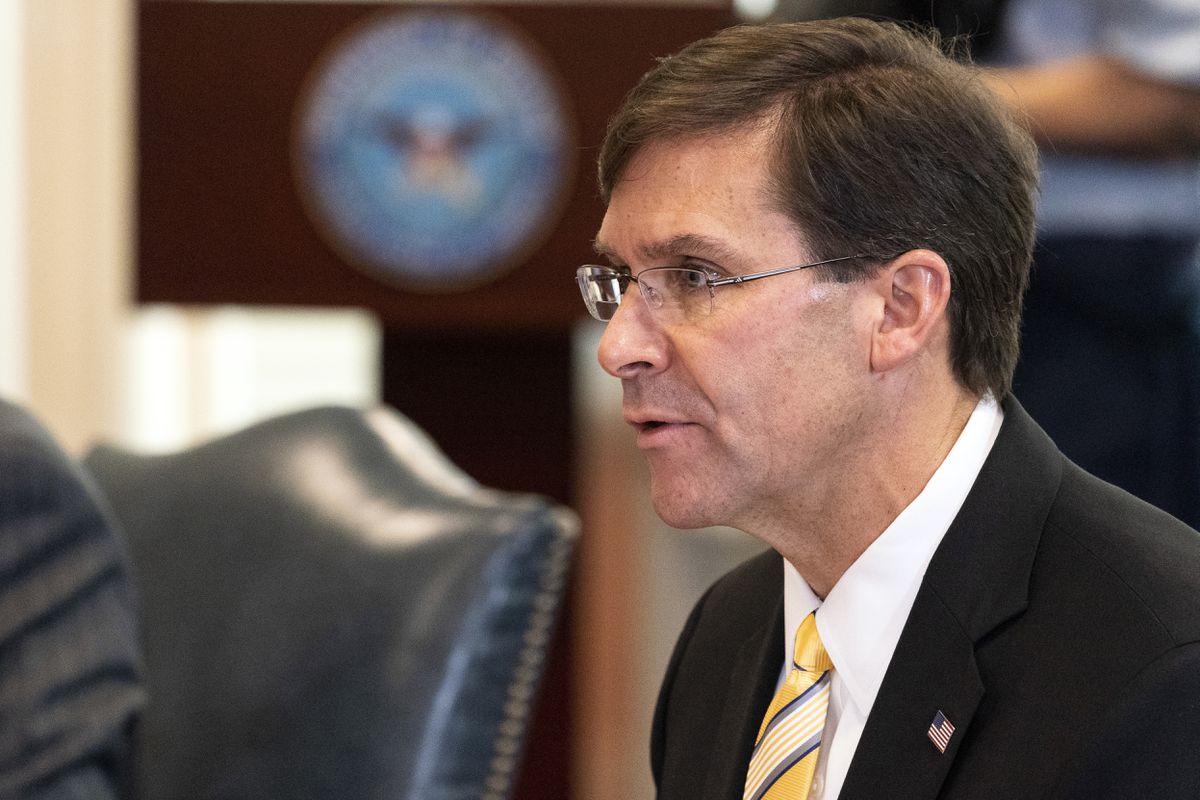 The decision was widely expected as Trump had grown increasingly unhappy with Esper over the summer, including sharp differences between them over the use of the military during the civil unrest in June. But the move could unsettle international allies and Pentagon leadership and injects another element of uncertainty to a rocky transition period as Joe Biden prepares to assume the presidency.

Presidents who win reelection often replace Cabinet members, including the secretary of defense, but losing presidents have kept their Pentagon chiefs in place until Inauguration Day to preserve stability in the name of national security.

“Chris will do a GREAT job!” Trump tweeted. “Mark Esper has been terminated. I would like to thank him for his service.”

U.S. defense officials said Miller arrived at the Pentagon in the early afternoon to take over the job, and that White House chief of staff Mark Meadows informed Esper of the firing before Trump announced the move on Twitter. Other top defense and Pentagon officials, however, were caught by surprise and learned of the decision through the media. The defense officials spoke on condition of anonymity to discuss internal matters.

Trump’s abrupt move to dump Esper triggers questions about what the president may try to do in the next few months before he leaves office, including adjustments in the presence of troops overseas or other national security changes.

The decision was quickly condemned by Democratic members of Congress.

“Dismissing politically appointed national security leaders during a transition is a destabilizing move that will only embolden our adversaries and put our country at greater risk,” said Rep. Adam Smith, D-Wash., chairman of the House Armed Services Committee. “President Trump’s decision to fire Secretary Esper out of spite is not just childish, it’s also reckless.”

Sen. Tim Kaine, D-Va., a member of the Senate Armed Services and Foreign Relations Committees, said firing Esper “in the last weeks of a lame duck Presidency serves no purpose and only demonstrates an instability harmful to American national defense.”

Former military leaders also weighed in. Jim Stavridis, a retired Navy admiral who served as a senior aide to Republican Donald Rumsfeld when Rumsfeld was defense secretary, wrote on Twitter that Esper’s firing made no sense.

“Things are already unstable internationally, and this does not help,” he wrote. “We need to try and create stability in transition time — hopefully opponents will not try and take advantage.”

Biden has not said who he would appoint as defense chief, but is widely rumored to be considering naming the first woman to the post — Michele Flournoy. Flournoy has served multiple times in the Pentagon, starting in the 1990s and most recently as the undersecretary of defense for policy from 2009 to 2012. She is well known on Capitol Hill as a moderate Democrat and is regarded among U.S. allies and partners as a steady hand who favors strong U.S. military cooperation abroad.

Miller has most recently served as the director of the National Counterterrorism Center and before that was a deputy assistant defense secretary and top adviser to Trump on counterterrorism issues. He has a long background with the military, having served as an enlisted infantryman in the Army Reserves and after that as a special forces officer. He also served in the wars in Afghanistan and Iraq. After his retirement from the military, Miller worked as a defense contractor.

Esper’s strained relationship with Trump came close to collapse last summer during civil unrest that triggered a debate within the administration over the proper role of the military in combating domestic unrest. Esper’s opposition to using active duty troops to help quell protests in Washington, D.C., infuriated Trump, and led to wide speculation that the defense chief was prepared to quit if faced with such an issue again.

During his roughly 16-month tenure, Esper generally supported Trump’s policies but more recently he was widely expected to quit or be ousted if Trump won reelection.

Presidents historically have put a high priority on stability at the Pentagon during political transitions. Since the creation of the Defense Department and the position of defense secretary in 1947, the only three presidents to lose election for a second term — Gerald Ford, Jimmy Carter and George H.W. Bush — all kept their secretary of defense in place until Inauguration Day.

Esper, who was the official successor to former Marine Gen. James Mattis, routinely emphasized the importance of keeping the military and the Defense Department out of politics. But it proved to be an uphill struggle as Trump alternately praised what he called “his generals” and denigrated top Pentagon leaders as war-mongers devoted to drumming up business for the defense industry.

Trump soured on his first defense secretary, Mattis, who resigned in December 2018 over Trump’s abrupt decision — later rescinded — to pull all U.S. troops out of Syria, and then on Esper. The splits reflected Trump’s fundamentally different views on America’s place in the world, the value of international defense alliances and the importance of shielding the military from domestic partisan politics.

During Trump’s tenure, the Pentagon has often been at the center of the tumult, caught in a persistent and erratic debate over the use of American forces at war in Iraq, Syria and Afghanistan, and on U.S. soil, at the Mexico border and in cities roiled by civil unrest and rocked by the coronavirus.

Esper’s departure has appeared inevitable ever since he publicly broke with Trump in June over the president’s push to deploy military troops in the streets of the nation’s capital in response to civil unrest following the police killing of George Floyd. Esper publicly opposed Trump’s threats to invoke the two-centuries-old Insurrection Act, which would allow the president to use active-duty troops in a law enforcement role. And Trump was furious when Esper told reporters the Insurrection Act should be invoked “only in the most urgent and dire of situations,” and, “We are not in one of those situations now.”

The June civil unrest initially drew Esper into controversy when he joined a Trump entourage that strolled from the White House to nearby St. John’s Episcopal Church for a photo op featuring Trump hoisting a Bible. Critics condemned Esper, saying he had allowed himself to be used as a political prop.

Esper said he didn’t know he was heading into a photo op, but thought he was going to view damage at the church and see National Guard troops in the area. He was accompanied by Gen. Mark Milley, chairman of the Joint Chiefs of Staff, who later expressed public regret at having been present in uniform.