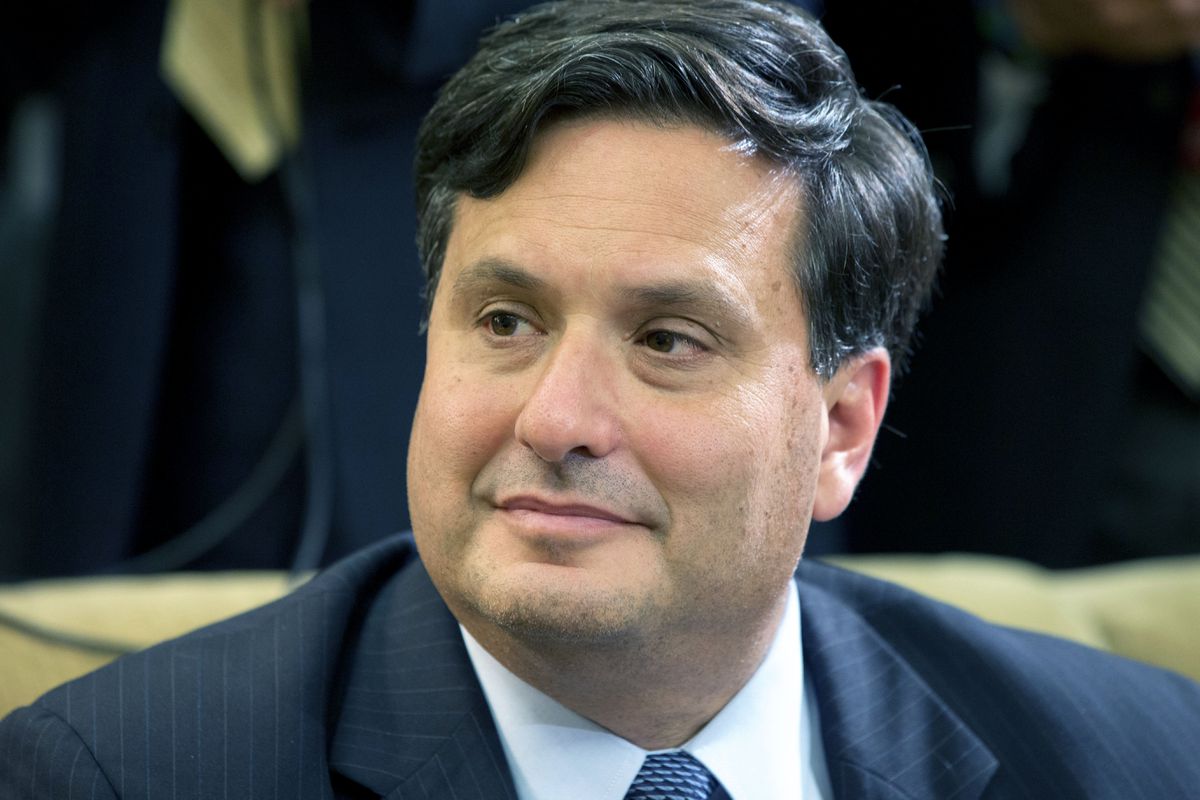 In this Wednesday, Oct. 22, 2014 file photo, Ebola coordinator Ron Klain listens as President Barack Obama speaks to the media about the government's Ebola response in the Oval Office of the White House in Washington. (AP Photo/Jacquelyn Martin, File)

In this Wednesday, Oct. 22, 2014 file photo, Ebola coordinator Ron Klain listens as President Barack Obama speaks to the media about the government's Ebola response in the Oval Office of the White House in Washington. (AP Photo/Jacquelyn Martin, File)

WASHINGTON — President-elect Joe Biden has chosen longtime Washington operative Ronald Klain as White House chief of staff, sending an early signal that he intends to rely heavily on experience, competence and political agility after a Donald Trump presidency that prized flashiness and personality.

Klain, 59, has been a senior adviser to Democratic presidents, vice presidents, candidates and senators. His appointment marks a homecoming of sorts, since Klain served in the late 1980s as a top aide to Biden when he was chairman of the Senate Judiciary Committee and ran Biden’s office when he first became vice president.

“Ron has been invaluable to me over the many years that we have worked together, including as we rescued the American economy from one of the worst downturns in our history in 2009 and later overcame a daunting public health emergency in 2014,” Biden said in a statement. “His deep, varied experience and capacity to work with people all across the political spectrum is precisely what I need in a White House chief of staff as we confront this moment of crisis and bring our country together again.”

A strategist with a legal mind and political ear, Klain is the sort of behind-the-scenes Washington hand more common in decades past, an operative who has managed everything from an Ebola outbreak to candidate debates to judicial confirmations.

“This town is brimming with smart people and high school valedictorians,” said Jared Bernstein, an economic adviser to Biden when he was vice president. “Ron brings something extra to the table, which is an ability to quickly process complex, conflicting streams of information and zero in on the optimal solution.”

Often called the second-hardest gig in Washington, the White House chief of staff holds what is traditionally the most important unelected position in government not subject to a Senate confirmation, a person who must wake the president in a crisis and decide who gets to be in the room to shape his views.

The job has often gone to the most talented advisers in both parties - people such as Republican James Baker and Democrat Leon Panetta. Under President Trump, however, the role of the chief of staff has shifted, with the position falling to officials with strained relations and limited sway with Trump. Bucking convention, Trump’s son-in-law, White House senior adviser Jared Kushner, established an independent locus of power inside the West Wing.

Choosing Klain reflects Biden’s plan to move beyond that chaos-driven presidency. The internal White House structure will probably revert to form, with a single manager in charge surrounded by senior officials who also have direct relationships with the president. Mike Donilon, who helped write Biden’s campaign strategy, and Steve Ricchetti, the campaign chairman, are well positioned to land influential positions inside the White House, according to people with knowledge of the internal dynamics who spoke on the condition of anonymity to recount private conversations.

Many in Biden’s orbit have long seen Klain as the most obvious pick for chief of staff after more than 30 years of background roles. After a falling-out with Biden’s team when he offered early support to Hillary Clinton’s 2016 presidential bid, Klain has worked his way back into the upper echelons of Biden’s trusted circle.

He consulted with Biden on general strategy even before the former vice president announced his presidential campaign last year, and since August he has served as an unpaid senior adviser to the campaign and led Biden’s extensive debate preparation.

“He is the logical choice and brings the complete package - universally acknowledged ability, a broad range of experience, chemistry with the president-elect - and he is a strategic thinker that brings results,” said Pete Rouse, who was a top aide to President Barack Obama.

At times Klain appears to have worked with every Democratic leader of the past three decades. As counsel to the Judiciary Committee, Klain advised then-Sen. Biden during Clarence Thomas’s volatile Supreme Court confirmation hearings. He worked in the Bill Clinton White House to confirm Ruth Bader Ginsburg to the Supreme Court, served as chief of staff to Attorney General Janet Reno and was a top policy aide to Senate Minority Leader Tom Daschle, D-S.D.

Klain also served as chief of staff to Vice President Al Gore and led Gore’s legal efforts to force a recount of Florida ballots after the 2000 election - actor Kevin Spacey played him in the 2008 movie “Recount.”

Along the way, Klain has developed a specialized role as the Democrats' preeminent coach for presidential debates. He worked on debate preparations for Bill Clinton in 1992 and Gore in 2000, and he has led the debate prep for every Democratic nominee since - John Kerry, Obama, Hillary Clinton and Biden.

Klain’s debate rules for candidates, versions of which long ago became public, have been a mainstay of both party’s strategies for these presidential matchups. “Write your ‘dream’ post-debate headline,” one bullet point says. “Dress so no one will talk about it,” says another.

“A stumble, fumble, or gaffe can cost you a debate, right up to the last second,” he wrote in one memo that became public. “But while you can lose a debate at any point, you can only win a debate in the first twenty minutes.”

But it is Klain’s experience battling both a recession and a pandemic that could come most quickly into play as Biden confronts the nation’s crises. “He knows Biden and he is loyal to Biden, and he absolutely has Biden’s trust,” Dunn said. “There is no one who works harder than Ron, whether it is on a debate book or covid policy.”

As Biden’s vice-presidential chief of staff, Klain oversaw the $787 billion American Recovery and Reinvestment Act, a stimulus package that helped ward off a deeper recession after the 2008 economic collapse.

Klain was considered for White House chief of staff during Obama’s second term. That job ultimately went to Denis McDonough, a longtime Obama policy adviser, after Klain withdrew from consideration for personal reasons.

But he returned to the White House to become the point man for the administration’s response to the Ebola outbreak, which has now made him one of the Democratic Party’s go-to experts for responding to the coronavirus.

“It’s hard to prove a counterfactual, but I believe that Ron Klain is the reason we did not have an Ebola epidemic in the United States,” said Valerie Jarrett, a former senior adviser to Obama. “He is well respected by all the people with whom I have worked.”

When Klain was chief Democratic counsel of the Senate Judiciary Committee, Sen. Christopher Coons, D-Del., served as an intern there. About a quarter century later, they worked together again on the U.S. response to Ebola. “Ron Klain brought focus, professionalism, no drama, high competency to our Ebola response,” said Coons, who led the Senate Foreign Relations subcommittee on Africa.

But Klain has not escaped the friction that is a constant at the highest reaches of government. He resigned as chief of staff to Gore in 1999, in the middle of Gore’s presidential campaign, after it emerged that he was in the room with President Bill Clinton when the president called a reporter for a story about the Gore campaign’s struggles.

Clinton had been seeking to convey to the reporter that Gore’s campaign was now doing well after initial stumbles. But Gore was furious at the implicit criticism in that message and at Clinton for delivering it.

Klain said he had opposed Clinton’s call, but the fallout only deepened divisions between the campaign and the vice president’s White House team. Klain left his job about a month later and was hired back into Gore’s team only after a shake-up in the senior campaign leadership.

More recently, Klain infuriated some in Biden’s inner circle by signing up to advise Hillary Clinton’s presidential campaign before Biden, who was mourning his son Beau’s death from cancer, had decided to take a pass on the race. Klain helped prepare Clinton for her first debate against Sen. Bernie Sanders, I-Vt., which took place days before Biden announced he would not run.

After the campaign, Ricchetti, who also served as chief of staff to Biden in the vice president’s office, arranged for a meeting between Klain and Biden to clear any lingering bad feelings, according to people familiar with the matter.

“Ron’s value is that Biden trusts him completely and Ron has no fear of telling him exactly what he thinks,” said Jay Carney, a former White House press secretary whom Klain hired previously to work for Biden. “He does it respectfully and bluntly, which is what Biden wants and expects.”

Klain also has private-sector experience, which he got after leaving the Gore campaign. He became a litigator and registered lobbyist from 2001 to 2004, working out of the law firm O’Melveny & Myers for a range of clients, including AOL Time Warner and the federal mortgage giant Fannie Mae.

He then went to work for Revolution, a firm that has invested in companies such as Sweetgreen, Cotopaxi and DraftKings. The company was started by Steve Case, the co-founder of AOL.

Klain is married to Monica Medina, an environmental policy consultant who previously held positions at the Defense Department and the National Oceanic and Atmospheric Administration.