At airports, coronavirus tests are taking off 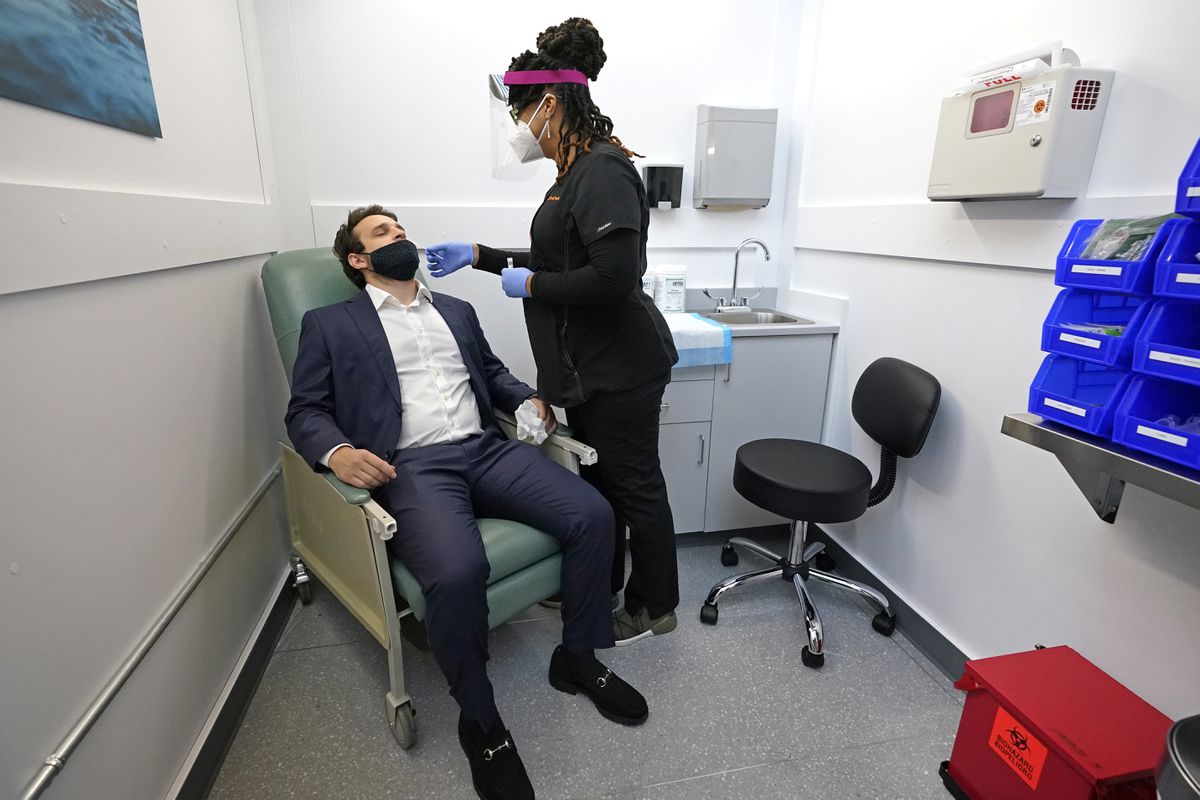 Medical Assistant Aneka Gopaulsingh administers a swab to Julian Bernstein at the new XpresCheck COVID-19 testing facility at Boston Logan International Airport, Wednesday, Oct. 28, 2020, in Boston. The testing site is open for airport and airline employees, and will open to passengers and the general public in mid-November. (AP Photo/Elise Amendola)

Medical Assistant Aneka Gopaulsingh administers a swab to Julian Bernstein at the new XpresCheck COVID-19 testing facility at Boston Logan International Airport, Wednesday, Oct. 28, 2020, in Boston. The testing site is open for airport and airline employees, and will open to passengers and the general public in mid-November. (AP Photo/Elise Amendola)

The negative coronavirus test result is becoming the passport of Pandemic 2020. Many countries and states are requiring visitors to carry proof of a negative test. Without it, travelers may be denied entry or required to self-quarantine for up to two weeks. Some destinations, such as Alaska, are also encouraging a second test post-arrival. And one state - New York - is demanding it: Starting last week, out-of-towners from affected states must undergo a test on the fourth day of their visit.

Testing has become more ubiquitous, but the clinics may not always be convenient. Plus, for travelers with an impending trip, timing is critical: Some governments will only accept tests administered within 72 hours of departure. To make testing easier for travelers, a few airlines, such as United, have established airport clinics for passengers booked on specific routes, such San Francisco to Hawaii and New Jersey’s Newark Liberty International to London Heathrow. Some airports are also opening testing sites. While a few are available only to airline and airport personnel, such as San Francisco International, many are welcoming the general public. The clinics that are open to everyone are pre-security.

If you are considering getting a coronavirus test at an airport, some pre-swab prep is required, starting with checking the travel requirements of your destination. Here is what you need to know:

Q: Is it safe to get a test at an airport rather than a medical facility?

A: For the most part, yes. Jason Farley, a professor and nurse practitioner in the division of infectious diseases at the Johns Hopkins University Schools of Nursing and Medicine, said the best setting is outdoors. LaGuardia, for example, set up its clinic on the first floor of the Terminal B parking garage, and Oakland created a drive-through station at its North Field terminal complex. Visitors use a walk-up window near Burlington’s cell phone lot. If the testing site is indoors, Farley said the private partitioned rooms should have a high ceiling or open roof, plus a hospital-grade air filtration system. The medical staff should be wearing appropriate personal protective equipment, and patients should keep their masks on at all times, only lowering them to half-mast for the swab.

[Planning a warm-weather getaway? Here’s a rundown of Hawaii’s COVID-19 requirements for travelers]

Q: Who is administering and processing the tests?

A: The airports have partnered with certified labs and commercial vendors, who have hired health-care workers including nurse practitioners and medical assistants. Tampa, for example, teamed up with BayCare Health System. The Port Authority of New York and New Jersey is working with NYC Health & Hospitals' Test and Trace Corps. Bradley has signed on with Genesys Diagnostics. CityHealth Urgent Care is overseeing Oakland’s program, and Garnet is assisting Burlington.

Q: What kind of tests are available?

A: Most are offering the polymerase chain reaction (PCR) test, which the medical community considers highly accurate. (Doug Satzman, chief executive of XpresSpa, which runs XpresCheck, calls it “the gold standard.”) Tampa is also administering the rapid antigen test, which BayCare’s website says “can provide peace of mind for travelers wanting to be sure they aren’t infectious” but warns that it may not excuse you from a locale’s mandatory quarantine. XpresCheck has three types of tests: PCR; blood antibody, which helps determine whether you had covid; and rapid molecular test. Oakland only provides the rapid test. Be aware that some states and countries do not accept this test, which is not as precise as the PCR.

Q: How long does it take to receive the results?

A: Results for PCR and antibody tests typically take 48 to 72 hours but could take longer depending on the lab or volume of patients. As its name suggests, rapid is much speedier, at 15 minutes or less. The Tampa airport recommends taking the PCR three days before your departure. If you plan to fly, Farley suggests taking the PCR a few days before your trip and a rapid test on the day of your flight.

Q: How does payment work?

A: Testing at the Port Authority’s LaGuardia site - and its future JFK spot - is free, even if you don’t have insurance. It is also gratis at Oakland. The other airports charge, though some, such as XpresCheck, will bill your insurance company directly, with no co-pay required. Out-of-pocket expenses vary. For example, Bradley charges $150 for the PCR. At Tampa, you will pay $150 for the PCR and $60 for the antigen test. Burlington’s tests cost $15o for the rapid and $175 for the PCR. If you don’t have insurance, XpresCheck’s fee is $75 for the PCR or $90 for the PCR and antibody test, plus $50 to $100 in external lab fees. For the rapid test, you must pay the $200 up front, since some insurance companies may not cover this test. In Alaska, the price is $250 for nonresidents; Alaskans are not charged. Make sure to contact your medical insurer in advance and ask about coverage. Also retain your receipt for reimbursement.

Q: What do I need to bring to the appointment?

A: A photo ID, medical insurance card and, at some airports (Bradley and Tampa, for instance), proof of travel, such as your boarding pass or flight itinerary.

Q: How much time should I allow for the entire appointment?

A: The test itself is quick, but you need to leave time for waiting in line, reviewing the paperwork and paying or submitting your insurance information. Satzman said to set aside 45 minutes to an hour, but if you are trying to catch a plane, considering bumping it up to 90 minutes.

Q: Do I need to make an appointment, or do the sites accept walk-ups?

A: Some of the venues take walk-ups, such as Tampa and LaGuardia; others have an online appointment system, such as Oakland. XpresCheck offers both.

Q: How busy are these testing sites?

A: Tampa has tested more than 4,100 passengers since opening on Oct. 1. LaGuardia is handling about 100 a people a day and has the capacity to process 400 tests. About 300 to 400 people per day are showing up at Oakland’s site. Satzman said XpresCheck has processed thousands of people since launching its first facility in June. Bradley performs about 200 tests a day, and on a recent Wednesday, Burlington’s clinic had assisted nearly 70 people between 8 a.m. and lunchtime.

Q: How do I receive my results?

A: By email, text, phone call or secure portal for the PCR and antibody results. For rapid testing, you can wait if you have the time. If not, they will contact you electronically with the results.

Q: What happens if I test positive?

A: The medical facilities are required by law to share all positive results with the appropriate agency or authority. Satzman said his staff reports positive results from the rapid test to the local Centers for Disease Control and Prevention office, which will place the name of the infected patient on the “do not fly” list. If you attempt to travel, he said, you will be stopped by a Transportation Security Administration official or an airline agent at the gate. At LaGuardia, the NYC Test & Trace Corps said it will “call to discuss health monitoring, ask about your recent contacts and offer resources to safely separate, such as a free hotel room.” BayCare, Tampa’s medical provider, alerts the Florida Department of Health, and Genesys Diagnostics notifies the Connecticut Department of Public Health. Vermont’s Garnet will contact the state health department and call the individual to recommend a PCR, to make sure the rapid test result was not a false positive. The clinics can’t detain you, but you should cancel all travel plans and self-isolate as soon as possible.

A: I recently booked a 2:20 appointment on a Tuesday afternoon with XpresCheck in Newark. I found the facility easily: It was in Terminal B on the third level, in a corner near the check-in desks of several international airlines. Seven people were ahead of me in line, including an airport employee and a couple flying internationally two days later. A man in a tie informed us that they were running about 15 minutes behind. About 20 minutes later, I informed a nurse that I had a train to catch and would have to leave the terminal at 3:30. A few minutes later, she returned and pulled me out of line, ahead of the couple with the Thursday flight. I entered a private room without a roof and signed several privacy and consent forms. She asked me which test I wanted. I asked for a PCR and rapid; she said I would have to pick one. I chose rapid. I pulled my mask down partway and tilted my head back. She used a swab to collect a sample from my nose, then escorted me back to the waiting area. She reappeared with my receipt and, a few minutes later, my results.

A: The trend is in its infancy, but Satzman expects the concept to take off. He recently unveiled the third XpresClinic, at Boston Logan, and plans to expand. “Medical clinics are not common in airports,” he said, “but I think they will become a staple in airports.”