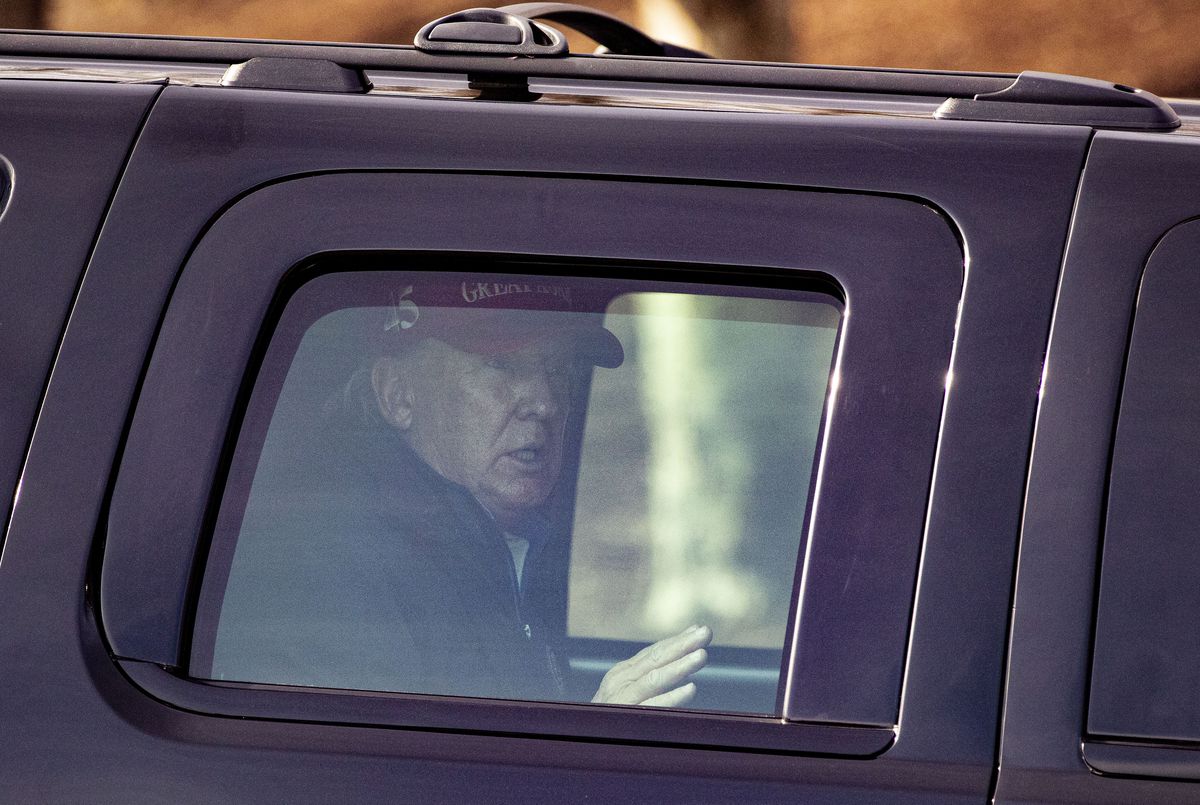 President Trump, pictured above arriving at Trump National Golf Club on Saturday, Nov. 14, 2020, in Sterling, Va. Republican strategists are concerned the president could be a burden during the runoffs. Photo by Al Drago for The Washington Post

President Trump, pictured above arriving at Trump National Golf Club on Saturday, Nov. 14, 2020, in Sterling, Va. Republican strategists are concerned the president could be a burden during the runoffs. Photo by Al Drago for The Washington Post

Republican leaders are increasingly alarmed about the party’s ability to stave off Democratic challengers in Georgia’s two Senate runoff elections - and they privately described President Donald Trump on a recent conference call as a political burden who despite his false claims of victory was the likely loser of the 2020 election.

Those blunt assessments, which capture a Republican Party in turmoil as Trump refuses to concede to President-elect Joe Biden, were made on a Nov. 10 call with donors hosted by the National Republican Senatorial Committee. It featured Georgia’s embattled GOP incumbents, Sens. David Perdue and Kelly Loeffler, and Karl Rove, a veteran strategist who is coordinating fundraising for the Jan. 5 runoffs.

The comments by the senators and Rove were shared with The Washington Post by a person who provided a detailed and precise account of what was said by each speaker on the call. The person spoke on the condition of anonymity since they were not authorized to divulge the contents of the private discussion.

Most striking was the way the senators nodded toward the likelihood of Biden’s presidency. While Trump keeps insisting that he won the election, making baseless claims of voter fraud and mounting legal challenges, Republicans on the call privately cast those efforts as an understandable but potentially futile protest.

“What we’re going to have to do is make sure we get all the votes out from the general and get them back out,” Perdue said of core Republican voters. “That’s always a hard thing to do in a presidential year, particularly this year, given that President Trump, it looks like now, may not be able to hold out.”

Perdue added that “we don’t know that” yet - and said he fully supports Trump and his dispute of the results in several states. But, he said, “we’re assuming that we’re going to be standing out here alone. And that means that we have to get the vote out, no matter what the outcome of that adjudication is on the recount in two states and some lawsuits, and others. Kelly and I can’t wait for that.”

Perdue noted later that he had confronted an “anti-Trump vote in Georgia” in the first round of voting and said the runoff is about getting “enough conservative Republicans out to vote” in the Atlanta suburbs and elsewhere who might have opposed the president’s reelection.

“I’m talking about people that may have voted for Biden but now may come back and vote for us because there was an anti-Trump vote in Georgia,” Perdue said. “And we think some of those people, particularly in the suburbs, may come back to us. And I’m hopeful of that.”

Perdue’s delicate approach - standing with Trump, but also privately acknowledging that the president’s time in power could be waning and that he carries possible political liabilities - extended to others on the call who tried to balance their loyalty to Trump with their apprehension about what is needed in Georgia to save the GOP Senate majority. It is revealing of the Republican dilemma in the winter of Trump’s presidency, with fear of offending him and his fervent supporters hovering over a cold political reality.

“In fact, I’m assuming the worst. I’m assuming the worst but hoping for the best. And the worst-case scenario is that we have a Democrat in the White House, that we have Nancy Pelosi still with her hands on that speaker’s gavel, which appears almost a certainty,” Sen. Todd Young, R-Ind., who recently chaired the National Republican Senatorial Committee, said on the call, as he spoke urgently of the need to win in Georgia.

Those remarks came as Perdue and Loeffler have remained publicly defiant about the 2020 election result in their state. Biden won Georgia by about 14,000 votes - the first time a Democratic presidential candidate has won there since 1992 - and a hand recount is underway. Both senators have called for Georgia Secretary of State Brad Raffensperger, a Republican, to resign for failing to be “transparent,” channeling voter anger but not citing anything that he might have done wrong.

The GOP fretting also comes as Trump flails and as Democrats, with a caucus of 48 senators so far, see one last chance to reclaim the Senate majority by trying to secure a double victory in what used to be a conservative Republican stronghold. If they’re successful, the 50-50 Senate would tilt to the Democrats once Vice President-elect Kamala Harris is sworn in next year.

The private GOP phone call highlighted the party’s rising angst over the highly unusual dual runoff campaign, which is unfolding under the cloud of the Georgia presidential recount and Trump’s refusal to concede, while at the same time Democrats appear energized and emboldened by Biden’s win in the state.

Some on the call expressed particular concern about Georgia’s fast-changing electorate, driven by the increasingly liberal metro Atlanta region and the push by 2018 gubernatorial candidate Stacey Abrams to register more Democratic voters, especially in the state’s communities of color.

Democrats hope that the candidate challenging Loeffler in the runoff, the Rev. Raphael Warnock - the pastor at Atlanta’s iconic Ebenezer Baptist Church, where the Rev. Martin Luther King Jr. once preached - will help energize Black voters.

“They changed, dramatically, the face of the electorate in Georgia. Many of these new voters are from California, Illinois, New York, New Jersey, and they’re not of the conservative persuasion,” Perdue said on the call.

Loeffler and Perdue laid bare their strategies for the closing weeks, with an emphasis on making incendiary attacks on the Democrats and rallying the GOP base in Georgia, which is majority White.

“This is really not about messaging. It’s not about persuasion in my race. It’s more about getting the vote out,” Perdue said. He later said: “We have to remind people of what the Democrats will do. It has nothing to do with Kelly or me.”

Loeffler was optimistic that Trump’s voters would come out again and rally behind the GOP, but she said the party can’t “take for granted” that the president’s coalition will reassemble at Election Day levels.

“We think that Trump voters are going to continue to be very energized, and we don’t think we’ll have a problem with that,” Loeffler said. “But the question is about the Democrat turnout. We don’t know. We can’t take for granted that we’re going to keep everyone motivated.”

A spokesman for the National Republican Senatorial Committee declined to comment, and Rove was unavailable. A Senate GOP campaign official, who spoke about private discussions on the condition of anonymity, said the urgent tone of the call was unsurprising. “On calls with donors you usually talk about worst-case scenarios,” the official said.

A spokesman for Loeffler, Stephen Lawson, said the senator is confident about her campaign. Perdue spokesman John Burke said of the conference call, “This isn’t news, there’s nothing new here.”

“As we have said from the beginning, this runoff is all about turnout. Senator Perdue has been President Trump’s strongest ally in the Senate, and we’re proud to have his support in this race,” Burke added.

All four runoff campaigns, and their various outside supporters, are seeking to nationalize the contests and focus their messaging on the impact that victories could have for each side, with Democrats trying to achieve a historically high Black turnout normally associated with a presidential race. Republicans are painting the races as critical to securing the GOP majority and shoring up a conservative bulwark against Democrats with Biden’s presidency looming.

“We’ve got to pile on big time,” Rove said on the call as he urged donors to quickly organize and bundle cash for the runoffs. He also warned them that Democratic billionaire Mike Bloomberg, the former New York mayor, “is going to drop, you know, 20 million dollars on our head.”

While Bloomberg was a prolific Democratic donor during the 2020 campaign, he has not signaled his plans for Georgia. A Bloomberg adviser declined to comment.

Warnock, seeking to become the first elected Black Democratic senator from the Deep South, faces Loeffler in a contest that was long expected to go to a runoff because it is a special election to fill the rest of the term won four years ago by Republican Johnny Isakson. Loeffler was appointed to the seat after Isakson resigned for health reasons at the end of last year.

Rove said Republicans must pay close attention to Abrams and make sure GOP voters will show up in January.

“We’re going to have a big issue with mail-in ballots that Stacey Abrams has been working for years. Her apparatus is already geared up,” Rove said.

Warnock faces a bruising negative campaign from Loeffler, who previewed her strategy on the call. Among the lines of attack, she said, would be his past praise of the Rev. Jeremiah Wright, who had been Barack Obama’s pastor in Chicago; his criticism of police; and a visit in the 1990s by Cuban dictator Fidel Castro to a church where Warnock worked.

“He really escaped unscathed. . . . And we’re going to show everyone who he is,” Loeffler said.

PolitiFact, a nonpartisan fact-checking news organization, has concluded that Warnock was “the youth pastor at a New York City church when Castro spoke there in 1995” but “found no evidence that Warnock celebrated or welcomed Castro or that he was involved in arranging his appearance.”

“Get ready, Georgia, the negative ads are coming. Kelly Loeffler doesn’t want to talk about why she’s for getting rid of health care in the middle of a pandemic. So she’s going to try to scare you with lies about me,” Warnock said in a recent video to try to preempt the barrage of negative ads heading toward him.

Few states embody the forces charging the country’s political and social debates the way Georgia does. It was there that Ahmaud Arbery, an unarmed Black jogger, was fatally shot by a White former police officer, fueling months of nationwide street protests.

Georgia was also where the first open supporter of the baseless QAnon conspiracy theory, Marjorie Taylor Greene, won a seat in Congress. Greene has made offensive statements at a time when many Black Americans think the GOP has become more hospitable to white supremacists.

In general, the state’s political geography is a microcosm of the nation’s political landscape. Trump was propelled in Georgia, as he was across the country, by strong support from White and rural voters, while Biden performed strongly among suburban voters and with Black Americans and city dwellers.

Perdue noted on the call that he and Loeffler are effectively running as a ticket, having “fully integrated our teams” and locked arms on fundraising. That new joint committee, called the Georgia Battleground Fund, was encouraged by Senate Majority Leader Mitch McConnell, R-Ky., and organized the call. It also enlisted Rove to serve as its finance chair, a move first reported by Politico.

The Washington Post’s Paul Kane and David Weigel contributed to this report.