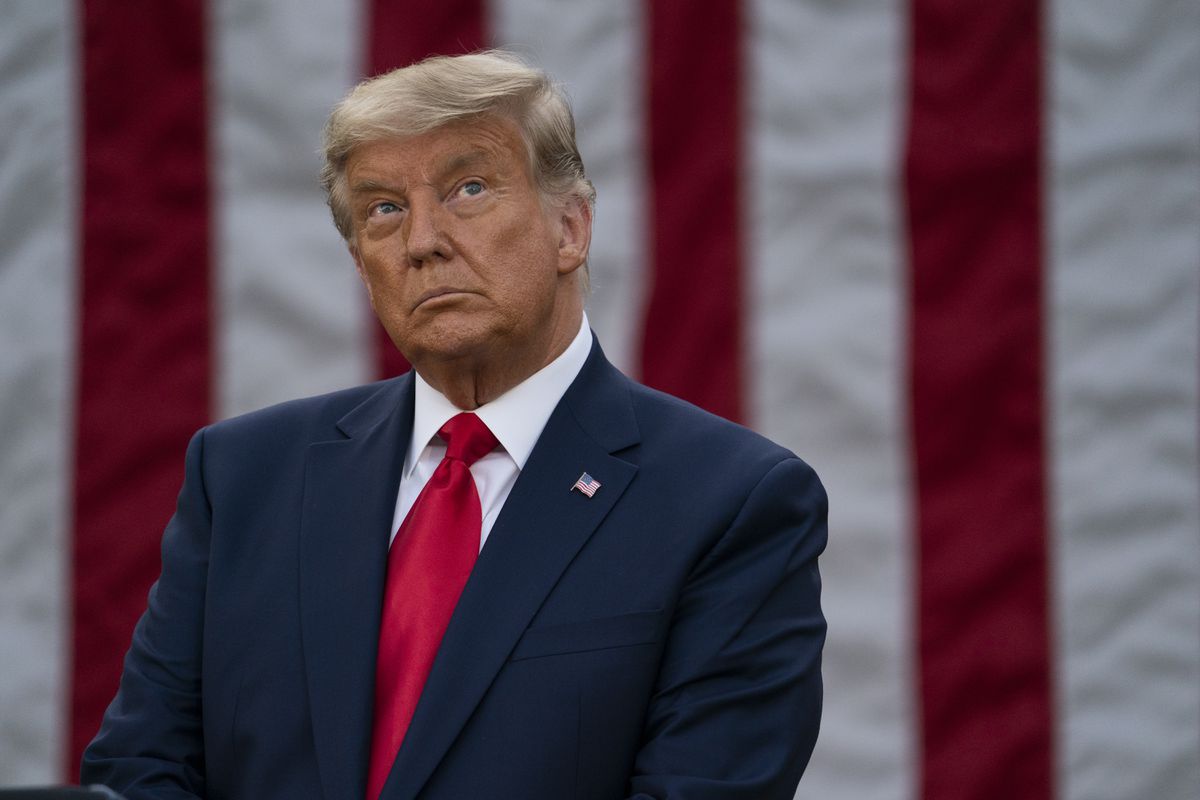 WASHINGTON - President Donald Trump began his third straight week of angry defiance of the election results, brooding behind the scenes about the state of his campaign’s legal challenges and of Georgia’s hand recount while refusing the pleas of some advisers to commit to a peaceful transfer of power.

Despite mounting legal losses in courts and a retreat by his attorneys in a federal case filed against Pennsylvania election officials, Trump dug in on his false claim that he “won” the election.

The president also assailed Georgia for what he described on Twitter as a “Fake” and “MEANINGLESS” recount in that state, which President-elect Joe Biden leads by 14,205 votes and has been projected to win. Trump officials seized late Monday on the discovery of about 2,600 eligible votes in heavily Republican Floyd County that were not included in initial tallies, although they would not be enough to change the outcome statewide.

Georgia’s Republican secretary of state, Brad Raffensperger, said in an interview Monday that he has come under increasing pressure from fellow Republicans to toss legally cast absentee ballots in an effort to reverse Trump’s narrow loss and that the president’s misinformation campaign has gotten so out of hand that he has received death threats.

Trump’s campaign has begun winding down its operations, with employment contracts for a number of aides expiring on Sunday. The president, frustrated that his campaign lawyers were not appearing more frequently on television to amplify his baseless claim that he was the real election winner, has elevated attorneys Rudy Giuliani and Jenna Ellis to run his legal and public-relations efforts to overturn the results.

Some of Trump’s advisers have encouraged him to permit the Biden transition operation to officially begin its work and to commit to a peaceful transfer of power, even if he is not yet ready to concede.

But the president - who is actively talking about running for president again in four years - has refused those entreaties, arguing that he thinks his core supporters want to see him “keep fighting,” according to one of these advisers, who like some others interviewed for this story spoke on the condition of anonymity to reveal private deliberations.

“He is more dug into his position than he was at the beginning,” this adviser said. “He thinks this is his base for 2024, and that half the country are warriors fighting for him, and that he’s got to keep fighting.”

Referring to Trump’s circle of close advisers, this person added, “All of his people are despondent.”

Ellis, a senior legal adviser for the Trump campaign, expressed confidence that the legal challenges will prevail in enough states to reverse the outcome of the election.

“The president owes it to all Americans to ensure that our elections are free, fair, safe and secure,” Ellis said in a statement. “There are legal avenues to pursue that achieve that goal, and when we are successful, we believe the president will be reelected. Every American should agree that all legal votes should be counted and all illegal votes should not be.”

But the campaign lawyer’s public optimism belies the private doubts many in Trump’s orbit have about the likelihood of a changed result. That recognition seemed to be reflected in remarks made by national security adviser Robert O’Brien at the Global Security Forum broadcast on Monday.

“If the Biden-Harris ticket is determined to be the winner - and, obviously, things look that way now - we’ll have a very professional transition with the National Security Council, no doubt about it,” O’Brien said.

As the Trump campaign’s losses mount in courts, some of the president’s more conspiratorial and polarizing advisers have become ascendant. In a meeting Friday, Giuliani told Trump that his advisers had been lying to him about his odds of prevailing and that he actually could win, a person with knowledge of the meeting said.

Since then, Giuliani has taken over strategic decisions on lawsuits as well as the public relations effort. “It’s really more of a public relations fight now than a legal one,” one campaign official said.

Giuliani has demanded that additional lawsuits be filed across the country, two advisers said. He did not immediately respond to a request for comment.

Also further empowered is Ellis, who showed up at the campaign’s headquarters over the weekend and signaled to others she would be taking a leading role in the effort, two officials said.

Ellis is viewed as an uncontrollable figure inside the campaign who often provided Trump with questionable information about alleged voter fraud and appeared on television without asking for approval from campaign officials, multiple aides said. She recently dubbed herself “President-Elect Jenna Ellis” on Twitter, which invited private derision from some of her colleagues.

Giuliani, Ellis and others, including Trump campaign lawyer Sidney Powell, have embraced more extreme conspiracy theories, including the debunked claim that Dominion Voting Systems, the Colorado-based manufacturer of voting machines for some states, deleted Trump votes. Others on the campaign, such as deputy campaign manager Justin Clark, do not believe those theories, according to two Trump advisers.

Trump has become personally obsessed with the baseless Dominion claims and has asked campaign officials as well as national security officials in the government about the company, the advisers said.

Vice President Mike Pence, meanwhile, is looking to participate in other activities over the next two months, including perhaps events touting the development of coronavirus vaccines, according to a person close to him.

In Georgia, Raffensperger said in a wide-ranging interview Monday that he has come under increasing pressure, including from Sen. Lindsey Graham, R-S.C., to toss out legally cast absentee ballots in an effort to reverse Trump’s narrow loss in the state.

Raffensperger said that both he and his wife, Tricia, have received death threats in recent days, including a text to him that read, “You better not botch this recount. Your life depends on it.”

Raffensperger said he reported the threats to state authorities.

“Other than getting you angry, it’s also very disillusioning,” Raffensperger said of the threats, “particularly when it comes from people on my side of the aisle. Everyone that is working on this needs to elevate their speech. We need to be thoughtful and careful about what we say.”

Raffensperger said he assumed Graham was working on behalf of the Trump campaign, if not directly with the president, and said he was stunned that Graham would seemingly suggest that he find a way to toss legally cast ballots.

“It sure looked like he was wanting to go down that road,” he said.

In an interview on Capitol Hill on Monday evening, Graham denied that he had suggested that Raffensperger toss legal ballots, calling that characterization “ridiculous.”

In Georgia and elsewhere, the Trump campaign’s legal options appear to be dwindling two weeks after the Nov. 3 election, according to legal experts.

“There’s nothing that’s currently pending in the system that has any chance of being remotely successful,” said Neal Katyal, who runs the Supreme Court practice at Hogan Lovells and served as acting solicitor general in the Obama administration.

Katyal added, “Legally speaking, all of these court cases are a joke, and it’s a travesty that Trump is pushing them and insinuating this stuff about the elections.”

Last week, a Michigan judge rejected a request from GOP poll watchers to delay certification of that state’s vote. The GOP plaintiffs, who had cited alleged problems with ballot-counting in Detroit, appealed - saying that a court had to act before the county certification deadline Tuesday - but on Monday Michigan’s Court of Appeals ruled against them.

On Sunday, Trump’s attorneys scrapped a significant part of a federal lawsuit that they launched last week against Pennsylvania election officials. The president’s team filed a revised version of their lawsuit, removing several legal claims based on allegations that GOP observers were not allowed to watch more than 680,000 votes being counted.

But several senior Trump advisers, including Giuliani and Jason Miller, then spent Sunday evening falsely claiming on social media that the campaign had done no such thing. Giuliani upbraided reporters from The Washington Post and other news outlets who had reported accurately on the pared-down lawsuit, which asks U.S. District Court Judge Matthew Brann to block certification of the state’s election results.

The Trump advisers were joined on Monday by the president himself, who dismissed the reports as “fake news” and said in tweets that the issue of the count observers remained “a very big deal in the complaint” and “a big part of our case” in Pennsylvania.

In fact, all three counts in the lawsuit that dealt with the count observers were deleted in the revised version, along with a request to block results containing ballots that observers hadn’t been able to watch. Only aimless gripes over the observation process in an introductory section survived the cull.

Attorneys for Pennsylvania Secretary of State Kathy Boockvar said in a court filing on Monday that these “stray allegations” about the observers had “no bearing on” the lawsuit’s actual legal action, which is now limited to a dispute over Democratic-leaning counties allowing voters to fix errors in their mail ballots. Some counties have said that only dozens of votes are at stake in this dispute.

Tim Murtaugh, the Trump campaign’s communications director, told The Post late on Sunday that even though the counts on observers had been removed, the campaign had “preserved our rights to make these arguments” later in the case. But on Monday, Murtaugh said on Twitter that reports about the lawsuit’s overhaul were “a complete mischaracterization.” An unattributed statement posted to the Trump campaign’s website later on Monday said that it had “strategically decided to restructure” its lawsuit.

Murtaugh did not respond to an email asking him to identify any alleged errors in The Post’s story.

The Washington Post’s David A. Fahrenthold contributed to this report.