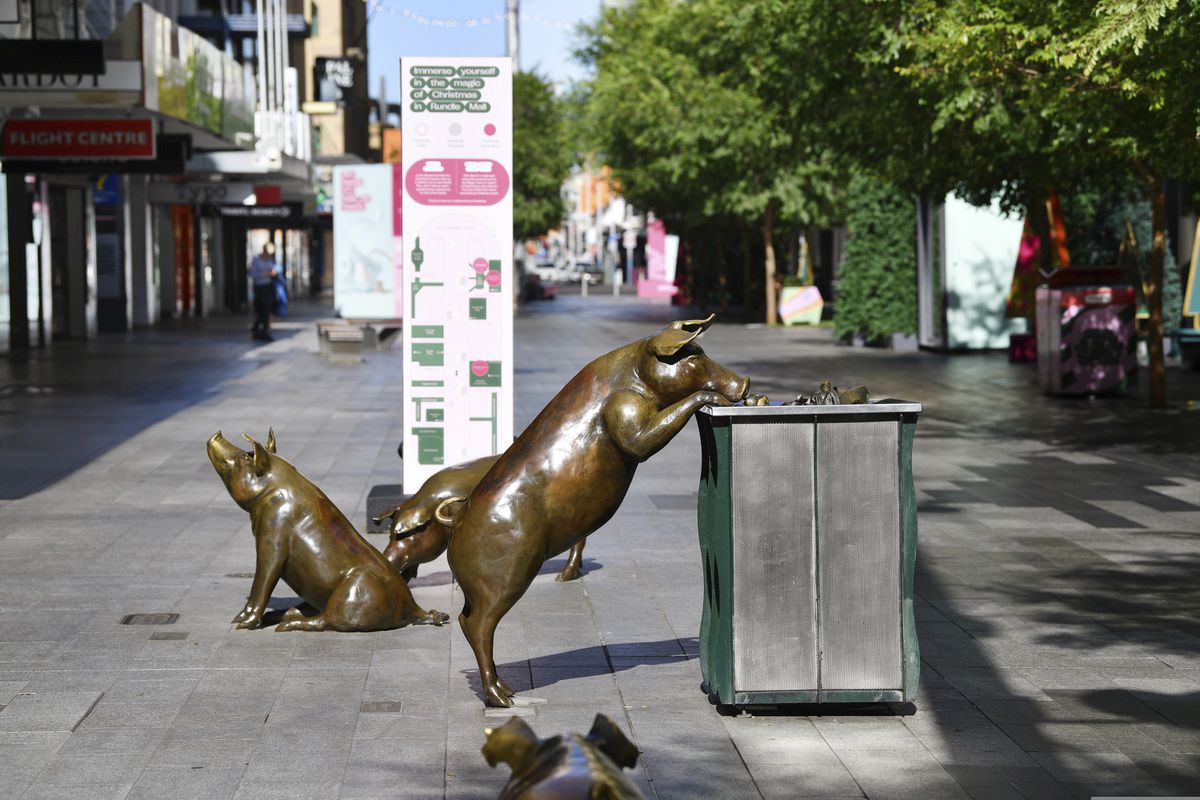 Sculptures of pigs are displayed in a nearly empty pedestrian mall in Adelaide, Australia, Thursday, Nov. 19, 2020. South Australia state that includes the city of Adelaide is in a six-day lockdown schools, universities, bars and cafes closed from Thursday and only one person from each household will be allowed to leave home each day, and only for specific reasons. (David Mariuz/AAP Image via AP)

Sculptures of pigs are displayed in a nearly empty pedestrian mall in Adelaide, Australia, Thursday, Nov. 19, 2020. South Australia state that includes the city of Adelaide is in a six-day lockdown schools, universities, bars and cafes closed from Thursday and only one person from each household will be allowed to leave home each day, and only for specific reasons. (David Mariuz/AAP Image via AP)

ADELAIDE, Australia - It began with a lie about a pizza bar. And it led to the lockdown of an entire state.

Fearing a super strain of the coronavirus, officials in Australia’s fifth-largest city earlier this week ordered an extreme six-day shutdown of South Australia state - they even banned outdoor exercise and dog-walking - after detecting a cluster of cases apparently linked to a pizza shop in an Adelaide suburb.

The severe response was based on the account of a kitchenhand at a quarantine hotel, who told health workers he became infected after collecting a takeout meal from the restaurant, Woodville Pizza Bar, which was being investigated as a possible virus hotspot.

But on Friday, authorities dramatically reversed course after determining in a follow-up interview that the man had lied to contact tracers. The man was, in fact, not a patron but a pizza chef employed at the restaurant, alongside a security guard who had contracted the virus while working at a second quarantine hotel. Suddenly, the outbreak’s transmission chain was clearer.

Police are on standby at the Woodville Pizza Bar after an employee’s deception threw the entire state into lockdown #7NEWS pic.twitter.com/X7oTIALRMx

“We were operating on a premise that this person had simply gone to a pizza shop - very short exposure - and walked away having contracted the virus,” said Grant Stevens, the state’s police commissioner and emergency coordinator. “We now know they are a very close contact of another person who has been confirmed as being positive with covid. It has changed the dynamic substantially.”

“Had this person been truthful to the contact tracing teams, we would not have gone into a six-day lockdown,” Stevens added.

Steven Marshall, the premier of South Australia, expressed his anger over the episode as he announced the lockdown - which affected 1.8 million people - would be lifted on Saturday.

“To say that I’m fuming is an understatement, we’re absolutely livid about the actions of this individual,” he told reporters.

The fiasco, and the reversal of the lockdown barely 36 hours after it began, prompted embarrassment and ridicule across Australia. Some people began tweeting under the #Pizzagate hashtag, reviving memories of a debunked conspiracy theory that emerged during the 2016 U.S. presidential election campaign, centered on Comet Ping Pong pizza bar in northwest Washington.

“Woodville Pizza tell South Australia to say hi to Ashton [Kutcher] because they just got Punk’d,” wrote the Betoota Advocate, an Australian satirical website, in an Instagram post.

For others, including businesses affected by the lockdown, it was no laughing matter.

Expecting a panic-induced rush of customers ahead of the lockdown, traders at Adelaide’s Central Market were well stocked. But on the first morning of lockdown, they were told they were trading illegally and ordered to close.

Guests at Peppers Hotel, the quarantine facility where the latest outbreak emerged, have been forced to restart their 14-day isolation periods, a requirement for all Australians returning from overseas. For Sam Krukeyemer, 30, that means 28 consecutive days stuck in a hotel room.

Concerns about the mental health of hotel guests were raised when one was rushed to the hospital suffering a panic attack after news of the quarantine extension emerged.

“I’ve heard crying and stuff,” said Krukemeyer, who is quarantined with his partner. “I feel for people who are by themselves.”

Woodville Pizza Bar could not be reached for comment on Friday. Police were seen guarding the shop against possible retribution.

While authorities were quick to chastise the untruthful pizza worker, they said he would not face any penalty. And advocates and experts stress the employee may have felt pressured to lie.

“Individuals generally don’t lie for no reason . . . consider that the worker was scared,” says Neha Madhok, an Adelaide resident who leads a racial-justice nonprofit, Democracy in Color.

Quarantine hotel employees in Australia have typically been employed on temporary contracts. State health employees are required to seek permission if they want to work second jobs, but quarantine hotel operations have been outsourced to private companies that aren’t subject to the same obligations.

Despite the pizza debacle, Australia has been among the most successful Western nations in containing the coronavirus.

And for now, as South Australia reviews information provided to its contact tracers, residents are breathing a sigh of relief at regaining their freedom to exercise, or walk their dogs.

Or go for a pizza.