Inconclusive results, missing data: Why experts are pushing back on a study questioning masks 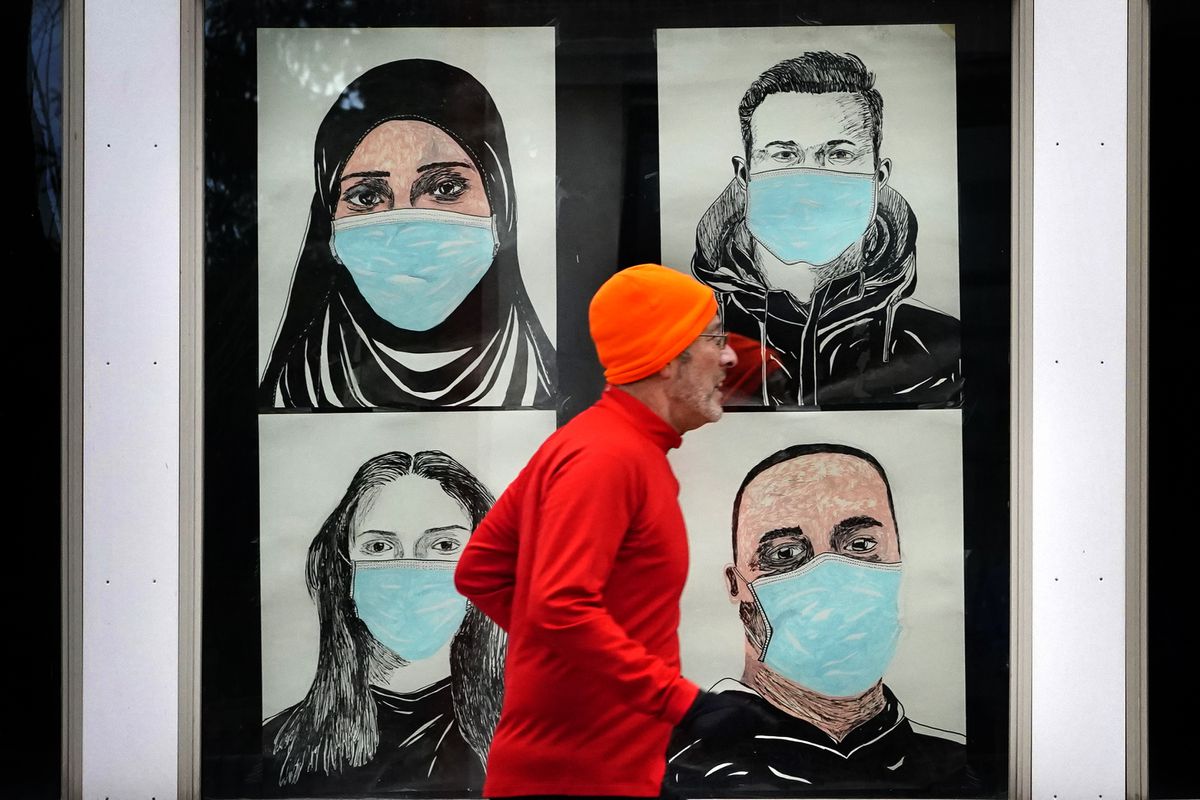 FILE - In this Nov. 16, 2020, file photo, a runner passes by a window displaying portraits of people wearing face coverings to help prevent the spread of the coronavirus in Lewiston, Maine. A deadly rise in COVID-19 infections is forcing state and local officials to adjust their blueprints for fighting a virus that is threatening to overwhelm health care systems. Schools are scrapping plans to reopen classrooms. More states are adopting mask mandates. (AP Photo/Robert F. Bukaty, File)

FILE - In this Nov. 16, 2020, file photo, a runner passes by a window displaying portraits of people wearing face coverings to help prevent the spread of the coronavirus in Lewiston, Maine. A deadly rise in COVID-19 infections is forcing state and local officials to adjust their blueprints for fighting a virus that is threatening to overwhelm health care systems. Schools are scrapping plans to reopen classrooms. More states are adopting mask mandates. (AP Photo/Robert F. Bukaty, File)

Public health experts are raising alarms about a study that some conservatives claim reveals that masks are ineffective at preventing the spread of the virus.

Even the lead researcher argues that assertion is misconstruing science, while other public health experts assert the study has serious design flaws.

Mask-wearing has remained a hot-button political issue even as more states, including those with Republican governors who long resisted such measures, are adopting mask mandates following a rise in cases across the United States. Numerous studies have found masks, and perhaps even the mandates, reduce the risk of transmission.

“Masks have been shown to protect others and, despite the reported results of this study, probably protect the wearer,” former Centers for Disease Control and Prevention director Tom Frieden wrote in an editorial that hashed out what he sees as the various limitations of the study.

In the large, randomized study published in the Annals of Internal Medicine Wednesday, researchers observed more than 6,000 people in Denmark from April to June when masks were not required in the country. Fewer people in the group that were advised to wear masks contracted the virus — or about 14% reduced risk from mask-wearing — but the difference was not statistically significant, indicating that the medical masks issued were not particularly effective at preventing the wearer from getting sick. Other experts, however, argue the study was conducted when there was relatively less community spread of the virus and that testing the participants’ antibodies cannot reliably measure if a person had the virus during the time of the study.

Bundgaard said even the small risk reduction masks offer “is very important, considering it is a life-threatening disease.”

That’s not how conservative circles interpreted the study. Online, commentators and elected officials who have argued against mandating masks construed that the results supported their beliefs. Even before the paper was published, the search term “Danish mask study” spiked on Google as an unfounded theory had spread that other credibly scientific journals had declined to publish the research because liberal scientists were keeping the study under wraps. The Lancet, the New England Journal of Medicine and JAMA told The Washington Post it was policy not to comment on papers the journals do not publish.

The simple act of wearing a covering over one’s mouth and nose has become particularly divisive as some question the changing recommendations issued by top health organizations.

The CDC revised its guidance last week to say that the wearer can benefit from a face covering that filters the droplets carrying the virus. The health agency, which has urged Americans to mask up to protect others since the summer, cited multiple studies evaluating mechanical evidence that concluded masks can block certain respiratory particles, depending on the material of the mask.

The agency referenced a study by Japanese researchers that found “cotton masks, surgical masks, and N95 masks had a protective effect.” Other research has hypothesized that masks can filter out some of the virus-carrying particles, reducing the viral dose and how ill the wearer may become. In a report released Friday, the agency concluded average daily cases decreased in 24 Kansas counties that enforced mask mandates over the summer while 81 counties that did not require masks saw an increase.

Another study referred to by the CDC in its update about the benefit for wearers, led by Eugenia O’Kelly, a doctoral candidate at the University of Cambridge’s engineering department, found increasingly common fabric face masks blocked a range of ultrafine particles.

“I think the overwhelming body of evidence suggests that masks are effective,” O’Kelly said in an interview. “The question comes down to how effective.”

O’Kelly said how people chose to wear their masks can play a large role in their value. The Danish study does not make clear how well people wore the 50 medical-grade masks they were issued but indicates that the participants used more than one a day on average.

Proper education about how to wear a mask and how efficient they can be has been hampered by the divisiveness over policies that require them.

“Because the issue has become so politicized, there’s a real risk — and it’s already being used in this way — that studies like this will be sort of cherry-picked and presented as conclusive evidence that masks are completely ineffective,” Columbia University virologist Angela Rasmussen said.

With an intense media fixation on all new research coming out about the virus that has dominated the globe, Rasmussen and other experts worry that pre-printed, or even peer-reviewed, studies are seized up uncritically and taken out of context.

“Science is a method,” Rasmussen said. “Just because it comes out in a peer-reviewed journal, that doesn’t mean it’s settled. All studies have their limitations, and the peer review process itself has its limitations.”

In letters and blog posts, public health experts express concern about the design of the study and warn that policymakers could misinterpret the research to mean that masks are ineffective.

“However, the more accurate translation is that this study is uninformative regarding the benefits (or lack thereof) of wearing masks outside of the healthcare setting,” one letter states. “As such, we caution decision-makers and the media from interpreting the results of this trial as being anything other than artifacts of weak design.”