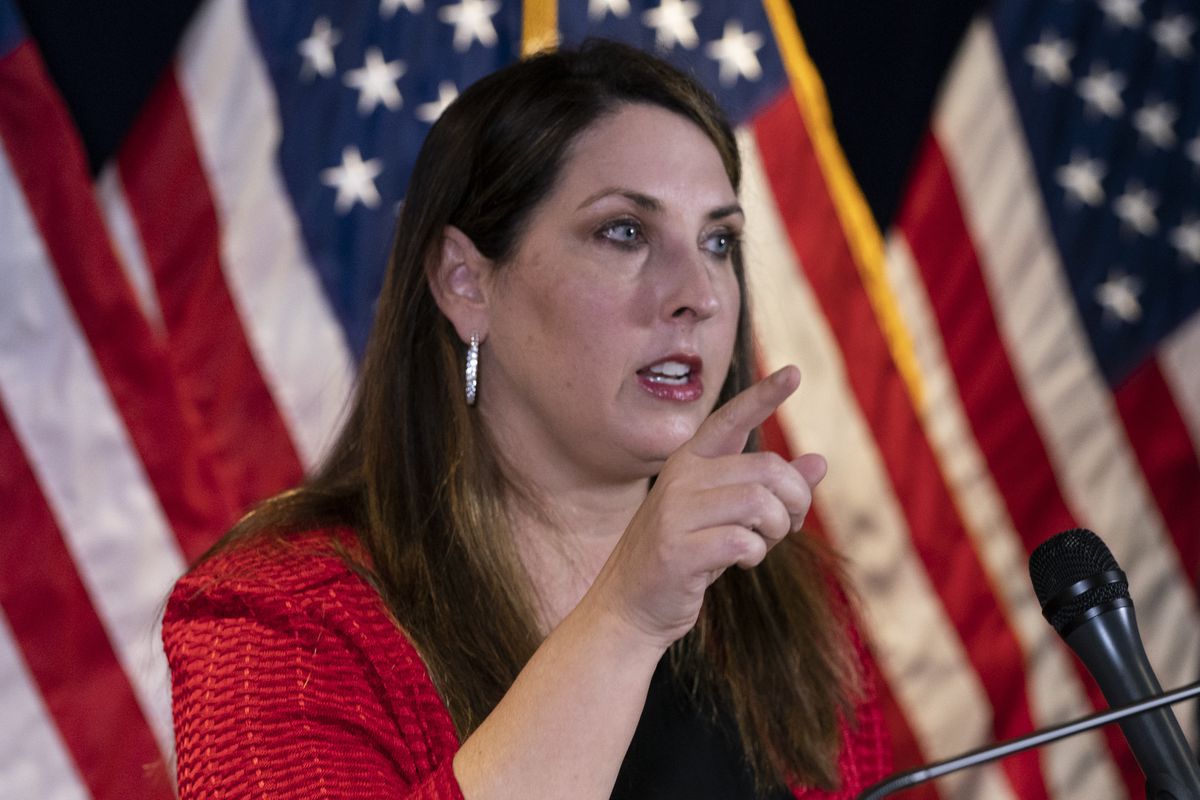 The heads of the Republican National Committee and Michigan Republican Party issued a joint statement Saturday calling for Michigan’s state canvassing board to delay certification of the results of the election, marking the latest attempt by party leaders to intervene in the state’s electoral process.

In the letter - signed by RNC Chairwoman Ronna McDaniel, who is from Michigan, and state GOP Chair Laura Cox - the officials ask the canvassing board to adjourn for 14 days and allow for a “full audit and investigation” before they convene to certify the state’s election results, a procedural step that is set to take place on Monday afternoon.

“This board faces a stark choice,” the letter reads, citing claims of “numerical anomalies” and “procedural irregularities” that they say would leave “the distrust and sense of procedural disenfranchisement felt by many Michigan voters to fester for years” if ignored by the board.

In a tweet Friday, before the letter’s release, Michigan’s Democratic secretary of state suggested such an audit would not be allowed under state law. Michigan law does not allow for the necessary records to be released until after the state certifies the results.

“Not sure who needs to hear this, but under state law (MCL 168.31a) audits can only be conducted after the State Canvassers certify the election,” Secretary of State Jocelyn Benson wrote. “This is [because] election officials do not have legal access to the documents needed to complete audits until the certification.”

Still, the demand increases the pressure on the two Republican members of the four-member state Board of Canvassers, whose actions Monday could slow down the process of finalizing election results in the battleground state.

President-elect Joe Biden leads the state by about 150,000 votes. In an interview this week, Norman Shinkle, one of the Republicans on the state canvassing board, said that although he expected Biden to win the election, he may suggest a delay to allow for an audit of the state’s ballots amid unfounded allegations by the president and his allies of widespread fraud.

Republican members of the state legislature declared Friday after a White House meeting that they had learned nothing to warrant reversing the outcome in their state.

The lawmakers used their own personal funds for the gathering, said Gideon D’Assandro, spokesman for Chatfield.

The Trump hotel - a popular Republican hangout - is expensive, even during the pandemic: on Saturday, the hotel’s website said the lowest available rate for that night was $476.

McDaniel and Cox’s demand for scrutiny is entirely focused on the election results in Wayne County, Michigan’s largest and most Democratic county, which includes Detroit.

Wayne County officials have noted discrepancies in the vote count in a number of precincts. But they said the size of the errors was small - a difference of one or two votes per precinct, affecting a total of about 450 votes.

The GOP leaders said they “echo” the concerns voiced by failed Republican U.S. Senate candidate John James this week, citing a letter filed yesterday by his campaign that made claims of irregularities in Wayne County’s elections. Cox and McDaniel called the accusations made by the James campaign “deeply concerning.”

“In light of the already unprecedented nature of this election - conducted largely by mail in the midst of an ongoing pandemic,” they wrote. “It would be a grievous dereliction of this Board’s duty to the people of Michigan not to ensure that the irregularities identified by the James Campaign are thoroughly investigated by a full audit before certifying Wayne County’s results.”

Attempting to offer reassurance that this was not an attempt to indefinitely block the state’s process of selecting electors for Biden, they wrote that “neither that adjournment nor the audit of Wayne County’s results would impermissibly delay certification of the election results beyond the statutory deadline of December 7, 2020.”

Earlier this week, Benson reminded Michigan that her office had already intended to conduct an audit of the election and has been preparing to do so for the past two years, noting that this would be a typical post-election procedure and was not being done in response to disproved or unfounded claims of election fraud.

“Throughout my tenure as Michigan Secretary of State, and indeed long before, I have spoken repeatedly on the importance of post-election audits to ensure Michiganders can trust the outcome of our elections as an accurate reflection of the will of the people,” she said in the statement. “Notably, audits are neither designed to address nor performed in response to false or mythical allegations of ‘irregularities’ that have no basis in fact.”

According to Michigan election law, the secretary of state “authorize the release of all ballots, ballot boxes, voting machines, and equipment after 30 days following certification of an election by the board of state canvassers” in the event that a recount petition has been filed or a court has issued an order “restraining interference” with these materials.

The Washington Post’s Tom Hamburger in Detroit contributed to this report.