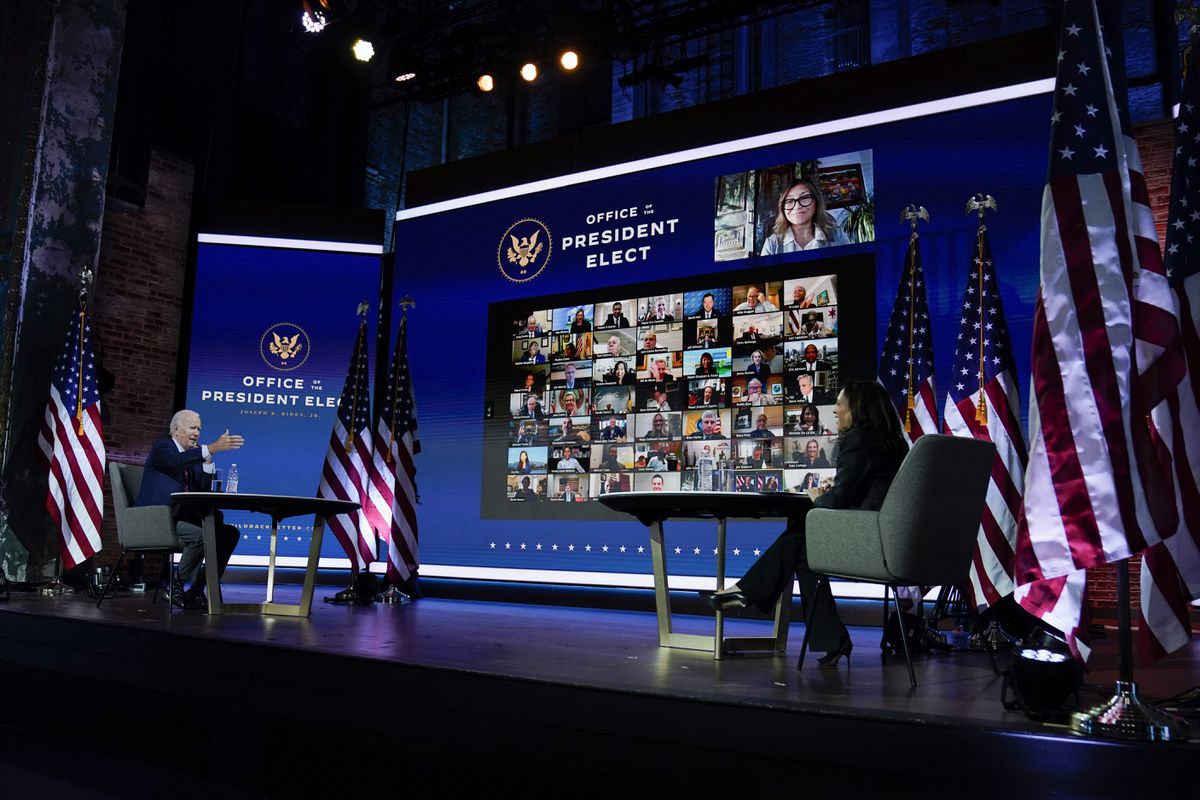 WASHINGTON - President-elect Joe Biden’s initial slate of nominees demonstrates that he aims to reverse much of President Donald Trump’s agenda with figures who have promoted the policies that Trump rebuffed, denigrated and used to help fuel his rise to power.

Biden’s top picks, announced Monday, in the past helped push for trade deals, aimed to sign international treaties and advocated for foreign wars, positions that after Trump’s victory in 2016 triggered widespread soul-searching among Democrats over how they had misread the sentiments of voters on whose support they had long counted.

What they learned from that defeat and how they try to govern this time will be a major test of whether Biden feels a need to respond to the anxieties among supporters of Trump - who in November received the second-most votes in American history, behind only Biden; whether he views his election as a sweeping mandate to shift in an entirely different direction; or whether he settles somewhere in the middle.

At least initially, some of the nominees and their allies suggest that they will not slip easily into the same positions they took when last in power. Some of Biden’s picks believe that Trump benefited from highlighting problems that the Obama administration underplayed or failed to address, particularly the economic populism that was more widespread than they believed, both domestically and internationally.

Amid the coronavirus pandemic and the simultaneous economic collapse, that populist streak has not lessened. Trade deals will be harder to pursue than they were years ago, and the nation seems to have little appetite for foreign intervention.

But Biden’s campaign also was defined by calling the Trump era, if it were held to a single term, “an aberrant moment in time.” So his victory is being read by Biden and his allies as something akin to the revenge of the Washington establishment.

Biden’s early commitments are in many ways meant to undo Trump’s actions, using the same people who created those policies in the first place, in a symmetric reversal of Trump’s own outsider effort to undo the Obama administration’s legacy.

If not household names, Biden’s picks are steeped in the ways of Washington. Former deputy secretary of state Antony Blinken, a longtime Biden adviser, will become secretary of state, a position once held by John Kerry, who now will be climate envoy. Jake Sullivan, who was national security adviser to Vice President Biden, will now become national security adviser to President Biden.

Biden is expected to name as his treasury secretary Janet Yellen, who would be the first woman to hold the prominent post. Trump, breaking with precedent, declined to reappoint Yellen as chairwoman of the Federal Reserve in 2018.

Biden tapped Alejandro Mayorkas, who held several posts in the Obama administration, as the nation’s first Latino homeland security secretary; Linda Thomas-Greenfield, a former career Foreign Service officer, as ambassador to the United Nations; and Avril Haines, a former deputy director of the CIA, as the first female director of national intelligence.

Biden’s picks are all known quantities whose nominations signal a return to a more predictable era of American policy. By design, they seem meant to project a dutiful competence as Biden creates a government overseen by those who have run it before.

Many of his picks have spent most of their adult lives in Washington, forging deep relationships with those who have done the same and finding familiarity in the think tank speaking circuit, in the cocktail party crowds, and in writing for wonky but influential publications. They all have long-standing relationships with Republican lawmakers, which could smooth their confirmation hearings and open the possibility of some bipartisanship, and they are well known among NATO and Middle Eastern allies.

They helped negotiate the Paris climate accords and the Iran nuclear deal. They advocated for the Trans-Pacific Partnership (TPP), a trade deal that was part of a strategic pivot toward Asia. All were shredded by Trump.

In a recent pre-election interview with The Washington Post, Blinken said that a Biden victory “sends a powerfully positive jolt through the international system that America is back. But then you have to act on that.”

He acknowledged that Trump had strained global alliances and often isolated the United States on the world stage, in a way that will test the Biden administration’s ability to recalibrate its diplomatic approach.

“The central dilemma,” he said, is that the world now requires “more rather than less collective action, and yet rising nationalism, eroding faith in government, faltering institutions . . . make the international cooperation we need harder than ever to achieve.”

While Biden’s team has advertised the reversal of Trump’s actions as its main objective, some of the president-elect’s aides have acknowledged that Trump’s victory in 2016 forced them to question previously held beliefs.

Sullivan, who supported the Obama administration’s TPP trade pact, has since acknowledged that Democrats overlooked the potentially negative consequences of such trade deals on American workers. Trump blamed both his 2016 opponent, Hillary Clinton, and Biden for destroying manufacturing jobs with the NAFTA trade deal.

In a September report, Sullivan underscored how trade deals can drive employers to pull out of U.S. communities and disrupt people’s livelihoods with few available alternatives. Democrats have often responded to this problem with federally funded economic-assistance programs, which Sullivan said were often “too little, too late.”

It remains unclear whether Sullivan and other members of Biden’s team have a view of trade that is more than just cosmetically different from previous Democratic administrations, a prospect his defenders reject.

“I think it would be a mistake to say that just because these are names we know that it’s going to be a repeat of policies we’ve seen,” said Jenna Ben-Yehuda, president of the Truman Center, a foreign policy organization on whose board Sullivan sits. “These are smart people who’ve seen the world shift under Trump.”

“On China, 2021 is not 2016. We are in a very different place,” said Wendy Sherman, the former No. 3 official at the State Department under Obama who worked closely with Biden and his team.

She said the Biden administration probably will continue to confront China as Trump did in areas such as security and emerging 5G technology, but would also seek cooperation in critical matters such as nuclear nonproliferation and climate change. “The Biden-Harris administration likely will have a sophisticated, complex but very clear-eyed relationship with China,” she said.

Blinken said in the Post interview that the administration will take its time in figuring out China.

“We need to step back,” he said. Biden “is very focused on basically putting ourselves in a position of strength from which to engage China so that the relationship moves forward more on our terms rather than theirs.

“By every key metric, China’s position is stronger, and ours is weaker, as a result of President Trump’s leadership. His actions have helped advance most of China’s strategic goals - weakening American alliances, withdrawing America from the world and leaving a vacuum for China to fill; a green light to trample on human rights and democracy; debasing our own democracy by attacking it.”

Still, Blinken and others have suggested that the era of American interventionism is probably fading. And while he has robustly rejected Trump’s “America First” philosophy, many in the foreign policy establishment are still grappling with what comes next.

“The fact is, whatever tolerance most Americans had for the global role the United States embraced after World War II began to fade with the collapse of the Soviet Union and was shattered by the wars in Iraq and Afghanistan and the 2008 financial crisis,” Blinken co-wrote last year in a Post opinion piece with Robert Kagan, a senior fellow at the Brookings Institution. “Whoever wins office in 2020 will have a hard time bucking a trend that preceded Trump and will likely survive him.”

Like Biden, Blinken believes that the first priority is getting America’s own house back in order. One of the primary things Blinken has learned during the Trump era, said a person closely familiar with his thinking, who spoke on the condition of anonymity to be candid, is the ability of outside groups to have a much greater influence on foreign policy.

Over the past four years, a rethinking has occurred among the foreign policy establishment - and among Biden’s Cabinet picks - over some of the fundamental shifts that have occurred as a result of Trump.

Even as Biden has received a parade of congratulatory phone calls from world leaders, there are still major questions about the potency of global populism, which saw the rise of not just Trump but also leaders such as British Prime Minister Boris Johnson, Brazilian President Jair Bolsonaro and Polish President Andrzej Duda.

Thomas Shannon, a former State Department official who spent 35 years as a diplomat, characterizes the new team as setting a different course, not a restoration.

“If we look back, we’ll turn into a pillar of salt,” he said, citing the biblical tale of what happened to Lot’s wife when she disregarded orders and looked back as they fled Sodom and Gomorrah.

Shannon said the world has changed dramatically - not just since Trump won the 2016 election but since 2008, when Obama won.

“What this election was about in many ways is allowing the U.S. to set a course for itself into the future. What I think Biden’s team represents are people who know how to get things done,” he said.

“I think these people are painfully aware of what’s happened over the last four years, and they’re very intent on returning the U.S. to meaningful engagement with the world,” Shannon added. “But they recognize we have to earn our way back. It’s not just a question of opening the door, stepping out and saying, ‘Here we are, we’re ready to assume leadership now.’ It has to be won again.”