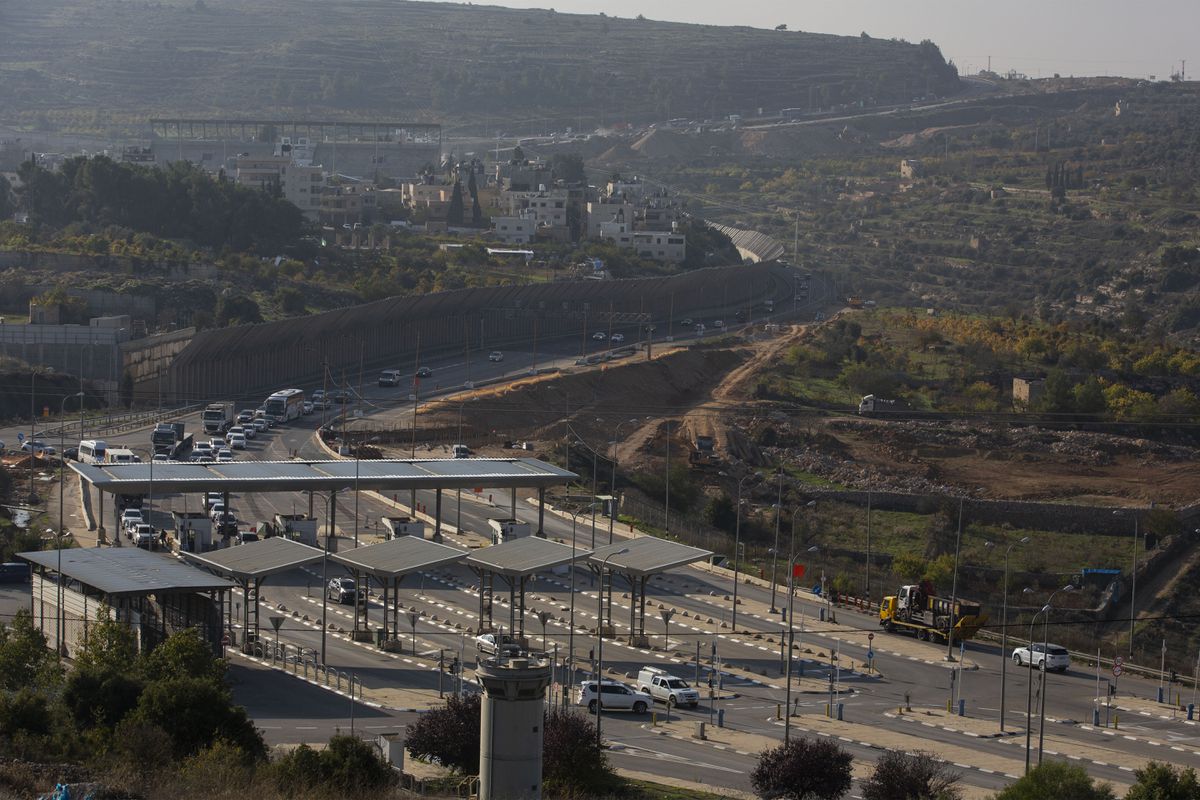 Roadworks expand a road to Israeli settlements inside the West Bank, near the city of Bethlehem, Sunday, Nov. 29, 2020. In years to come, Israelis will be able to commute into Jerusalem and Tel Aviv from settlements deep inside the West Bank via highways, tunnels and overpasses that cut a wide berth around Palestinian towns. Rights groups say the new roads that are being built will set the stage for explosive settlement growth, even if President-elect Joe Biden's administration somehow convinces Israel to curb its housing construction. (AP Photo/Majdi Mohammed)

Roadworks expand a road to Israeli settlements inside the West Bank, near the city of Bethlehem, Sunday, Nov. 29, 2020. In years to come, Israelis will be able to commute into Jerusalem and Tel Aviv from settlements deep inside the West Bank via highways, tunnels and overpasses that cut a wide berth around Palestinian towns. Rights groups say the new roads that are being built will set the stage for explosive settlement growth, even if President-elect Joe Biden's administration somehow convinces Israel to curb its housing construction. (AP Photo/Majdi Mohammed)

JERUSALEM — In the coming years, Israelis will be able to commute into Jerusalem and Tel Aviv from settlements deep inside the West Bank via highways, tunnels and overpasses that cut a wide berth around Palestinian towns.

Rights groups say the new roads will set the stage for explosive settlement growth, even if the incoming U.S. administration somehow convinces Israel to curb housing construction. The costly infrastructure projects signal that Israel intends to keep large swaths of the occupied territory in any peace deal and would make it even harder to establish a viable Palestinian state.

“This is not another hundred housing units there or here,” said Yehuda Shaul, an Israeli activist who has spent months researching and mapping out the new projects. “This is de facto annexation on steroids.”

Construction already is underway on a huge tunnel that Shaul says will one day allow settlers from Maale Adumim, a sprawling settlement east of Jerusalem, to drive into the city and onward to Tel Aviv without passing through a military checkpoint or even hitting a traffic light.

South of Jerusalem, work is underway to expand the main highway leading to the Gush Etzion settlement bloc and settlements farther south, with tunnels and overpasses designed to bypass Palestinian villages and refugee camps.

Palestinians will be allowed to drive on many of the new roads, but the infrastructure will be of limited use to them because they need permits to enter Israel or annexed east Jerusalem.

Israel seized the West Bank and east Jerusalem in the 1967 war and has since built a far-flung network of settlements that house nearly 700,000 Jewish settlers. The Palestinians want both territories for their future state and view the settlements as a violation of international law and an obstacle to peace — a position with wide international support.

Supporters of settlements view the West Bank and Jerusalem as the historical and biblical heart of Israel, seeing the settlements as a way of preventing any partition of the Holy Land.

But most Israelis live and work in the main cities. Except for an ideological minority, most Israelis would be uncomfortable living deep inside the West Bank, where two-lane roads pass through military checkpoints and Palestinian villages, and where clashes and rock-throwing can erupt at any time.

The new roads promise to change all that, transforming settlements into affordable suburban communities with safe, easy access to cities and public transportation. Shaul estimates the new infrastructure could facilitate plans for more than 50,000 settler housing units in the West Bank and another 6,000 in east Jerusalem.

Shaul, an army conscript during the Israeli military’s suppression of the second Palestinian uprising in the early 2000s, is a co-founder of Breaking the Silence, a group of former Israeli soldiers who document human rights abuses in the occupied territories. In recent months, he has turned his attention to Israeli planning.

His findings are based on minutes from several meetings held in recent years by parliamentary subcommittees charged with improving West Bank infrastructure. He also cites a strategic plan presented by Transportation Minister Miri Regev, a hard-line supporter of settlements, to a group of settlement mayors last month.

In a statement after the meeting, Regev called it “an exciting day for the settlements and for the state of Israel, which builds and is building in all areas of the homeland.” She said it provided a “holistic vision” for “a future development plan for the region.”

The ministry did not respond to requests for comment.

Oded Revivi, the mayor of the Efrat settlement in the West Bank who attended the meeting, said the draft plan was “very thorough,” and that the ministry was open to suggestions, “taking into account the needs of both populations, both the Jews and the Arabs.”

He said U.S. President Donald Trump’s Mideast plan, which would allow Israel to annex about a third of the West Bank, including all its settlements, had proven that the settlements are not an obstacle to peace. That plan was immediately rejected by the Palestinians and is likely to be scrapped by President-elect Joe Biden, who opposes annexation.

Alon Cohen Lifshitz, an expert at Bimkom, an Israeli rights group that focuses on urban planning, said the main aim of the road projects is to create a “matrix of control” that ensures the free movement of Israelis while further fragmenting the areas governed by the Palestinian Authority.

“Most of the settlers are not (ideological). They are looking for options to live the dream in affordable housing,” he said. “This is the main obstacle for the expansion of settlements.”

The same process unfolded on a much smaller scale more than a decade ago, when Israel opened Route 398, connecting settlements in the southern West Bank to Jerusalem. Informally known as the “Lieberman Road,” after former Transportation Minister Avigdor Lieberman, who lives in one of the settlements, it reduced the driving time from 40 minutes to 10 minutes. The area’s settler population nearly doubled in the next six years, to about 6,000 people, according to Peace Now, an Israeli anti-settlement watchdog.

Many Palestinians view the roads as another kind of barrier erected to separate communities from one another and farmers from their land. They say much of the construction is on land expropriated from farmers, who have little hope of recourse in Israeli courts.

“This is a military occupation, so when they take a decision, they impose it by force, without any coordination with the other side, with the owners of the land,” said Mohammed Sabateen, head of the local council in Husan, a Palestinian village south of Jerusalem sandwiched between a growing settlement and one of the new road projects.

“These roads are primarily designed for Israelis and settlers, not Palestinians,” he said. The military can also cut off Palestinian access at any time by closing yellow gates at the main access points.

Israel is also at work on so-called “fabric of life” roads intended to benefit the Palestinians, but Shaul says these are usually aimed at routing them away from settlements. One has been dubbed the “apartheid road” because it runs alongside a road open only to Israelis, and the two are separated by an imposing concrete wall.

Biden has vowed to work with Israel and the Palestinians to restart peace talks, without offering much detail. It’s possible he will adopt a similar approach to the Obama administration, which pressed Israel to freeze or curb settlement growth as part of peace efforts that went nowhere.

But even if Biden succeeds in convincing Israeli Prime Minister Benjamin Netanyahu to temporarily curb settlement growth, the road infrastructure would ensure plenty of demand once the pause ended.

“The second the freeze is over, this infrastructure will be there to facilitate even greater growth,” Shaul said. “This would be the foundation for the development of settlements for the next 20 years.”