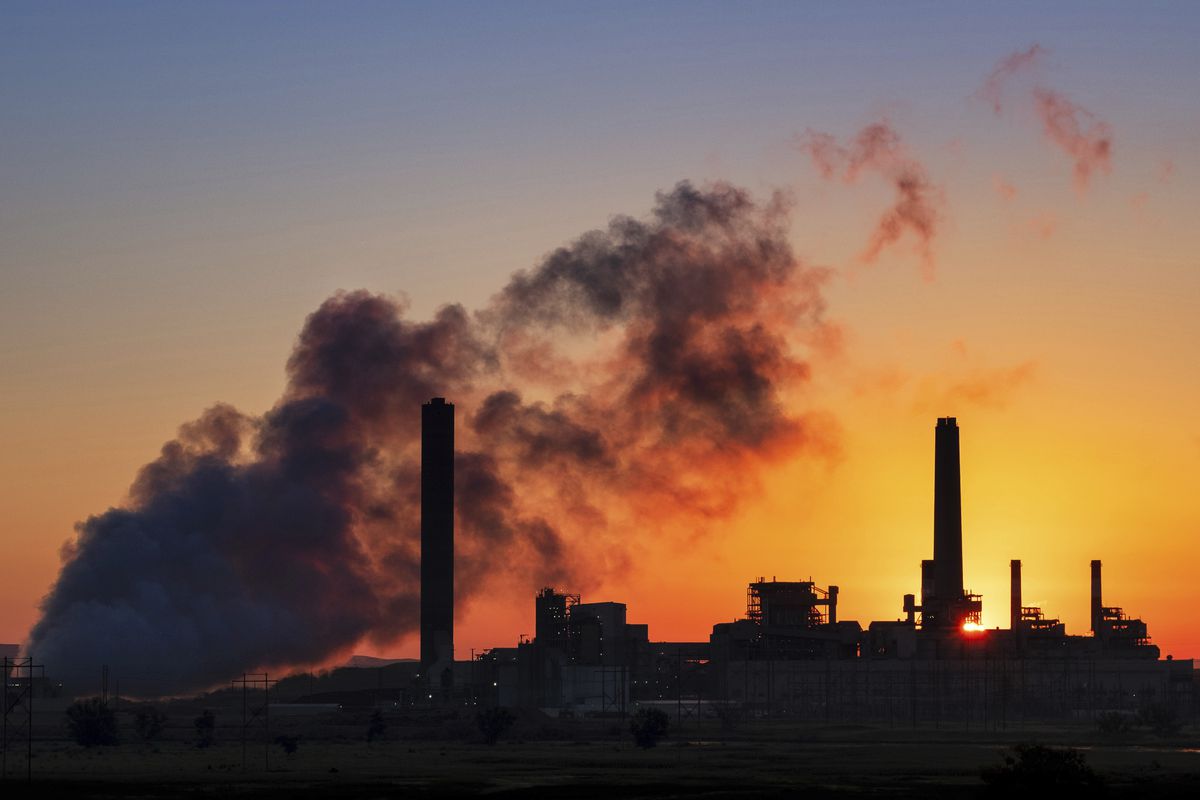 WASHINGTON - The Trump administration on Monday rejected setting tougher standards on soot, the nation’s most widespread deadly air pollutant, saying the existing regulations remain sufficient even as some public health experts and environmental justice communities had pleaded for stricter limits.

Environmental Protection Agency Administrator Andrew Wheeler signed the standards Friday, according to two individuals familiar with the matter who spoke on the condition of anonymity to discuss internal deliberations.

The agency locked in current thresholds for fine particle pollution for another five years, despite mounting evidence linking air pollution with illness and death. In its decision, the EPA maintained that the Obama-era levels, set in 2012, are adequately protective of human health. Agency scientists had recommended lowering the annual particulate matter standard to between 8 and 10 micrograms per cubic meter in a draft report last year, citing estimates that reducing the limit to 9 could save roughly 12,200 lives a year.

The current national standards limit annual concentrations of soot to 12 micrograms per cubic meter of air. Emissions on specific days are allowed to be as high as 35 per cubic meter, a standard set 14 years ago. These fine particles - which measure less than 2.5 micrometers in diameter, or one-thirtieth the width of a human hair - can enter the lungs and bloodstream, causing inflammation that can lead to asthma, heart attacks and other illnesses.

Monday’s news came as a gut punch to people like Bridgette Murray, whose neighbors in the historically Black, downtown Houston neighborhood of Pleasantville have long struggled with air polluted by nearby petrochemical manufacturing and a bustling highway. The community erected its own monitors last fall to detect pollutants spewing into the air.

A year of data, gathered with the support of the Environmental Defense Fund and Texas Southern University, brought worrisome results: the concentration in the air of fine particle pollution, known as soot, averaged 12 micrograms per cubic meter.

Murray has suffered headaches when the air quality worsens, which is permissible given that daily concentrations are legally permitted to spike up to 35 micrograms per cubic meter. Other residents of the historic Black community have endured various lung ailments and cancer. So, the community went looking for answers. “We wanted to move from that kind of anecdotal posture to actually collect some data,” said Murray, executive director of a community-based organization called Achieving Community Tasks Successfully.

Many activists and public health experts have pushed for stricter national soot standards, saying that a mounting body of scientific evidence linking air pollution to lethal outcomes from respiratory diseases, including covid-19.

To Murray, the move offers fresh evidence that the Trump administration is not doing enough to protect disadvantaged communities.

“It is an artificially-high standard that is supportive of industry,” she said, noting her residential neighborhood lies near a massive ship channel that’s an engine for economic activity. “But very little is being done to help those who are exposed to that pollution on a day-to-day basis.”

An EPA advisory committee made up of outside experts split on the question, with some members calling for tighter standards and others arguing the current rules remain sufficient. Ultimately, Wheeler decided this spring to maintain the existing standards for fine particulate matter - the nation’s most widespread deadly pollutant.

“The United States has some of the cleanest air in the world, and we’re going to keep it that way,” Wheeler told reporters at the time. “We believe the current standard is protective of public health.”

Soot comes from a variety of sources. Among them: industrial operations, incinerators, car and truck exhaust, smokestacks and burning wood. Poor and minority communities in the United States tend to be exposed to greater air pollution, including soot, often because they often are located close to highways and industrial facilities.

A 2019 study by the Union of Concerned Scientists found that on average, communities of color in the Northeast and Mid-Atlantic breathe 66 percent more air pollution from vehicles than White residents. A separate study published last year in the Proceedings of the National Academies of Sciences found that Black and Hispanic communities in the U.S. bear a “pollution burden” that far exceeds any air pollution they produce.

Long-term exposure to polluted air has increased the risks Americans of color face when it comes to heart and respiratory illness, including covid-19, which is disproportionately killing African Americans.

“This flies in the face of good science and good public health. It is outrageous,” said Dominique Browning, co-founder and the head of Moms Clean Air Force, an advocacy group that pushes for robust air and climate oversight around the country.

“It builds in years more of assaults on the human body, especially in places where people are breathing the worst of it,” she added. “It just basically sends a message of not caring about people.”

But several major business groups, including the U.S. Chamber of Commerce and American Petroleum Institute, backed the administration’s decision to retain the existing standards, noting that annual concentrations of fine particulate matter are down by 39 percent since 2000.

Monday’s decision marks the Trump administration’s latest move in a long-running effort to ease industrial regulation. The White House has rolled back more than 125 environmental safeguards during Trump’s time in office, according to a Washington Post analysis, with plans to finish nearly a dozen more by mid-January. Those rollbacks include scaling back automobile fuel efficiency standards and emissions limits for coal-burning plants, as well as lifting Obama-era methane limits on new oil and gas wells.

In most instances, federal agencies are required to conduct an “environmental justice” analysis to determine how these actions will affect vulnerable communities. But on multiple occasions, the Trump administration has downplayed the impact of its decisions on poor and minority communities.

EPA recently finalized changes to a rule known as “Once In, Always In,” which requires facilities to always operate the most advanced pollution controls if they annually emit 10 tons or more of a single hazardous air pollutant or 25 tons or more of at least two such pollutants. The updated rule exempts all facilities that have already cut their hazardous air emissions below these levels, which could potentially allow some companies to pollute more as long as they don’t reach the legal threshold again.

In the inter-agency analysis, according to documents posted online, one White House Office of Information and Regulatory Affairs official noted the change “raises the potential for an increase overall hazardous air pollutant and consequent health effects, especially for populations near area source. It previously has been noted that the burden of cancer risk for hazardous air pollutants falls disproportionately on racially segregated metropolitan areas, contributing to health disparities.”

“The EPA states they are unable to assess the extent to which health may be may be harmed by the regulatory relief provided by this final rule,” the staffer added. “We believe EPA should conduct a thorough regulatory impact analysis that estimates a set of worst case scenario assumptions in order to be able to convey to the public the potential harms of this rule.”

The Environmental Integrity Project did conduct such an analysis, examining the potential impact on 12 plants in Illinois, Indiana, Michigan, Ohio, and Minnesota. It found they could more than quadruple their emissions of toxic air pollution, from 121,082 pounds in 2018 to as much as 540,000 pounds each year.

In a separate rollback, the agency scrapped limits on leaks of methane - a potent greenhouse gas - from oil and gas operations. During the inter-agency review, one administration official noted in the margins, “implementing this rule will have adverse human health and environmental effects on racial and ethic minorities, low-income and rural populations.”

In another section, a Health and Human Services Department official noted that the rule could cause more ozone, and “ozone pollution exposure may be an important risk factor that increases susceptibility to and severity of infectious diseases, including COVID-19.”

In the case of the national soot standards, critics are already gearing up to challenge them in court. Most areas of the country have now met the annual standards, with the exception of portions of Southern and Central California and parts of Pennsylvania and Idaho - though EDF’s senior director for climate and health, Elana Craft, noted that inadequate air monitoring may account for those results.

Craft and her colleagues found that roughly 10 percent of the Houston area has concentrations of PM 2.5 above 12 micrograms per cubic meter in 2015, meaning that area failed to meet the current standards. “The case is strong that the administration used flawed science in keeping the standards, and ultimately that will be borne out in court,” she said.

But even if opponents of the decision eventually prevail in court, or if the Biden administration pursues stricter national standards, the reality is that residents in many places will have to live with dirtier air for longer, said Michele Roberts, national co-coordinator for the Environmental Justice Health Alliance.

“It’s not just a quick fix overnight. These communities are going to be breathing the same air for some time,” Roberts said. “People of color and the poor -- that is who gets hit the hardest by this.”