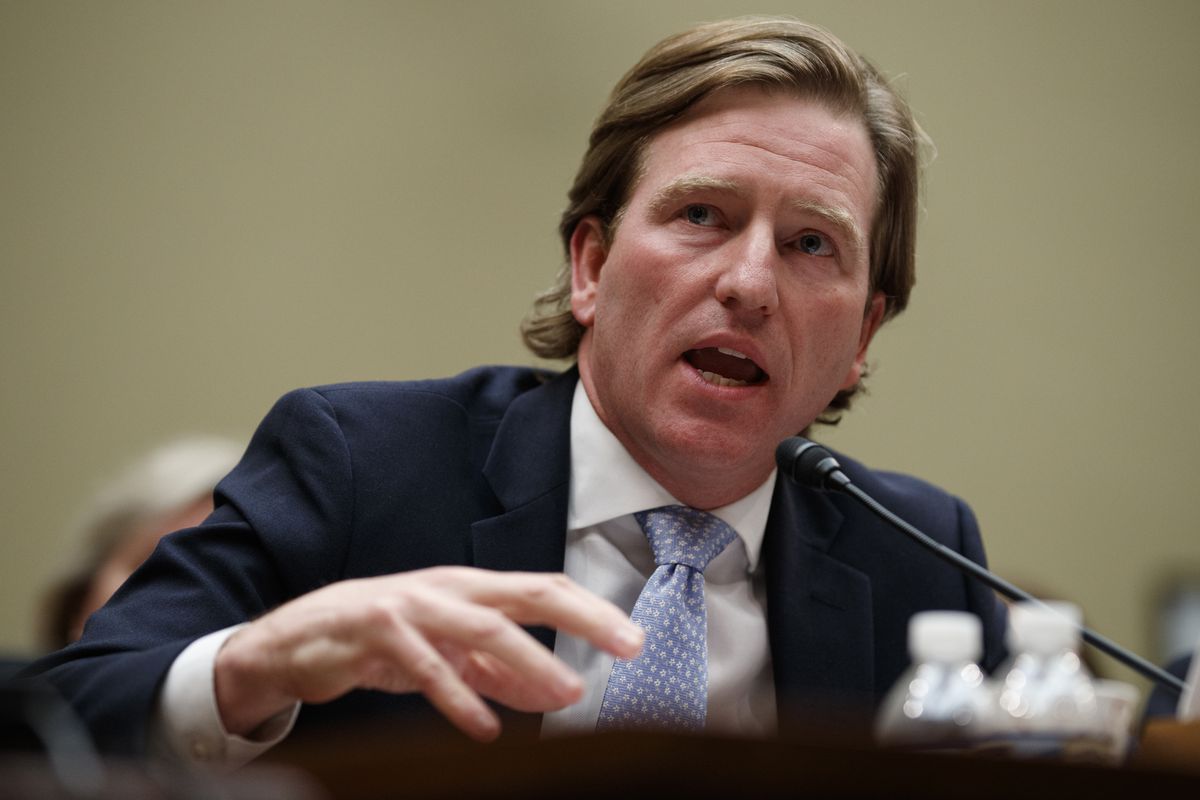 Christopher Krebs, director of the Cybersecurity and Infrastructure Security Agency, testifies on Capitol Hill in Washington in May 2019.(AP Photo/Carolyn Kaster, File)

Christopher Krebs, director of the Cybersecurity and Infrastructure Security Agency, testifies on Capitol Hill in Washington in May 2019.(AP Photo/Carolyn Kaster, File)

The former top U.S. cybersecurity official responsible for securing November’s presidential election sued the Trump campaign and one of its lawyers for defamation Tuesday, asserting that they conspired to falsely claim the election was stolen, attack dissenting Republicans and fraudulently reap political donations.

Christopher Krebs, who was fired Nov. 17 by President Donald Trump after he refuted the president’s claims of widespread election fraud, singled out comments made almost two weeks later by attorney Joseph diGenova, who said Krebs should face the same punishment inflicted on those convicted of treason because he had asserted that the 2020 election was the most secure in history.

“He should be drawn and quartered,” diGenova said on the outlet Newsmax, a third defendant. “Taken out at dawn and shot.”

He also labeled Krebs an “idiot” and a “class-A moron” during the segment, which unleashed a flood of social media comments that left Krebs, his wife and several of their young children in fear for their lives, according to the lawsuit.

At one point, according to the lawsuit, the Krebs’s 10-year-old child asked: “Daddy’s going to get executed?”

The 52-page complaint was filed in Maryland state court in Montgomery County, where diGenova resides. The lawsuit accused diGenova and the Trump campaign of defamation and “intentional infliction of emotional distress.” It labeled Newsmax an aider and abettor. Krebs seeks a jury trial, money and punitive damages and an injunction ordering Newsmax to remove video of the incident.

“Threats like these will not stop me from speaking out,” he said in an interview. “I will take the necessary steps to protect myself and my family.”

DiGenova has said his comments about Krebs were sarcastic and made in jest.

“I, of course, wish Mr. Krebs no harm,” he said in a Dec. 1 statement. “This was hyperbole in a political discourse.”

The Trump campaign and Newsmax did not immediately respond to messages seeking comment on Tuesday. When reached, diGenova declined to comment.

Krebs’s accusations come as the Trump campaign’s strategy of using the courts to overturn President-elect Joe Biden’s victory through baseless claims of widespread fraud has so far been a complete failure but has helped raise about $207.5 million since Election Day. Lawyers for the president and his allies have repeatedly failed to present credible evidence of wrongdoing that would justify invalidating millions of votes in swing states, and they are approaching nearly 50 losses in four weeks, according to a tally by Democratic lawyer Marc Elias.

The lawsuit also spotlights a split between dominant traditional media players like Fox News and Twitter, and newcomers like Newsmax and social media site Parler, which are increasingly drawing Trump’s support and his loyalists amid controversy over whether they provide legitimate news and safe online communities. Late last week, the attorneys for Krebs asked Newsmax Media chief executive Christopher Ruddy to remove from the company’s website its interview of diGenova. And they submitted a letter to executives at Parler, asking the social media site to remove approximately 15 posts calling for Krebs’s death.

“Why waste a bullet, just smash his head with a rock,” wrote one user.

The lawsuit asserts that the defendants have a “symbiotic relationship”: Newsmax disseminated the campaign’s attacks on the election, eliciting endorsements from Trump, increasing ratings and drawing political donations.

“United by a common desire to incite outrage over the 2020 election and those who would defend its integrity, Defendants worked in concert to attack and punish Plaintiff for informing the public that the election was secure,” the complaint said.

Krebs surfaced last month as a high-ranking, lifelong Republican willing to call out Trump’s unfounded allegations of widespread voter fraud. At the time, he directed the Cybersecurity and Infrastructure Security Agency (CISA), part of the Department of Homeland Security.

On Nov. 12, CISA published a joint statement with state and local elections officials that described the presidential election as “the most secure in American history.” Trump fired Krebs five days later over Twitter, calling his comments “highly inaccurate.”

The next day, diGenova called in by phone to “The Howie Carr Show,” broadcast on Newsmax.

“Mail-in balloting is inherently corrupt, and this election proved it,” diGenova said before suggesting that Krebs be executed.

A second later, the show flashed to an image of Krebs speaking on “60 Minutes.” Krebs’s attorneys say that suggests two possibilities: Either the show knew in advance that diGenova was about to unload on Krebs and planned accordingly, or the show was recorded ahead of time, which in theory would have allowed Newsmax to cut the execution suggestions.

“A telltale sign,” the lawyers wrote, “revealing Defendant Newsmax’s role in this conspiracy.”

One of Krebs’s attorneys, Jim Walden of the New York firm Walden Macht & Haran, said the conspiracy to discredit Trump’s critics, as asserted in the lawsuit, was hatched before the election when the Trump campaign realized it couldn’t win the mail-in votes. The complaint asserts that the effort is ongoing and extends to the campaign’s legal challenges against voting procedures and attempts to discredit officials.

“Part of the conspiracy alleged is trying to hawk false evidence to courts, and part of it is to fraudulently raise money,” Walden said of the suit’s allegations. “We intend to seek discovery to learn the full scope of the conspiracy, and we’ll amend our suit depending on where the evidence takes us.”

Trump’s political operation has been raising funds around the election results - bringing in more than $200 million since Election Day.

“We cannot afford a Joe Biden presidency. We must FIGHT for the future the American People TRULY support: FOUR MORE YEARS OF PRESIDENT TRUMP,” one email pitch read. “Will you allow the CORRUPT Democrats to try to STEAL this Election and impart their RADICAL agenda on our Country? Or will you step UP and DEFEND your Country?”

The contributions, from thousands of grass-roots donors across the nation, are split among several accounts, including Trump’s new leadership PAC, an entity that is loosely regulated and could be used to personally benefit the president after he leaves the White House.

Trump has been both a frequent filer and a target of fraud and defamation claims, and the suit adds to a list of legal baggage he will carry from the White House, including investigations by New York state and allegations by his niece Mary of business and tax fraud.

Trump won the dismissal of a claim by adult-film actress Stormy Daniels, who said that he defamed her when he suggested she had lied about being threatened to keep quiet about their alleged relationship. Still pending against Trump are defamation lawsuits brought by author E. Jean Carroll, who has accused Trump of sexually assaulting her in the 1990s, and by former “Apprentice” contestant Summer Zervos, who also alleges that Trump sexually assaulted her.

Defamation suits are hard to win. Maryland law requires a private individual to show that a statement was false and made negligently, and public officials to prove with convincing evidence that a defamatory statement was knowingly or recklessly false.

However, some courts have historically found that falsely accusing a person of treason is self-evidently injurious to an individual’s reputation and livelihood, lowering the bar to jury trial or damages.

At the same time, defendants can assert that a statement was made jokingly, qualifies for First Amendment protections for “fair comment” on matters of public interest, or furthered a greater public interest.

Trump appointed Krebs to the post of undersecretary for the National Protection and Programs Directorate at DHS in 2018.

That led to his duties overseeing CISA, a position he held as the 2020 presidential election approached. Krebs set out to work with state and local officials, improving election system resilience to guard against cyberattacks, according to the lawsuit. He helped set up CISA’s “Rumor Control” website to provide election facts and counter disinformation.

Within hours of the polls closing, Trump picked up on pre-election statements that Democrats were out to steal the vote. “We will never let them do it,” he tweeted.

But as such statements from Trump, his campaign and his supporters only grew, Krebs and CISA wouldn’t go along. The statement refuting such claims included this not-so-subtle jab at those making allegations of widespread election fraud: “While we know there are many unfounded claims and opportunities for misinformation about the process of our elections, we can assure you we have the utmost confidence in the security and integrity of our elections, and you should too. When you have questions, turn to elections officials as trusted voices as they administer elections.”

Such statements had to be dealt with, according to Krebs’s lawsuit, which accuses the Trump campaign, deGenova and Newsmax with conspiring to fight back.

“The plan included an agreement among the conspirators to discredit and defame dissenting Republicans by labeling them as “traitors,” “cowards,” “liars,” or similar terms to retaliate against them directly, and to chill others from speaking out against the conspirators’ chosen narrative,” the court documents state.