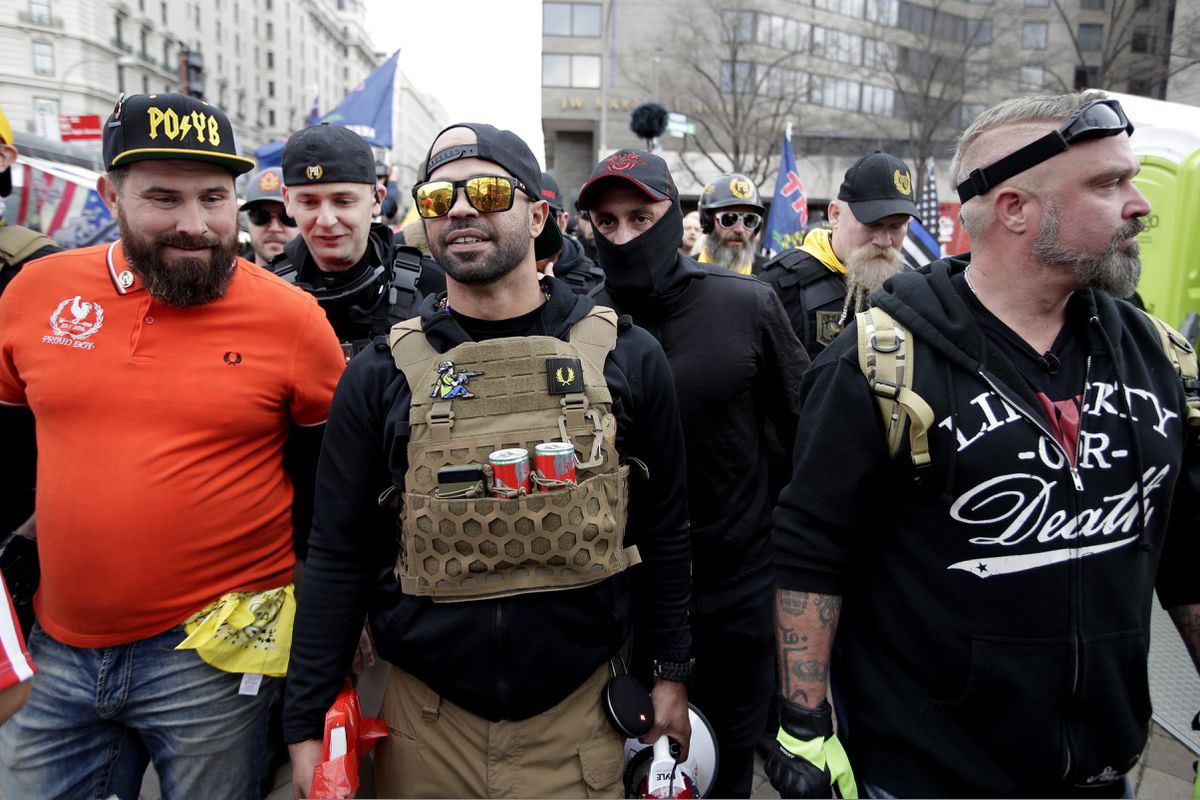 Supporters of President Donald Trump who are wearing attire associated with the Proud Boys watch during a rally at Freedom Plaza, Saturday, Dec. 12, 2020, in Washington. (AP Photo/Luis M. Alvarez)

Supporters of President Donald Trump who are wearing attire associated with the Proud Boys watch during a rally at Freedom Plaza, Saturday, Dec. 12, 2020, in Washington. (AP Photo/Luis M. Alvarez)

WASHINGTON - Thousands of maskless rallygoers who refuse to accept the results of the election turned downtown Washington into a falsehood-filled spectacle Saturday, two days before the electoral college will make the president’s loss official.

In smaller numbers than their gathering last month, they roamed from the Capitol to the National Mall and back again, seeking inspiration from speakers who railed against the Supreme Court, Fox News and President-elect Joe Biden. The crowds cheered for recently pardoned former national security adviser Michael Flynn, marched with conspiracy theorist Alex Jones and stood in awe of a flyover from what appeared to be Marine One.

“There he is! There is our guy!” a woman exclaimed, reaching toward the sky.

After railing on Twitter about the failure of his most recent attempt to overturn the election results, President Trump praised the crowd that gathered in his honor, tweeting “Wow! Thousands of people forming in Washington (D.C.) for Stop the Steal. Didn’t know about this, but I’ll be seeing them! #MAGA,” he wrote.

Later in the day, attention was focused not on the president but on a group he once told to “stand back and stand by”: the Proud Boys, a male-chauvinist organization with ties to white nationalism. In helmets and bulletproof vests, hundreds of men in their ranks marched through downtown in militarylike rows, shouting “move out” and “1776!”

They seemed intent on intimidating onlookers and adopted a chant popular with counterprotesters: “Whose streets? Our streets.”

[In challenging his election defeat, Trump cements his control over the Republican Party]

But at night, the scene became violent. At least four people were stabbed near Harry’s Bar at 11th and F streets NW, a gathering point for the Proud Boys, a male-chauvinist organization with ties to white nationalism.

The victims were hospitalized and suffered possibly life-threatening injuries, D.C. fire spokesman Doug Buchanan said. It was not immediately clear with which groups the attackers or the injured might have been affiliated.

The attacks were an escalation after an evening of faceoffs that took place near Black Lives Matter Plaza, Franklin Square, Harry’s Bar and other spots downtown.

At first, officers in riot gear successfully kept the two sides apart, even as the groups splintered and roamed.

Members of the Proud Boys became increasingly angry as they wove through streets and alleys, only to find police continuously blocking their course with lines of bikes.

“Both sides of the aisle hate you now. Congratulations,” a Proud Boy shouted at the officers.

But before long, the agitators determined to find one another were successful - and posturing quickly turned into punching, kicking and wrestling.

Again and again, officers swarmed, pulling the instigators apart, firing chemical irritants and forming lines between the sides. At Harry’s Bar, an ambulance arrived, but the extent of injuries was unknown.

Each time a fight was de-escalated, another soon began in a different part of town.

District Police Chief Peter Newsham made a brief appearance in the chaos, telling protesters: “We’re doing the best we can.”

In an interview, Newsham said police units were deployed across downtown to keep the groups apart. He said smaller segments of people who splintered from larger gatherings seemed “intent on conflict.”

At least six people were arrested during Saturday’s daytime demonstrations, in addition to five arrests that followed a Friday night brawl. More arrests were made into Saturday night, but a tally was not available.

The scuffles seemed poised to continue late into the night, as black-and-yellow-clad Proud Boys knocked back beers, whiskey and White Claw hard seltzers. Some stole a Black Lives Matter banner, paraded it down M Street NW, then stomped on it.

The tension came as most of the day’s earlier rallygoers were on their way home or to hotels, after spending hours cheering for election fraud claims that have been disputed or debunked. The majority-White crowd ranged from gray-haired men and women in red hats to children in wagons, one of whom chanted “100 more years!”

As the nation watches Biden’s transition, rising coronavirus cases and vaccine development, many have tuned out Trump’s attempts to maintain power. But to his most dedicated supporters, the president’s megaphone is as loud as ever. He has continued to falsely claim the election was stolen from him, prompting his faithful to return to the nation’s capital.

Flynn appeared on the steps of the Supreme Court to encourage them to maintain hope, despite the justices’ dismissal Friday night of Trump’s long-shot bid to overturn election results.

After Flynn finished speaking, he was chased by shouting admirers who cheered: “We love you, general!” Bodyguards tried to keep the fans at bay as Flynn kept smiling.

The speakers painted a picture of a country in a battle between good and evil, in which God himself would ultimately ensure Trump remained in power. Sebastian Gorka, a former foreign policy adviser to Trump, said that when he heard the Supreme Court had dismissed an election case from Texas on Friday night, he told himself to “stop, take a deep breath, count to 10, read the Bible and pray.”

“We, thanks to our lord and savior, have already won,” Gorka claimed.

A priest featured on a Jumbotron prayed to “place thyself at the head of this army of thy children.”

Ruth Hillary, 58, a pastor from California, listened while holding up her “Stop the Steal” sign. She said she will continue to protest as long as the president and vice president believe she should.

“If President Trump accepts it and Vice President [Mike] Pence accepts it, then we will accept it,” she said. “But right now, this is a Godly protest.”

Jones, the Infowars host known for his denial of the Sandy Hook massacre, alternated between speaking about God and the future president: “Joe Biden is a globalist, and Joe Biden will be removed one way or another,” he said from a stage on the National Mall.

Trump backer and MyPillow founder Mike Lindell argued that “Fox [News] was in on it,” while podcaster David Harris Jr. riled the crowd by suggesting that if there were a civil war, “we’re the ones with all the guns,” he said.

All day, the masses nodded along to falsehoods, prayed for the country and cheered beside one another without masks.

District police did not enforce mask rules or issue fines to those who ignored social distancing guidelines, even as the region faces an unprecedented spike in coronavirus cases.

Dozens of District police officers have tested positive in the weeks since the last pro-Trump rally in November. As of Friday, 94 remained in quarantine. Police have declined to draw a direct link between demonstrations and the spike in infections among officers.

On Saturday, local activists were frustrated with police tactics aimed at maintaining peace. For part of the evening, officers formed intermittent blockades at the perimeter of Black Lives Matter Plaza, essentially penning in counterprotesters while Trump supporters were free to roam.

“They can move around however they please,” said Constance Young, 37. “We’re not the ones not wearing masks and spreading covid.”

District residents have expressed concern that the influx of maskless protesters puts the entire city at risk, especially workers in restaurants and hotels. Activists flooded the inboxes of city officials, asking them to shut down businesses that allow people to congregate without masks. They called hotels to ask that they refuse to host those planning to attend Saturday’s rallies, with little success.

Protesters still came in from around the country, with family, friends and flags in tow.

David Dumiter, 33, and his niece Monica Stanciu drove eight hours from Dearborn, Mich., to be at the Washington Monument on Saturday.

Dumiter, an airplane mechanic who said he has been unemployed since the pandemic decimated air travel, said he knew the Supreme Court had blocked any legal path to reverse the results of the election. That didn’t change his mind about showing up Saturday. The president was still pushing, so he would, too.

“We’re not going to cave in,” Dumiter said. He walked down the National Mall in his Trump hat, Trump sunglasses and Trump jumpsuit, still gripping his flag.