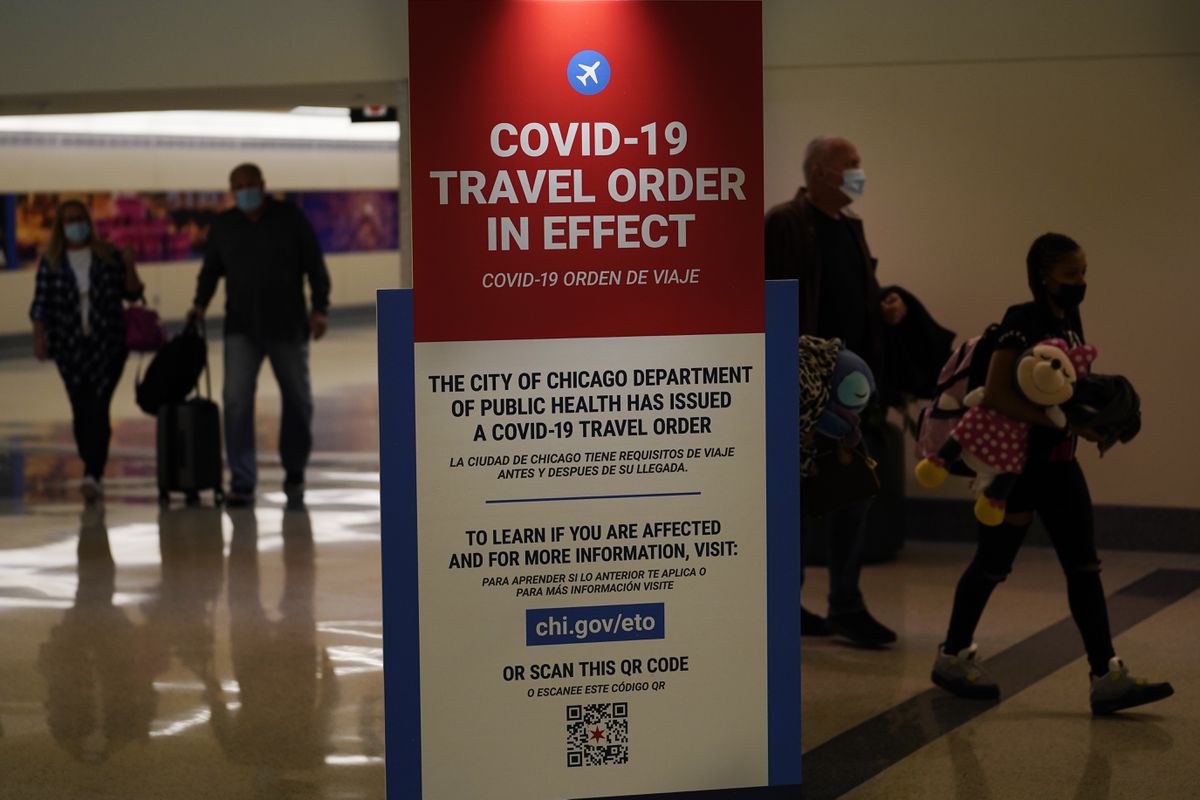 FILE - In this Nov. 24, 2020 file photo, air travelers arriving at Midway Airport in Chicago are reminded of the city's COVID-19 travel orders. More than 1 million people have passed through U.S. airport security checkpoints in each of the past two days in a sign that public health pleas to avoid holiday travel are being ignored, despite an alarming surge in COVID-19 cases. (AP Photo/Charles Rex Arbogast, File)

FILE - In this Nov. 24, 2020 file photo, air travelers arriving at Midway Airport in Chicago are reminded of the city's COVID-19 travel orders. More than 1 million people have passed through U.S. airport security checkpoints in each of the past two days in a sign that public health pleas to avoid holiday travel are being ignored, despite an alarming surge in COVID-19 cases. (AP Photo/Charles Rex Arbogast, File)

WASHINGTON - The new, mutation-laden variant of the coronavirus that has been spreading rapidly in the United Kingdom may already be circulating in the United States and other countries, leading infectious-disease experts said Monday.

There is no evidence that this variant causes more severe illness from covid-19, the disease that can be caused by the novel coronavirus. And scientists do not know with certainty whether this variant, officially known as B.1.1.7, is truly more transmissible. But it has the appearance of being so.

“We don’t know that for absolutely certain, but it is reasonable to assume that is going on,” Anthony Fauci, director of the National Institute of Allergy and Infectious Diseases, said Monday.

“Nor is there any indication that the mutation would interfere with the response to the vaccine,” Fauci added. “Having said all of that, when you’re dealing with mutations you have to follow them very closely and don’t take them lightly.”

The appearance of a coronavirus variant - which experts are so far not describing as a functionally distinct “strain” - has generated a host of travel bans among nations hoping to limit import of the virus from the United Kingdom. This variant and another one identified in South Africa that contains a similar mutation have generated ominous headlines at a moment when positive news about vaccines had offered hope that the end of the pandemic could arrive in the not-too-distant future.

Several top infectious-disease experts said Monday that the variant may not have originated in the United Kingdom. Instead, it may have been identified there first because the United Kingdom has a robust monitoring system that has examined tens of thousands of genomic sequences of virus samples.

The United States has lagged in sequencing and does not have nearly the same level of virus surveillance.

“It may very well be here. It may have even started here. The sequencing in the U.S. is so sporadic,” said Jeremy Luban, a virologist at the University of Massachusetts medical school.

“It makes sense that it was detected first in the U.K., because they have probably the world’s best surveillance program. It would not shock me at all to find out that it also is circulating in the U.S.,” said Angela Rasmussen, a virologist at the Georgetown Center for Global Health Science and Security.

She added that the coronavirus already in the United States is spreading easily, and that a new variant will not change the need for people to follow public health guidance. A travel ban affecting flights from the United Kingdom might make little difference, she said.

“I don’t think a travel ban is going to be particularly helpful. We already have out-of-control transmission of all the variants that are circulating in the U.S. here,” she said.

Fauci said: “It very well might be here for all we know. That’s why we have a system to do surveillance.”

Throughout the country, public health and elected officials grappled with how to respond to the new variant while seeking to calm public nerves just as a mass vaccination campaign gets underway.

New York Gov. Andrew Cuomo, a Democrat, called on the federal government to halt flights from the United Kingdom, citing decisions by several European countries to do so and the unknowns about the new strain. In the absence of federal action, he said he had taken a step within his power: Asking the three airlines that fly from the United Kingdom into New York - British Airways, Delta and Virgin Atlantic - to require all travelers to test negative before boarding. British Airways and Delta agreed and will begin to do so Tuesday, Cuomo said.

“I believe intuitively [the new variant] is already here . . . because if it’s been flying around the world, it will be here,” Cuomo said. “We learned this lesson the hard way, and we’re not going to go through it again. We have been victimized by federal incompetence and federal negligence, that is fact. And we are not going to be victimized again. . . . I believe my intuition is correct that this is another disaster waiting to happen.”

Across the Hudson River in New Jersey, officials seemed less alarmed. Asked why he had not attempted to restrict travel from Britain, Democratic Gov. Phil Murphy said: “I think the science around that is still to be determined.” He added that the state was discussing the matter with the Port Authority of New York and New Jersey, which oversees airports in the region, including Newark Liberty International Airport.

Christina Tan, New Jersey’s epidemiologist, noted that viruses frequently mutate and that there is no evidence to suggest that the variant would affect vaccination efforts. The main takeaway, she said, was that people should avoid travel that is not essential. “Whether you have concerns about a new variant from the U.K. versus a hotspot from another part of the country, does it really matter?” Tan said.

Canada issued a 72-hour ban on flights from the United Kingdom on Sunday. Canada’s minister of transport, Marc Garneau, said the move “will reduce the public health risks to Canadians.”

According to the latest figures from the U.S. Bureau of Transportation Statistics and aviation data firm Cirium, more than 13,600 passengers flew directly from the United Kingdom to the United States in June. That figure has continued to climb. Airlines for America, an industry advocacy group, said total passengers arriving from London’s Heathrow Airport topped 30,000 in November.

U.S. officials said that health authorities have been considering the best course, and that discussions are underway among senior level officials.

“CDC is following the situation closely and actively assessing the implications of the new variant and response options with respect to international travel,” the Centers for Disease Control and Prevention said in a statement.

Allison Arwady, commissioner of Chicago’s department of public health, said the new variant did not give her “major pause” and should not undermine the vaccine campaign.

“It still has the same crown, it still has the same spikes, there’s no major changes in any way that we would anticipate the vaccine would not be effective,” Arwady said. “It does not in any way affect us here in Chicago in terms of our planning or how the virus is behaving here. And, importantly, nothing about this at this point is concerning from a vaccine protection standpoint.”

In California, Democratic Gov. Gavin Newsom said his administration had been in discussion with airlines and “stakeholders” in the state about possible new quarantine and testing protocols for travelers arriving from the United Kingdom. He said he hoped “the federal government takes action in this space.”

He noted that researchers in California sequence 5,000 to 10,000 coronavirus samples a day and had seen no evidence of a new strain in the state.

Mark Ghaly, California’s health and human services secretary, described the variant as “a little bit more sticky than the covid virus that we’ve been seeing to date.” He said officials there are concerned “because of the unknowns” and will make recommendations about monitoring visitors from the United Kingdom and other affected areas.

“The last thing we want to do is let a new strain of covid come and spread more rapidly or easily across the state,” Ghaly said.

One place well-positioned to identify the new variant if it is in the United States is Houston, where scientists at Houston Methodist Hospital have produced 15,000 coronavirus sequences, according to hospital researcher James Musser. They have not seen it.

“That’s not to say that it won’t show up. But we do not have it now,” Musser said.

Musser notes that more than 8,000 people have been vaccinated at Houston Methodist, with an additional 2,000 receiving the vaccine every day. Musser is concerned that vaccinations will put “massive selection pressure” on the virus to mutate and to evade the immune response.

“We are at war with an enemy that we have so little intel on, that it’s just shocking to me,” Musser said.

Data from the GISAID Initiative, which provides a global database of coronavirus genomes, shows that the United States lags behind many countries in sequencing the virus, having sequenced 0.3% of the 17.8 million coronavirus cases that have emerged since the start of the year. Forty-four countries surpass that proportion. The United Kingdom has sequenced roughly 8% of its outbreak, ranking ninth in the world. Australia, Denmark, Gambia, Iceland, New Zealand, Taiwan and Vietnam have sequenced higher percentages of their outbreaks.

The emergence of the new coronavirus variant could serve as a wake-up call about the need for better surveillance of the virus, said Jeremy Kamil, a virologist at the Louisiana State University Health Sciences Center-Shreveport.

“The same kind of infrastructure that you’d want to monitor for all kinds of infectious-disease threats is what you’d want to have in place now, but we just don’t really have it in place,” Kamil said.

There have been many false alarms about dangerous mutations of the coronavirus, starting early in the pandemic. But a number of scientists who have been skeptical about reports of mutations are saying this new variant - the existence of which was announced Dec. 14 in the House of Commons - looks like a truly more transmissible version of SARS-CoV-2, the novel coronavirus’s technical name.

They note that it is defined by not just one but 17 mutations that popped up together and were first seen in a sample in September. There is no definitive scientific proof that this variant’s rapid spread in recent months is directly driven by the mutations. But they said the mutations are suspicious.

Eight affect the spike protein on the virus’s exterior. The mutations may be helping the virus bind more easily to human receptor cells, scientists said.

“My hunch is that it probably does have some kind of transmission advantage just because it did become so prevalent so quickly,” Rasmussen said.

“The preliminary data is strongly suggesting that it is spreading more easily,” Kristian Andersen, an immunologist at Scripps Research, said in an email Monday. “We need to act as if the lineage is indeed spreading more easily as we cannot afford to hope that it’s not and then be wrong about it.”

Even though the appearance of this variant is concerning and will require close surveillance, it is unlikely to undermine the vaccination program, said William Hanage, an epidemiologist at Harvard University’s T.H. Chan School of Public Health.

“The vaccine is a pretty thorough thing,” Hanage said. “Whether or not the existing vaccines are less effective against B.1.1.7 is at the moment not known. I think there is good reason to think they will not be severely impacted.”

The Washington Post’s Harry Stevens contributed to this report.