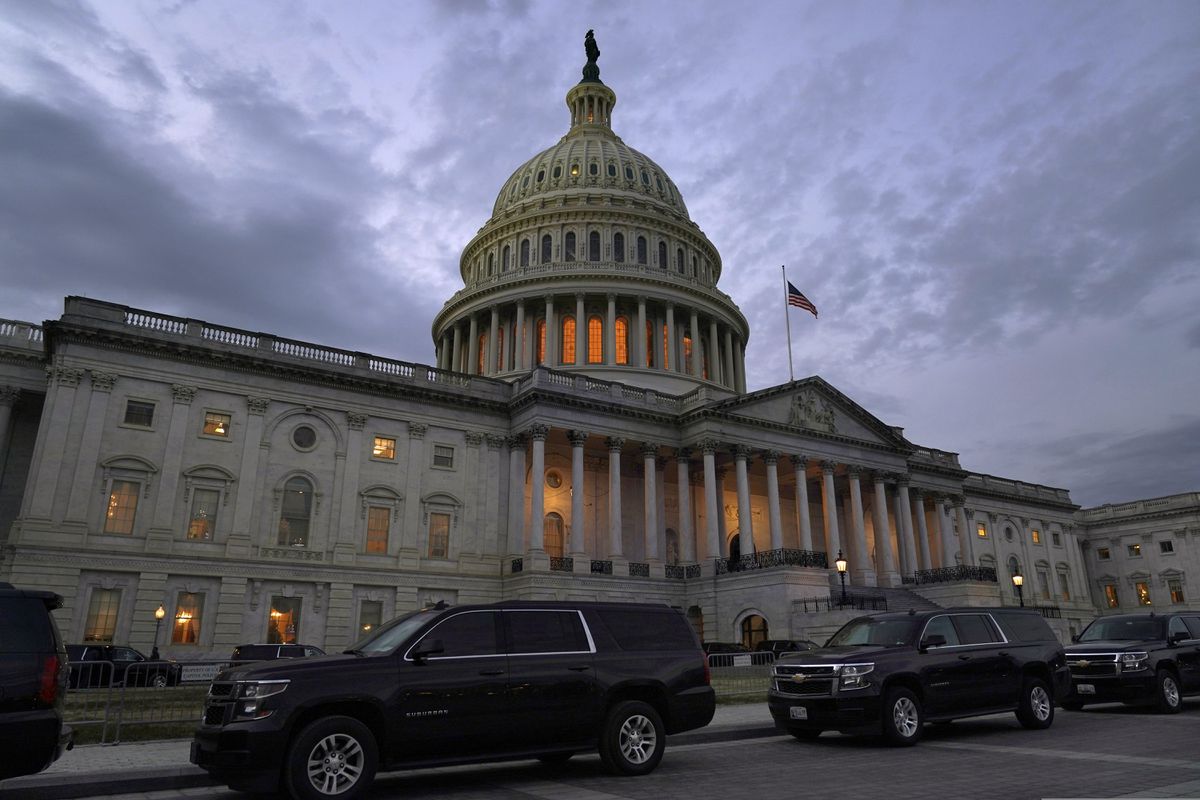 Dusk falls over the Capitol, Monday, Dec. 21, 2020, in Washington. Congressional leaders have hashed out a massive, year-end catchall bill that combines $900 billion in COVID-19 aid with a $1.4 trillion spending bill and reams of other unfinished legislation on taxes, energy, education and health care. (AP Photo/Jacquelyn Martin)

Dusk falls over the Capitol, Monday, Dec. 21, 2020, in Washington. Congressional leaders have hashed out a massive, year-end catchall bill that combines $900 billion in COVID-19 aid with a $1.4 trillion spending bill and reams of other unfinished legislation on taxes, energy, education and health care. (AP Photo/Jacquelyn Martin)

WASHINGTON - Congress on Monday unveiled a 5,593-page spending bill and then voted on it several hours later, with lawmakers claiming urgent action was needed to rescue an ailing economy ravaged by the coronavirus pandemic.

But tucked in the bill was over $110 billion in tax breaks that strayed far from the way the bill was marketed to many Americans. These giveaways include big tax cuts for liquor producers, the motorsports entertainment sector and manufacturers of electric motorcycles.

These measures, added onto the broader spending bill, are known as “tax extenders” - tax breaks targeted at specific, sometimes niche industries. And routinely extending these “temporary” measures has become something of a year-end tradition, despite loud complaints from some lawmakers who allege the votes largely benefit special-interest groups who stand to gain financially from the outcome.

These tax extenders are designed to be temporary but are frequently renewed, often at the urging of industry lobbyists, and done so during late-night votes at the end of the year. (The Senate vote Monday took place shortly before midnight.) The Joint Committee on Taxation estimated the extenders benefiting industry and special interests included in the stimulus bill would cost over $110 billion over 10 years.

Tax experts and good governance advocates have criticized such short-term tax relief extensions, arguing they hide the true cost of the cuts and advantage industries with the most well-connected lobbyists.

“They are a gravy train for members and lobbyists, who repeat the same exercise every year or two,” Howard Gleckman, a tax policy expert at the Urban Institute, said in an email. “The lobbyists get to keep billing hours. The members get campaign money from the same people. Many of these are classic special interest tax breaks that do not benefit the overall economy in any way.”

The federal government collected $3.4 trillion in taxes in the 12 months that ended Sept. 30, but it typically allows more than $1.5 trillion in annual tax breaks, according to the Committee for a Responsible Federal Budget. Some of these are locked into the tax code. Others, however, were initially designed to last only a year or two but continue winning extension after extension because of intense lobbying.

President-elect Joe Biden has been critical of the plethora of tax giveaways, but he will find that both Democrats and Republicans have been steadfast in their supportive of certain tax breaks. And to win passage each year, the tax breaks are bundled together into one package for votes to draw maximum support.

The enormous new bill packages together emergency economic relief, government funding and tax cuts. The economic relief component of the bill is worth around $900 billion. The legislation included a slew of provisions that had nothing to do with coronavirus relief or funding the government, including many of the tax extenders.

One measure, for instance, makes permanent a cut in excise taxes for producers of beer, wine and distilled spirits, which first became law in 2017 as part of the Republican-led tax cut package. The cuts were due to expire without congressional action, and the alcohol industry had pushed hard for their renewal, arguing that their businesses had been decimated by the pandemic. The industry has supporters among both Democrats and Republicans in Congress, who in turn pushed their leaders to include a bill making the cuts permanent “in the next appropriate legislative package.”

“I wrote this law for one purpose: to help small brewers and wineries and everybody in this space because the rules, the regulations, and the taxes were practically from Prohibition,” Sen. Ron Wyden, D-Ore., said in an interview.

The excise tax cut has won praise in some corners. An analysis by the Progressive Policy Institute published last month argued that the cut helped fuel an expansion in brewery employment, a rare bright spot amid overall U.S. manufacturing decline.

Another extension, of a tax credit aimed at helping the wind industry, sparked impassioned speeches Monday night as the Senate debated the bill. Sen. John Hoeven, R-N.D., introduced an amendment to strip the credit from the bill and was backed by Republican colleagues Kevin Cramer of North Dakota and James Lankford of Oklahoma. They argued that the credits benefit a mature industry that doesn’t need the extra help, and that its benefits and harms had not been fully debated by lawmakers.

Lankford said the wind production tax credit was a “zombie” that legislators had agreed years ago should be ended, only for it to be resurrected by lobbyists. Cramer called the credit a “market-destroying atrocity,” and called for an end to all tax extenders.

“Let them all expire,” Cramer said. “K Street wouldn’t like it, but it would be one less section in this giant package,” he said, referring to lobbyists.

The American Wind Energy Association, the trade group for the wind industry, pushed back on the criticism.

“We are surprised that wind energy was singled out amid a federal tax landscape that currently includes support for all types of energy sources,” said Bree Raum, the trade group’s vice president of federal affairs. “Wind energy provides significant economic benefits to America’s heartland, with states like North Dakota and Oklahoma generating over a quarter of their electricity from this clean energy resource.”

Hoeven’s amendment was ultimately not approved.

Another extension benefits the motorsports entertainment industry, such as NASCAR, by allowing for the faster write-down of costs related to their complexes. That provision, which has appeared in prior legislation going back to 2004, helps those companies lower their overall tax bills and has now been extended until 2025.

A spokesman for NASCAR, which has lobbied Congress on the extension, did not respond to a request for comment.

Another extender grants a tax credit to buyers of “two-wheeled plug-in electric vehicles” - that is, electric motorcycles. That credit is worth 10% of the cost of the motorcycle, up to $2,500. Manufacturers of the bikes, such as Energica and Zero, advertise the tax credit on their websites.