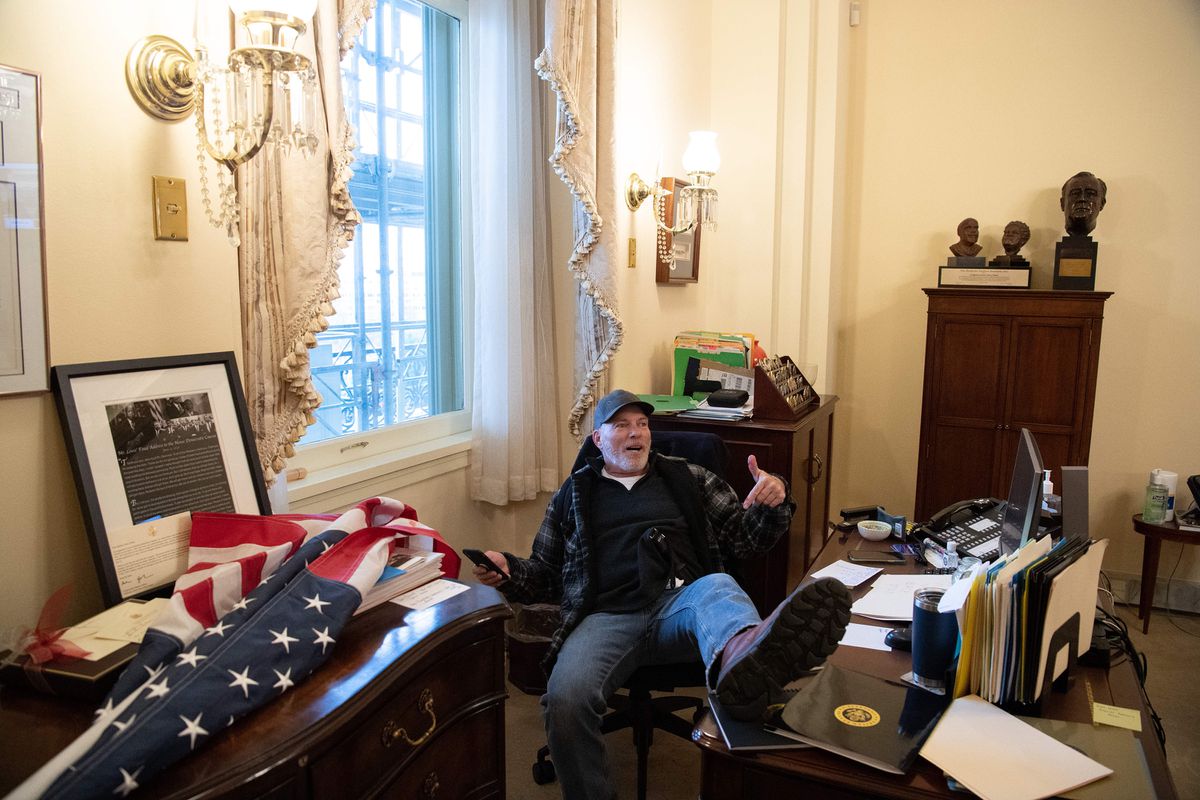 A man identified as Richard Barnett sits inside the office of U.S. Speaker of the House Nancy Pelosi during an invasion by extremists inside the U.S. Capitol in Washington, D.C., on Wednesday, Jan. 6, 2021. (Saul Loeb/AFP/Getty Images/TNS)

A man identified as Richard Barnett sits inside the office of U.S. Speaker of the House Nancy Pelosi during an invasion by extremists inside the U.S. Capitol in Washington, D.C., on Wednesday, Jan. 6, 2021. (Saul Loeb/AFP/Getty Images/TNS)

“I am white. There is no denying that. I am a nationalist. I put my nation first. So that makes me a white nationalist,” Barnett wrote on page he maintained under a pseudonym, before adding that people who were not nationalists should “get the f--- out of our nation.”

Just four days later, Barnett was photographed sitting with his feet up on a desk in Pelosi’s office at the U.S. Capitol - an image that quickly became emblematic of the chaotic storming of the complex by a pro-Trump mob.

Barnett, who is 60 and goes by the nickname “Bigo,” identified himself as the intruder in Pelosi’s office to New York Times reporter Matthew Rosenberg later on Wednesday, according to a post on Twitter by Rosenberg.

Barnett also confirmed his involvement to the Arkansas television station 5News. Barnett, who was photographed outside the Capitol holding an envelope he said he removed from Pelosi’s office, said he had taken the envelope because he had bled on it. “I put a quarter on the desk because I’m not a thief,” he told 5News.

Calls on Wednesday evening to a cellphone number registered to Barnett were routed to a voice mail account that was not accepting messages.

Barnett is a President Donald Trump supporter and gun rights advocate who has repeatedly shared false claims via social media that the election was stolen, according to a review of two Facebook accounts tied to Barnett. In one post, Barnett falsely asserted that there were “mountains of evidence” of voter fraud.

One of the Facebook accounts, in Barnett’s name, was locked or removed from the social media site Wednesday evening. Another account, named “George Reincarnated Patton” after the World War II general, was locked or removed Thursday morning. The Post was able to link the latter account to Barnett because the profile picture depicted Barnett and the page contained a selfie of Barnett as well as a post he had signed using his real name. In addition, a post on the “Patton” account last Saturday urged his friends to shift to the account in Barnett’s real name. “Tired of double posting,” it said.

In a Dec. 28 Facebook post on the Patton page, Barnett announced he would be attending Wednesday’s rally and urged fellow Arkansans to make sacrifices to join him there. “This is OUR COUNTRY!!!,” he wrote. “Can you give one day from the Internet or work or whatever to be active.” He added, “Get the f--- up people. Please STAND!!! If not now, when?”

In the post, Barnett expressed disappointment that past political events he had attended had attracted only a “small handful” of people. Ten days earlier, he had posted photographs of himself and a few others protesting the election result outside the Capitol building in Little Rock, Ark. Barnett posed for one picture holding a rifle.

In a separate post the same day, Barnett wrote that he “came into this world kicking and screaming, covered in someone else’s blood,” adding, “I’m not afraid to go out the same way.” The post was accompanied by a selfie of Barnett with a rifle strapped to his chest. He was wearing a polo shirt bearing on one sleeve a pro-police “Blue Lives Matter” flag logo.

Barnett later shared a link to a speech that Vice President Mike Pence gave on Dec. 22 to a conservative group’s convention in West Palm Beach, Fla., at which Pence pledged “to keep fighting until every illegal vote is thrown out.”

Barnett has organized fundraising events for the police department in Sulphur Springs, Ark., near Gravette, according to his Facebook accounts and an October article in the Westside Eagle-Observer newspaper. The article said Barnett presented the department with a check to fund the purchase of body cameras for officers after raising money at a “Back The Blue” rally and auction.

Sulphur Springs police chief Jarod Morgan, who was photographed by the newspaper accepting the check from Barnett, did not respond to messages on Wednesday evening.

Also in October, Barnett helped to raise more than $1,000 for “Save Our Children,” an anti-child-trafficking campaign, according to another article in the Eagle-Observer. Facebook limited the use of the national campaign’s hashtag because it found that content tied to the campaign was associated with the QAnon conspiracy theory, which entails false allegations about child abuse among the global elite.

Online in recent weeks, Barnett has shared numerous conspiracy theories about the coronavirus pandemic and the vaccines being used to combat it. He has railed against mask requirements, complaining in one post that he was denied service by a food truck.

Amid the gripes about the pandemic and the election, Barnett posted to his Facebook page a video of people arriving for Wednesday’s rally.

“It’s early folks, but we’re coming together,” said a voice narrating the clip. “Get ready for the party.”