Far-right extremists want to target more capitols, but are divided after DC riot 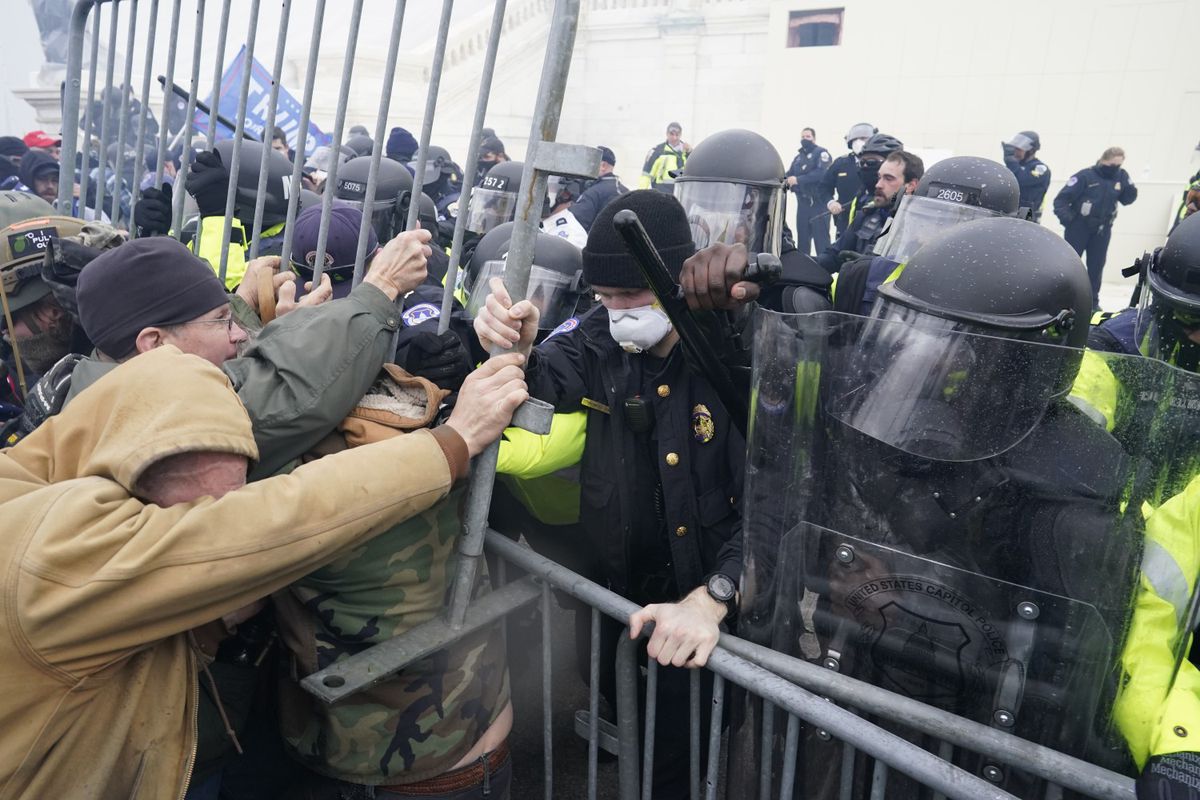 Protesters attempt to force their way through a police barricade in front of the U.S. Capitol as Congress worked Wednesday, Jan. 6, 2021, to finalize the Electoral College votes in Washington, D.C. (Kent Nishimura / Los Angeles Times/TNS)

Protesters attempt to force their way through a police barricade in front of the U.S. Capitol as Congress worked Wednesday, Jan. 6, 2021, to finalize the Electoral College votes in Washington, D.C. (Kent Nishimura / Los Angeles Times/TNS)

Josiah Colt was all bravado on his way to Washington this week to protest what he saw as a stolen election.

“Ready for any battle,” the Boise, Idaho, man wrote on Facebook after waking up in Memphis, Tennessee, to find that a “fellow patriot” had posted a photo of him clutching a handgun while sleeping. His friend wrote that Colt was “ready for the boogaloo,” a far-right term for a violent overthrow of government.

In a video he recorded Wednesday after storming the U.S. Capitol, Colt, 34, was breathless with excitement after sitting in what he believed was House Speaker Nancy Pelosi’s chair — actually the Senate chamber seat reserved for the vice president. He was later identified as the man jumping to the Senate floor from the gallery in a widely circulated photo.

But a short time after sitting in that chair, in agitated tones outside the ransacked building, he voiced misgivings.

“I’m sitting here, and I don’t know what to do,” Colt told his social media followers on video. “I’m all over the news now, but like, I’m just like every single one of those people that was marching — a peaceful protest, came here to represent America. You know, I didn’t hurt anybody in there.”

Colt’s amalgam of swagger and regret reflects the dichotomy inside the insurrectionist movement that is newly emboldened after storming the Capitol on Wednesday, but is also fractured, in part, because of its leaders’ loose grip on reality. Hours after the free-for-all, those on the far right took to social media, urging the like-minded to bring the fight to state capitols nationwide. Calls came to arm themselves for an assault on Washington and state capitols on Jan. 17, and again in Washington two days later, before President-elect Joe Biden’s inauguration.

At the same time, insurrectionists posting on Parler and other social media seemed torn about whether to champion their sacking of the Capitol or blame it on antifa, one in a string of conspiracy theories the movement has embraced. Some adherents depicted Ashli Babbitt, the San Diego woman killed in the melee, as a martyr for the cause. Others suggested she was an antifa plant — and claimed that no Trump supporters were involved in the ransacking.

“For the core participants and members of the far right, this has been a great success. This has been a milestone in their fight against these windmills, these alleged enemies of America,” said Arie Kruglanski, a psychology professor at University of Maryland and an expert in extremism. “On the other hand, it’s going to discourage those who aren’t quite as committed.”

As the country struggles to understand what a day of political violence and home-grown extremism means for its future, supporters of a lame-duck president who once claimed to be united by patriotism find themselves divided by its meaning. Some view the day as the launch of a necessary revolt, with more to come — including the potential for more violence — while others, like Colt, show some signs of remorse.

In this multifactioned and increasingly radical political tribe, there is even a sense of betrayal that a crusade that seized on an agenda of conservative righteousness and law and order would turn to rioting and brute force. This comes despite months of clashes, attacks and domestic terror plots — including a plan to kidnap the governor of Michigan — that provided ample warning of what lay ahead.

“Radicalization is now the mainstream of American politics, and we do our country a disservice to understand it any other way,” said Eric Ward, an extremism expert with Southern Poverty Law Center and Western States Center. “It’s is no longer on the fringes of society.”

While many in this offensive still believe in election fraud, Wednesday’s events have left them disowning compatriots who ransacked, pillaged and injured dozens of law enforcement officers — including allegedly beating U.S. Capitol police officer Brian Sicknick with a fire extinguisher, resulting in his death — while still clinging to right-wing ideals.

Members of several far-right groups, including the Proud Boys, Oath Keepers and Three Percenters, were present. The name of right-wing YouTube channel Murder the Media was scrawled on a door of the Capitol during the siege. Federal authorities Friday announced charges against 13 of the rioters, and 40 more have been charged in Superior Court on counts including firearms-related offenses.

“Were there Trump supporters up there? Absolutely. But they don’t understand what it means to be a patriot,” Kimberly Fletcher, founder and president of the national nonprofit Moms for America, said of those protesters who committed violent acts Wednesday.

“That wasn’t the majority of the people who were there. That was just a minority who were stupid,” Fletcher said.

She traveled from Omaha to join Wednesday’s rally with thousands of other members of her group bused in from across the country. They had mobilized get-out-the-vote efforts in eight swing states before the election, then fielded angry inquiries from members about recounts and alleged vote fraud. Fletcher said Wednesday’s rally was largely peaceful, with flag waving, national anthem singing and praying, until the crowd swarmed the Capitol “like bees.”

One man asked her, “Where’s the breach?” she said. She told him people were not supposed to go inside. Fletcher discouraged others from climbing the scaffolding, she said, but, “They were not listening to me.”

Faced with the ugliness of Wednesday’s mob, some Trump supporters are once again latching onto conspiracy ideas to help cleanse the movement of responsibility.

Jessica Teachout, a conservative activist from Houston, attended the rally but didn’t enter the Capitol. She blames antifa for the violence.

“That’s exactly what these professional rioters do,” she said. “We had people dressed up as MAGA supporters. They went in there.”

Leigh Dundas, a California human rights lawyer who has been a leader in organizing protests at the state Capitol against coronavirus shutdowns, was also in front of the national Capitol Wednesday. She saw flash-bang grenades launched at the crowd by law enforcement and people running across the lawn toward the Capitol building, she said. But she also does not believe it was those in her political camp that entered.

“It was very much like a staged production,” she said Thursday, waiting for a flight home at the Ronald Reagan National Airport. “I do believe it was people masquerading as Trump supporters.”

There was no confirmed evidence to back such claims, but Trump supporters have circulated photos on social media purporting to show known antifa activists inside the Capitol.

One image shows Colt, the Idaho man who got into the Senate chamber, raising his fist — which some Trump supporters describe as a leftist gesture. Another image of Colt dangling from the Senate balcony appeared Friday on an FBI post seeking information about his identity.

Colt, who describes himself online as a digital-marketing director at Funnel Craft, a Boise internet advertising company, who likes skydiving, guns, food and family, did not respond to emails or calls.

On Thursday, likely facing charges, he issued an apology to the CBS 2 Boise television station, saying he recognized his actions “have brought shame upon myself, my family, my friends and my beautiful country. My intention wasn’t to put a stain on our great country’s democratic process.”

Brian Brooks, who described himself as having attended high school with Colt in a social media post, wrote that Colt was “not some double-agent antifa person, like many are suggesting. He’s just a guy radicalized slowly by four years of lies, propaganda, dog whistles, gaslighting and conspiracy theories.”

Despite competing realities, there is little argument about what happens next: more of the same. Both those on the radical right fringe espousing violence and those more mainstream plan on continuing the upheaval that marked 2020.

But Brian Levin, director of the Center for the Study of Hate & Extremism at California State University, San Bernardino, said that with President-elect Joe Biden in the White House, Trump will no longer be able to so widely project his views.

That may leave regional leaders to fill the gap — many of whom have moved their messaging to social media platforms outside the mainstream, a switch that will allow them to focus on true believers, Levin said, but also limit their recruiting.

“They already have their own ecosystem,” he said. “They aren’t going to be able to grow it more the way they did when they had unfettered access to Facebook and Twitter.”

For months, as the pandemic boiled over with its inequities and economic devastation, conservative groups with different causes — including the closure of schools and businesses, church restrictions and opposition to the defund-the-police movement — have both grown and cross-pollinated, united by anger at government. Online forums ballooned by millions of members, and turnout at rallies drew crowds from all of those groups willing to join together for a perceived greater good.

As Trump leaves the White House this month, it remains to be seen what will become the energy of conservative protesters who feel even more disenfranchised.

In California, those causes have revolved around the anti-vaccination movement, which has grown its message in recent months to advocate for small businesses, ending public health restrictions and leading firearms training for women in a “moms militia” movement.

California’s leading anti-vaccine group, the Freedom Angels, spoke at Wednesday’s rally in Washington, echoing the language of the far-right.

“We are here to recruit you,” said one of the group’s leaders, Denise Aguilar, in a video posted on social media while she spoke in front of the Supreme Court. “We are done with bills. We are done with newsletters. We’re done with emails. We are boots on the ground, and it’s our responsibility to take our government back.”

Dundas, the California lawyer who has worked closely with Freedom Angels, is clear she is not advocating for a revolution. But she is also adamant that, as the president said Thursday, his loss is not an end to the movement he has wrought. She believes activists energized by Trump will remain committed.

“I don’t think this is going away, and nobody I am sitting with in the Delta Sky Lounge right now does either. One way or another, whoever is leading the country is going to have to deal with the fact that people have lost faith.”

Dundas, who has crusaded to recall Gov. Gavin Newsom, said she expected that effort to continue to gain steam as more Californians suffer economically due to coronavirus restrictions. The longer the pandemic lockdowns remain, she said, the more likely people will be ready to vent anger like that displayed Wednesday.

“I think there is a correlation between how energetic the resistance is and how quickly the heat under the boiling frog is turned up,” Dundas said. “When you start affecting people’s kids and people’s livelihoods, they react fast.”

On Thursday, Teachout, the Houston activist, extended her stay in Washington and returned to the National Mall, undeterred by the previous day’s events.

“A lot of people were criticizing the patriots and condemning them,” she said in a Facebook video.

“We’re working with the deep state. These are treasonous, anti-American, communist dictators,” she said as she walked. “Did any American out there really think it was going to be this easy to take our country back?”