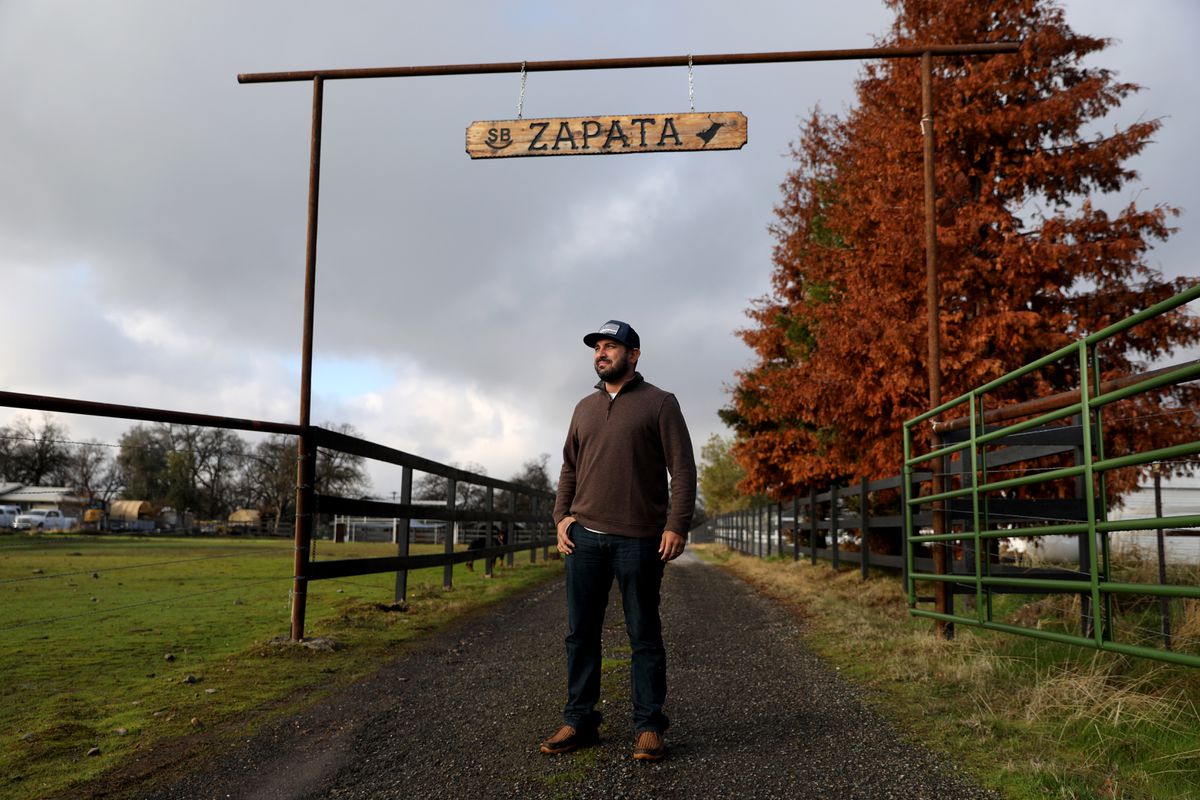 Carlos Zapata, 42, at his ranch in Palo Cedro, Calif. “We have to make politicians scared again,” he said. “If politicians do not fear the people they govern, that relationship is broken.” (Gary Coronado/Los Angeles Times/TNS)

Carlos Zapata, 42, at his ranch in Palo Cedro, Calif. “We have to make politicians scared again,” he said. “If politicians do not fear the people they govern, that relationship is broken.” (Gary Coronado/Los Angeles Times/TNS)

REDDING, Calif. —  The rebellion that took place inside a government building in rural Northern California happened the day before the violent siege of the U.S. Capitol by supporters of President Donald Trump.

The Shasta County Board of Supervisors had planned to meet virtually Jan. 5 because of an uptick in coronavirus cases. The supervisors’ chambers in Redding were closed. Seats had been removed. The public speakers’ microphone was disabled.

But, in protest, a newly elected supervisor unlocked the doors. In poured dozens of people, unmasked, to vent their fury. Three supervisors attending virtually watched from afar as threats flew amid the speeches.

“When Joe Biden’s long winter sets and the dark night comes in this country, do you think you’re going to get to see the dawn?” Timothy Fairfield, 44, of Shingletown asked the supervisors. “No, you will not. Flee now while you can. Because the days of your tyranny are drawing to a close, and the legitimacy of this government is waning.

“When the ballot box is gone,” he added, “there is only the cartridge box. You have made bullets expensive. But luckily for you, ropes are reusable.”

In some ways, the rhetoric in that officially closed county government facility carried a hint of the rage that would boil over 2,800 miles away when pro-Trump rioters stormed the U.S. Capitol the next day. Five deaths, including that of a U.S. Capitol Police officer and the police shooting of an Air Force veteran from San Diego County, have been linked to the siege.

Here in California’s rural, conservative northern counties — where people have long wanted to split from California and form a new state called Jefferson — the kind of anger and distrust of the government that Trump has fomented is on full display.

And it is not likely to go away any time soon, because some residents believe there is great political utility in making government officials believe that potential violence could become all too real.

“We have to make politicians scared again,” Carlos Zapata, who attended the supervisors’ meeting, told the Los Angeles Times. “If politicians do not fear the people they govern, that relationship is broken.”

That such tension is playing out in liberal California — which voted overwhelmingly for Biden and fought the Trump administration on immigration, climate change and myriad other issues — only signals that it is happening all across the country, locals say.

While watching the violence unfolding in Washington, Supervisor Leonard Moty, who attended the county meeting virtually, thought of the threats hurled at him and his colleagues the day before. Moty, a former Redding police chief, texted the Board of Supervisors’ chairman, asking how he planned to keep their meetings safe in the future.

“I definitely saw parallels in that,” Moty said in an interview. “I saw the possibility of that kind of behavior erupting in our county.”

Moty said residents have become more blatantly threatening toward government employees amid the pandemic. Some announced the home address of the county health officer, prompting police to do extra patrols in her neighborhood.

“It’s totally inappropriate,” Moty said. “Conducting the business of the county — the public can tell us we’re doing it wrong. They can tell us how we ought to do it. But they should never make threatening statements.

“This is by far the worst it’s been,” he added. “They politicized the virus. The pandemic. You saw a culmination of it by a president who incited a whole group of people to march to the Capitol and do bad things. I think we have a number of people in this county who follow his voice. Who knows what they will do?”

Among the president’s supporters in Washington last week were men carrying the yellow-and-green State of Jefferson flag with its pair of Xs, called a “double cross,” that represent a sense of rural abandonment.

As Moty watched the news with alarm, Zapata was keeping up with pro-Trump friends in the nation’s capital who, like him, believe the election was stolen.

“People say … ‘Oh, man, those people at the Capitol, they were violent. That’s un-American,’ " Zapata said. “I’m like, the most American thing they could have done is burn that ... down.”

In Shasta County, where Trump beat Biden by 33 percentage points, the supervisors’ meetings have become a prime venue for outrage. Accusations of treason and socialism are commonplace. So, too, is talk of revolution and civil war.

In August, Zapata — a 42-year-old Marine Corps combat veteran who served in Iraq and now owns the Palomino Room restaurant and bar in nearby Red Bluff — blasted supervisors for “muzzling” their faces with masks and said the closures and restrictions that have devastated small businesses are making families starve. His unplanned speech, in which he warned that “it’s not going to be peaceful much longer,” went viral.

The next month, a man in a Grim Reaper mask tried, unsuccessfully, to light a surgical mask on fire during public comments. Another man announced in October that he was placing all of the supervisors under citizen’s arrest; when his three minutes of speaking time were up, sheriff’s deputies escorted him out.

By December, coronavirus cases were climbing in Shasta County. At least three employees in the county administration building, which houses the supervisors’ offices and board chambers, tested positive, Moty said.

The supervisors voted 3-2 to hold virtual meetings as long as the county was in the most restrictive purple or red tiers in the state’s reopening plan.

But when Patrick Jones — a former Redding mayor who defeated an incumbent supervisor in the November election — joined the board this month, the tenor changed. The incumbent had supported virtual meetings. Jones, who campaigned on reopening the county, did not.

On Jan. 5, he showed up to his first meeting in person, along with one other supervisor, and welcomed the crowd inside.

From behind the counter at Jones’ Fort, the Redding gun store he manages where a giant Jefferson flag hangs on the wall, Jones said last week that facing heated comments was just part of an elected official’s job. There is a growing recall effort, he said, to oust his colleagues who did not come to the meeting in person.

“I don’t expect any violence here,” he said. “I know most of these people. They’re venting, getting some frustrations out.”

At the Jan. 5 meeting, a bespectacled mother who said her son had struggled amid school closures told supervisors that “civil war is brewing.”

Another mom in a MAGA hat — who held up a picture of the yellow Star of David that Nazis forced Jewish people to wear and compared it to pandemic mask orders — said she would fight in that civil war “because I’m not screwing around anymore.”

A 12-year-old boy said the restrictions had been “created by the left to scare people” and told the supervisors: “Please open schools, sports. No masks. No social distancing.”

Wearing a polo shirt featuring a U.S. flag and the Lincoln Memorial, Terry Rapoza, a leader in the State of Jefferson movement, turned to the crowd, most of whom stood because the seats had been removed.

Rapoza read a statement that he helped prepare for the self-proclaimed California State Militia that business owners were starting to place in their windows. The businesses, it says, “are protected” by the militia, and any attempt by the government to interfere “may be met with resistance.”

In an interview, Rapoza said that there are still a lot of unanswered questions over what happened in Washington but that “we did it the right way” in Redding.

“If a little bit of the rhetoric got rough, big deal,” he said. “They used to beat each other with canes in Congress if someone said something off-color or stupid. For the most part, everyone was pretty level-headed. There’s a lot of disappointment with the people we elected. There will be a recall, and they will be gone.”

A disabled Army veteran who served in Iraq, Fairfield said he believed that the presidential election had been stolen and that elites, including local officials, were profiting off the pandemic while Americans lost their livelihoods.

Among the groups putting pressure on Shasta County officials — the State of Jefferson movement, the Redding Patriots, the Open Shasta Coalition, the California State Militia — Zapata has become a favored voice since his August speech at the supervisors’ meeting, which has prompted multiple appearances on Alex Jones’ Infowars.

Zapata is an active member of the militia and was a longtime Democrat who became a Republican to vote for Trump. He said he is weighing whether he should run for office himself, as a third-party candidate.

The son of Peruvian immigrants, he raises rodeo bucking bulls on 10 acres in Palo Cedro, just up the road from the late country legend Merle Haggard’s ranch. At his home last week, he said that politicians should have a “healthy fear” of their constituents and that the line between a threat and a confrontation is a fine one.

If county officials lock the buildings in the future, he predicted, people will march in, and they will have armed militia guards outside.

“Without the threat of physical violence, our words are empty. We have no teeth to our message,” Zapata said. “By calling for violence, am I saying, ‘Hey, let’s go kill people?’ Absolutely not. And I never have. I’ve been misquoted there. But I am saying that we’re at the point now where we have to consider the threat of violence to protect ourselves.”